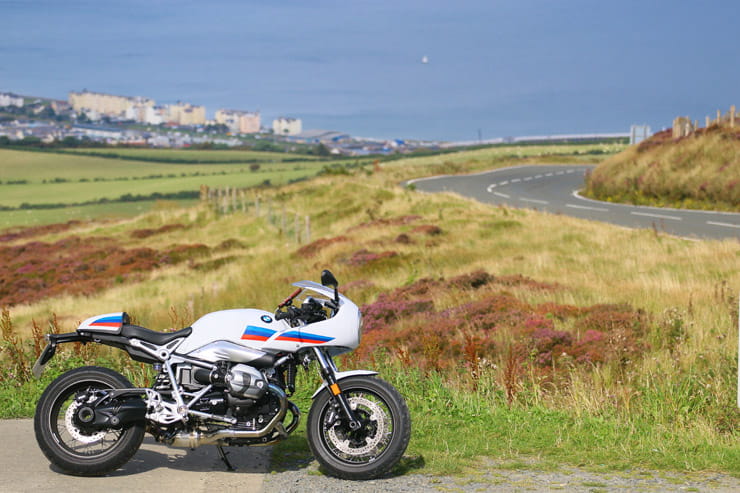 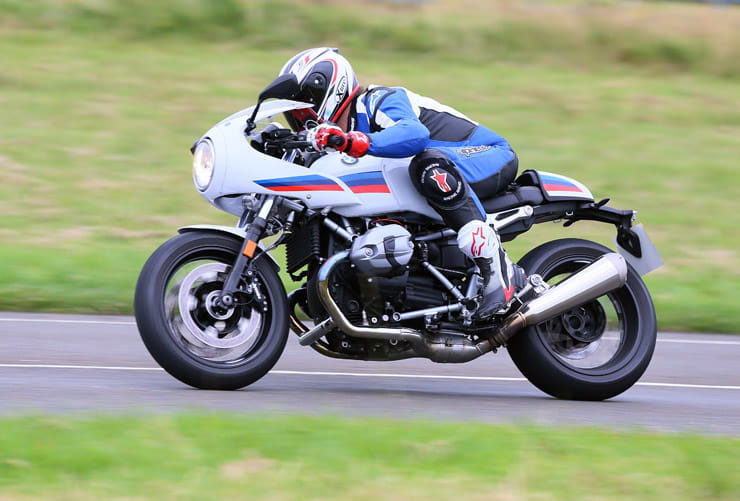 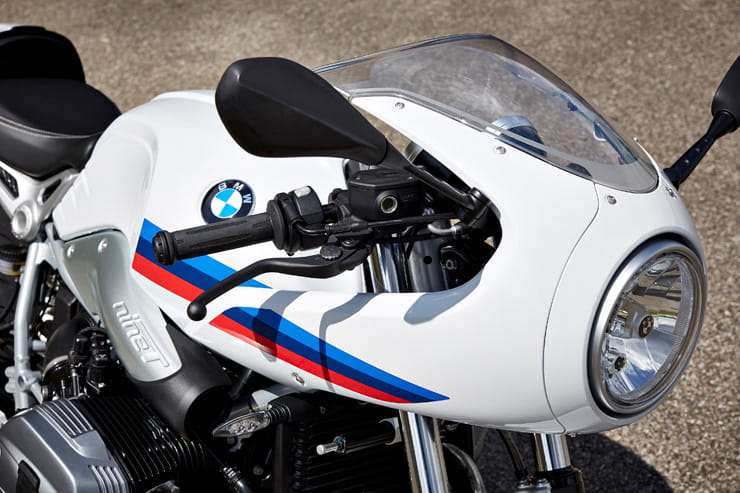 The beardy gent in the black Scott leathers peers forward, while his mate bends over and jabs a finger into the BMW R nineT Racer, parked alongside the BikeSocial stand in the Isle of Man Bennetts Classic TT paddock. These are not the first people, in the last three days on the island, to point and ask; in a quarter of a century of flouncing about on shiny new bikes I don’t think I’ve ever ridden one that’s attracted more attention, had more questions posed and turned more heads. And, over here at the Classic TT, the island is chock full of stunning vintage machinery you’d think more worthy of interest than a 2017 BMW flat twin. 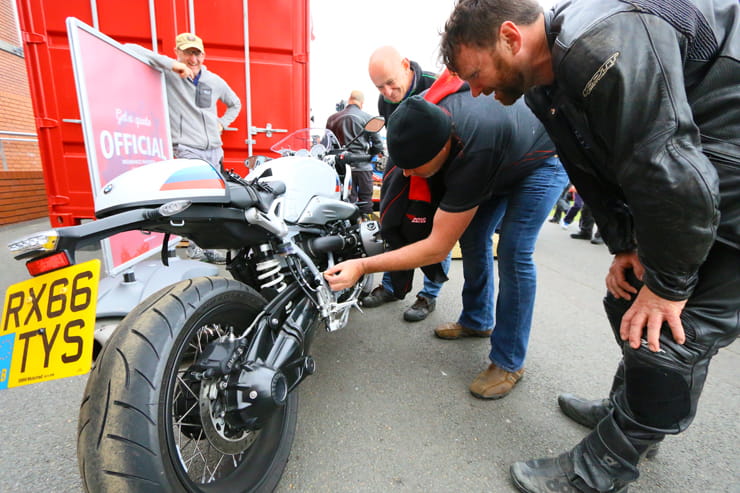 Besides, it’s not like the R nineT Racer is BMW’s first heritage model – this is the fifth iteration of the platform; we’ve had the original R nineT, the Pure, the Scrambler and the Urban G/S. All five use broadly the same 110bhp-ish, air-cooled, 1170cc flat twin motor that, until it was replaced in the modern bike line-up by the liquid-cooled boxer engine in 2012, was the driving force behind BMW’s post-millennium range. It powered the first adventure R1200GS in 2004, the touring R1200RT, the naked R1200R and the R1200S sportsbike (plus its Boxer Cup rep special edition).

So it’s fair to say the Racer’s motor has some hefty historical mileage on it; it’s so familiar there are BMW technicians in dealers up and down the country who can strip them with their eyes shut and hands tied behind their backs. It’s about as mechanically durable as they come, and is so thoroughly developed the only thing left is for BMW to sell as many as they can before Euro 5 cans air-cooling for good in 2020.

The Racer – and the other heritage models – has a conventional front end; forks only, so no Telelever here. The original R nineT has usd forks; the others, including the Racer, are unadjustable rwu teles. A Paralever shaft handles the Racer’s rear end, with adjustable rebound and preload. They’re pretty basic springs, and so are the electronics – the Racer, like the other R nineTs, has the option for BMW’s rudimentary traction control system, called ASC (Automatic Stability Control), but there’s no funky riding modes, no ESA electronic suspension option, and no quickshifter. Boo.

And so, with nothing particularly interesting on the spec sheet, why is the Racer attracting all this fuss?

Simple. Because it looks so good you could eat it. 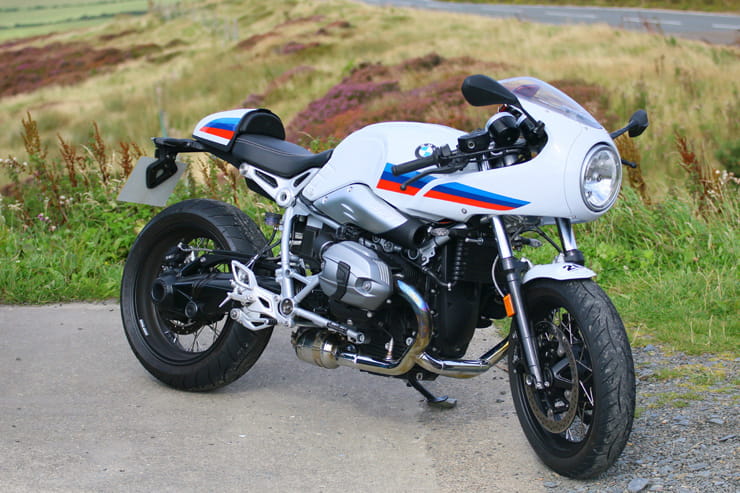 There are very, very few new bikes that pull you up immediately with just how sweet they look – which, in itself, is a pretty astonishing realisation when you think about how obvious it should be. Shouldn’t every new bike at least try to be drop dead gorgeous? And how many succeed? Does anyone think the stylists responsible for, say, the Yamaha MT-10, Honda VFR1200, Kawasaki Z1000 or Suzuki GSX-R1000 stood back, looked at their creations rolling off the production lines and contemplated a place in the Guggenheim? I suspect not.

Yet shouldn’t that be their aspiration? Is it just me, or does anyone else feel cheated by 30 years of mostly complacent, average, bargain-basement motorcycle styling? Maybe plain is cheaper than pretty.

Anyway, owners of the R nineT Racer can at least be safe in the certainty theirs is one of the very few modern motorcycles that looks truly elegant. From the classic nose cone fairing sweeping back from a big round headlamp across a handsome metal fuel tank to the solo seat hump, all drenched in ice white with the stylish blue and red Motorsport swoosh – there’s a sparse, simple, organic flow to the bike that stops passers-by in their tracks and, it must be said, makes you feel like a discerning dude just by riding it. If you want to look sexy on a bike, the R nineT is the default new bike choice.

And the Racer’s coolness is more than skin deep; BMW are good at making the bits you spend time looking at, at least appear high quality. Paint and plastics are solid and ooze class, the cockpit sits atop a cavernous space behind the headlamp, supported by a Forth Bridge brace of tubing and drilled metalwork. A pair of plain, round analogue dials, with wires and cables routed neatly, perch above nicely turned fork caps and top nut; everything meets the eye tidily.

But, a few days earlier as I stand back and contemplate exactly how to attach luggage to the Racer, the price of its cool, trendy retro styling becomes clear; it might look a million dollars but there’s nowhere to carry anything. The retro racer seat hump cleverly opens via flap to reveal enough space to cram a pair of waterproof trousers, but that’s your lot. Uniquely for a BMW, a top box and panniers aren’t available in the accessories catalogue (Hipster leather side bags and tankbags only). So although your average Japanese bike looks like an explosion in the manga section of a Mattel factory, at least there’s usually somewhere to strap your shit. 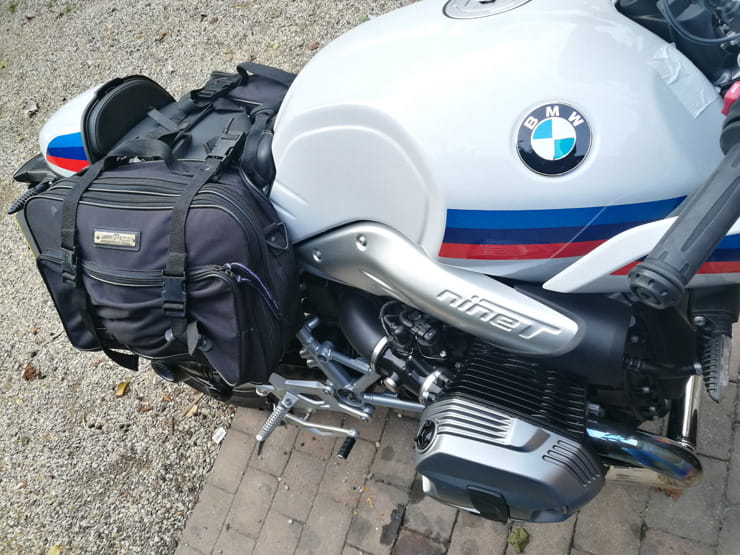 In the end I connect a pair of vintage Moto Fizz throwovers to the seat, with barely enough clearance over the rear tyre and exhaust. It also means I have to sit on the straps and contort my legs to reach the Racers’ rearsets.

This makes an already borderline riding position properly uncomfortable. Unencumbered, the Racer’s set-back pegs (around three inches behind and an inch higher than, say, the stock R nineT) and clip-ons are extreme – but not, if you’re familiar with a sportsbike position, potentially crippling in the same way, say, Yamaha’s XSR900 Abarth or Ducati’s Paul Smart 1000 Sport Classic are. For some reason BMW used a very small person for the Racer’s press shots, which made it look like Game Of Thrones torture device; for normal humans, the Racer’s riding position is no more radical than a Fireblade. 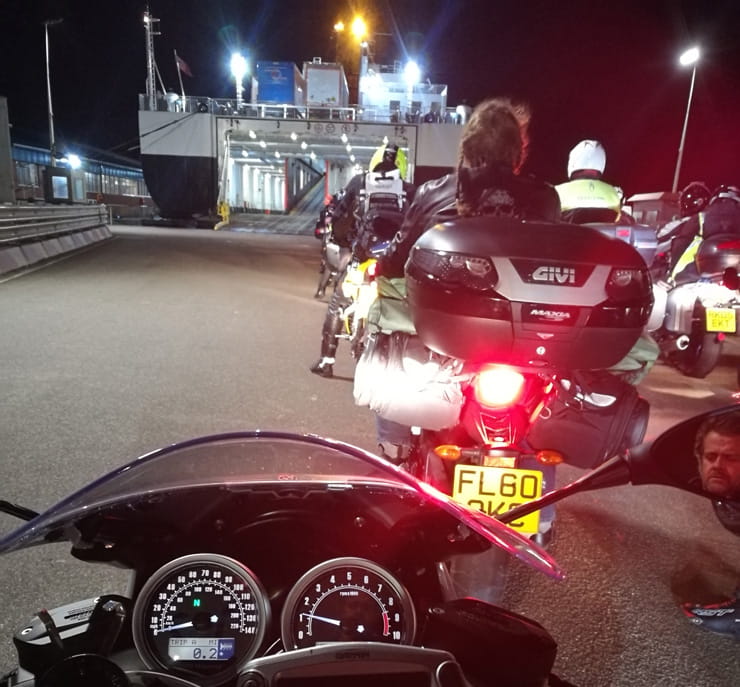 With the Racer loaded with pants and socks, we thrumble off at late o’clock for the port of Heysham and a 2am, four-hour Steam Racket passage to Douglas, IOM. The less said about the midnight motorway schlep the better; the Racer covers 150 miles between stops, which is about right for a recuperating stretch at a sodium-lit oasis of petrol and coffee for the nocturnal traveller. The BM’s motor thrums and shudders happily, feeling a little stretched at 90mph, but with plenty of top end under its slim, heated grips (£250 extra).

After docking and disgorging (nautical euphemism) by around 6am, my bum has recovered enough to allow the Racer to get its first early morning lap of the TT circuit. 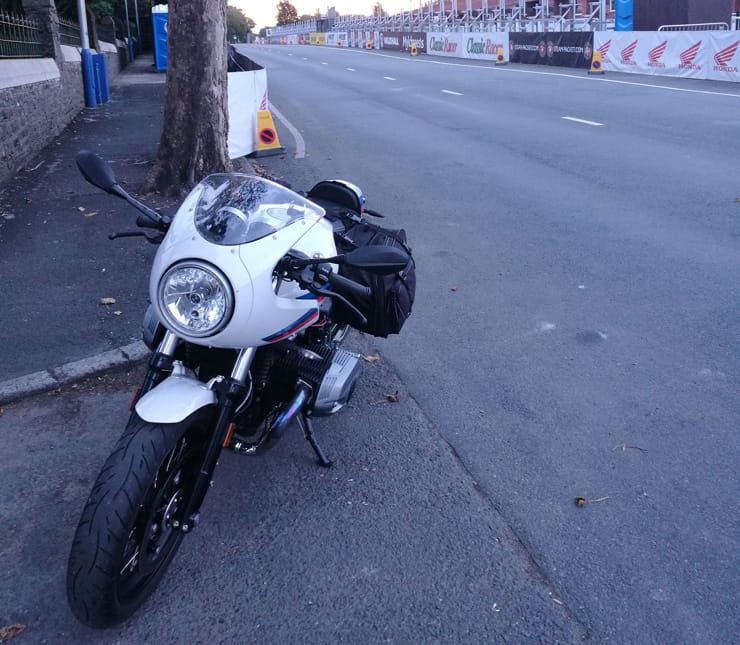 Even at dawn the island’s rigidly enforced speed limits still apply and, although trundling along through Union Mills at 30mph is not the Racer’s forte, the fat, flat twin motor is lively and flexible, slapping the chassis to the right as the bike tries to flip itself around the counter-clockwise rotating crank. This isn’t a highly-strung motor; it’s happy lugging about at low speed, short-shifting through the slick box with a wobbly, lumbering gait like a wildebeest galloping in slow motion. It’s an engine that blunders happily along, with its two pistons permanently high-fiving each other and missing.

Right at the crossroads at Ballacraine, the Racer gets its first chance to open up a little through Glen Helen’s 60mph sweeping lefts and rights. The smell of wild garlic hangs heavy in the still morning air as the BM’s weighty, long wheelbase steering and drawn-out riding position plots a path between damp stone walls and mossy rock faces. Controlling the R nineT Racer is a pre-planned, steady-away affair; point-and-squirt is best left to the audience. The bike doesn’t have a sharp end but does have a steering damper; it turns from the shoulders with a calculated, measured heft – but it holds its line and can be braked gently mid-corner for course correction without drama. The slippery, damp camber at the right-hander at Sarah’s Cottage drops away sharply and, unless you’re racing and apexing against the verge on the right (wrong side of the road) you’ll want to peel in much later than you think. I never get it right and roll it off every time; I expect the Racer to pull me out wide but it stays implacably on line without fighting back.

As Cronk-y-Voddy opens up, so do the BMW’s taps. The exhaust-can, mercifully neat and tidy, thumps an eager response as the chassis shudders and judders. Speed accumulates around the Racer as if drawn by gravity, propelling it rather than accelerating. Within short order the speedo has navigated to the 140mph mark on the far side of the dial, which is handily quick. Is this really legal? Tucked in behind the Racer’s generous screen, my head is assaulted by face-melting vibes emanating from two great battering gobs of piston mass vying for supremacy downstairs. The BMW’s mirrors, perched precariously on long stems, blur the past into a Turner-esque haze of colour. I’m not sure how authentic the sensation is; there should probably be more oil mist on my boots; but it feels fantastic.

Around the stone wall at Handley’s, the drop down Barregarrow – as we pummel towards the dip, the Racer strays briefly onto the opposite side of the road, forks compressed solid, brakes juddering over the bumps and ripples. Excellent anchors on the old boat and the excellent Metzeler Roadtec Z8s do a sterling job of sticking, but everything has a limit; and this is where it is.

The pace lets up on the run into Kirk Michael (two words, not one); after all that, 30mph through the village feels like walking pace. Steady away past Rhencullen and Alpine, then bounce over Ballaugh Bridge, onto Sulby, then Ginger Hall resplendent with BikeSocial banners.

The section from here into Ramsey is a bumpy old sod, mostly 50mph limit but that’s about as quick as the BMW wants to go, threading between black and white kerbing and the dotted white line. The Racer’s long, low riding stance doesn’t hold back on the shocks; with less suspension available in my folded-up elbows and knees, the Manx tarmac clatters and batters through the BM’s flat seat and bars. It’s a bit of a pounding; like mashing spuds. Literally.

After a quick brew in Parliament Square, the Bimmer hares off up to the Hairpin – morning, officers – and then to the Mountain. There’s no mist, but the warning notice reminds the Mountain is two-way for the Classic TT.

On the smooth tarmac and long, high-speed corners up across Snaefell, the Racer is at home. It pings back and forth past Guthrie’s, bellows across the Mountain Mile, arcs around the Verandah and rips around the Bungalow like a supercharged tram. It’s windy at Windy Corner, but the BMW charges through at an equal rate of knots. This is where the Racer really shines – fast enough to trouble the rev limiter, focussed enough to stimulate the heart-rate, and all the while radiating mechanical sensations of combustion and kinetic energy.

After all that, the roll down to the Creg and back into town is positively sedate; breath back, lowering adrenaline, calm down, and relax. 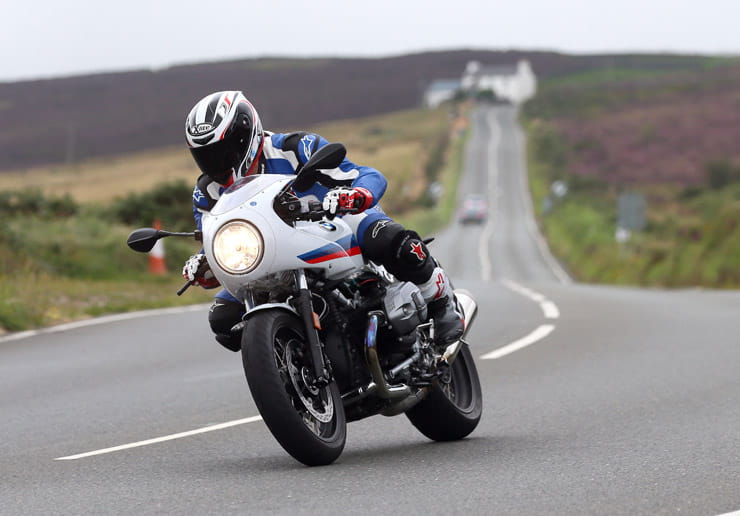 Back at the Grandstand, Douglas is stirring. Bacon sizzles in the morning air, triggering a primitive urge to feast on slices of dead pig in a bap. I park a hot, pinging R nineT Racer against the Bennetts stand, and watch as paddock passers-by ignore the Suzuki Katana racebike and mint, restored GSX-R750F in favour of poking fingers at the BMW. Only the arrival of John McGuinness draws a bigger crowd. And that feels about right.