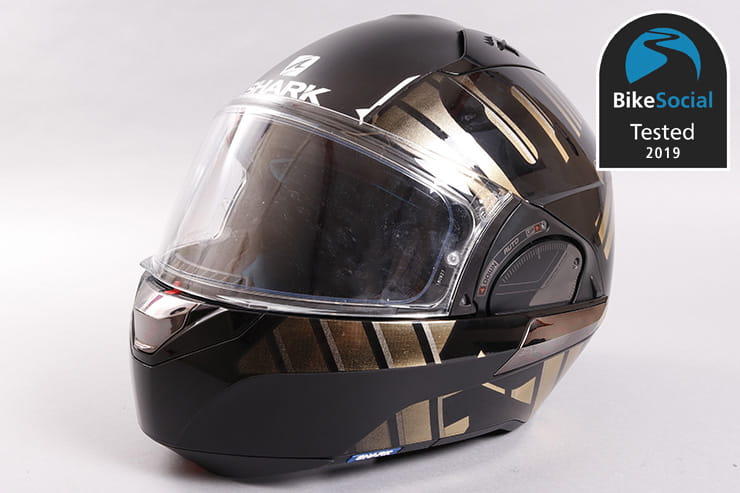 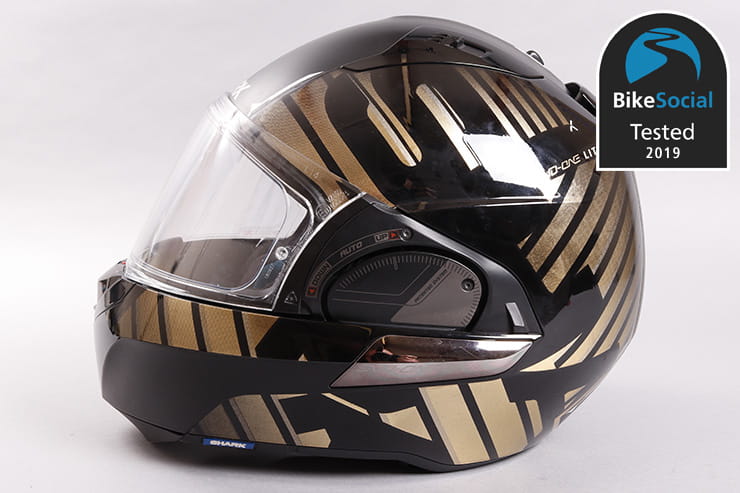 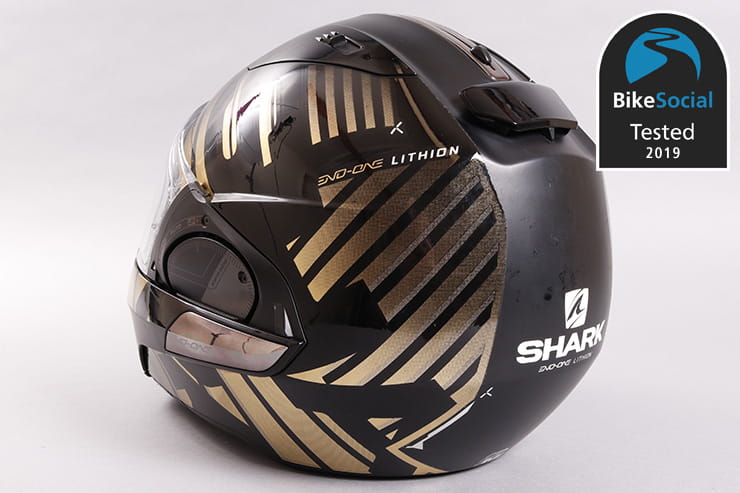 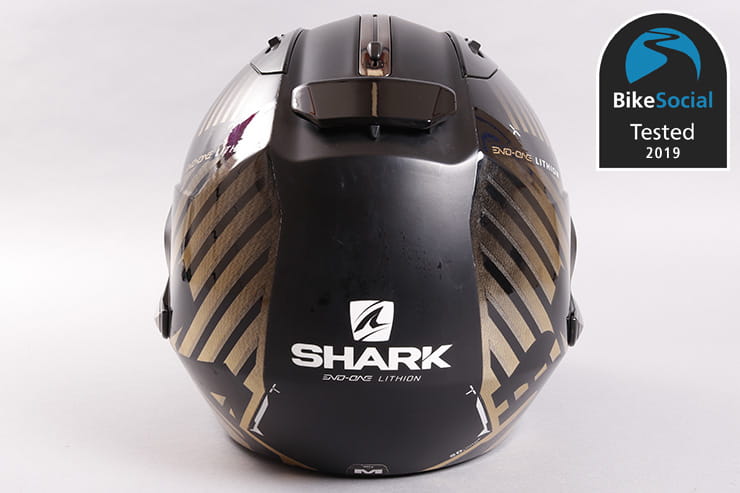 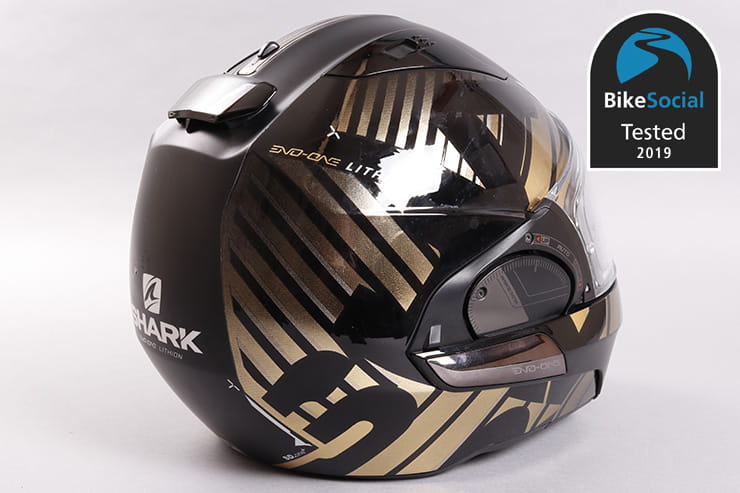 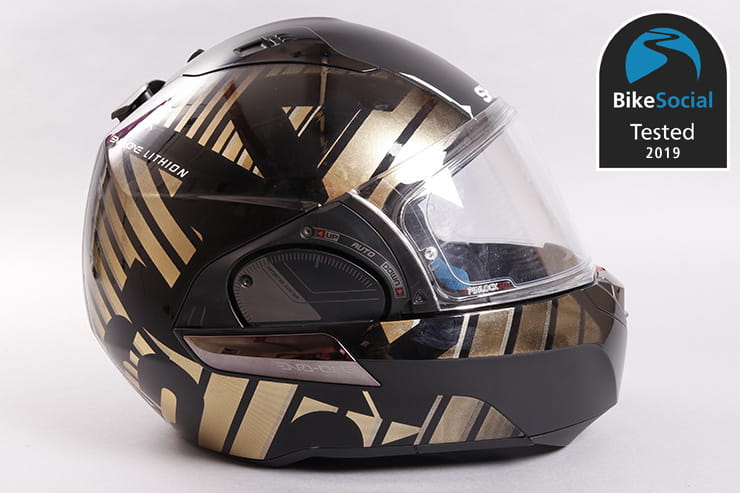 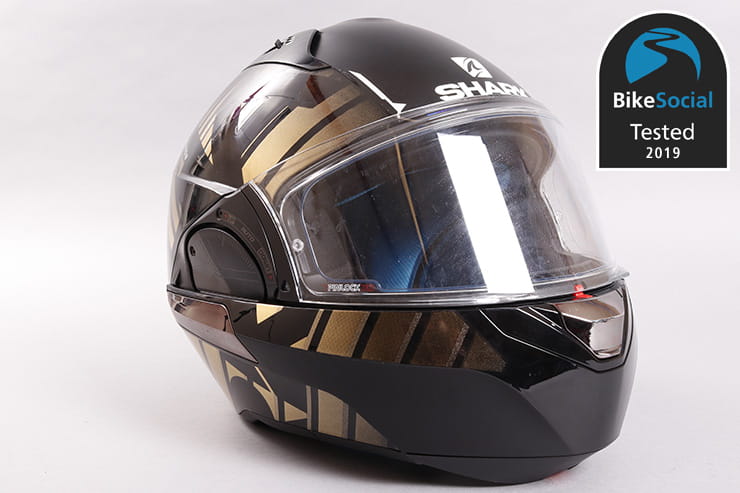 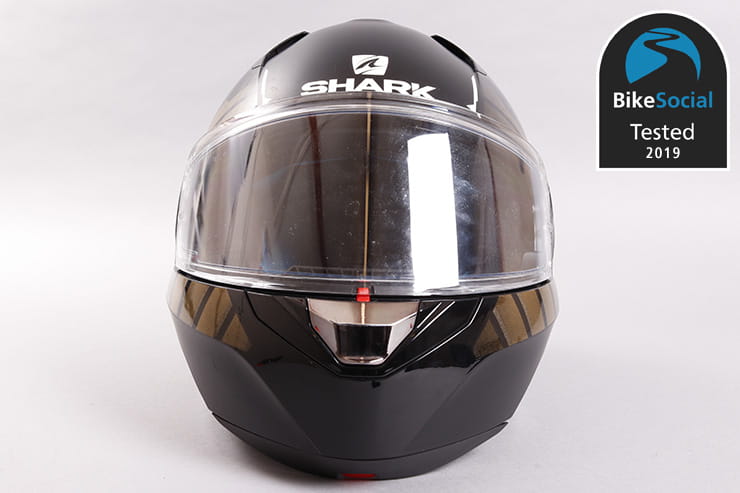 A flip-front motorcycle helmet can offer touring and every day riders unparalleled levels of versatility; the Shark Evo-One 2 reviewed here – with its distinctive full flip design – takes it one step further.

I’ve used the Shark on a variety of touring and sports bikes – including a Yamaha MT-10, Honda CBR650R and a KTM 1050 Adventure – for several months in a variety of conditions…

The Evo-One 2 has two sizes of outer shell used across the XS-XL range. Made of injected thermo plastic, I’ve been testing the ‘Lithion Dual Kuq’ design, which retails at £399.99; the gold graphics, while having a relatively coarse halftone screen (the dots that make up the shaded colour), are well applied with a deep gloss over the top.

The centre section of this helmet is a matt black that doesn’t mark easily, with gloss black plastic vents and rear spoiler.

Neat touches add premium feel – like the dark chrome panels on the chin arms with ‘Evo-One’ written as an ambigram (so it reads either way up) – but the flip operation feels and sounds a little cheaper than some, admittedly more expensive lids. The chromed plastic has also discoloured a little, developing something of a posterised bloom, despite no cleaners being used on it.

The main feature of this helmet is the chin section, which flips all the way around to the back, so you get none of the drag associated with most ‘normal’ flip-fronts when riding with the mechanism open; the chin isn’t heavy, so you have all the feel of an open-face helmet.

The Evo-One 2 is dual-homologated, which means it’s legal to ride with it open or closed. 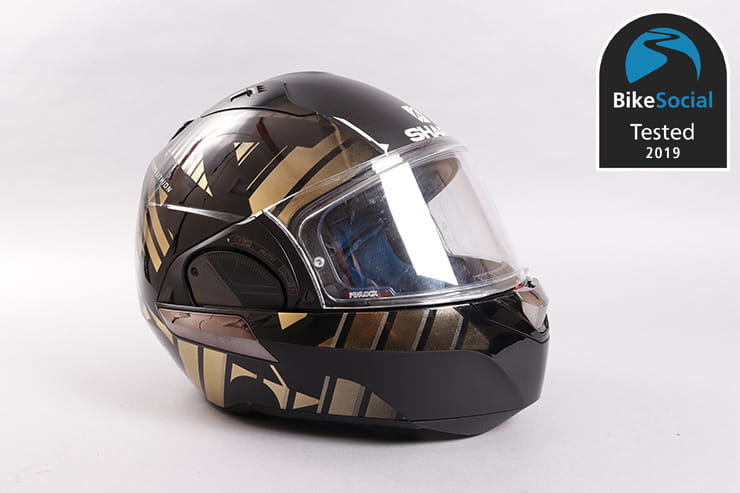 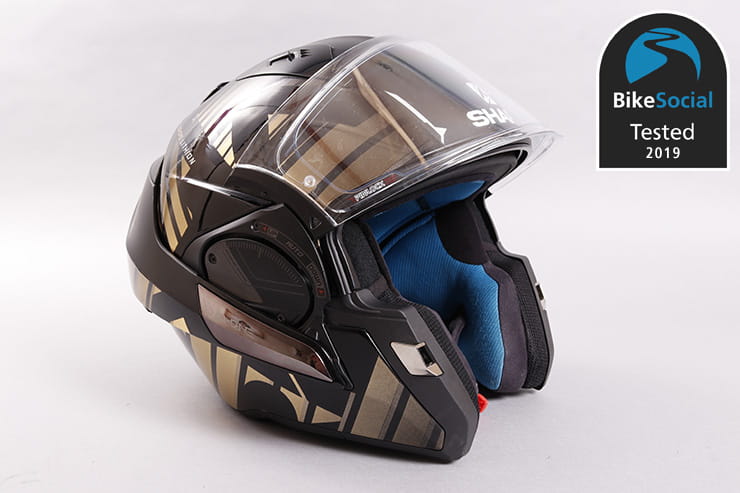 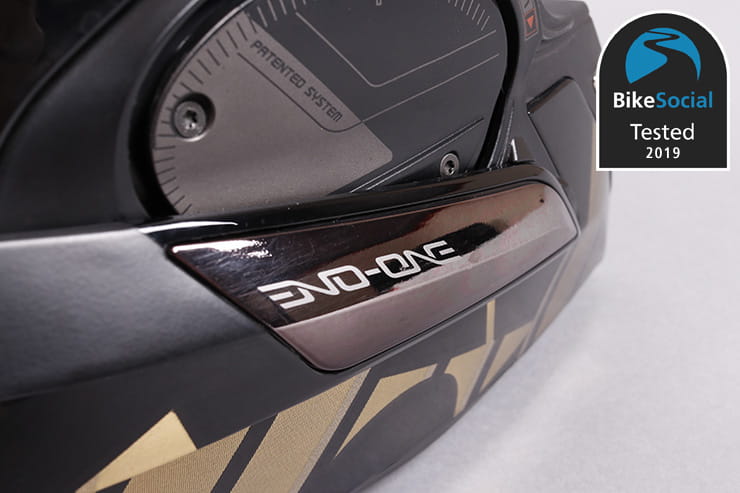 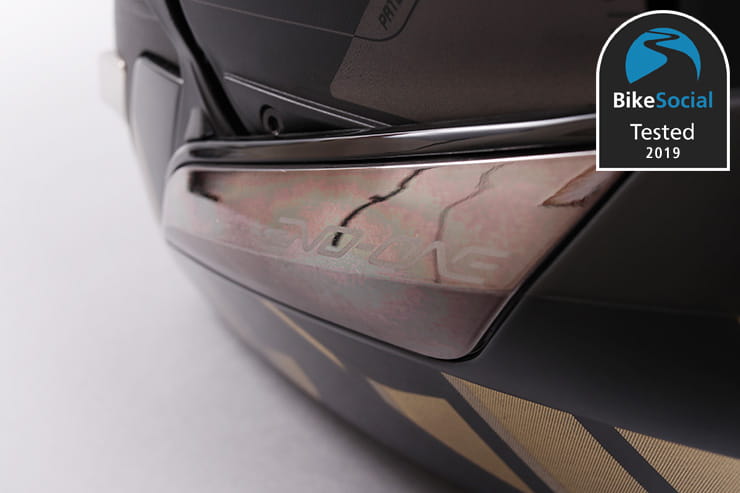 Some flip-fronts can’t legally be ridden in the open position, usually because the chin doesn’t lock strongly enough open – the original Shoei Neotec is a good example (the new Neotec II is dual-homologated), though most owners (including emergency services) still used them open at times.

The chin section is released with a button on the front, and latches in place at the back. To bring it to the front again, you just need to lift it from the centre and roll it over. It can be tricky at first to get it to latch securely at the front; it’s important that you slide it down, then press down and back towards your face at the centre of the chin, just below the visor aperture. If you try to do it any other way, one or both of the sides can fail to latch.

It’s quite disconcerting when riding and you realise you haven’t shut it properly, but with the right technique it’s fine. Compared to some other flip-fronts, it’s less slick, but try one (with it on your head) in store and you soon get the hang of it.

My medium-sized helmet weighs 1703g – that’s a shade under the 1707g Schuberth C4, and a little heavier than the Shoei Neotec. You can feel the weight when you pick it up, but certainly not when you’re riding. 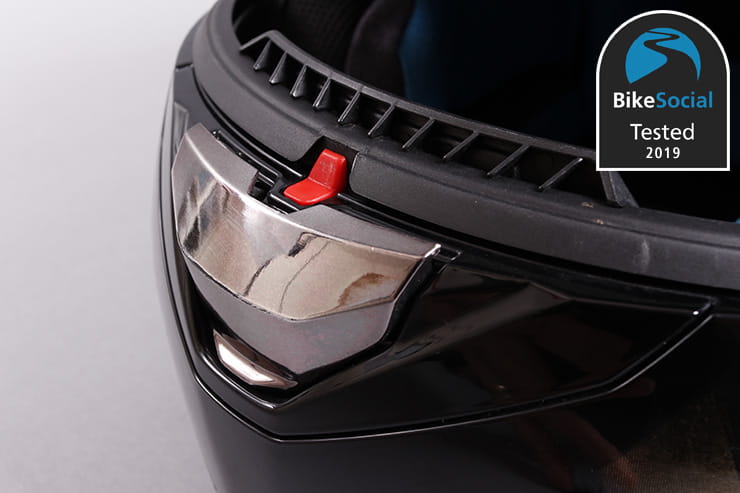 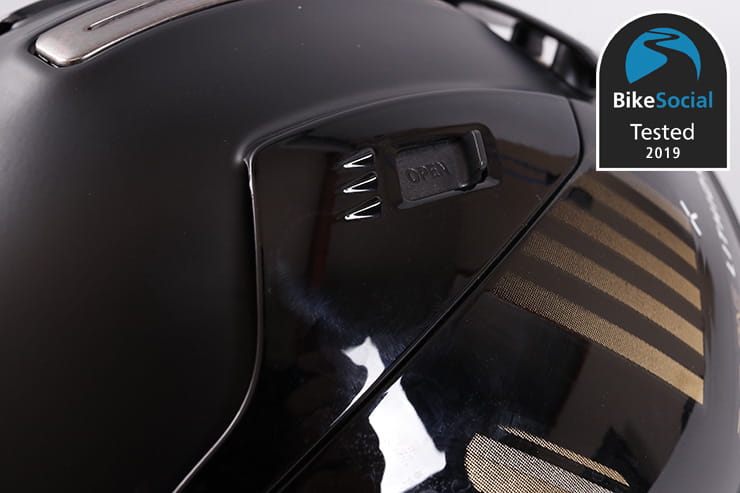 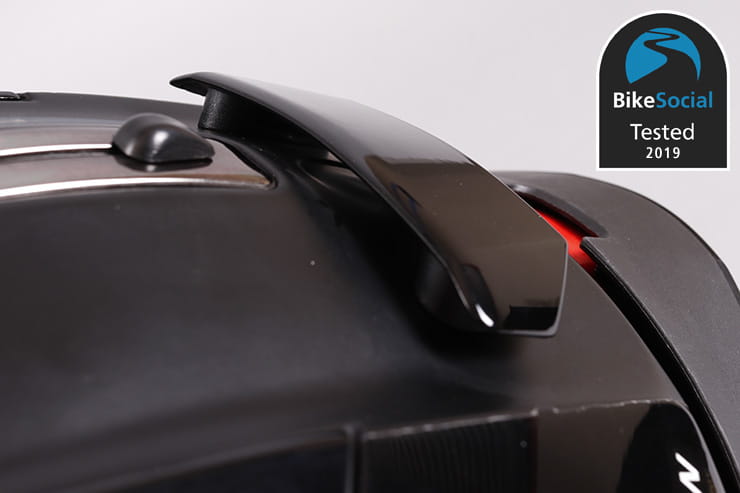 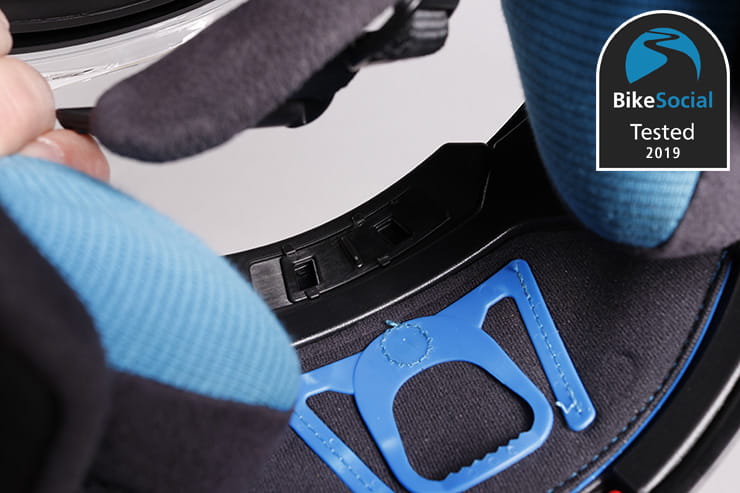 The Evo-One 2 has a chin vent, and always-open exhaust vent on the top, along with a pair of independent top vents that are set a couple of inches in front of the exhaust.

Deep channelling inside the liner helps draw air through the lid, but the close proximity of the top and exhaust vents means there’s no air flow towards the back of the head – it’s a limitation of the flip design, which sees the chin bar covering the rear portion of the helmet. Of course, being a flip-front, you can have the Shark open when things get really hot, and the Evo-One 2 really is a lid that excels at being totally usable as an open-face, where others are more of a compromise.

The chin vent has a short travel, so feels a little vague when wearing gloves. It doesn’t give a huge blast up across the visor, but there’s a second sliding vent on the inside, which allows air to pass to your upper lip and nose, for more cooling in summer; you can easily operate this vent with the helmet on by opening the visor and reaching down, though be careful you don’t push too hard and slide it right out (it does pop back in okay).

The Shark isn’t the most still helmet I’ve worn – its fairly airy, so if you’re riding in the cold you’ll likely want to use a Buff.

A curtain is stowed neatly in the chin piece and can be pulled down to create a better seal. This is fiddly when you’re wearing winter gloves – if you have a more prominent chin than me you’ll really struggle – and once out you need to take a second to ensure it’s properly seated or it vibrates in the wind. It certainly makes the Shark more still, but at speed on a bike with no screen, you’ll still have a fair bit of air moving around inside.

The curtain can be tucked back in with the lid on, and it’s important that you remember to do this before opening the front – if you don’t, when you bring the chin section over from the rear, the curtain catches on the visor, pushing it closed and jamming the mechanism; you have to push the chin to the rear before trying again. 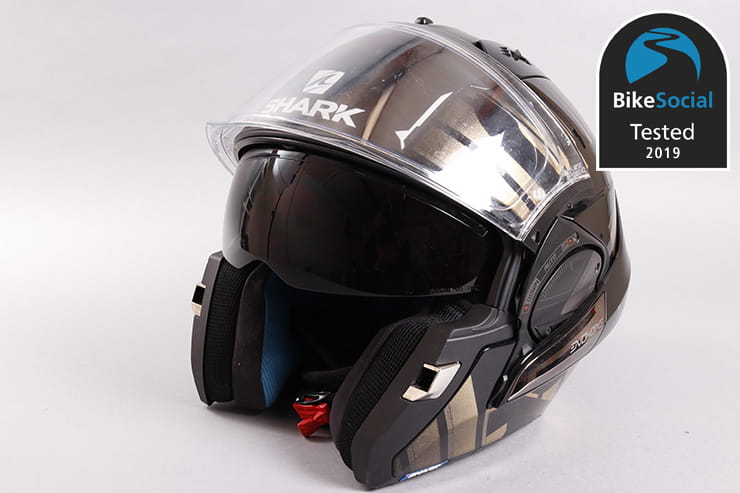 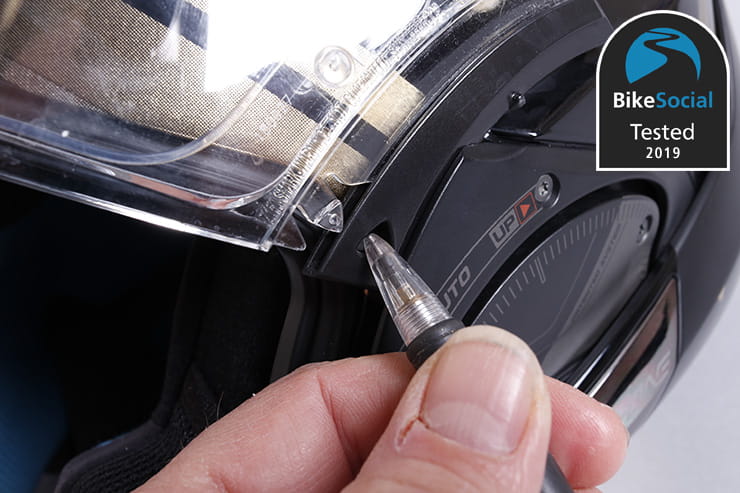 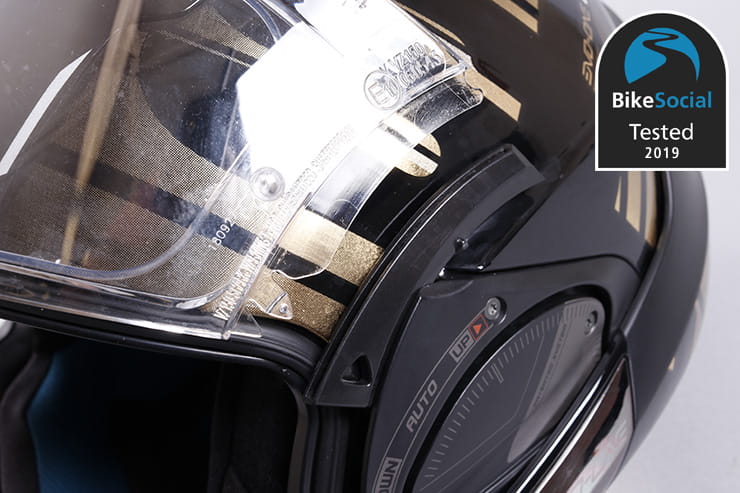 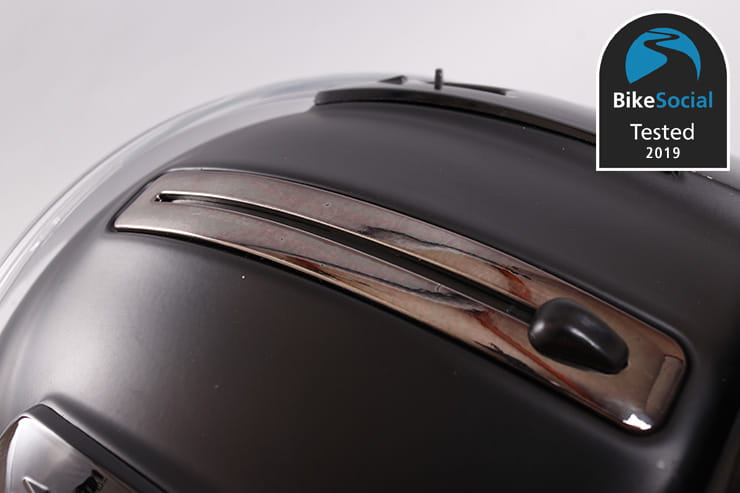 The visor opens automatically as the chin section is rolled back. Equally, if you have the visor down with the chin in the open orientation, the visor will open as you roll the chin around to the front. You’ll need to close the visor again, but it’s a clever mechanism that keeps everything sealed, even in very heavy rain. Sometimes, if you don’t close the chin section smoothly and quickly, the visor won’t open itself far enough and blocks the chin from coming down; it’s easy to reset, but occasionally frustrating, especially at speed.

If you’ve left the chin curtain out (as described above), and bring the chin bar too far down, the automatic visor mechanism fouls, so you need to push the visor up with the chin bar. To be honest, you’ll only do it a couple of times before remembering to tuck the curtain away.

A Pinlock 70 (the mid-range anti-fog insert) is included, and I’ve not had any problems with misting. My glasses are usually the real issue, but as the Evo-One is quite airy, they rarely fog much at all.

It’s a little tricky to get to the first stage of visor opening, as the mechanism requires it to pull forwards first, and it’s quite a wide opening – just under an inch; I prefer to have a ‘just open’ position, but again, it’s not too much of a problem here. There are then around six stages to the visor, which are easiest to locate when closing, rather than opening the visor.

A note in the box say to push the visor down from the centre top to avoid deforming it and the Pinlock rubbing on the shell. This was an issue in the previous model, but there’s a touch more clearance here, and I haven’t seen any signs of it catching. The instructions are supplied on a CD, or can be downloaded from the Shark website – I’d much prefer a printed manual, especially for a relatively complex safety item like this.

It’s good to see a thumb tab on either side of the front of the visor, making it much easier to pop open while at a standstill with the clutch lever held in.

A drop-down sunvisor is operated with a slider on the top of the Evo-One; it’s got a fair bit of travel – enough to touch the end of my nose – but you can easily set it to your preferred position. There’s not much drop below the eyes, so there is a line of light along the bottom edge, but it’s not too distracting. I prefer a dark outer visor when possible, but drop-down shades do help when the light keeps changing, and don’t add further cost.

Removing the main visor is a little more fiddly than some other systems – you’ll need a pen or similar to press the triangle button on either side of the visor carrier before lifting it out, but it is very quick. 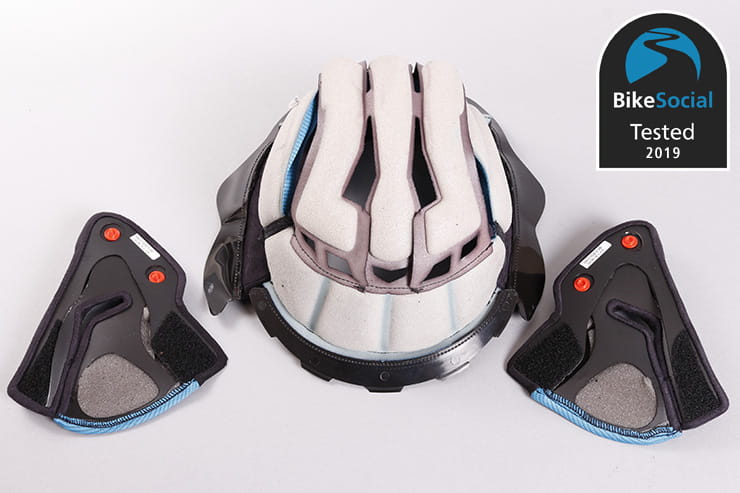 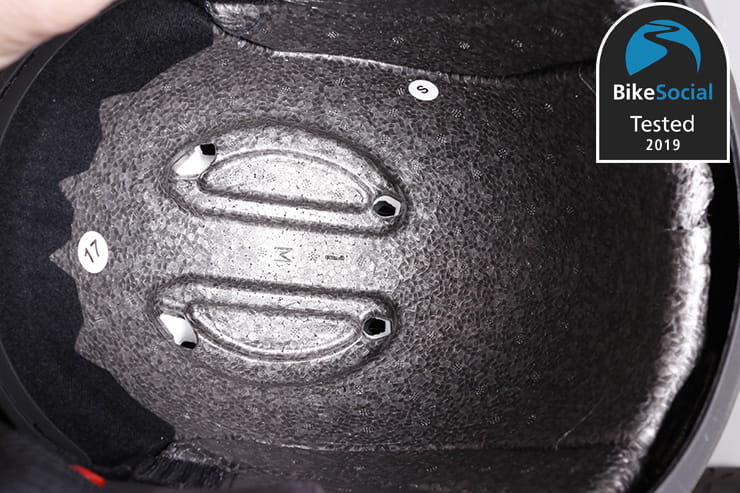 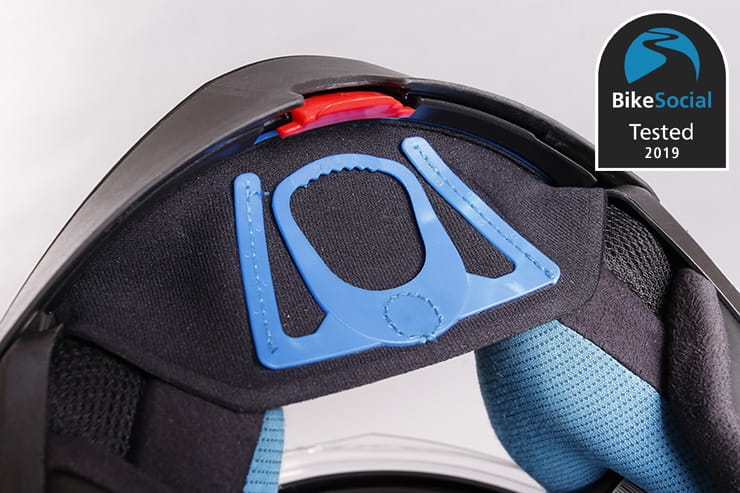 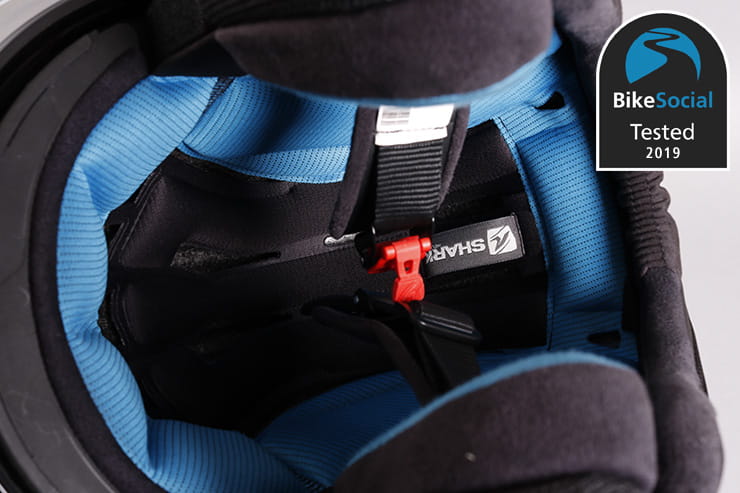 A micrometric strap is fitted – while some prefer a double-D fastener, this ratchet system is quick, simple and reliable – perfect for everyday use as you can operate it with gloves on.

Fit is of course very subjective, and while I find that some models of Shark fit my head while others don’t, the Evo-One 2 is entirely comfortable. I also appreciate the fact that my glasses aren’t pressed uncomfortably into my head. 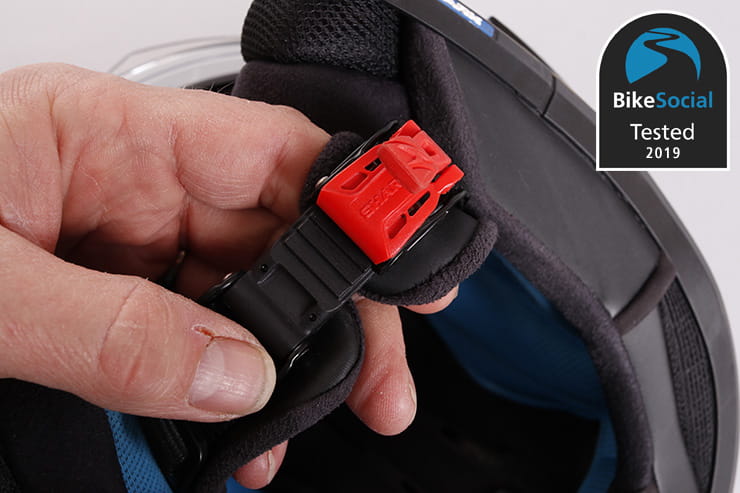 Noise levels are fairly average – I wouldn’t consider the Evo-One 2 to be any noisier than other flip-fronts or most full-face lids. That means that, like every other helmet I’ve worn, earplugs are essential, but I had no unusual levels of booming or whistling with the Shark.

If you want a flip-front lid purely for the undeniable convenience of being able to pop it open when stopping for fuel or talking to people, the Shark is a good option, but some other (often more expensive) helmets might be a little less fiddly. But if you ride with the helmet in its open orientation a lot – perhaps as a regular touring rider in hot countries – the Evo-One 2 really is hard to beat.