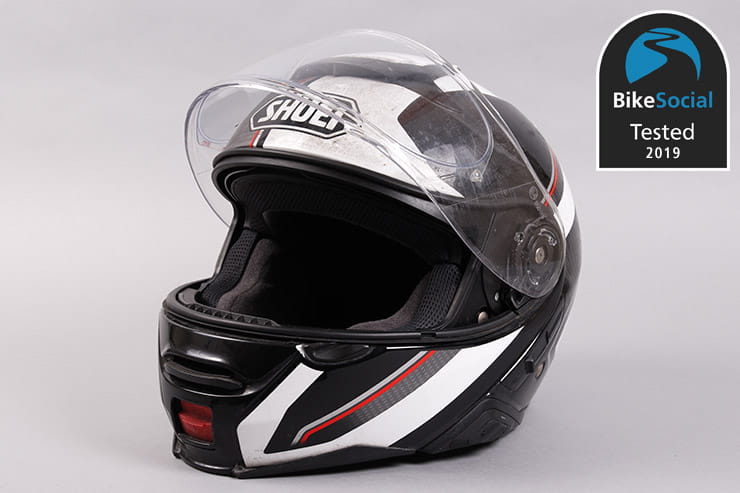 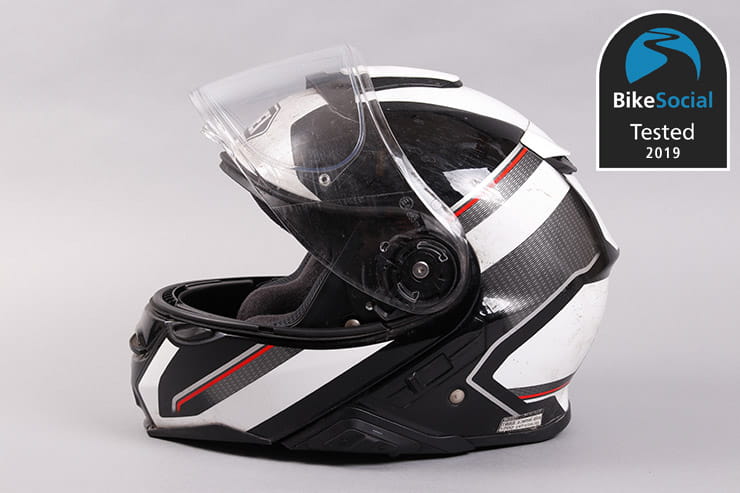 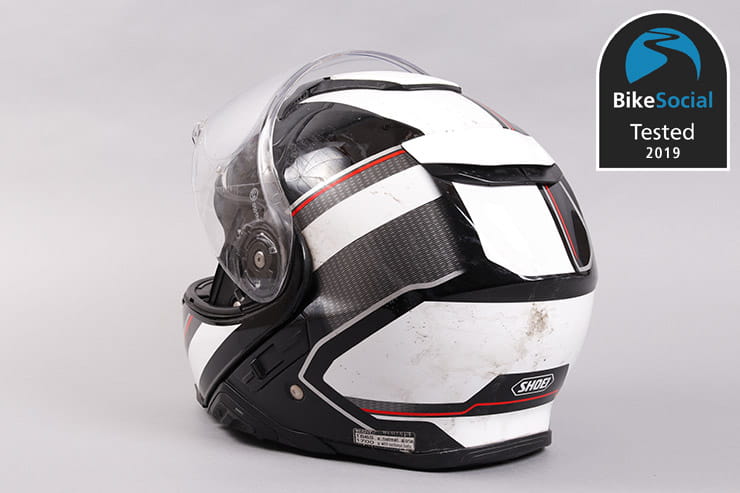 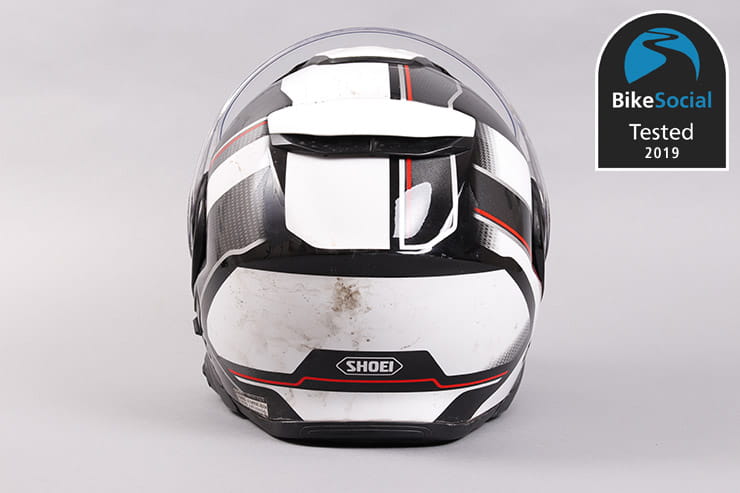 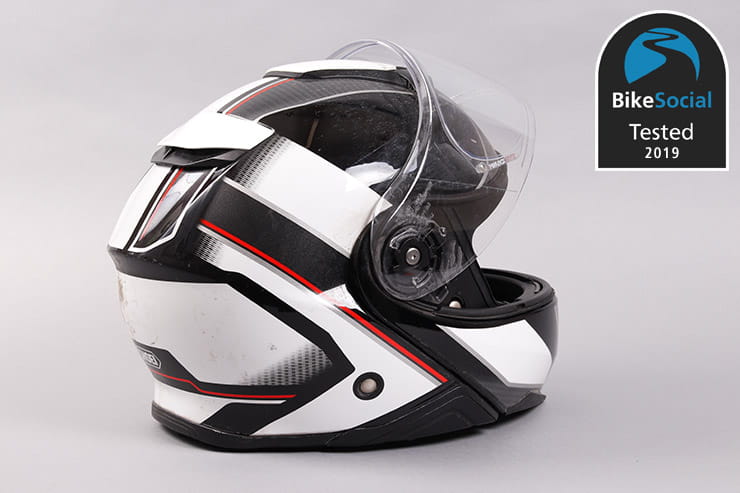 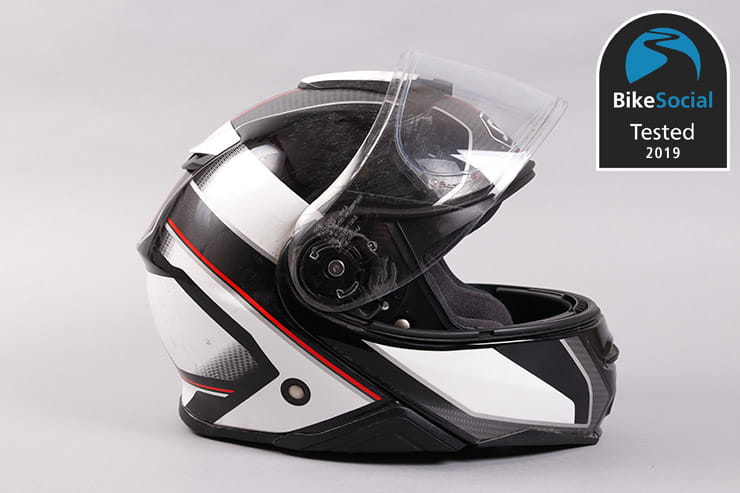 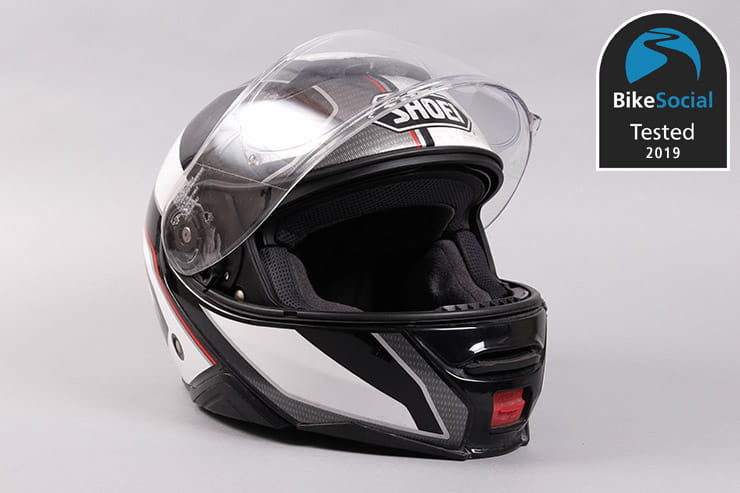 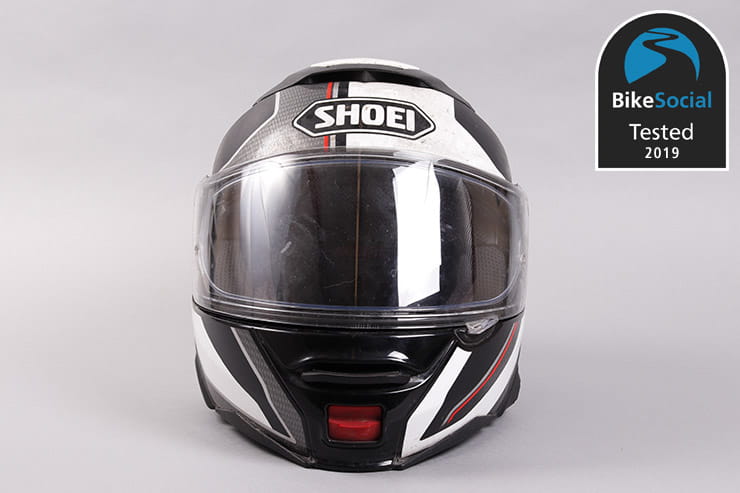 The Shoei Neotec was one of the world’s leading flip-front motorcycle helmets, and this new version takes much of what made the original such a success, then builds on it. This review has been a long time coming, but like the people who’ll most likely be investing in the Neotec II, I wanted to put plenty of miles in with it.

I’ve worn this Shoei almost every day for more than a year now, on bikes as diverse as scooters, sportsbikes, tourers and adventure machines. I’ve ridden in blazing heat, pouring rain and deep winter cold to find out whether it’s worth the investment, or if you should upgrade from the original… 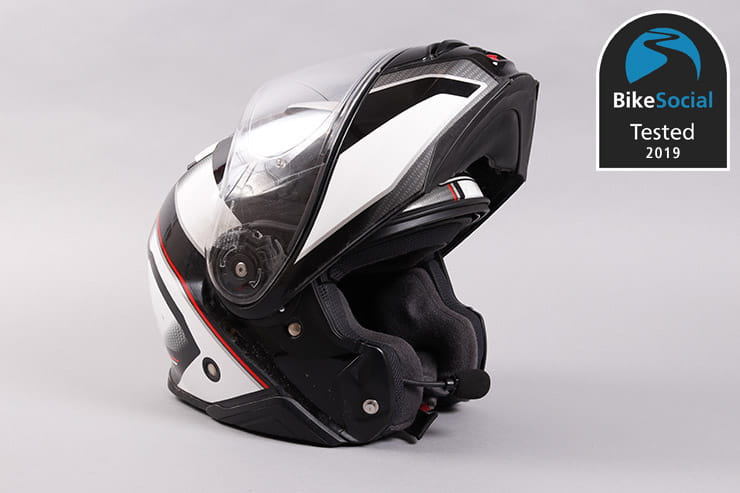 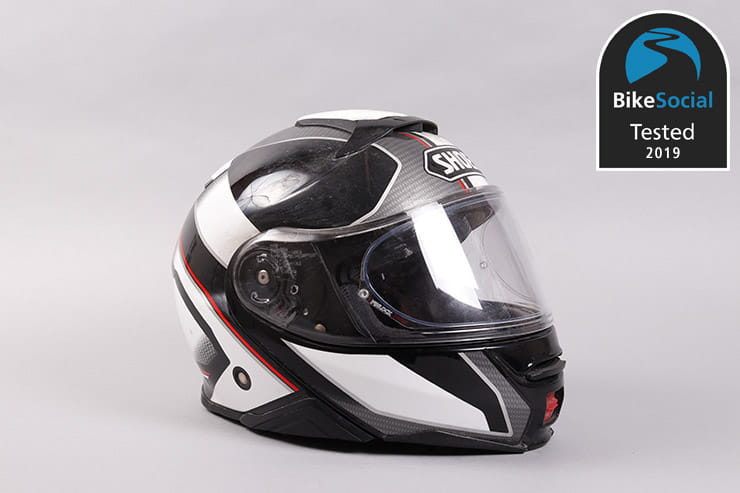 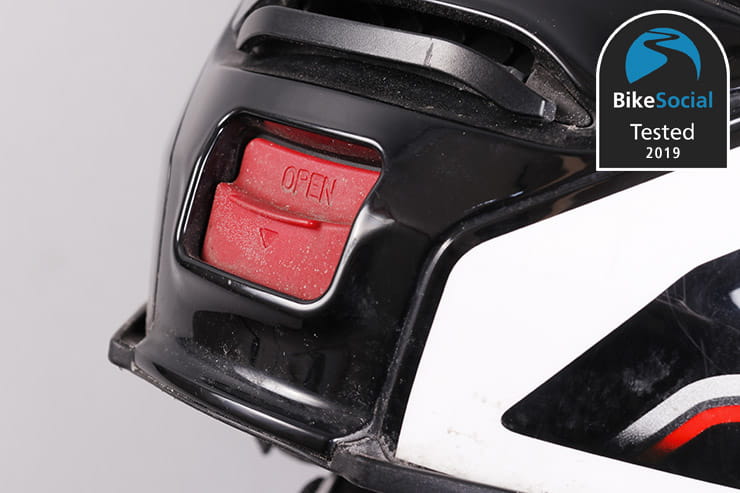 While a white Neotec II costs £519.99, and plain colours are £549.99, the ‘Excursion TC-6’ I have is £599.99. The multi-composite fibre shell has an excellent finish, which has stood up well to all weathers; it’s been left several months in a frankly grotty condition, but always cleans up very well.

Three outer shells are used across the size range, so someone with a small won’t have to put up with a massive helmet that’s got to accommodate an XXL head.

Weighing 1736g with the dedicated Sena SRL intercom system fitted, it’s 45g heavier than the previous model (also with its own, dedicated intercom). It certainly doesn’t feel heavy, and compares well with helmets like the 1707g Schuberth C4. 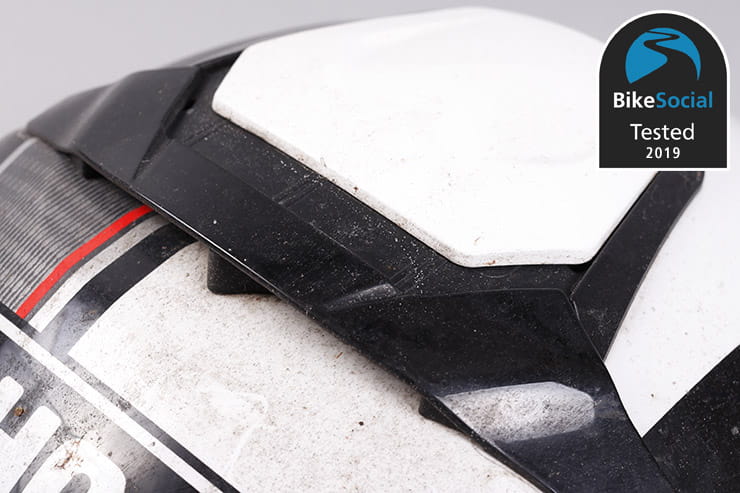 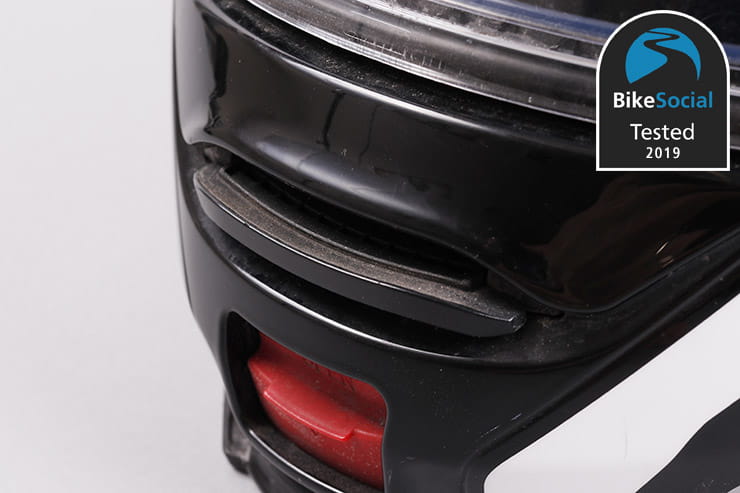 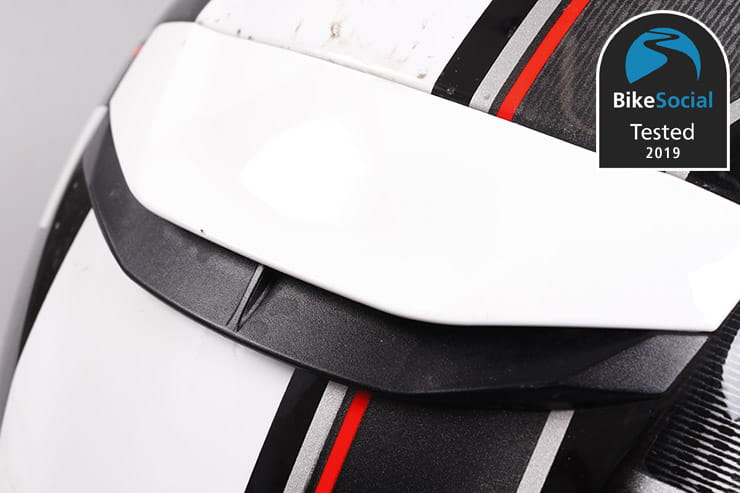 The chin vent, single top vent and always-open exhaust work together to give very good ventilation when open, but close them up and the redesigned, exceptionally well fitted neck skirt makes for an extremely still helmet; it’s one of the most still I’ve worn.

Wearing glasses, I need to keep air moving in my lid during the cold (my lenses have an anti-reflective coating, which makes anti-fog coatings go smeary), so tend to ride with the visor just cracked open in winter, or the chin vent open. The visor needs to be latched down properly in pouring rain of course, but unfortunately the new-design of chin vent lets water droplets spray too easily into the helmet and up the inside of the visor. I’ve now bought a cheap pair of glasses with no coating on, so I can put an anti-fog treatment on them to prevent misting in bad weather. Ultimately, while other lids don’t let water in through the chin vent, they also don’t tend to let as much air in, so I still have to ride with the visor cracked, which lets in water; the new specs were needed for riding in any helmet.

The top vent doesn’t have the lip on it that the original Neotec did, which makes it harder to operate. And when it gets dirty, it’s even more stiff. I’ve also found that the two entry ports that feed the two holes in the helmet (the original also had two holes, but access to them was through a wider opening) are more susceptible to a build-up of large, dead flies.

For maximum ventilation, you can of course ride with the chin section up. While everyone who used to own a Neotec also did this with no problem (including police riders), the Neotec II is dual-homologated, meaning it can legally be ridden with the chin bar open. To do this, the chin must latch securely in the up position, but as it feels no stiffer than the old Neotec, there’s no disadvantage.

In the summer, the Neotec II can feel almost too still at times, when riding a bike with a large screen that blocks the vents; fortunately, removing the chin curtain allows a lot more air to move around in it.

Compared to the previous model, the top vents feel quite similar in use, but the chin vent manages to focus the air more to your brow – I found the original Neotec blasted my eyes a little more. 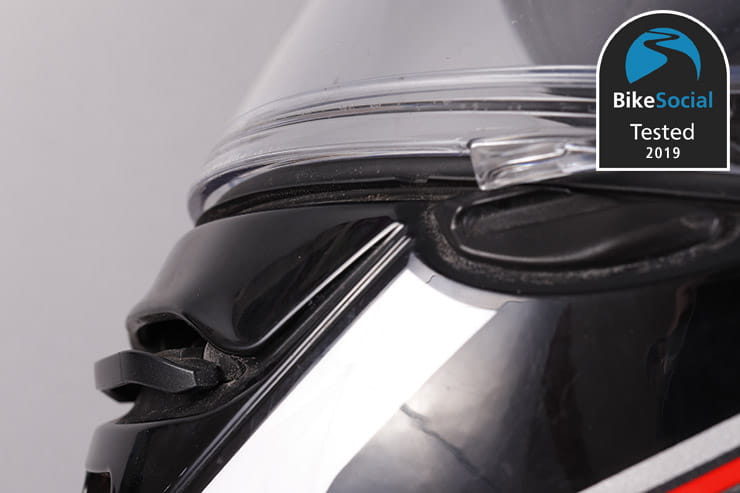 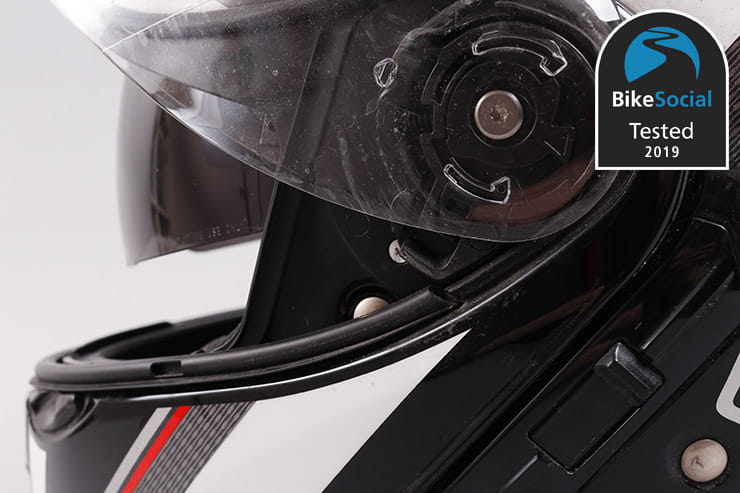 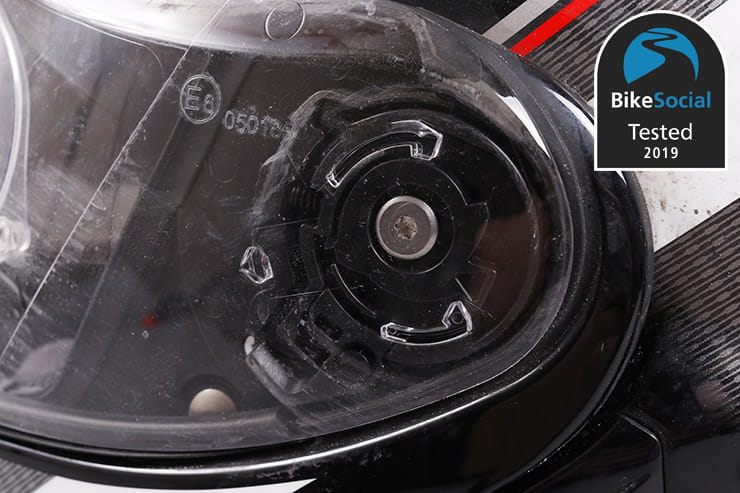 The visor gives a very good, clear view, and combined with the supplied Pinlock Evo anti-fog insert, there’s no problem at all with fogging. When fully closed, no water creeps behind it from the top, though while I’ve read some people say otherwise, I found the previous Neotec also sealed perfectly.

It’s easy to crack the visor just open for more airflow, and it stays there at any speed. Beyond that is about a one-inch step, then five more ratchet steps to fully open.

It’s a shame that there’s still only one thumb tab – on the left – to open the visor; I much prefer having one on either side (or one in the middle), which makes it easier to pop open while holding the clutch in.

The visor fitting is slightly different to the original Neotec, so you can’t use your old visor (though if you’ve had it a good while, it likely needs replacing), but it’s still a reasonably quick and simple process to remove and refit it (once you have the knack).

The drop-down sunshield operates via a slider on the left of the lid, just below the visor – it’s easy to use, and doesn’t touch the bridge of the nose. While in bright sunlight I’d rather use a dark visor, a drop-down sunshield is still a useful addition, especially in changeable lighting. 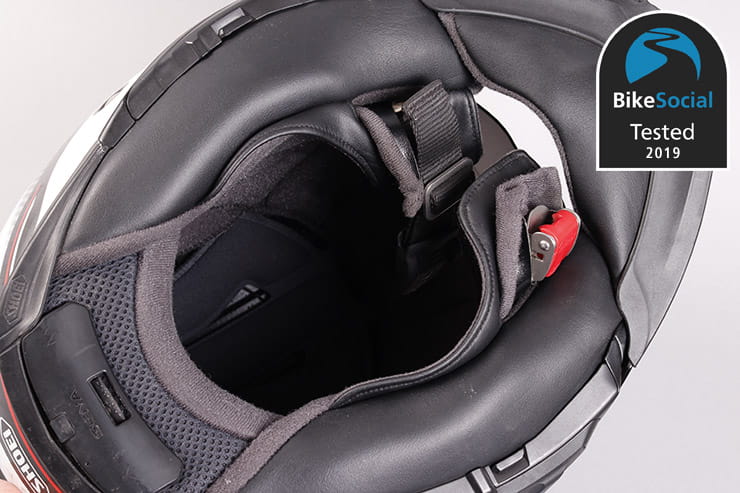 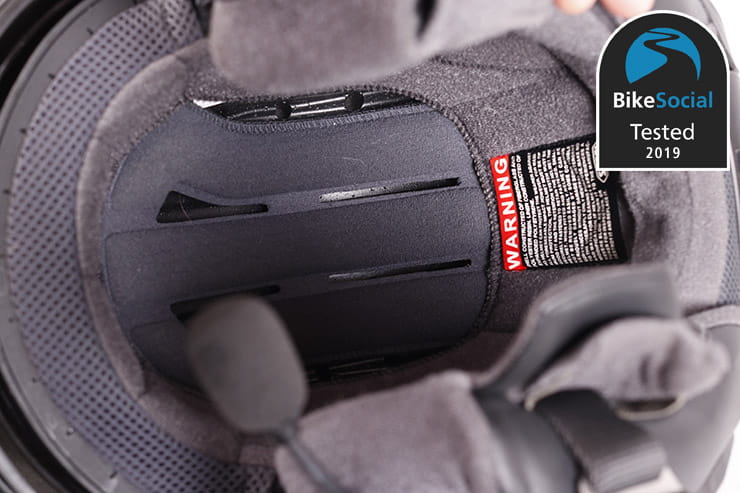 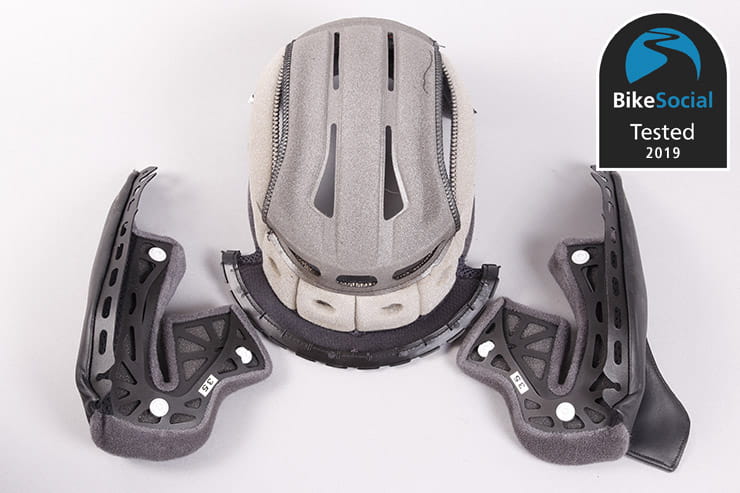 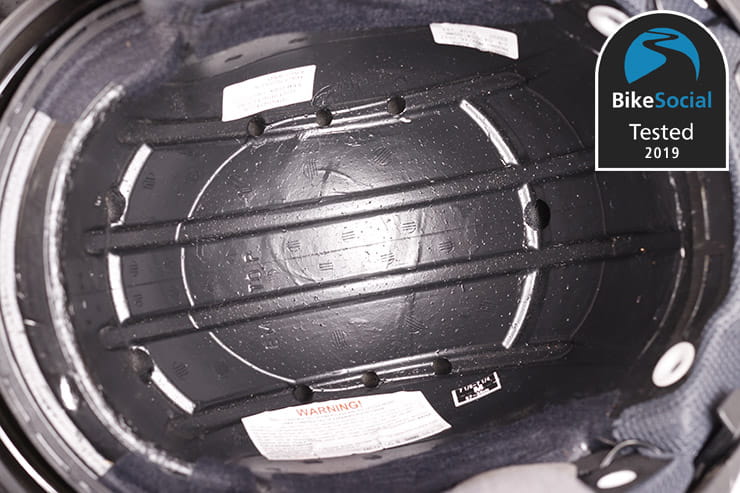 The lining is fully removable and easily washable – it’s very similar inside to the original Neotec, which I machine washed several times over the years I used it.

The polystyrene inner shell has two densities, which are claimed to optimise shock absorption. My helmet did have to go back, as the inner had separated from the outer shell near the front; it wasn’t causing any safety issues, but it was squeeking annoyingly while riding.

A ratchet mechanism fastens the chin strap (which has a removable, washable cover) – this makes complete sense on a helmet like this as it’s easy to use, even with gloves on, and gives a secure fit every time. 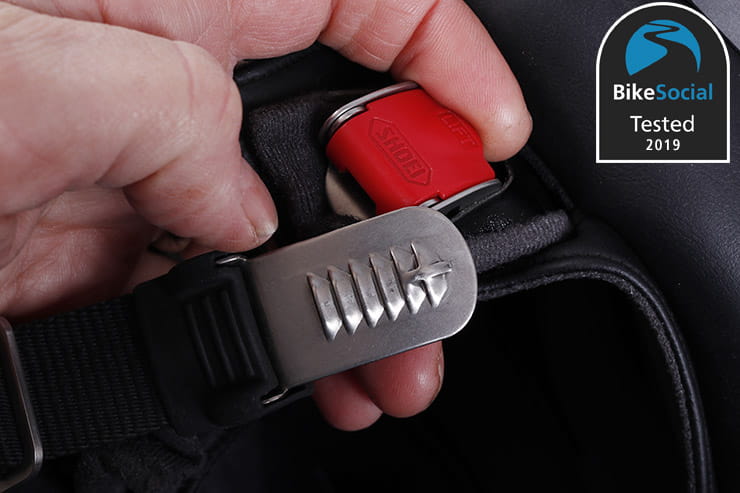 Fit is of course subjective, and you must always try any helmet on before buying – it must fit snugly, but not give any pressure points. Like the Neotec before it, on my head the new Shoei is completely comfortable, even for a very long day’s riding.

Despite any manufacturer’s claims, I’ve yet to find a helmet that doesn’t require the use of earplugs. As it is, the Neotec II is a pretty average helmet for noise – it’s comfortable over long distances, and with earplugs in and the Sena running, I have no problems listening to music.

Comparing it to the previous model, I found it hard to really notice much of a difference. Logic says that the exceptional neck skirt design will make this a quieter lid, but the predominant noise is the natural rumble of wind rushing over the surface of the helmet.

It’s important to remember that any helmet’s noise level and stability will be greatly influenced by the bike you ride (and its screen). On a KTM 1050 Adventure, BMW G310GS, Yamaha MT-10, Yamaha Niken, Honda MSX125 and many other bikes I’ve run for shorter periods, I’ve had no issues with buffeting or excessive noise.

My first impressions of the Neotec II were very favourable, and despite some niggles becoming clear after a year of use, I still very much like it. A lot.

The redesigned skirt and great ventilation in the dry make this an excellent helmet; the only real shortcomings are the front vent allowing water in during heavy rain (not a problem with a tall screen or if you don’t have to worry about fogging spectacles), and the harder-to-operate top vent (which you could put a little grip tape on if it bothers you).

If you have an original Neotec that’s still within its useable life (five years is the recommended time to use a helmet), there’s nothing here that will make you regret owning the old version. In fact, some stockists still have the original model for as low as £399.99 – a bargain for such a great lid.

A flip-front makes filling up with fuel and chatting with your mates so much easier, not to mention being able to pop it open and enjoy the breeze when touring; despite being in the very fortunate position of testing a lot of different helmets, the Neotec II is the one I choose to wear for my every-day commute, and the one I opt for when touring.