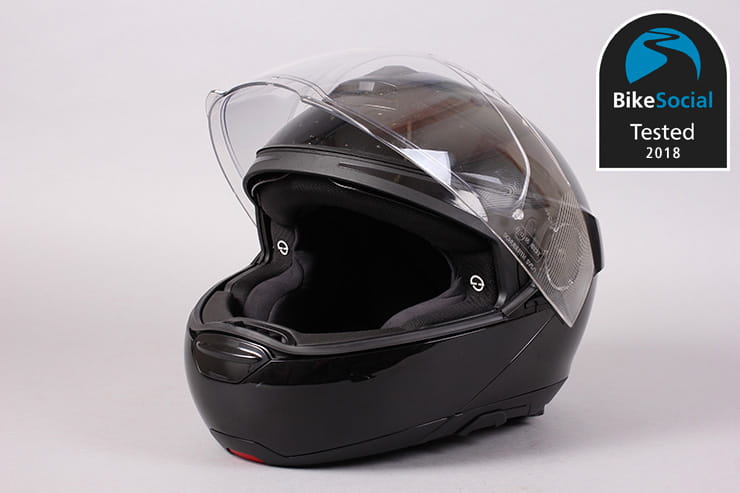 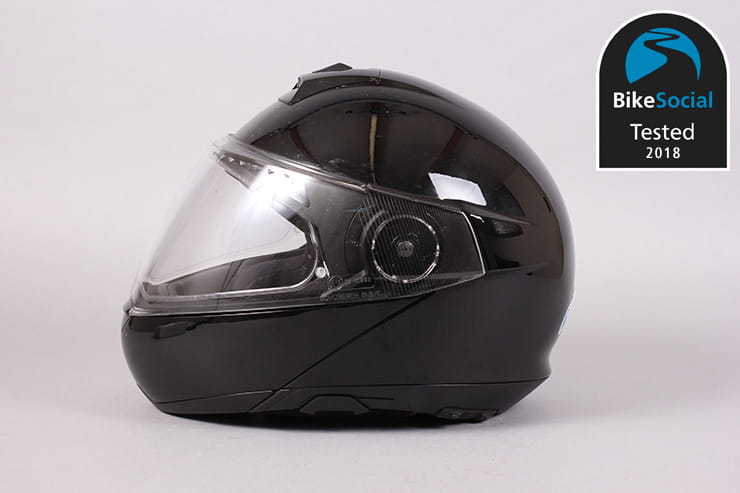 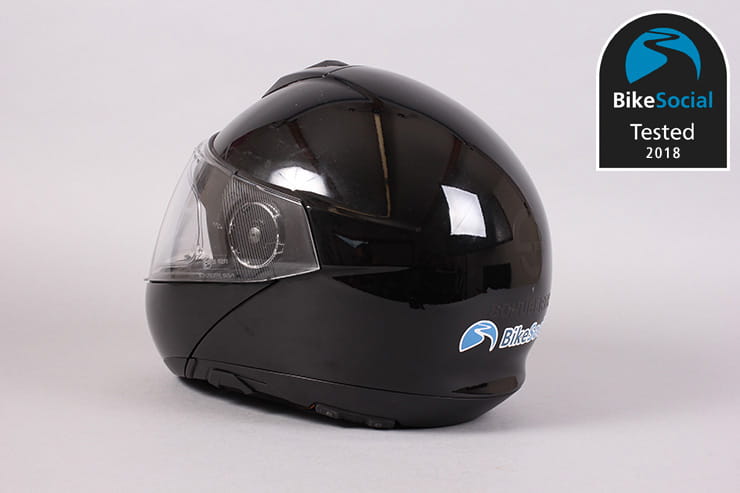 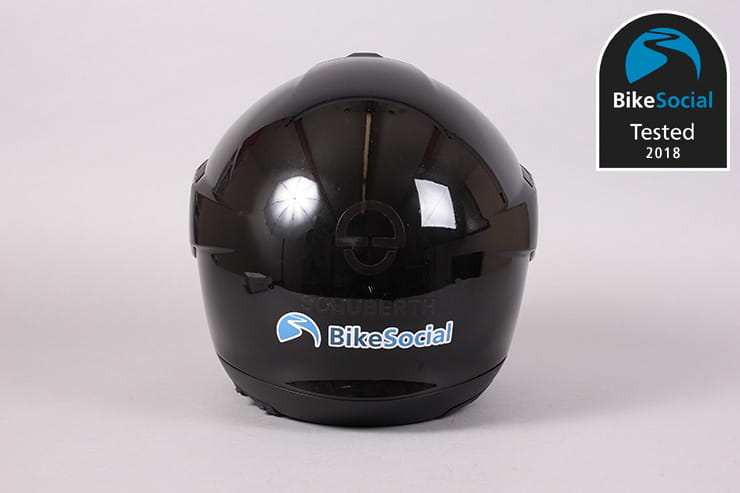 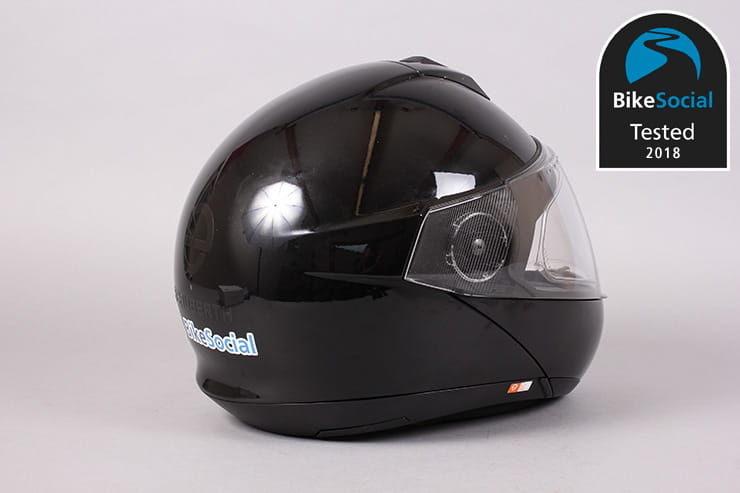 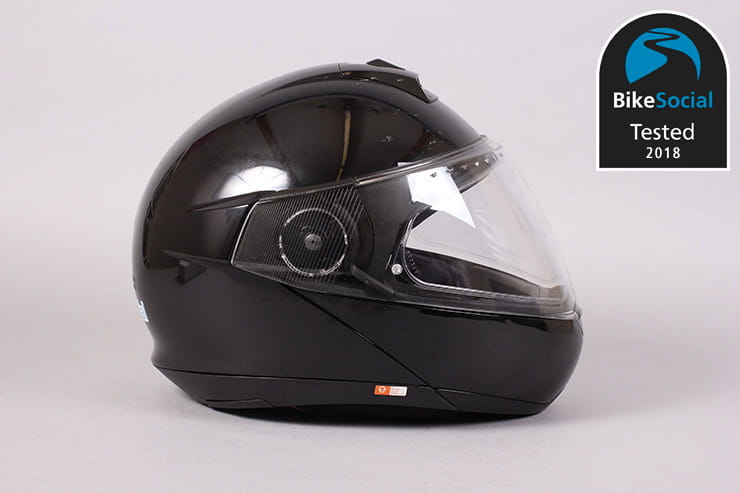 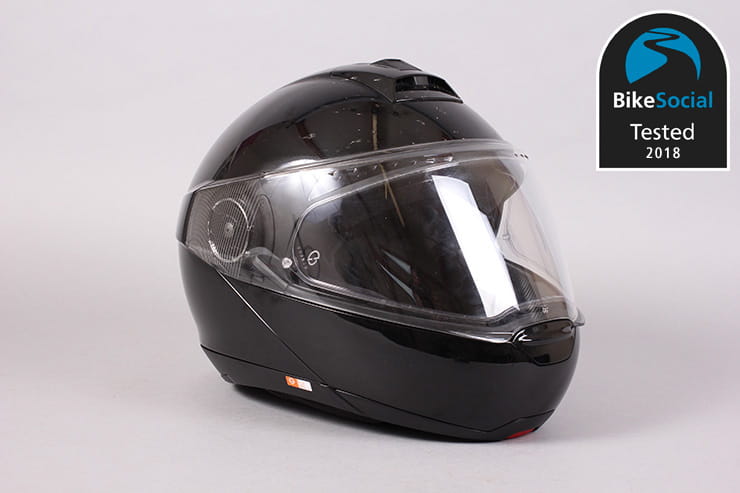 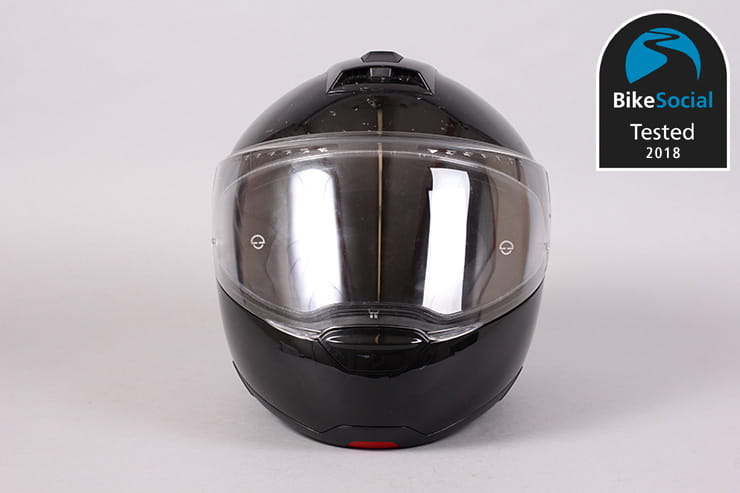 A premium flip-front – or modular – helmet made in Germany, the Schuberth C4 is designed for touring and sports riders. I’ve been using it for seven months on a variety of bikes, including adventure machines, nakeds and sports bikes…

The main shell is a composite fibre, and in this case is finished in a metallic gloss black, which has a good, deep shine. The sleek profile is said to be designed in a wind tunnel, and includes subtle reflective patches on the brow, and in the branding at the rear.

I’ve been wearing a medium, which weighs 1707g, with the SC1 Bluetooth intercom installed. This compares to 1691g for a medium Shoei Neotec (the C4’s main rival), with its own intercom system fitted.

As standard, the C4 already includes the speakers and microphone, as well as an antennae, for its dedicated £299.99 intercom system. You could fit your own intercom, but you’ll need to strip the standard ear pieces out, which would also mean cutting their wires as they run behind the internal structure. 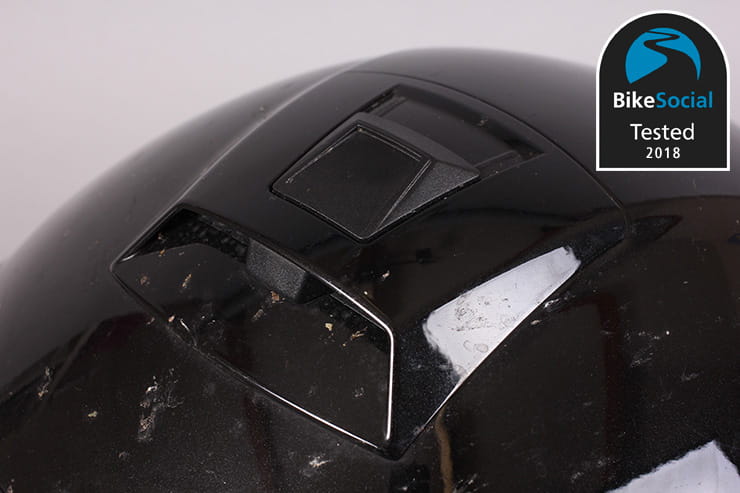 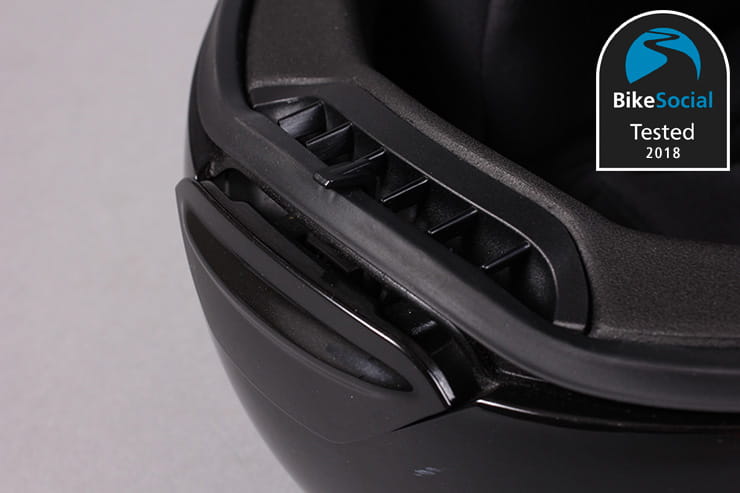 The C4’s two-stage and off top vent is very powerful, while the chin vent, which is open or closed and easy to operate, doesn’t clear my fogged glasses as well as some other lids at very slow speed. With no nose guard the air seems to be driven more up to the brow, which is great for summer riding, and to be fair, at over 30mph the lid has a good movement of air inside, which keeps glasses relatively fog-free without too much of a breeze.

Being a flip-front you can get plenty more air when riding in hot conditions by open it up. Unfortunately the C4 is not dual-homologated, so can only legally be ridden in with it in the closed position. While many people will ride with it open, I’ve found the mechanism to be very free, so the chin-piece has a tendency to drop back down when riding. 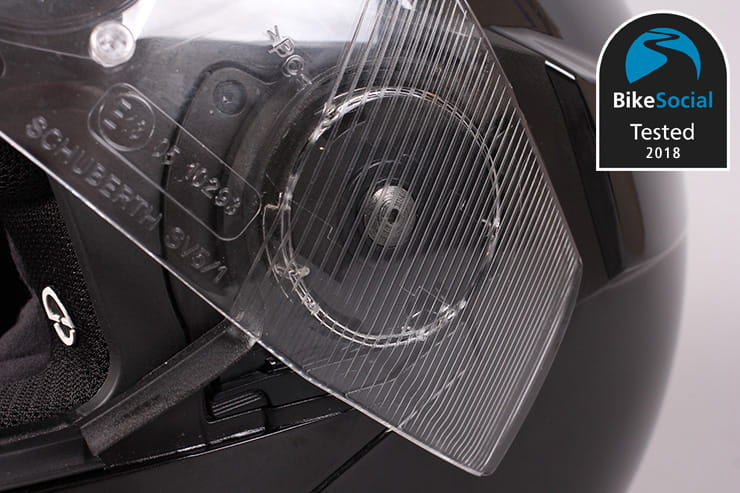 It’s great to see two thumb tabs on the Schuberth’s visor – when holding the clutch in at the lights, it’s a lot easier to thumb the visor open if you need to. It’s also very easy to lock down fully thanks to a new sprung tab at the bottom front edge of the aperture – an improvement over the stiffer C3 design.

There are six stages to the ratchet, and it’s possible to just crack the visor open, but the mechanism does feel rather cheap – a friend likened it to the sound of the helmets you use on your CBT. When I got the lid, the visor was very dry feeling and stiff, so I put a little silicone on the mechanism. Unfortunately this made it too weak – now when riding over about 50mph on my KTM 1050 Adventure, the wind slams the visor shut. I also had the visor pop open once, when doing a lifesaver during a motorway overtake, though I haven’t been able to replicate this since.

Lubricating the mechanism also made the flip too weak – now even nodding lightly at a standstill will see the front section drop from the up position. I don’t recommend using the silicone lube that’s often used on most other lids to keep them smooth and quiet on the C4.

The aperture is very wide, giving good peripheral vision, though the lower edge of the aperture seems quite high, so it’s not as large a view of the world as it might be.

While Schuberth says the lid is designed for touring and sportsbikes, I’d recommend trying one first if you do ride a sports machine, particularly if you have your chin on the tank – as with most helmets with a built-in sun shield, the brow is quite prominent, so can restrict your view if you have your head tipped down.

The visor is very flexible, which has raised some issues on my KTM as it suffers a quite buffety screen – here, when riding with the visor open to get some air (at speeds before it slams shut), it shakes from side to side, which is quite distracting.

The sun shield is easy to operate from the left lower edge of the lid, and cleverly has a small lever that can be swung across to restrict the drop, in case it catches your nose. I found it fine with full travel, though like most helmets, the gap between the bottom of the shield and the aperture can give a distracting bright line along the bottom of your view.

At the time of writing, the anti-fog insert was Schuberth’s own design. Unlike the Pinlock-branded items used in many of today’s lids, this doesn’t have a soft silicone seal, and has proven less effective in very cold weather. It’s worth adjusting the concentric pins at either end to try to get the best seal possible, but I’m told that C4s will come with genuine Pinlock inserts in the future.

The visor seals well when fully latched down, preventing any water from running inside during the rain, and is very easy to remove and replace for cleaning. 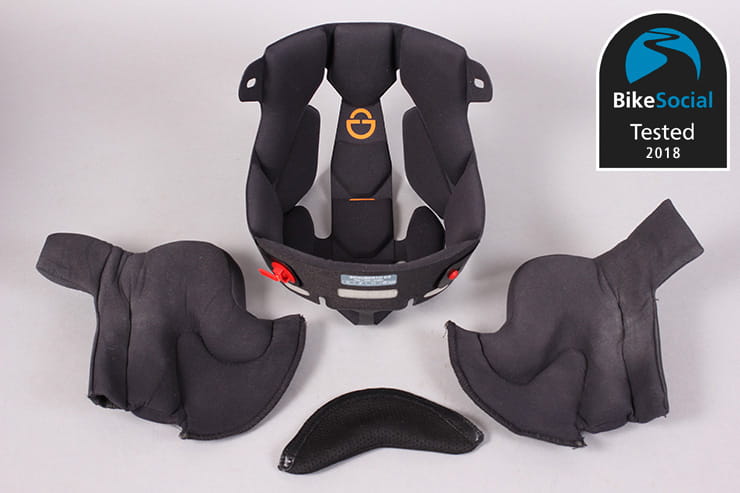 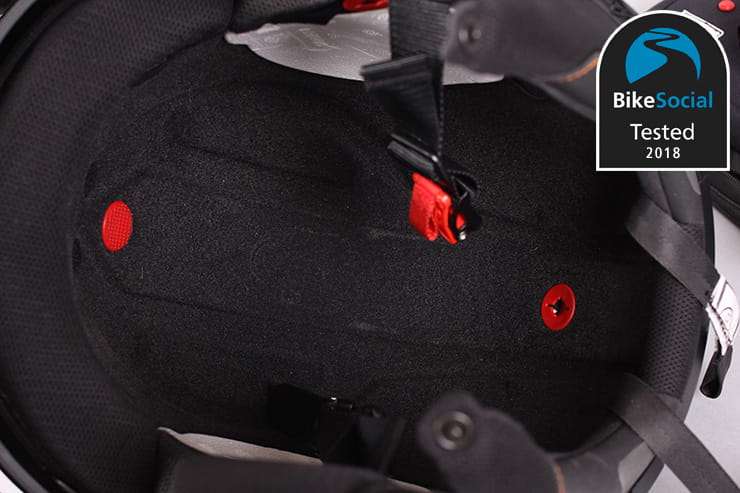 The Schuberth’s fully-removable lining is very soft and comfortable, with a pair of reflective patches on the rear edge.

The optional intercom is barely visible, with controls on the bottom left edge of the helmet, towards the rear, while the speakers are well hidden inside recesses, so don’t press against your ears. Spectacles fit easily into lid. 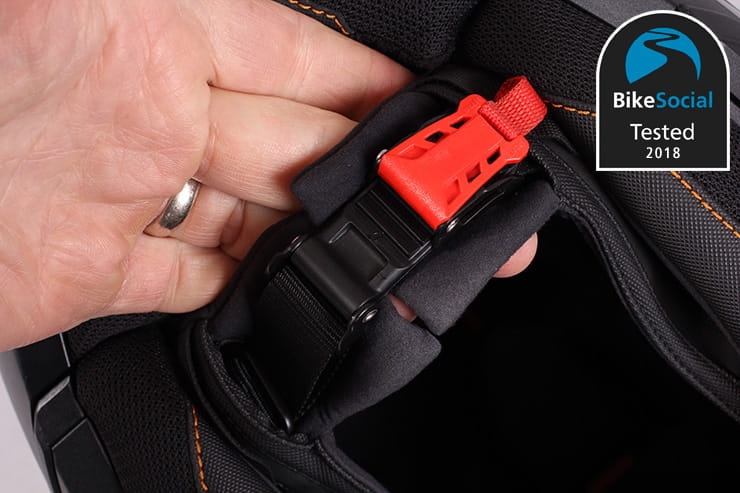 The C4 has a ratchet-type chin strap, which is quick to use and gives a secure fit every time (once you’ve adjusted the buckle to suit your neckline). A fabric tag on the clip makes it easy to pop open, even with gloves on.

You should always try any bike kit on before you buy it, but I found the C4 to be an extremely good fit. The neck line is also quite high, so the helmet doesn’t tend to get in the way of even bulky jacket collars or rucksack straps. 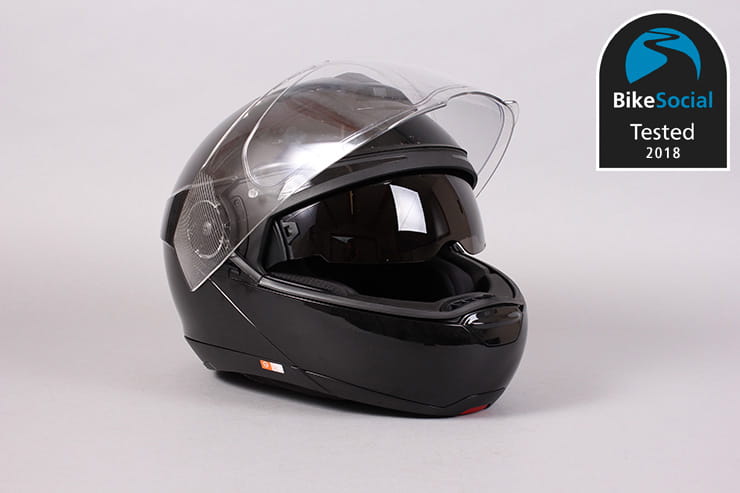 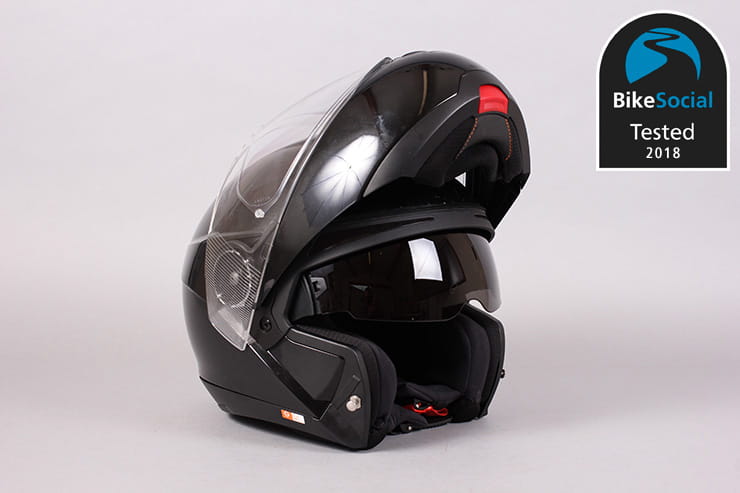 While the wind-tunnel design suggests this could be one of the quieter lids on the market, and the well-enclosed neck skirt certainly helps, the Schuberth C4 is still a helmet that needs earplugs – I’ve noticed no real advantage from the ribbed visor edges or sculpted mechanism housing. As flip-front helmets go though, the C4 is far from the noisiest design.

There are many fans of the Schuberth range of lids, and as the German company also rebrands its products for the likes of Held and BMW, there are a huge number of them on the road. The main competitor to the C4 is the Shoei Neotec, which has been replaced by the Neotec II. It’s too early to judge the new Shoei, but having used the original Neotec for several years, I have to say that I prefer it to the Schuberth. However, I’d recommend that you look at both before investing, as we all have different shaped heads.

I never thought I’d wear a flip-front, but being able to talk to people with it on, or even easily open my garage door without having to take it off has changed my mind.

It’s a bit noisier than I expected, and does whistle a little, but I’ve used it on various bikes, and ridden huge trips in it, and keep going back to it.

The visor’s very easy to remove, and while I don’t usually like the styling of drop-down sun visors, when I rode to Faak Am See I took a separate dark visor, but found it a pain swapping between the two, so did use the shield. Only when I knew nobody would see me though!

I love the SC1 intercom system, and use it a lot for the sat-nav and music. Having the phone is really handy too, though the buttons are in a slightly awkward spot – a remote would definitely help.

I’d say the ventilation is average – it doesn’t do anything special. I’ve used it in some pretty extreme conditions – at one point the entire visor got snowed over, and I couldn’t even open the flip after that froze.