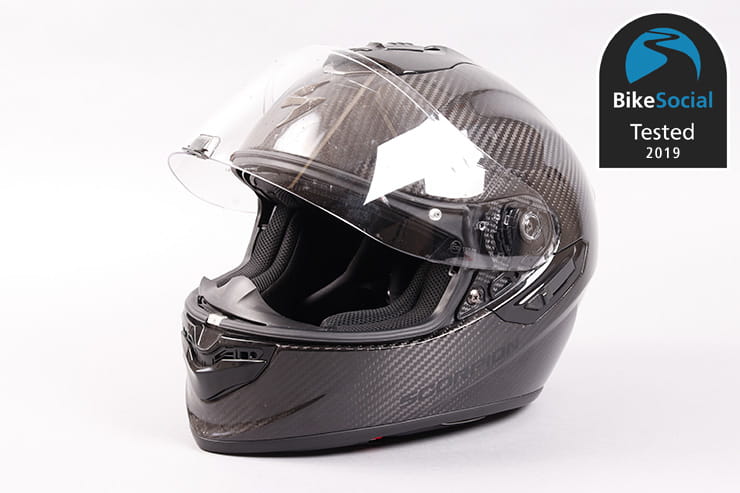 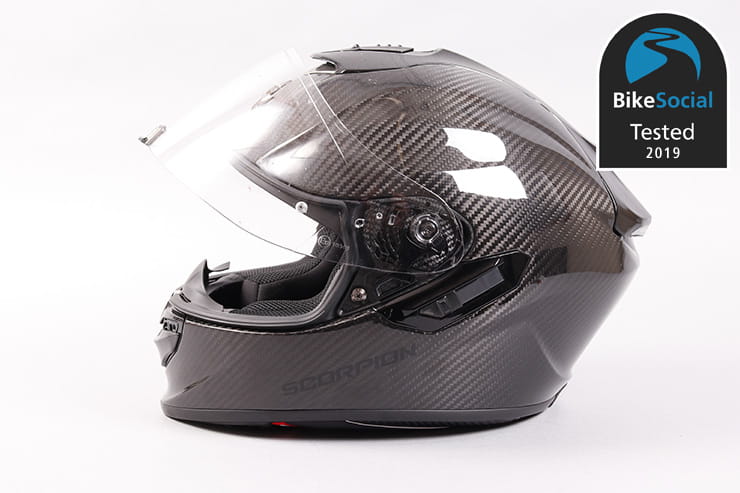 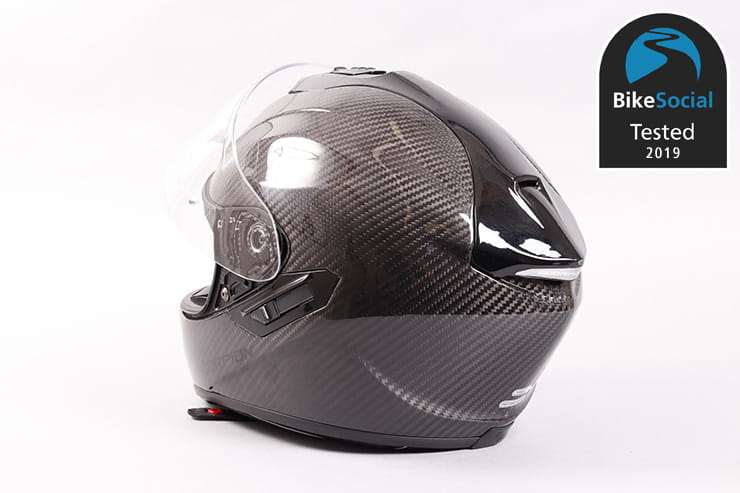 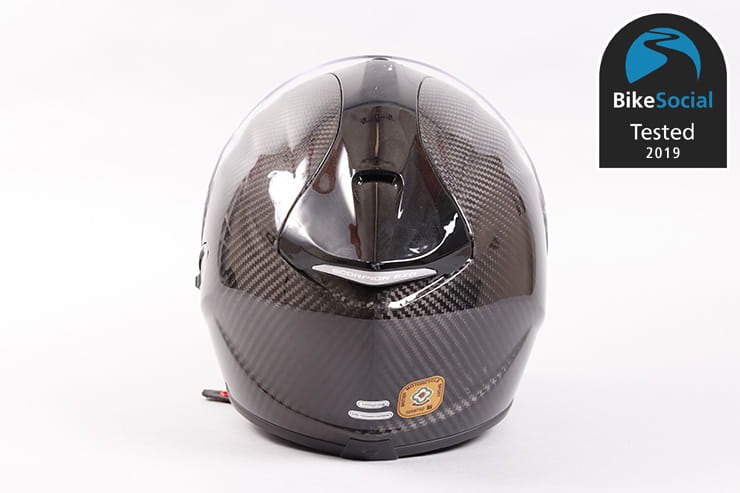 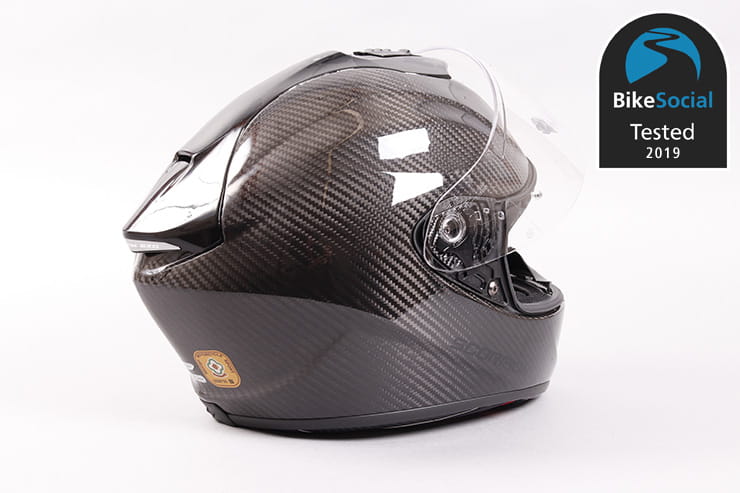 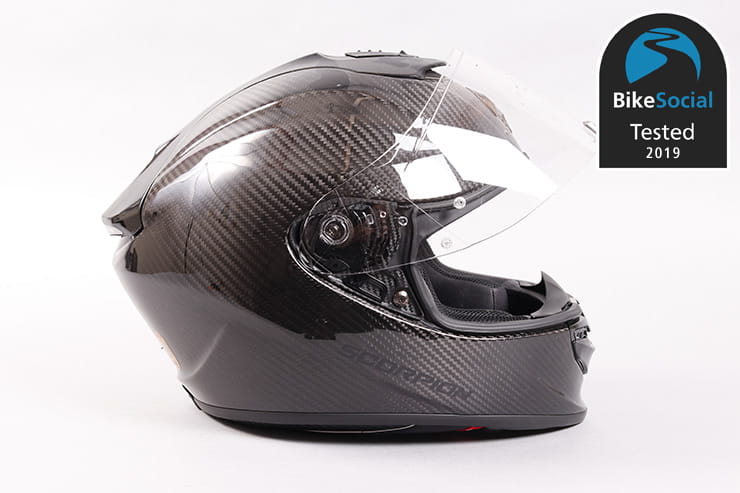 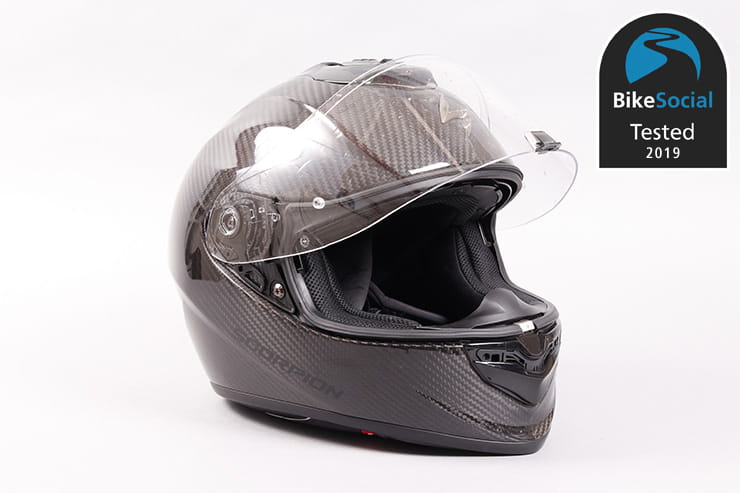 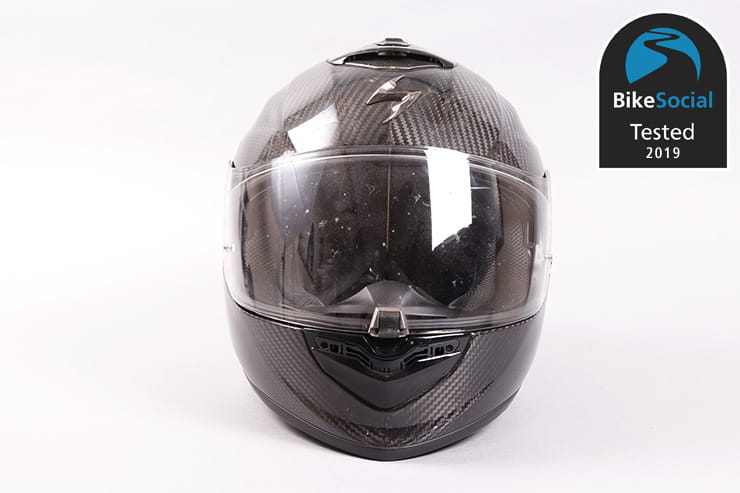 Having had the Scorpion EXO-1400 Carbon motorcycle helmet on review for the past eight months, I’ve had the chance to use it in all weathers on a huge variety of bikes, from the Honda MSX125 to the Suzuki GSX-S750, Yamaha Niken, Yamaha MT-10 and Kawasaki Versys 1000…

The carbon-fibre shell is immediately striking with its deep gloss finish and aggressive styling, drawing to a point at the rear; graphics applied over the carbon fibre are also available for £349.99. Plain colours on a composite fibre shell start at £249.99, though the non-carbon-fibre versions are a couple of hundred grams or so heavier.

Three shell sizes are used across XS, S, M, L, XL and XXL, so the lid shouldn’t ever look too large – cheaper helmets using one or two shell sizes have to be big enough to accommodate the largest size, so can look clumsy on a smaller head.

While the shiny black plastic vents and exposed screws inside the chin vent don’t carry through the premium look of the carbon-fibre, the overall finish is very good, complemented by the carbon-look fabric around the neck.

The helmet construction is very flexible – if you’re used to the hard outer shells of some of the competition (especially Arai), the ease with which the Scorpion can be distorted might be disconcerting. However, it’s tested to ECE 22.05 and the Scorpion EXO-1400 Carbon also has an ACU Gold sticker, so you’ll be allowed to use it on track. 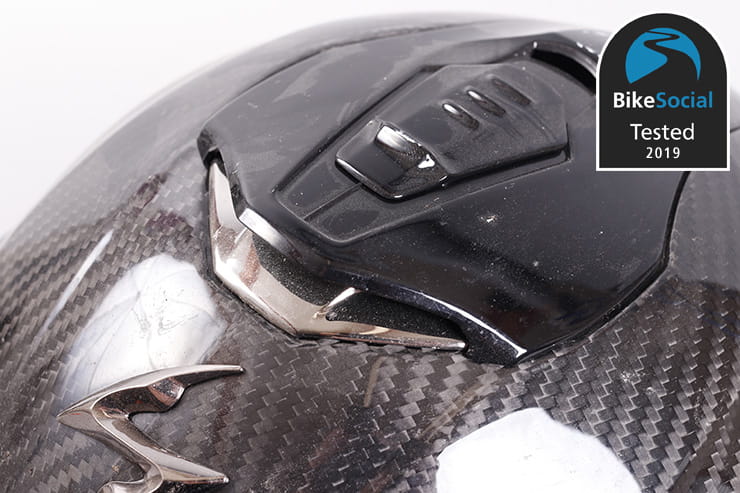 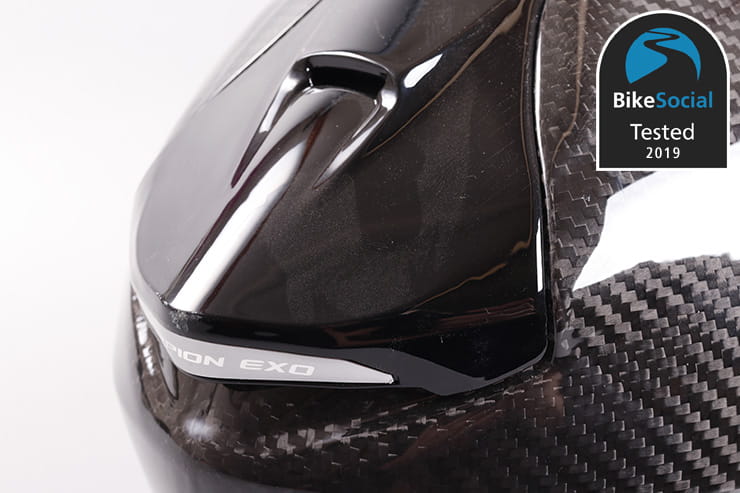 The effectiveness of any helmet’s ventilation is going to be influenced by the type of bike you ride – a large fairing will reduce the amount of air that can flow over your head.

The Scorpion’s chin and top vents each have a single slider offering two positions and closed – the top feeds two holes inside about an inch apart, with deep grooves in the polystyrene to aid air flow.

There’s not a huge blast of air from the top, but there’s a clear distinction between fully open, half open and closed. The chin vent gives a good movement of air around the face if your bike doesn’t have a tall screen, while the removable chin skirt keeps the interior fairly still when everything’s closed, or helps create a more airy interior when needed.

Pressing the visor’s catch to unlock it pops it open about a centimetre at the bottom, allowing much more air to get through, making it a good choice in hot weather. 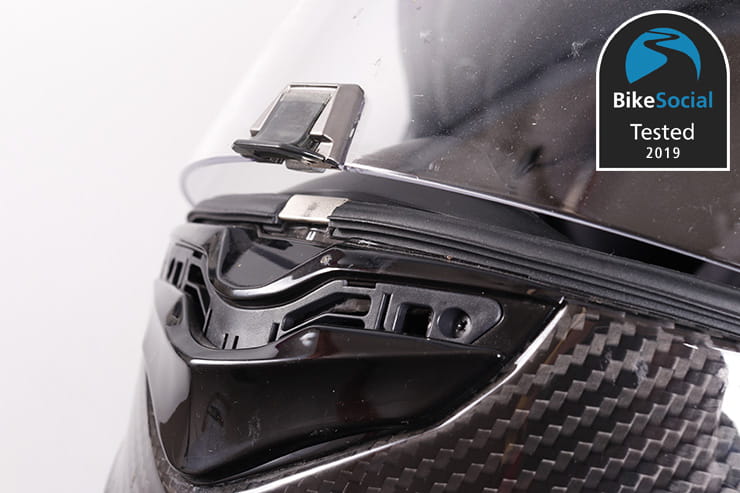 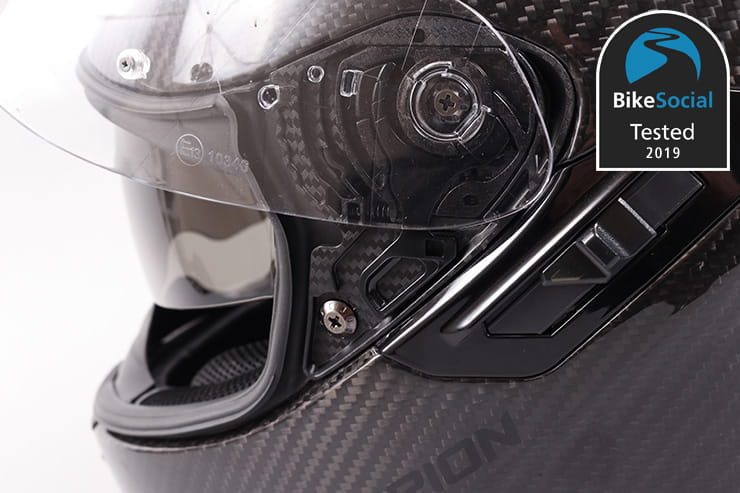 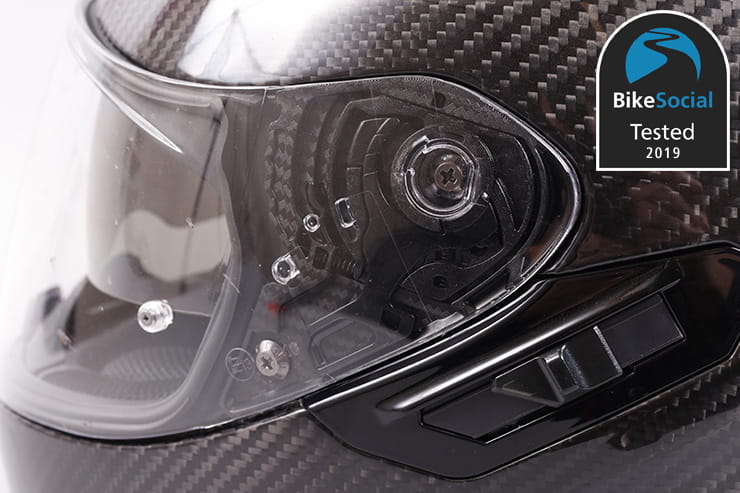 The visor’s central catch is very easy to operate with gloved hands and, being central, you can use your left or right; something I really appreciate when sat at traffic lights while holding the clutch in.

But while the cracked visor aids ventilation significantly, the fact that it’s made of relatively flexible plastic means it shakes on some bikes – seeing the catch jiggling is distracting, and when there are a few bugs in front of your eyes, the movement gets all the more annoying.

Besides shut and cracked open, the visor’s slightly harsh ratchet has five positions. Removing it is fairly easy using the sprung catches on either side, then popping it back in just requires lining it up correctly and giving it a press. It seals well along the top, not allowing water to run down even in heavy rain.

The drop-down sun-shield is operated by a slider on the left, behind the visor mechanism – it’s simple to use and the shield stops just above my nose.

A Pinlock Max Vision 70 is supplied – the mid-level performance of this ant-fog visor insert.  The Pinlock pins are offset, so can be rotated to get the best fit, though you’ll need a small Phillips screwdriver.

Brilliantly, a dark visor comes with the EXO-1400, which is worth £29.99. I much prefer a dark visor to a drop-down sun shield as it reduces the amount of plastic in front of the eyes, so improves clarity. While dark visors should technically only be used on track, on bright days I will wear one on the road, but only while carrying the clear with me, in case the weather changes. Anecdotally, most police officers have no problem with the sensible use of dark visors. After all, drop-down sun-shields are often darker than is technically legal. Be sensible and you’re unlikely to have an issue. And with the Scorpion, there’s little excuse to not carry a spare as a protective drawstring visor sleeve is also supplied.

Despite its aggressive styling, the Scorpion EXO-1400 Carbon isn’t a race lid. Any helmet with a drop-down sun-shield will have a thicker brow that makes it more likely to get in the way of the top of your vision while tucked in on a sportsbike, but the visor aperture on this helmet is also set very much in a touring position for a more upright rider. Of course, the advantage of this is that it’s a lot easier to tip your head and block the sun when riding towards it. 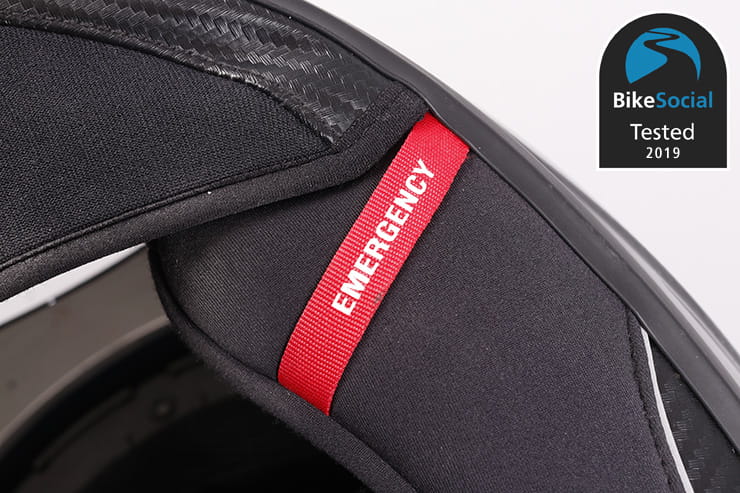 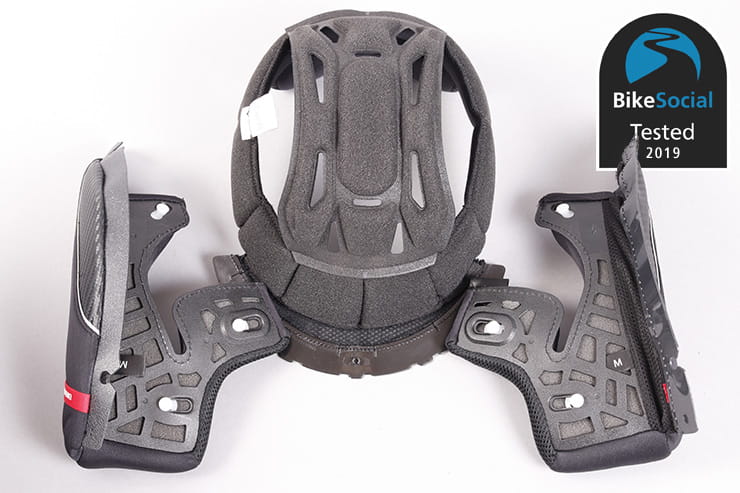 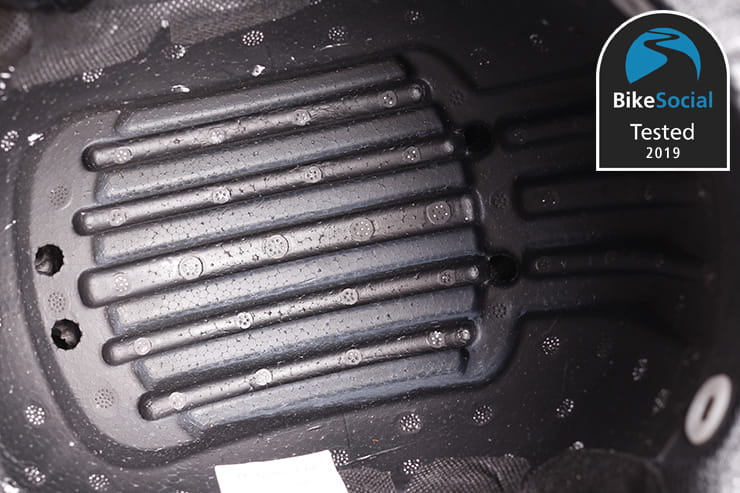 The wicking liner feels quite cool and is fully-removable, making it easy to keep clean. The cheek pads also have clearly-marked emergency pull tabs, which allow emergency responders to remove them, letting them lift the helmet clear without putting as much strain on the neck.

Hidden under a pair of pop-out sections of lining are two deep recesses for intercom speakers – great to find on any lid, and these apertures are more accommodating than many. 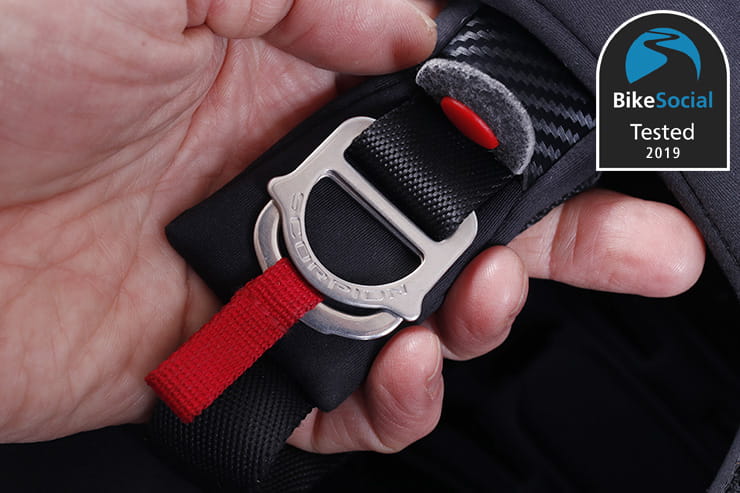 The Scorpion EXO-1400 Carbon uses a double-D fastener; this is a very secure method preferred by many, though you can’t use it with gloves on. A popper keeps the spare strap out of the way.

You should never buy any helmet without first trying it on; fit is incredibly subjective, and each manufacturer has their own idiosyncrasies. I find HJC, Shoei and Arai instantly comfortable for instance, as well as about half the Shark range. But this Scorpion had a serious pressure point across my brow. While I wouldn’t recommend doing it yourself, I compressed the polystyrene liner a little with the back of a spoon, which sped-up the breaking in period, making it much more comfortable. However, even now after an hour’s riding I get discomfort at the brow and the back of my head.

I also find that the mesh of the liner at the top of the visor aperture wraps around a touch too far, just pressing onto my head where it should be the softer, wicking liner; this too makes for a slight hotspot on my head.

The interior is shaped to fit glasses, and I’ve got on well with mine, though some frames seem better than others – try yours to make sure they’re comfortable.

The EXO-1400 has a clever pump system that uses a large red button in the chin section to rapidly inflate a bladder on either side; the idea is that the helmet should be easier to get on, but once inflated the area just above the opening can seal more tightly against your jaw.

In practice, the effectiveness of this will depend very much on the shape of your face; I found the Scorpion grips naturally well around the bottom of my head, and inflating the sides just added a little unwanted pressure. Noise might be reduced a little for some riders, but I didn’t notice a difference.

Deflating the bladders is a simple matter of pressing a small but easily located button next to the pump. 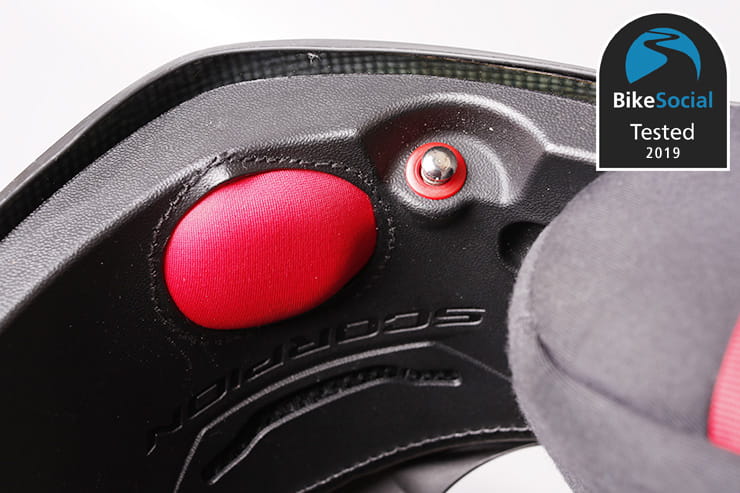 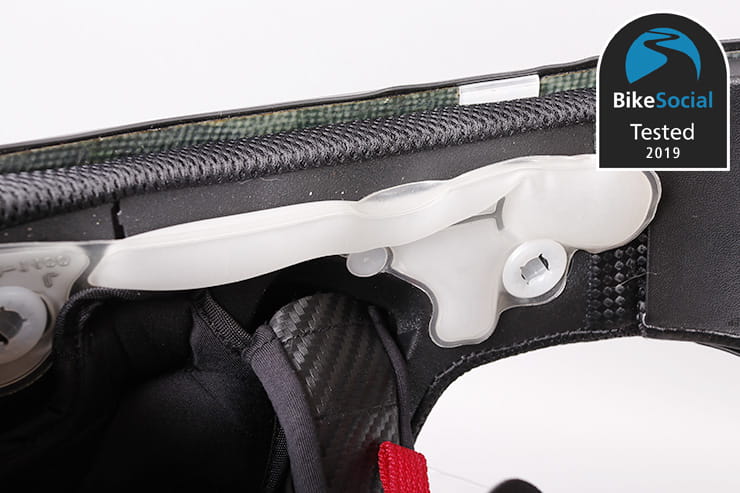 The noise levels in any helmet will be heavily influenced by the type of bike you’re on – screens often cause buffeting, as can the design of the fairing. I’ve never worn any helmet that can be worn without earplugs, and while the Scorpion isn’t exceptionally loud, I do find it a little noisier than some other helmets

Beside the fit, which is very personal, my only real grumble with the Scorpion EXO-1400 Carbon is the shaking visor. This will vary bike to bike, but on touring machines with a screen that causes buffeting it’s more likely to raise its head.

But it is very good looking, and considering the features and supplied dark visor, it’s extremely competitively priced. Try one on, but like any helmet, make sure you feel for any pressure points that could get more painful after a while in the saddle…