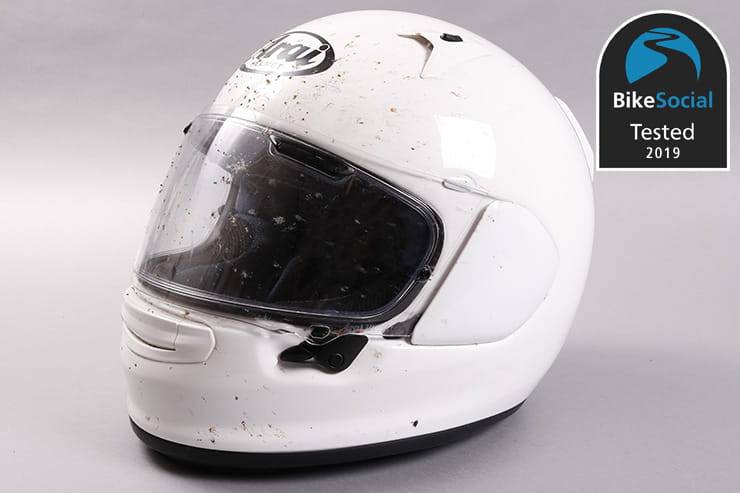 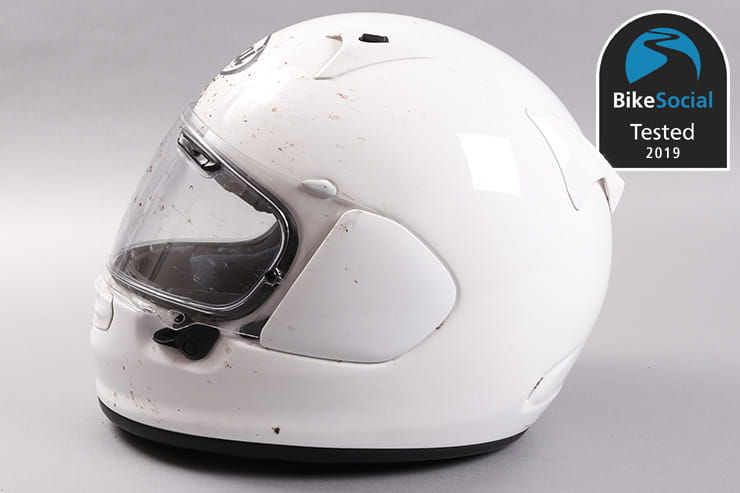 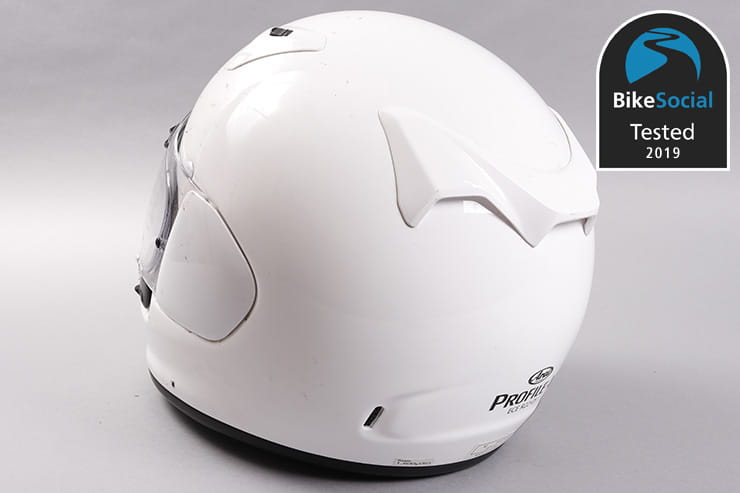 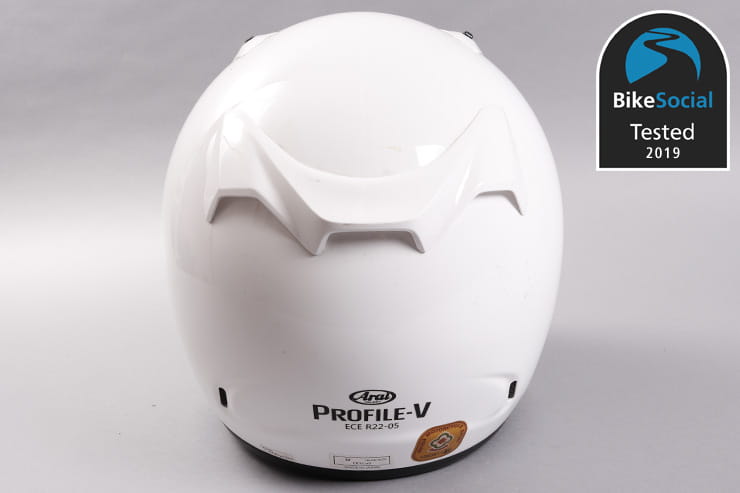 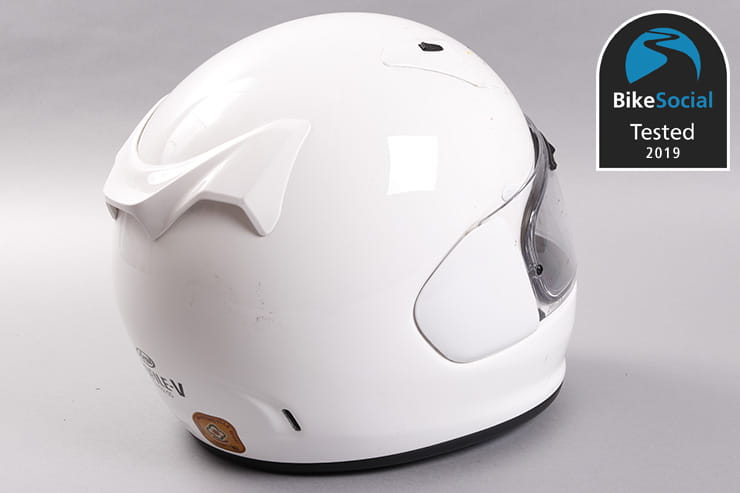 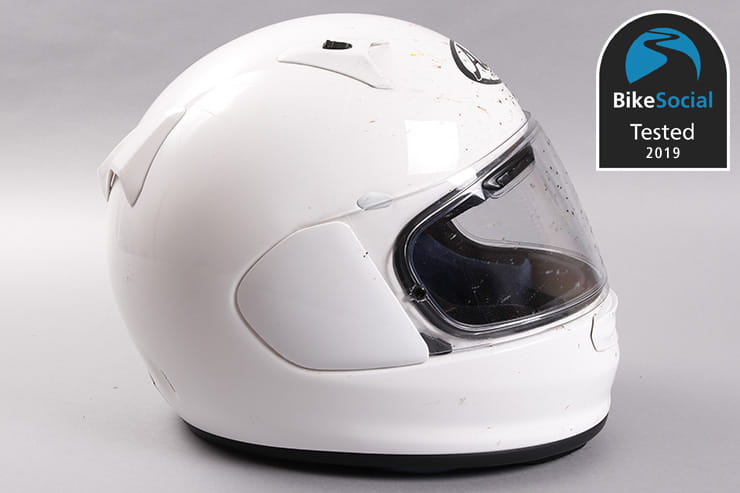 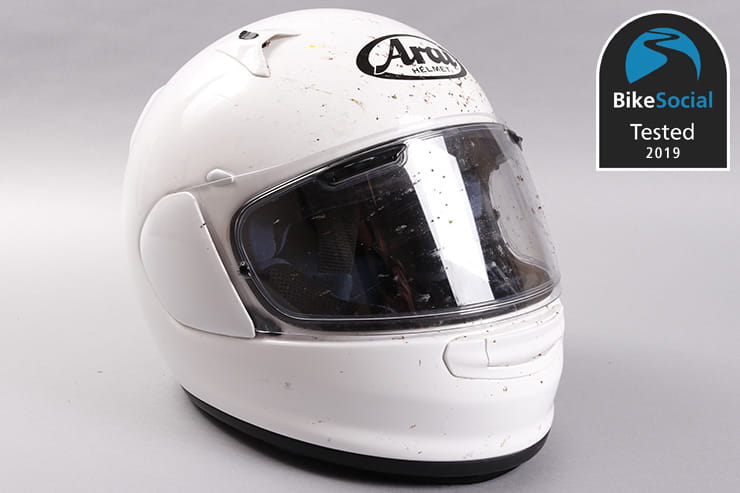 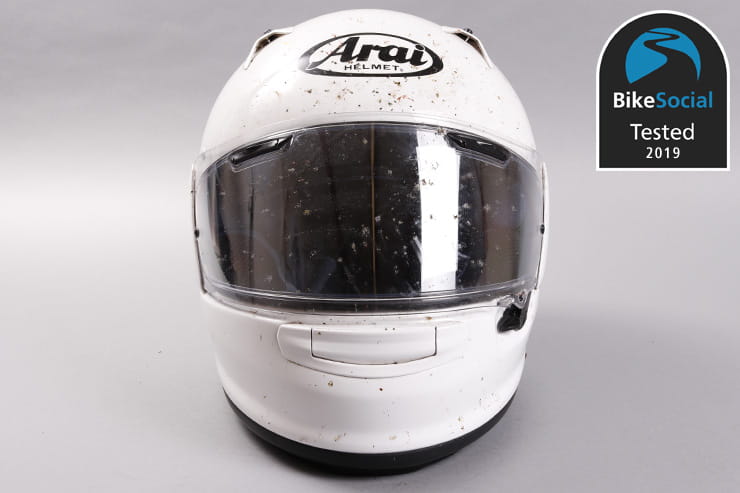 In a market that sees helmets equipped with drop-down sunshields and fully-removable linings for £150 and less, some might question why anyone would want the hand-made Arai Profile-V, which costs £379.99 for plain colours and £459.99 for graphics. All legally-sold helmets in the UK are approved to ECE 22.05, so a helmet’s a helmet, right?

The Arai Profile-V uses a multi-layer fibre and resin mix that makes for a very strong outer shell. In demonstrations you’re invited to stand on one; Arai’s belief has always been that the outer should be as tough as possible to spread any forces in a crash and reduce the chance of penetration. The inner liner – which is a clever one-piece, multi-density expanded polystyrene – can be softer, in order to transfer the minimal amount of force to the head in an impact.

The strong outer shell is also claimed to give much better protection over repeated impacts all across the helmet, while the smooth design is intended to help it glance off in an impact. In the same way that MIPS is starting to appear on some lids to reduce the potential shear forces applied to the brain in a crash, Arai’s outer shells are all intended to minimise rotational force – that’s why, besides relatively small detail changes, Arais have looked pretty much the same at first glance for so long.

This ACU Gold-approved plain white Profile-V is well finished with quality paint and trim. The Arai logo isn’t lacquered in, but it’s well applied and shows no signs of lifting after several cleans. I’ve chipped the paint on the top of the helmet by walking into our garage door; this isn’t surprising, and while Arais have had a tendency to chip a little easily due to stones, that hasn’t happened to date on the Profile-V.

With the visor, this medium-sized Profile-V weighs 1586g. It’s a good 200g heavier than many of its competitors, but it never feels it in use. I’ve ridden many very full days with the Arai and have never had any issue with its weight. 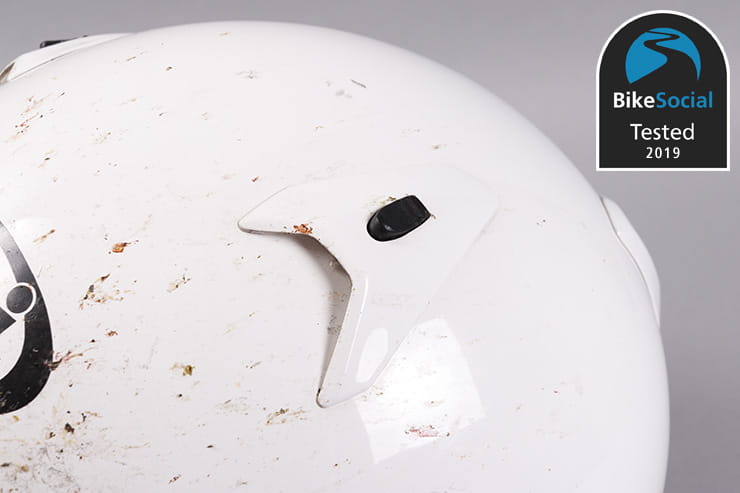 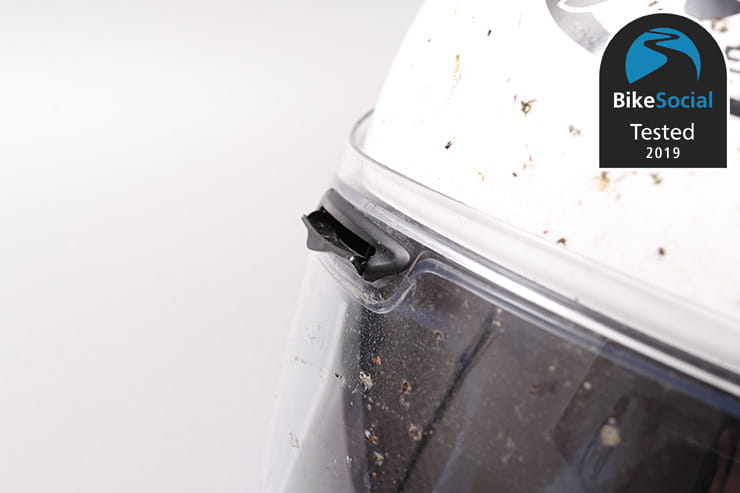 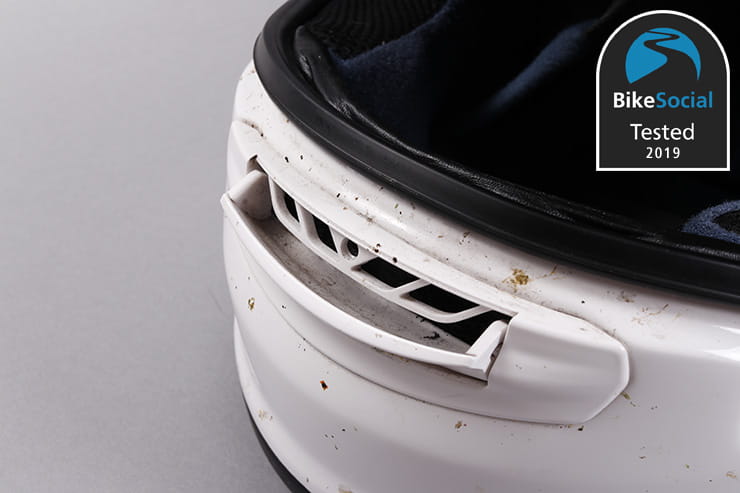 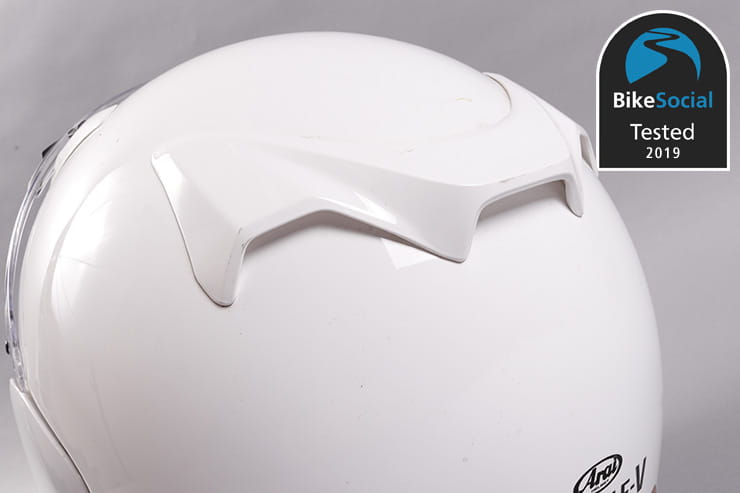 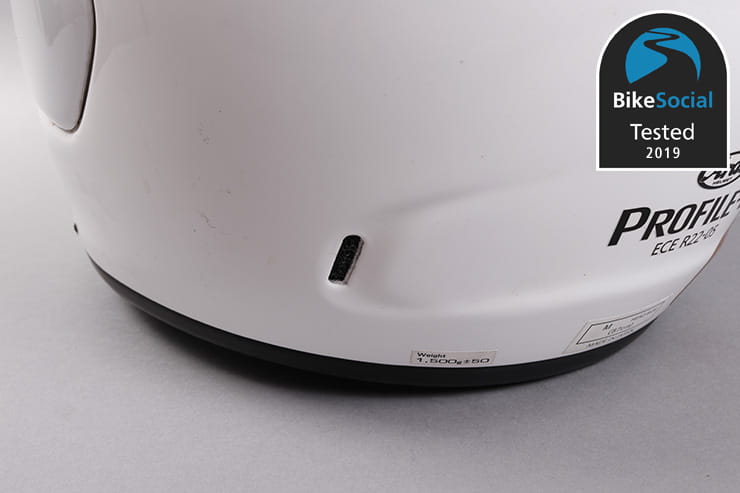 The Profile-V has a pretty easy to operate two-position and closed chin vent that directs air up across the visor and into the mouth. It doesn’t blast the mouth, but the air blowing up the visor helps to keep spectacles clearer (thought it’s not drafty). How much air you feel will of course depend on the bike you’re riding and its screen.

On the visor are a pair of two-position and closed brow vents; these are a little more fiddly with bulkier gloves on, but channel air to your forehead.

On the top are two separate on/off vents. The levers are small and hard to feel through winter gloves, but once you get used to them they’re fine. There are three always-open exhaust ports under the rear spoiler, with two more at the bottom of the rear.

I’ve never felt overly hot in the Arai, so the vents all help to keep your head cooler, but with no channelling in the liner, air movement isn’t as noticeable as in some others. 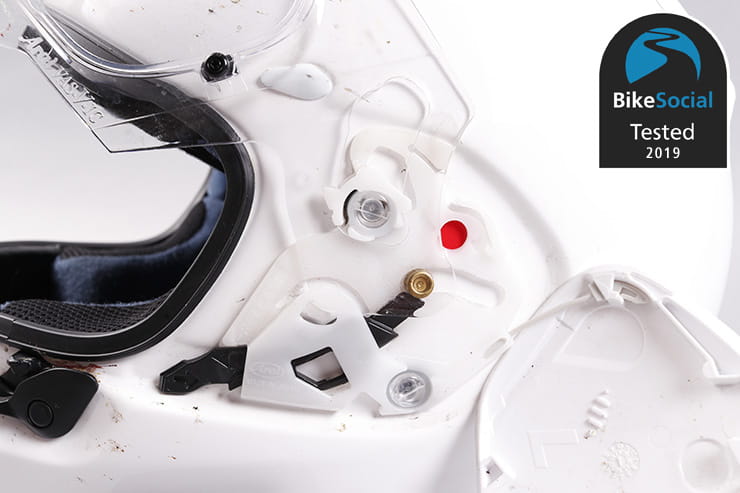 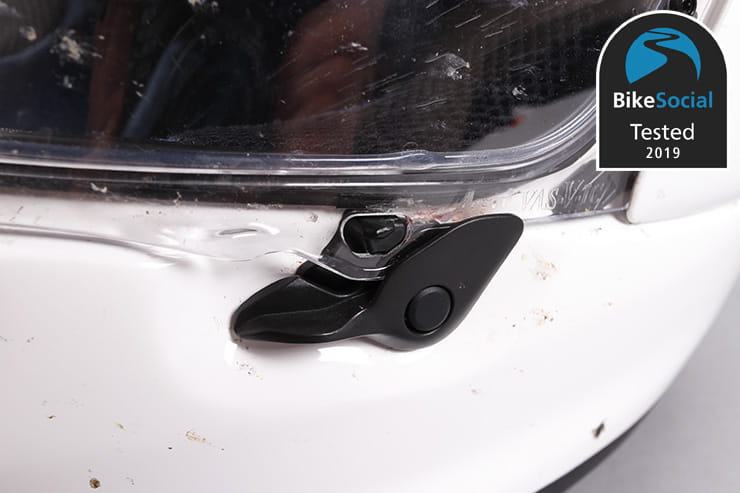 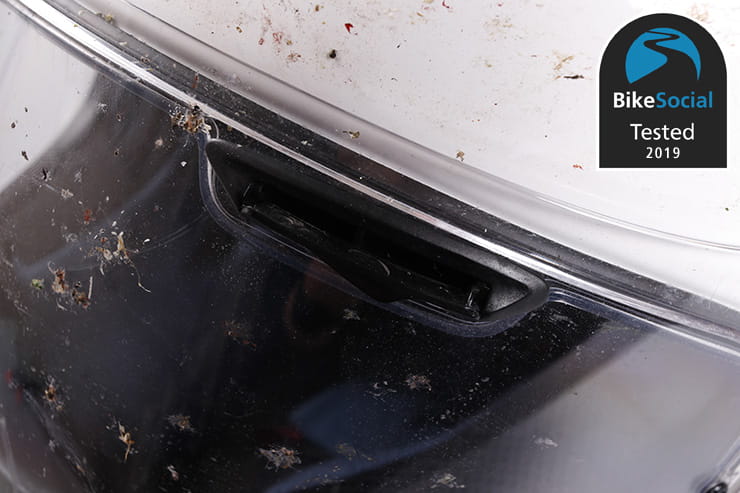 Arai’s visor mechanism is infinitely adjustable – with no ratchet, you can put it just where you want while you ride. It also stays in place well, unless you’re going particularly quickly with it not closed down. You can also lock it completely, but I rarely feel the need, unless it’s raining.

Latched down, no water can get past the excellent top seal, and even when cracked open only a small amount can dribble past.

The visor is opened with a lever on the left – roll this up with your thumb and it unlocks the visor leaving it just cracked for extra ventilation. Continue pushing upwards and you’ll raise the shield to wherever you want. I really like being able to set it anywhere, and do prefer this to a ratchet, which can often feel harsh. But by its design you can only open the visor from the left, which means when you’re sat in traffic holding the clutch in you have to fumble around with your right hand, which can be quite awkward. If you don’t hit the lever correctly, it can feel pretty stiff.

How to change an Arai visor

A Pinlock MaxVision insert is supplied, so unless you’re riding with all the vents shut and are generating a lot of moisture inside your helmet, you shouldn’t get any misting. As I wear glasses I have to keep the air moving around inside any lid; the Arai is as effective at staying fog-free as any other good-quality helmet I’ve used.

There’s no drop-down sunshield. Personally, while they are handy for if you’re caught out, I much prefer wearing a dark visor, carrying a clear one with me in case it gets dark. Of course, that ads another £60, but I like having just one piece of plastic in front of my face, rather than the three that a sunshield, Pinlock and clear visor make; I don’t use a Pinlock with a dark visor as they’re used in the warmer weather, so the clarity is much improved compared to a drop-down shield.

I also find the light line that appears under a drop-down shield distracting. Arai does offer its ProShield – a flip-up dark visor that attaches to the outside, but this is £100, and I’m not a fan of its style.

I’ve no problem with the visor when it comes to removing it for cleaning – press the lever on either side to flick the side covers off (they’re retained on straps so won’t get lost), then rotate the visor and unhook it. If you can read instructions, it’s a simple process.

Previous versions of the Arai visor took a little more brute force, and after several years the side covers could crack; this updated system is a lot easier. 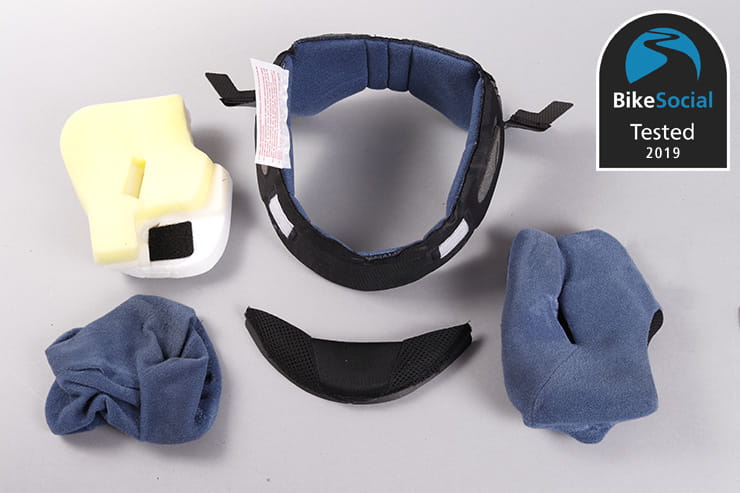 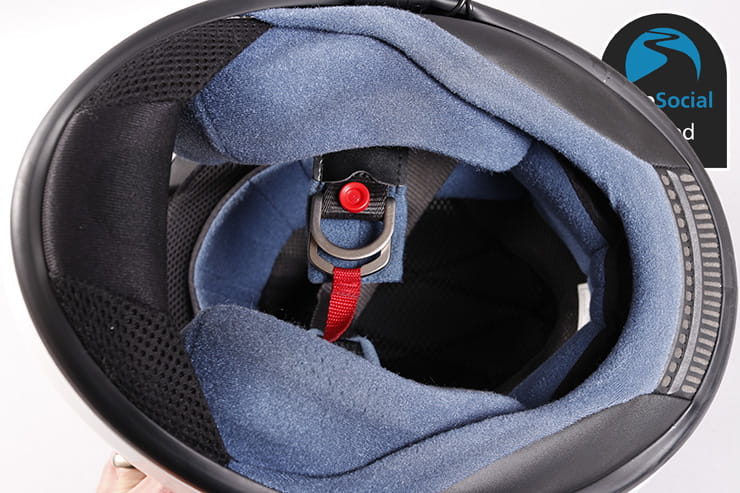 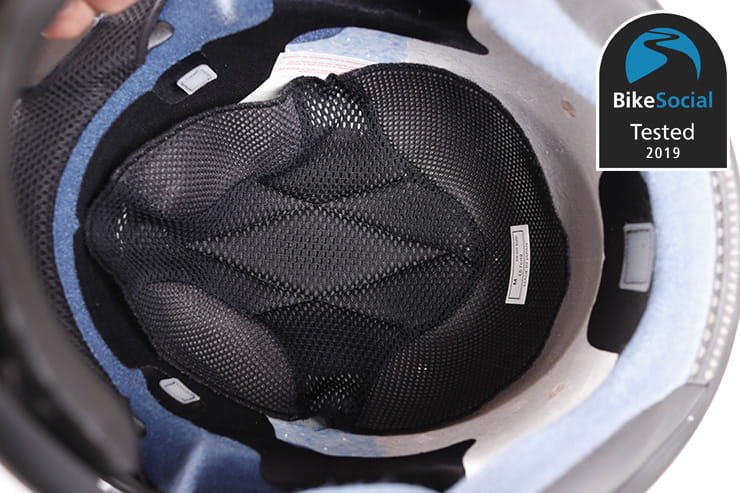 The chin skirt is not designed to be removed…

The lining is comfortable in all temperatures and soft against the skin. The right cheek pad has bobbled up where it’s been snagging on the Velcro of the Dainese Carve Master 2 jacket, but it doesn’t interfere with wearing it; it just looks untidy. It’s for this reason that you shouldn’t put your gloves in your helmet – besides transferring dirt to the liner, the Velcro on them will pull at the fabric in your lid.

Only the cheek pads and the area around the circumference of the head is removable – the skull cap is glued in place. That means the majority of the helmet it easy to wash, but for a full clean you’ll still need to get the whole lid under the shower.

The neck and chin skirts are also both glued into place, though I’d pulled the chin skirt out before I read the instructions. Fortunately it’s staying in place now I’ve poked it back, but please don’t pull yours out. It’s a shame, as taking it out can help more air move around in particularly hot weather.

The cheek pads have enough space under their fabric covers to allow intercom speakers to fit. I have the excellent Cardo Freecom 1+ installed, and while it did take some time to get the speakers in a comfortable position, they worked for me. 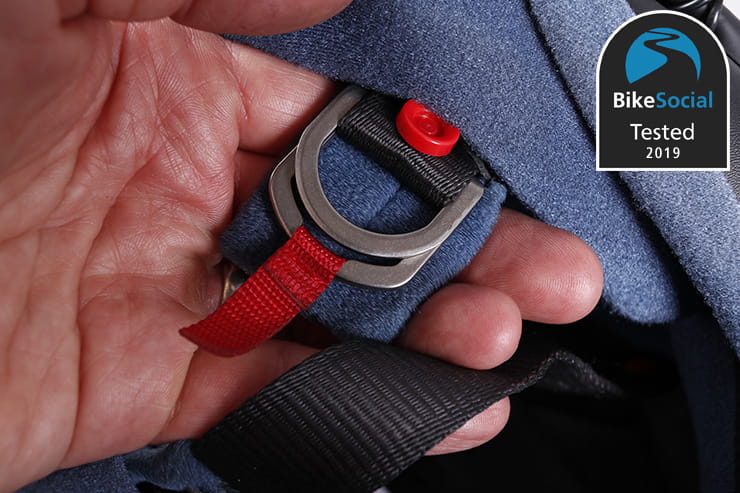 The Profile-V uses a Double-D fastener with soft covers and a popper to keep the loose end in place. It’s not as easy to use as a micrometric buckle, but it gives a perfect fit every time and is a very reliable method that’s preferred my many.

Always try any helmet on for yourself, as fit is extremely subjective and making sure it’s the right size is critical. The Profile-V feels superb on my head, with absolutely no pressure points.

Arai has made the opening a total of 10mm wider and 5mm deeper at the chin – this makes it easier to slip your head in (though I’ve never had a problem before), but the redesigned cheek pads mean that the bottom of your jaw is kept secure. The idea is to also reduce pressure on the cheeks, and I have noticed less force here.

Despite the easier access, the Profile-V doesn’t lift at speed, and never feels like it wants to move around on the head.

I wear spectacles while riding, and the arms fit into the Arai without any problems, the glasses fitting easily on my face.

I’ve yet to ride in any helmet, from any manufacturer, that doesn’t require earplugs; the noise that can very quickly damage your hearing is caused to a large extent by turbulence from your bike’s screen, so no amount of wind-tunnel testing will stop that deep drumming sound.

The Profile-V is not unduly noisy, but you do still need earplugs (though a larger chin skirt would have made it a touch quieter). 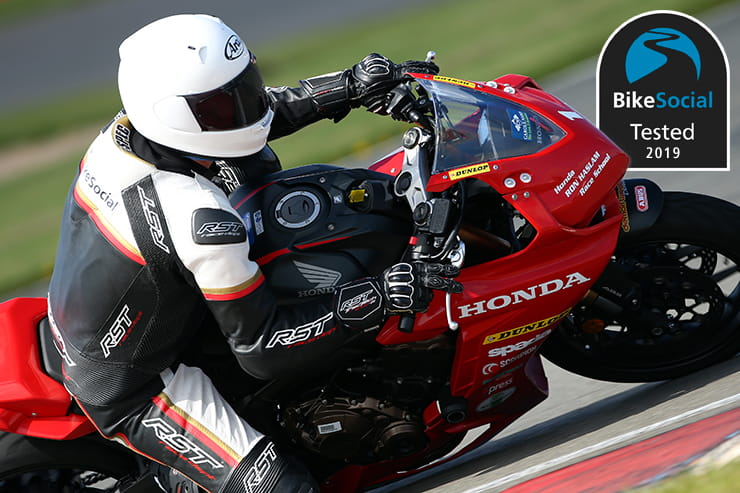 You might look at Arai ownership as something of a cult – owners usually love them, outsiders just don’t get it.

The first helmet I bought back in 1996 was an Arai – it was over my budget but my mate recommended it as worth the investment. More than 20 years later and Arai’s market share has been in decline with the extra features offered by its competition, yet the Japanese company steadfastly refuses to change. While its helmets will of course pass ECE 22.05, that’s only a minimum; Arai believes it is making the safest possible lid by not introducing a gap between the shell and liner to accommodate a drop-down sunshield, or a slot for the lever mechanism.

Yet Arais haven’t always scored the highest in other tests, like the government’s SHARP scheme. Speak to Michi Arai, the CEO, and he’ll tell you that his team’s own testing covers repeated impacts all over the helmet, and that the shape of the shell (and extremely rigid construction) means that they believe their design would be the most effective in a real-world crash.

Is that true? Real-world crashes are impossible to predict, which is why you need a minimum standard. From there, we have to make our own judgement on what to wear. Personally, I feel that having the very tough outer shell that Arai employs is a good thing – on paper the lids are heavier than some others, but on the head they don’t feel it to me (and they certainly don’t drag in the wind).

The Arai visor mechanism comes in for a lot of flack (mainly from those who haven’t used it, or can’t read instructions) but despite some failings, I like it; I appreciate being able to set my visor exactly where I want.

The Profile-V is flawed, and some of its features are a little lacking (like the only partly-removable lining), but it’s the helmet I’ve found myself wearing the most this year. It’s comfortable, it looks great, and I trust it.