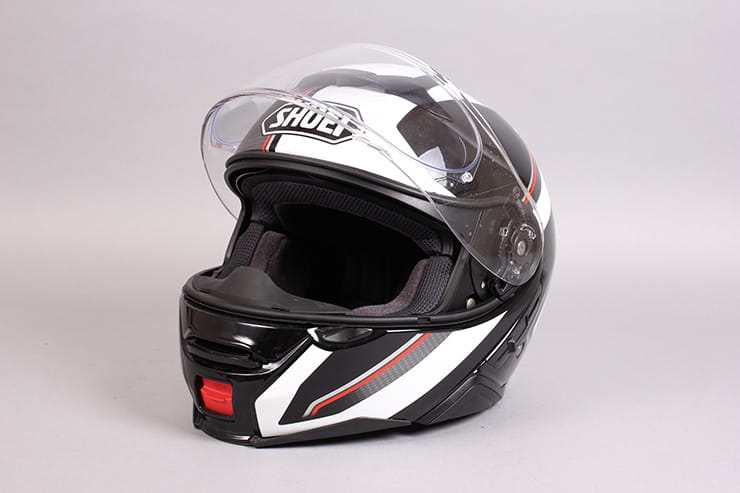 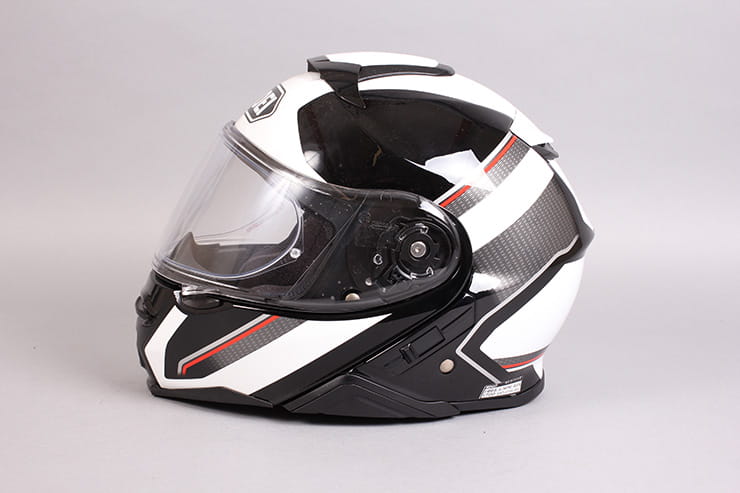 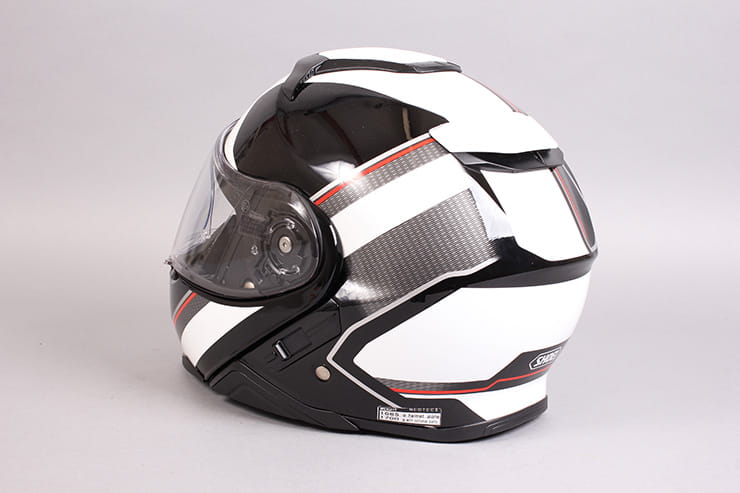 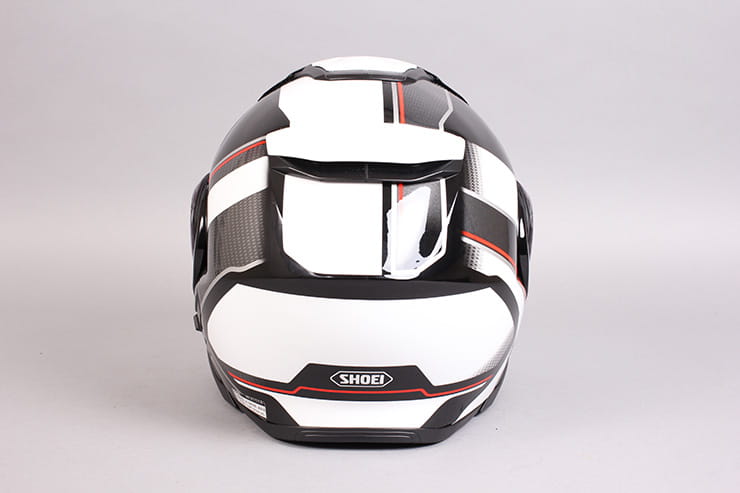 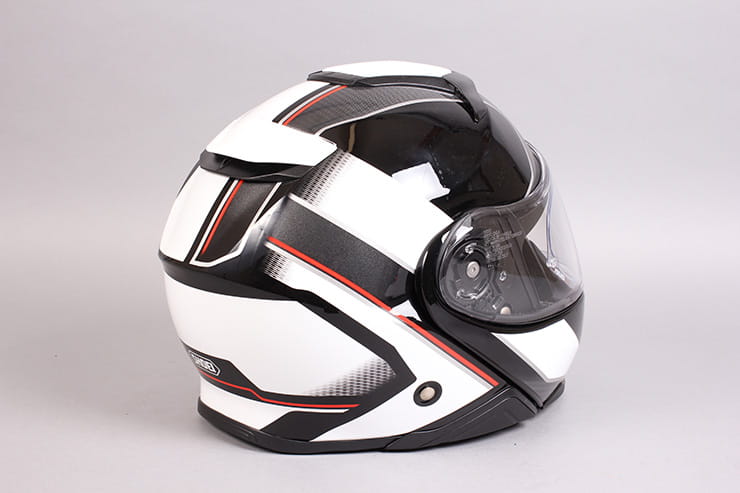 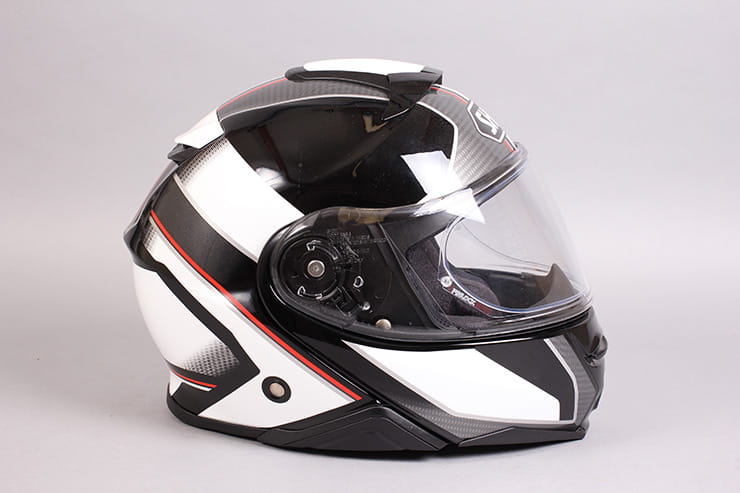 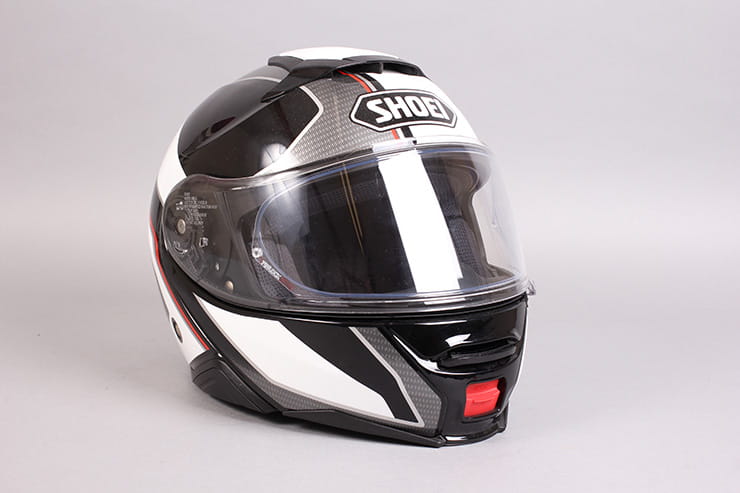 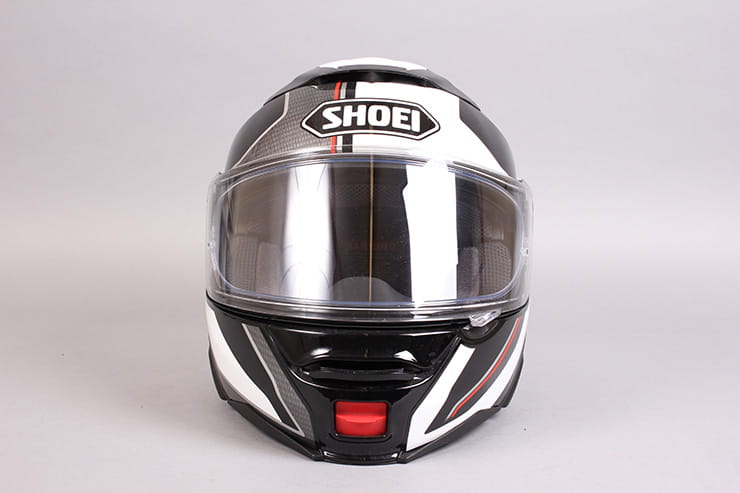 Having used the original Shoei Neotec for more than three years, I’ve ridden tens of thousands of miles in it. Despite testing various helmets for a living, this flip-up – or modular – helmet has been the one I’ve almost always chosen to wear day-to-day.

The convenience of a flip-front is undeniable – just pop it open when you stop for fuel or ask for directions. And if you’re running hot, ride with it open. Of course, at high speed there’s drag, but I used it when touring through France and Spain and found it absolutely brilliant – the convenience and feeling of an open-face, with the security of a full face in an instant.

While many owners of the Neotec – including emergency services bikers – used to ride with it open, technically this was illegal, as the helmet was homologated for use only as a full-face. This has been addressed in the new Neotec II, so it’s now homologated to P and J – as a ‘Jet’ and with a Protective chin guard… 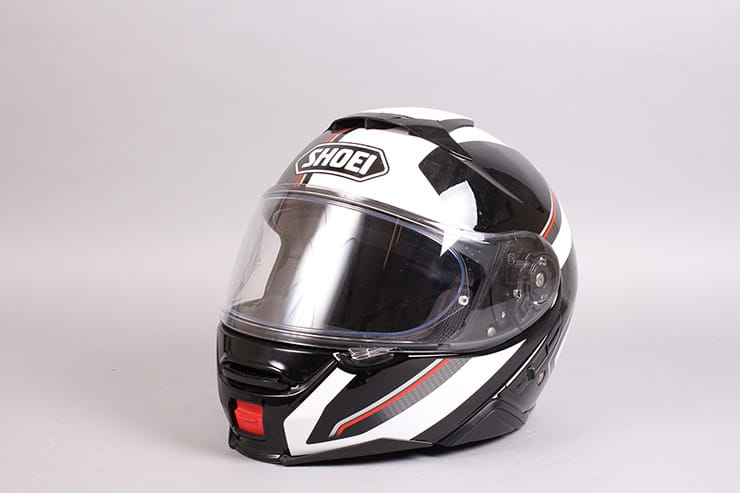 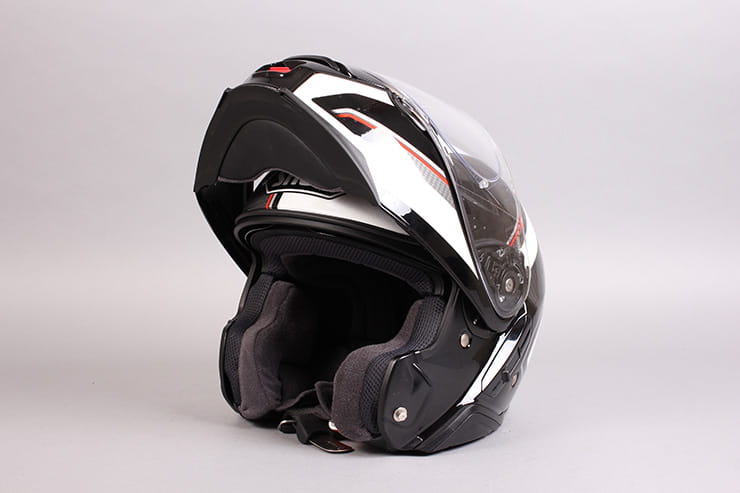 Key changes in the Neotec II

Should I upgrade from my Neotec?

If you got on well with your original Neotec, and its due for a change, then first impressions are that you won’t be disappointed. If you’ve only just bought the original helmet, don’t be disappointed – it’s still one of the best flip-fronts on the market, and gave me great service. I’ve washed the lining several times, and after a good polish, it was always like new. The only real sign of wear on my Neotec was the visor, which had become so scratched that water wouldn’t bead on it, so riding in the rain was a pain. After so many miles though, it’s to be expected that a new visor might be needed. It might be worth noting that the Neotec II will not accept the visor from the original.

If you’re in the shop now, and there’s a Neotec on offer next to a Neotec II, it’s still a great buy. 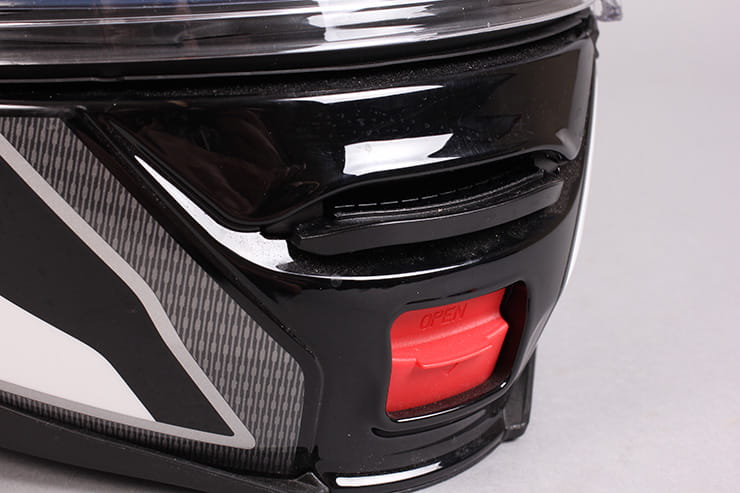 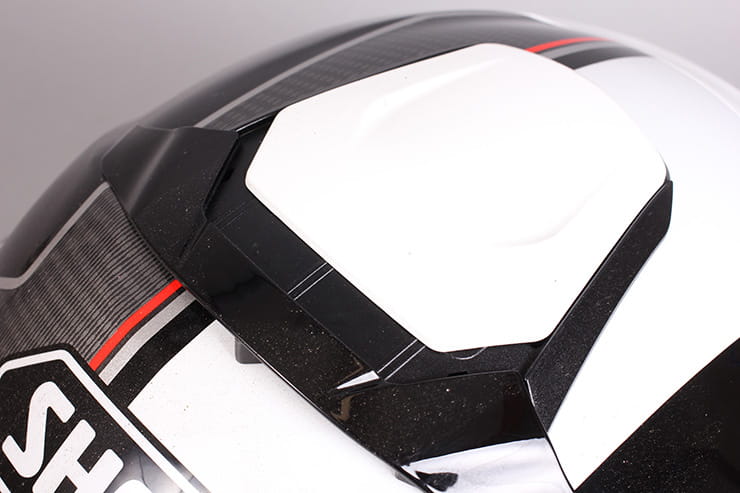 The vents are very effective – just like the original Neotec

Is this the best flip-up – or modular – helmet I can buy?

There are some excellent flip-fronts on the market, and only by trying them, and reading our reviews here, will you know which one’s best for you. Shoei’s Neotec is very popular though, and for good reason – it’s a solid, proven, reliable design.

Isn’t it a bit expensive?

The increase in price over the Neotec is only around £20, which in part has been seen across all products thanks to the devaluing of the pound (it can take a while to filter through as many companies bought product and currency ahead of the downturn).

Relative to many other lids, the Neotec II is expensive, but most bikers will ask what price you’d put on your head. This Shoei is positioned as a premium product, and the previous model certainly showed its build quality over time and use, and having tested many other lids over the past 20 years, I can honestly say that the Neotec should be considered a solid investment in safety and comfort.

What’s been good in the first 250 miles?

The new skirt design definitely works – the Neotec II is quieter and warmer than the original Shoei, and the fit is equally as good.

The chin vent works just as well as the original, as does the top vent (though I’m keeping that shut in this cold weather).

The drop-down sun visor works fine, and while I’ve never been a big fan of them – I prefer a dark main visor – it’s great when you get caught out by the low sun.

The Pinlock Evo works well, with no fogging on the visor at all, and it’s easy to crack the visor open a touch if you need to.

Despite using a stronger latching mechanism to keep the chin-piece open when riding with it up, it doesn’t feel any stiffer in use – it’s very easy to latch up or drop down, and no more difficult than the original. 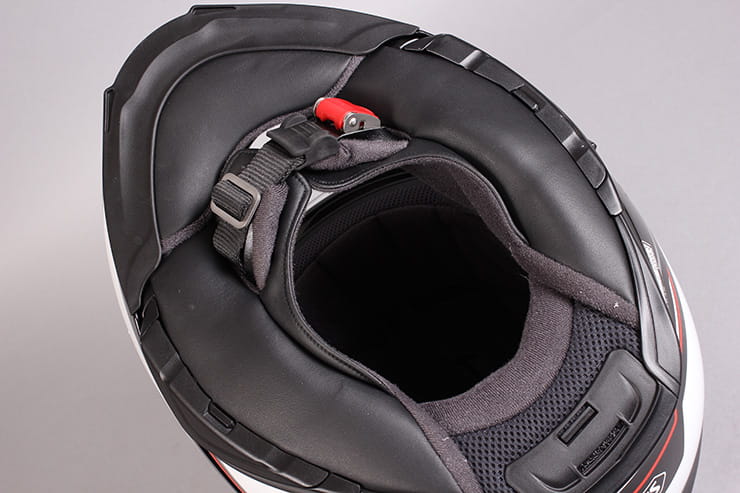 Is there anything to worry about?

Over 50mph, in the winter, the chin vent can be too cold, but because the helmet’s more still inside, my spectacles tend to fog up a little more easily if I yawn. It’s nothing drastic, and it soon clears, especially if I crack the visor open a touch. Ultimately, it’s great to have a warmer lid for the winter; and in the summer – when not riding with it flipped open – there’s still plenty of opportunity for cooling air from the chin, top and exhaust vents.

My only small niggle is that from about 30mph upwards, the visor whistles when just cracked open – it sounds just like a dentist’s drill, but click the visor fully closed and you’re back within one of the quietest modular helmets. You’ll still need ear plugs, but Shoei really has done a good job here. 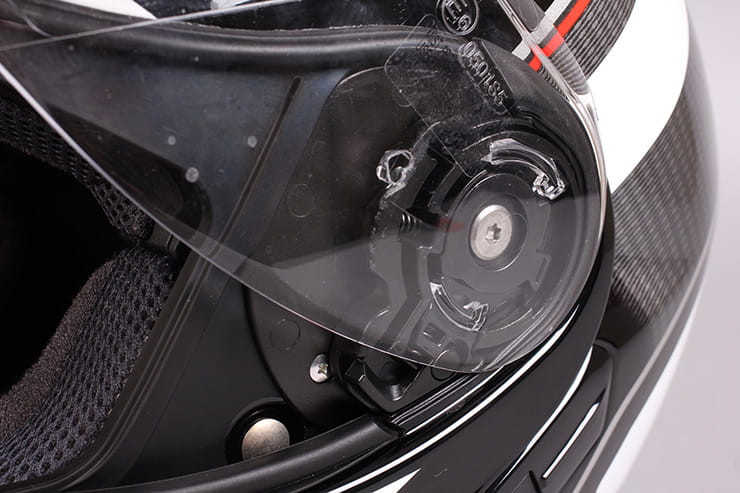 So it’s worth trying one on?

Absolutely; The Neotec was one of BikeSocial’s most highly recommended helmets, and the Neotec II looks to be a very worthy successor. Plain white or black Neotec IIs cost £519.99, while the metallic blue and other colours are £549.99. The graphics, like this ‘Excursion TC-6’ cost £599.99. If you’re a flip-up hater, give one a try – they really do make biking even better…