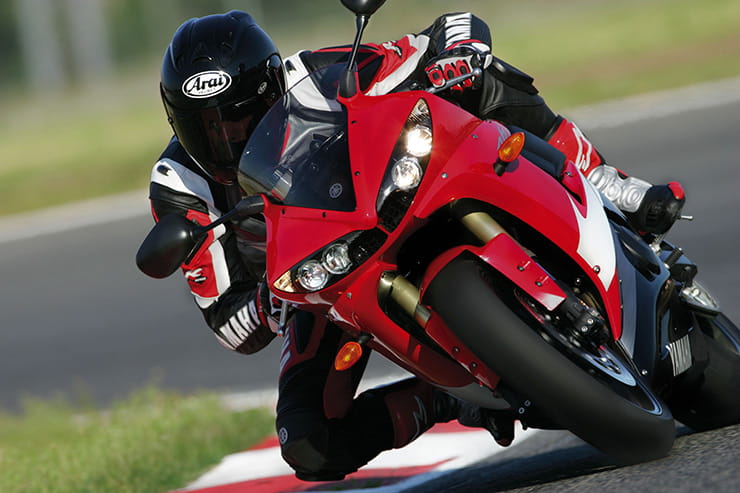 The first Yamaha YZF-R6 to gain fuel injection (and later also radial brakes), to many the 2003-2005 generation is the best of the bunch as while it has a high degree of track focus, its road behaviour isn’t too compromised for the sake of lap times. Very cheap in the used market, if you want a supersport bike that epitomises the glory years of this fabulous class before they went all-out in terms of searching for that final tenth of  a second in the hands of a World Supersport rider, this is the generation to buy…

While the R6’s motor may look similar to the previous generation’s engine, Yamaha claimed it was over 90% new. Featuring forged instead of cast pistons, which are both lighter and stronger, the R6’s cams are also higher lift than before (8.2mm from 7.8mm) to allow the motor to get more fuel/air in and out and therefore produce more power. Interestingly, while Suzuki are traditionally the firm who likes to shout about balancing the crankcase pressure out below the pistons, Yamaha actually took this path on the 2003 R6’s redesign to boost mid-range performance. While the bore and stroke remained unchanged, Yamaha fitted new sleeveless cylinders with direct-plated ceramic-composite bores to reduce friction. The final addition was a brand new 38mm fuel-injection system that used the same carb/fuel-injection ‘suction pump’ hybrid system that was launched on the 2002 YZF-R1. The fuel-injection system was updated in 2005 through larger 40mm throttle bodies and the air intake funnels (which vary in size between the two outer and two inner cylinders) reduced in length. 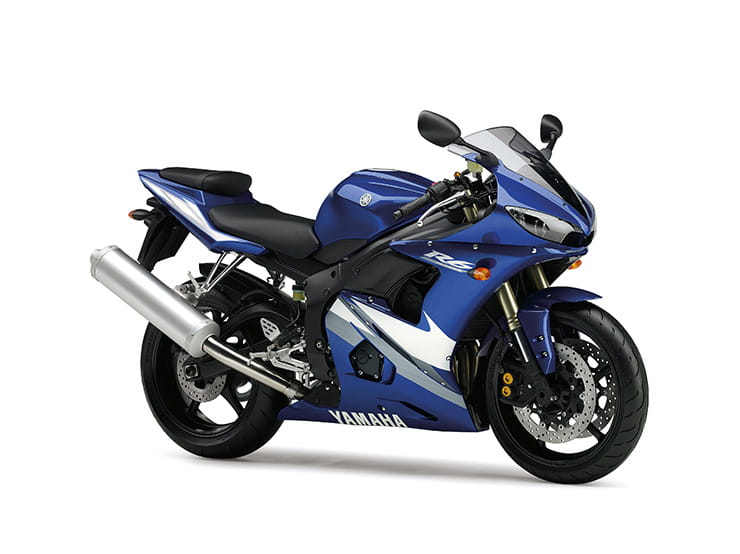 The R6’s all-new Deltabox chassis (which was now painted black) featured just two welded sections where the older generation’s frame has a massive 16! This was achieved through a new ‘controlled filling ally die-casting’ procedure, which uses vacuum pressure to pull the liquid metal into the mould, removing any air bubbles that may have become trapped. The final result was impressive to say the least as Yamaha claimed that as well as being 0.5kg lighter than before, the frame was 50% stiffer and now had the same rigidity as the YZF-R7’s WSB homologated frame! The R6’s frame also featured altered geometry with the off-set reduced to 35mm from 40mm and the trail increased. Like the frame, the swingarm was constructed using die-casting and is longer than before (now 575.5mm) with the pivot point moved 10mm closer to the drive sprocket. The 2005 updated bike featured very slight changes to its geometry (0.5-degrees more rake, 9mm more trail and a 5mm longer 1385mm wheelbase), mainly to accommodate the new ‘conventional’ size front tyre as this model ran a 120/70 instead of the R6’s traditional 120/60 front tyre. 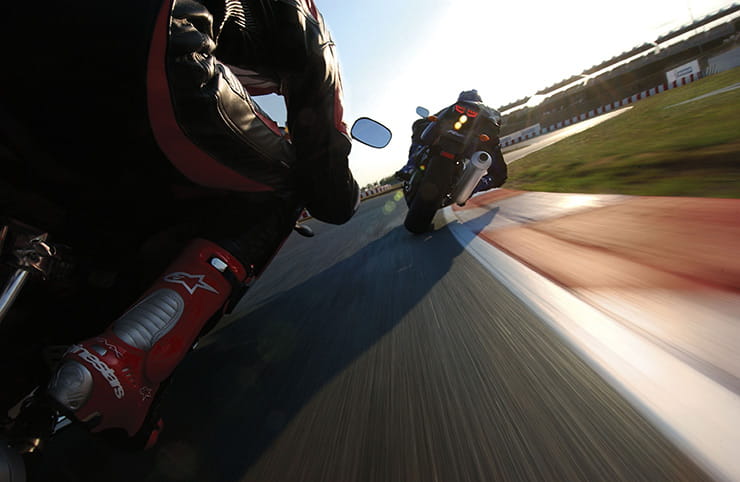 The new fully-adjustable 43mm conventional forks featured thinner stanchions to reduce weight while, according to Yamaha, not compromising stiffness. In 2005 these were replaced by 41mm inverted forks, which are also fully-adjustable. The shock is fully-adjustable and although visually similar, was updated alongside the forks in 2005.

According to Yamaha, the 2003 model’s new five-spoke wheels are 4% lighter than the outgoing version’s three-spoke items, which isn’t much to write home about. The R6 runs four-piston calipers with 298mm discs on the front and a single-piston caliper and 220mm disc on the rear. In 2005 four-piston radial brakes appeared alongside the inverted forks, however the discs remained the same diameter.

Come on, you got fuel-injection, what more do you want? Rossi’s phone number? 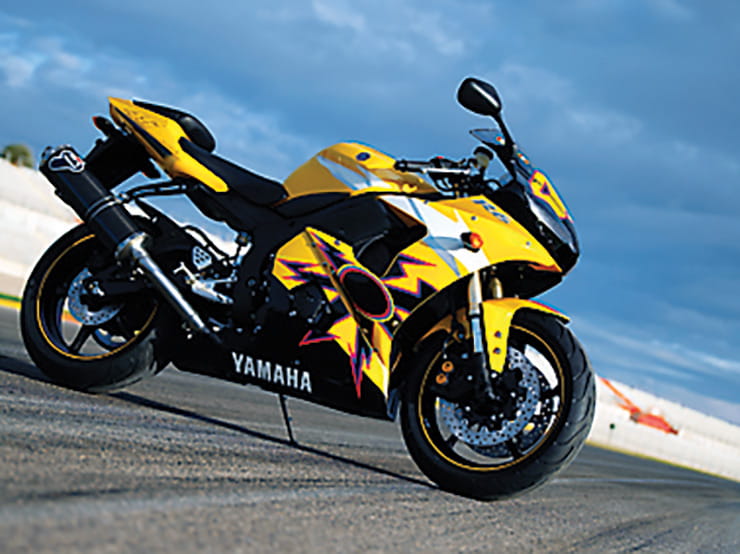 When you hear R6 you imagine a cramped riding position, but compared to the likes of the CBR600RR and later radically new R6, this generation is fairly comfortable. It’s not as relaxed or roomy as a GSX-R600, but it isn’t that uncomfortable. For a supersport bike…

The R6 is a small bike, so pillions aren’t very well catered for. It’s really a solo machine.

While certainly a step forward for Yamaha, the R6 arrived at a point when both Honda and Kawasaki made giant leaps ahead with the CBR600RR and ZX-6R B1H and in the supersport market, the new R6 instantly appeared dated both visually and in terms of technology. While it was there or thereabouts on track, and alongside the GSX-R600 certainly one of the more comfortable bikes for the ride home from the circuit, the buying public lapped up the RR and ZX-6R and that left the R6 somewhat out in the cold. Also, riders distrusted the 120/60 front tyre, complaining it gave them an odd feeling from the front end, which didn’t help the Yamaha’s cause. It was a case of close, but no biscuit for Yamaha, a theme that continued until the arrival of the all-new 2006 YZF-R6.

Deservedly, the R6 is now fairly sought after due to the fact it isn’t as full-on as some of its rivals and as well as a chassis that is brilliant both on the road and track, it has a remarkably grunty motor. Especially considering it is a supersport 600.

If you are after a supersport bike to ride for fun and not just when you want to take your brain out and thrash the pants off something, this generation of R6 is a great buy. If you can afford to be picky, go for the later radial brake model as it is certainly the better machine, but really any of the injected models are fantastic bikes for anyone looking for a great value supersport bike. 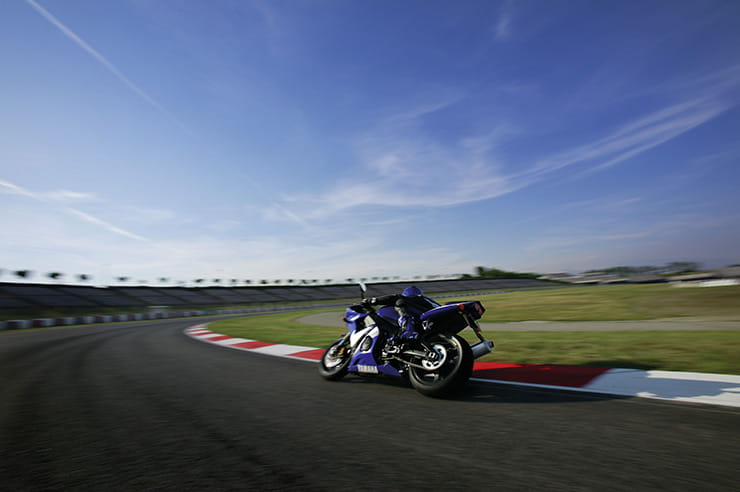 Yamaha receive a lot of praise from owners for the quality of their finish and the 2003-2005 R6 seems to back this up. The only real issue is that some makes of boot can scratch that lovely black finish on the swingarm/frame, so check that there aren’t any marks that have been painted over. Speaking of which, always give the bike a really thorough inspection for crash damage as this age of bike may well have seen the occasional trackday and possibly even a gravel trap or two…

The major concern when buying an R6 stems from the gearbox, which can be a bit weak. Generally they go between first and second gear, so always insist on a test ride and accelerate hard in both gears to see if it hops out. If the lever’s action is sloppy, the detensioner spring may have gone, another common (and often overlooked) issue.

On bikes with the 120/60 front tyre, always check that the bike is actually running this and not a 120/70. Some tyres can rub on the mudguard due to a lack of space for the taller profile, so look for signs of this happening, but the wrong size tyre can actually have a detrimental effect on the bikes handling.

As with any older used bike always give the bearings and suspension a check over for play and any signs that they may need a refresh, but also ensure that the R6 comes with all its keys. The 2003 R6 was the first model to feature Yamaha’s YISS immobilisor system, which requires the red ‘master’ key to reprogram blank ‘black’ keys. Without the red key you will need to replace the ECU should you lose your keys, which is very costly… Some older R6s suffer from throttle position sensor and coil issues, so watch out for warning lights and be wary of a non-starter!

If you want a Rossi Rep, ensure it comes with the correct Termignoni can and that the top yoke carries a number. It’s highly unlikely that anyone will ever try and create a fake rep, however if it is missing these crucial parts it won’t be worth as much as one that is complete come resale time.

The R6 was totally redesigned in 2006 and this new generation has absolutely no similarity with the 2003-2005 model. As well as a new engine, the 2006 R6 features a ride-by-wire throttle, radical styling, screaming 17,500rpm red line, high and low speed damping on its suspension, slipper clutch, the list goes on and on…

In 2005, alongside the inverted forks and radial brakes, Yamaha released the R46 ‘Rossi Rep.’ Only 2500 were made and they feature a hideous paint scheme, numbered top yoke and Termignoni can on a stock 2005 YZF-R6. 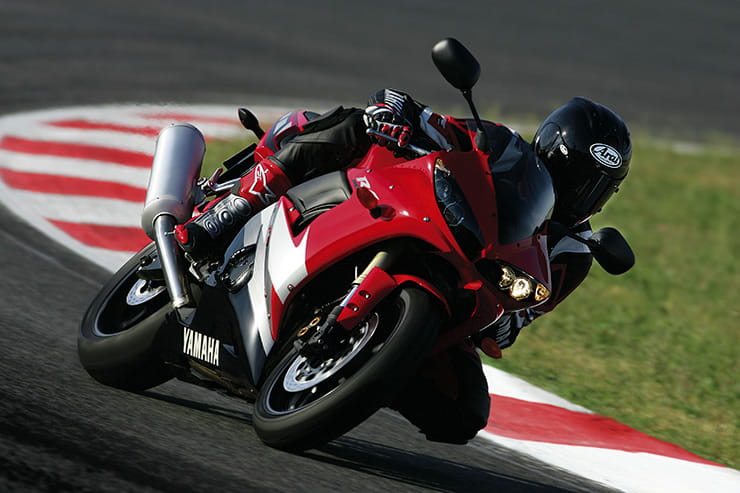