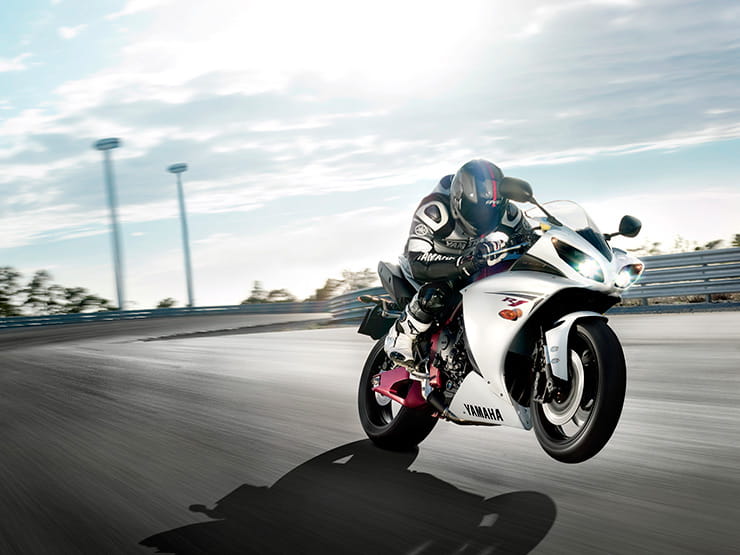 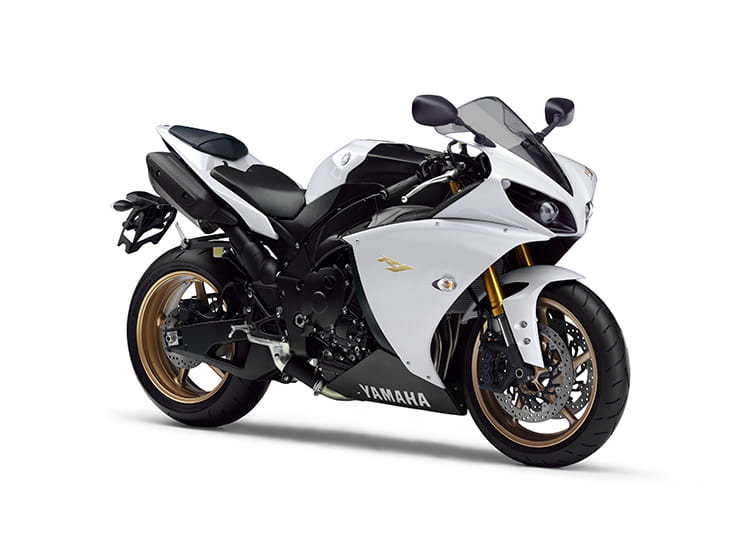 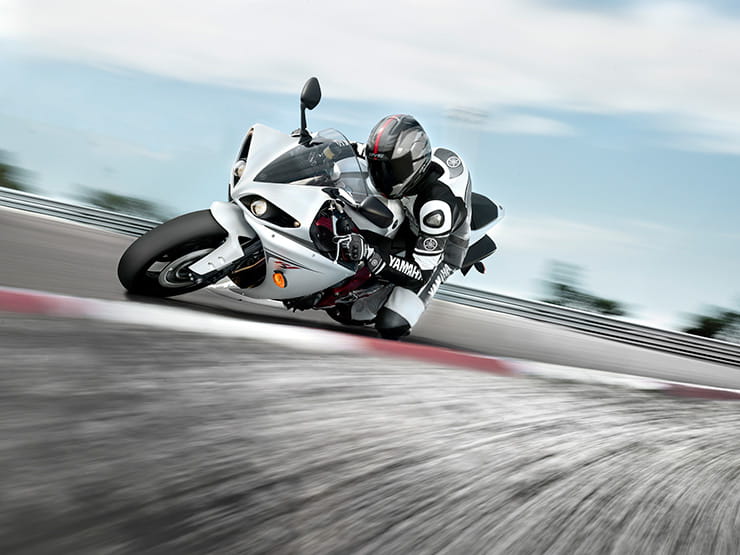 Launched in a wave of excitement, the 2009 Yamaha YZF-R1 introduced the world to a brand new concept – an inline four that sounded and felt like a twin! Borrowing technology directly from Yamaha’s MotoGP project, whose YZR-M1 was dominating the competition thanks to Valentino Rossi’s genius and this revolutionary engine configuration, the arrival of the R1 saw the two-wheeled world learn a new phrase – crossplane crankshaft… The future had arrived and it boasted predictable composite torque, whatever that was… 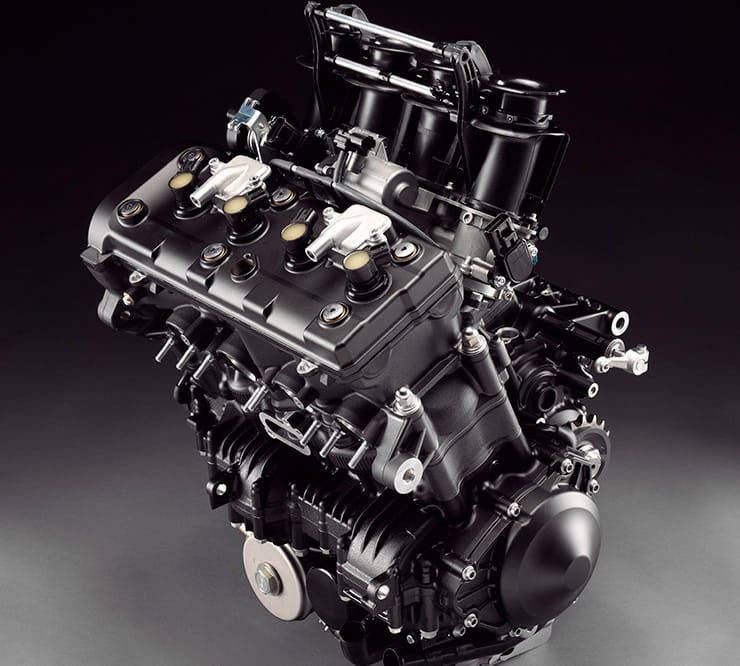 The motor was the biggest advancement for the 2009 R1, however it was also the area that caused the most confusion. Importantly, the crossplane engine (CP4) is not a ‘big bang’ engine, it is something very different. How? In a conventional inline four motor, the pistons rise and fall in pairs (two outer and two inner) and when one pair is at top dead centre, the other pair are at bottom dead centre. As each piston has to (very briefly) stop at the top and bottom of its stroke before it returns, this configuration creates pulses and as a result the crank’s momentum (inertial torque) and torque created by the combustion isn’t fluid. With the crossplane crank, the pistons are spaced with a firing order of 270-180-90-180-degrees (when you look down the crank they are at 90-degrees to one another, hence the cross in the name) which means that when one piston is stationary, there are always other ones in mid-stroke, therefore the crank’s momentum is far smoother. According to Yamaha, this configuration makes the motor’s ‘composite torque,’ which is a combination of the inertial torque and combustion torque, more predictable and leads to improve rear tyre grip and a better throttle connection. There are downsides, mainly a crossplane inline four requires an extra heavy balancer shaft and the fact it generally produces slightly less power than a ‘normal’ inline four, but as the YZR-M1 demonstrated in MotoGP (not to mention Ben Spies in WSB on the YZF-R1), it certainly worked on track. And it had the added bonus of sounding fantastic on the road… 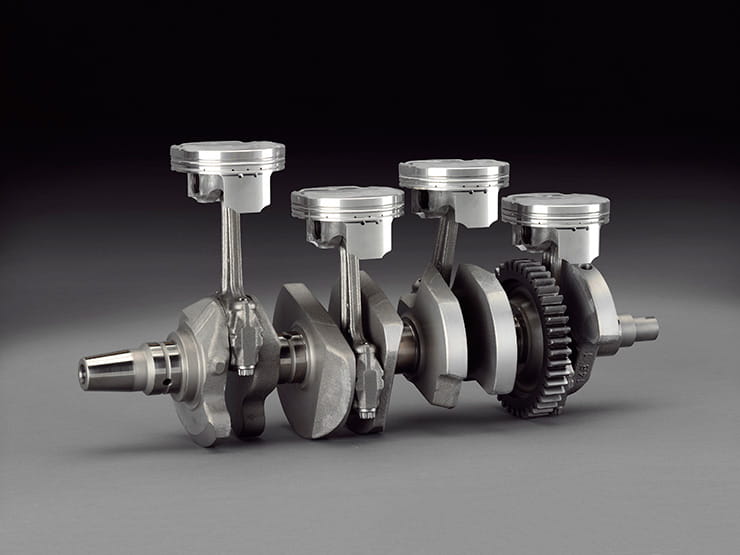 Aside from the crossplane crank, the rest of the R1’s engine was pretty normal. It gained forged aluminium pistons, fracture-split conrods, a slipper clutch and retained the same four-valve head that was introduced in the 2007 YZF-R1, which was the first model to abandon Yamaha’s traditional five-valve design. As with its rivals, the motor was also very ‘over-square’ with a 78mm x 52.2mm bore and stroke giving it 998cc, which was the same capacity as before but achieved through using a 1mm bigger bore and 1.4mm shorter stroke. The engine was unchanged in the 2012 update aside from revised fuelling maps and new exhaust end cans. 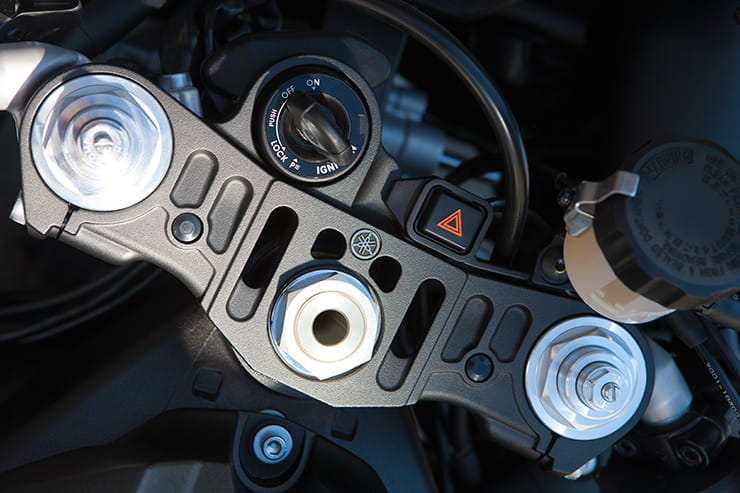 We will brush over the ‘pink’ frame and stick with the chassis’ actual technology, not its challenging aesthetics… A brand new Deltabox frame constructed from aluminium alloy was designed specifically for the 2009 R1 and it shares no components with the outgoing model’s frame with its overall rigidity also altered. Constructed through mating gravity cast sections for the headstock and swingarm mounting points with CF die-cast aluminium sections, which allow for a thinner wall for reduced weight without compromising strength, it also used the motor as a stressed member. Yamaha mounted the motor 9-degrees more upright in the frame than previously, 12mm further back and with the swingarm’s pivot point lower to improve front-end feel and lower the bike’s centre of gravity. The swingarm was also constructed through a combination of gravity die-casting and CF die-cast sections with the pivot point gravity cast and the end-piece a single CF die-cast section. According to Yamaha, this resulted in a lighter but stronger swinger than before. Those who like these things will also be interested to hear the subframe is made from magnesium, something Yamaha first used on the 2008 YZF-R6. The chassis was unchanged in the 2012 update aside from the funky MotoGP-style top yoke and new footrests. 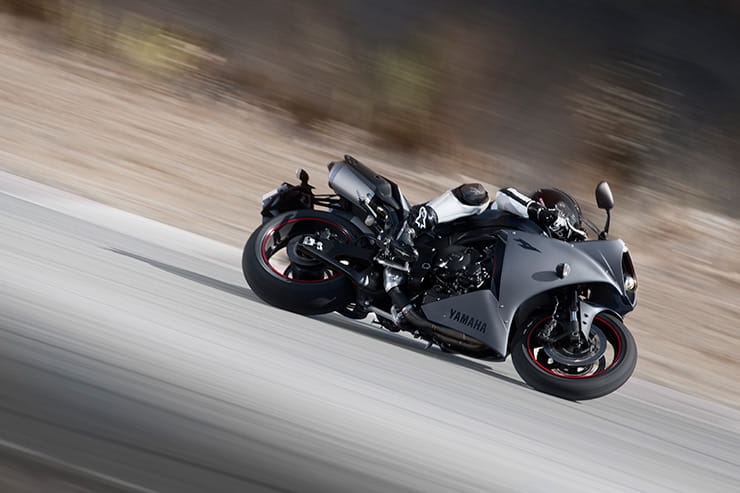 The 2009 R1 was the first R1 model to split its forks’ damping features between legs. The 43mm inverted forks may look conventional, but the left fork controls the compression damping while the right one deals with rebound damping. According to Yamaha this technology, which was developed in MotoGP, allowed them to increase the diameter of the forks’ internal cylinders, stabilising the pressure variances and leading to less cavitation and therefore improved performance and feel. The shock is a fairly standard affair but features high and low speed compression damping adjustment. 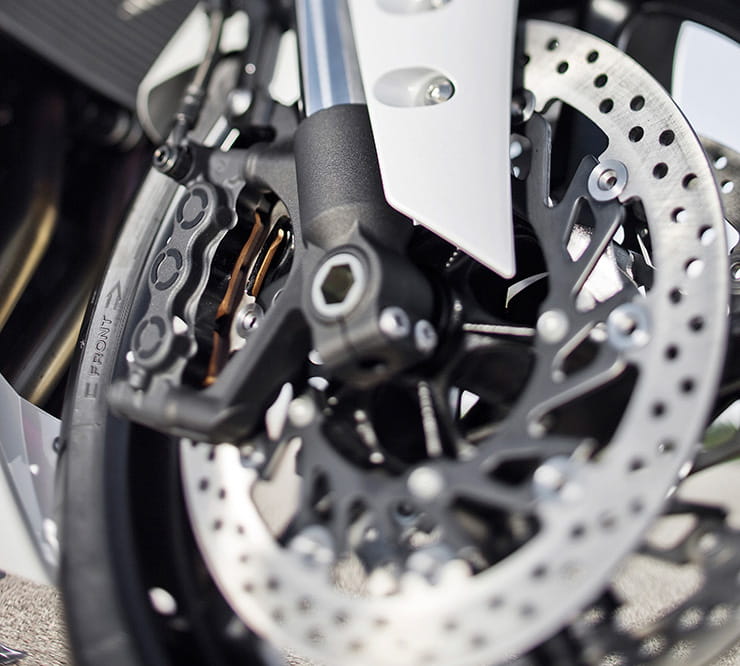 As before, the 2009 R1 used massive six-piston radial calipers to grip 310mm discs, but for 2009 the discs themselves were lightened to reduce the gyro effect on the front wheel. The rear has a 220mm disc with a single-piston caliper. This generation of R1 never gained ABS, it arrived with the 2015 all-new model.

Yamaha were very keen to point out that the R1’s crossplane crank improved grip levels as well as throttle feeling, so traction control wasn’t necessary. Initially this may have rung true, but when the S1000RR arrived later in the year Yamaha were forced to rethink their view on traction control and a six-stage system arrived in the 2012 update. Lacking an IMU, it relied on wheel speed sensors but could be varied via a handlebar-mounted switch and also deactivated. As well as a ride-by-wire throttle (YCC-T) the R1 had variable length intakes (YCC-I), three power modes (D-mode), updated dash (with a lap timer included) and dual projector headlights. 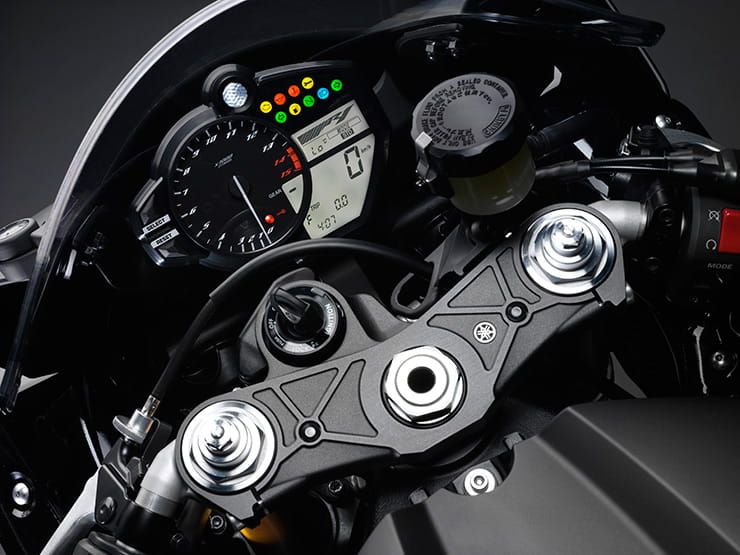 The 2009 R1 may be a sportsbike, but it is far from uncomfortable and is actually quite big and roomy for the rider with a fairly wide fairing. Obviously we aren’t talking a tourer here, but compared to some modern litre bikes it’s the lap of luxury…

While riders of the R1 get a relaxed ride, the same can’t be said for pillions. It’s typical sportsbike back there – cramped, small and not much fun. 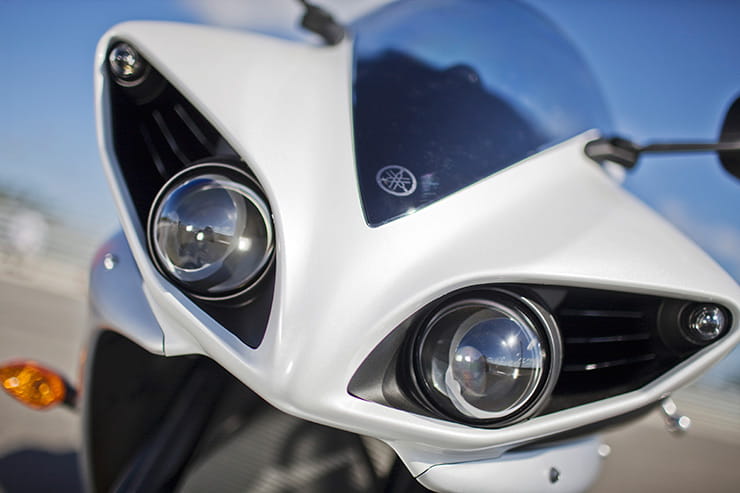 In 2009 the R1 caused quite a stir, mainly due to that engine. Not only did the crossplane bring a whole new feel to riding an inline four, it did it with a wonderful MotoGP-style soundtrack that was a totally new experience.

Initial tests raved about the engine’s character, but the R1’s chassis wasn’t quite as agile as the ZX-10R’s sporty unit on track and the Yamaha did feel a bit chunky. Overall, most testers agreed that the R1 was the best sportsbike in 2009, however its reign only lasted one year (or slightly less) as in late 2009 the BMW S1000RR arrived with a conventional inline four that was not only more powerful, it was backed up by a staggering array of electronic assist that the R1’s crossplane simply couldn’t match. And then the financial crisis hit, prices of Japanese bikes went through the roof and sales all but dried up.

If you want a spirited and easygoing, yet still bloody fast, litre sportsbike go out and buy an original generation crossplane R1 – they are wonderful bikes. Yes, they are a bit on the lardy side, but that crossplane engine is a thing of great beauty as well as a really endearing sound and feel that is totally unique. While there is no denying that modern litre bikes, and especially the radically updated R1, are more advanced and deliver improved handling as well as bags of power, the overall balance and feel-good factor that this original generation provides when you ride it makes it very special. It’s just a great road sportsbike – made even better with a set of loud pipes fitted! 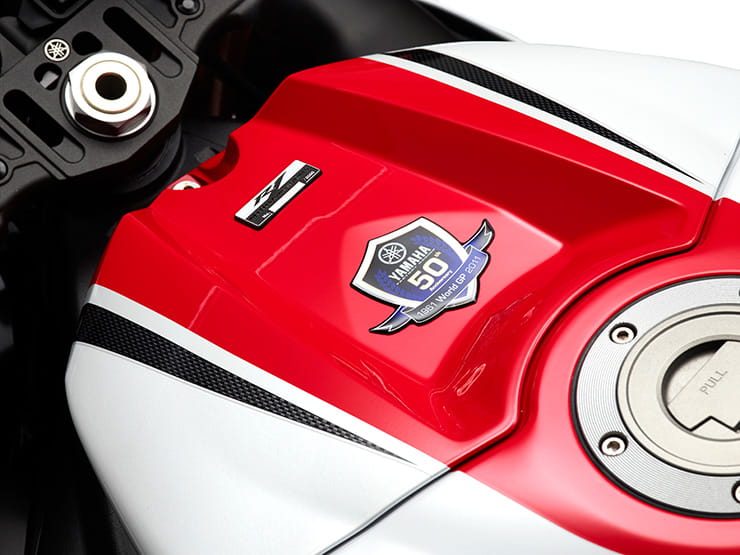 As with all first generation bikes, the very early R1 had a few teething issues. A lot of owners reported that the clutch would slip or judder and a fair few were replaced by Yamaha, so always check for any nasty noises or clutch-slip on early models. The cam chain tensioner is noisy, it’s something that is just a feature of the bike, so expect a bit of a rattle on start-up but be very wary if the bike has any aftermarket electronics fitted. While Power Commanders and the like are required (or an ECU remap) if you want to adjust the bike’s fuelling to sort its slightly snatchy throttle response, quickshifters can often knacker the gearbox, especially if not set-up correctly. And the same is true for downshifters/auto-blippers. On a test ride always check for any missing cogs or it hopping out of gear. If you want traction control, the updated 2012 model brings a factory-fit system, which is actually very good, and also in 2012 the R1 was released in a ‘limited’ edition Anniversary red and white paint scheme, which wasn’t really limited at all, so don’t pay any extra for it. Overall the R1 is very reliable, but a fair few do go on track, so always inspect it well for any crash damage.

The original crossplane R1 was updated in 2012 when it gained 6-stage traction control, new suspension settings and an YZR-M1-style top yoke. In addition the exhausts were restyled with new ends, the fairing altered and the lights tweaked. It was replaced in 2015 by the totally new YZF-R1, which is a ground-up new model powered by a new generation of crossplane engine. 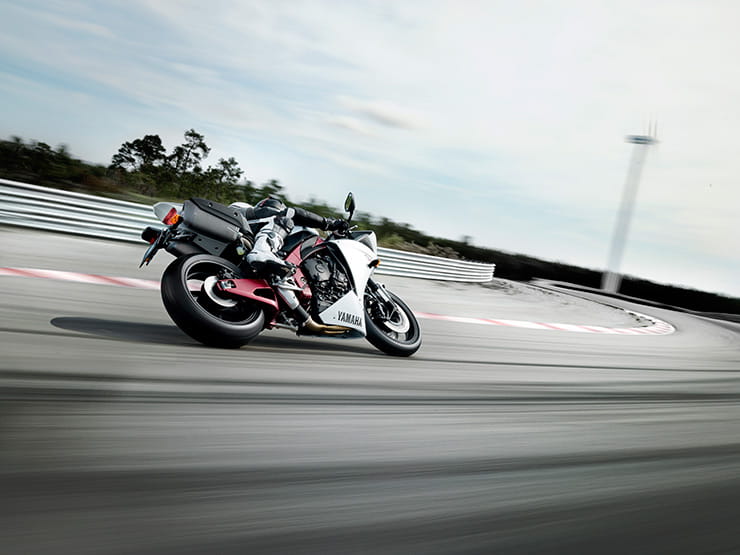 Due to the financial crisis, and the resulting dip in bike sales and therefore lack of machines imported from Japan, this generation of R1 is actually rarer than you would expect in the second hand market. Although that’s not to say you can’t find one, it’s just that they tend to hold their value well. An early model will set you back in the region of £5500 in a private sale, but dealers are asking closer to £6500 or even £7000 for a ‘pink frame’ bike as it is falling under the ‘future classic’ banner, which is a bit debatable. The updated 2012 model’s prices start at about £7500 with a final year (2014) bike costing in the region of £9000.