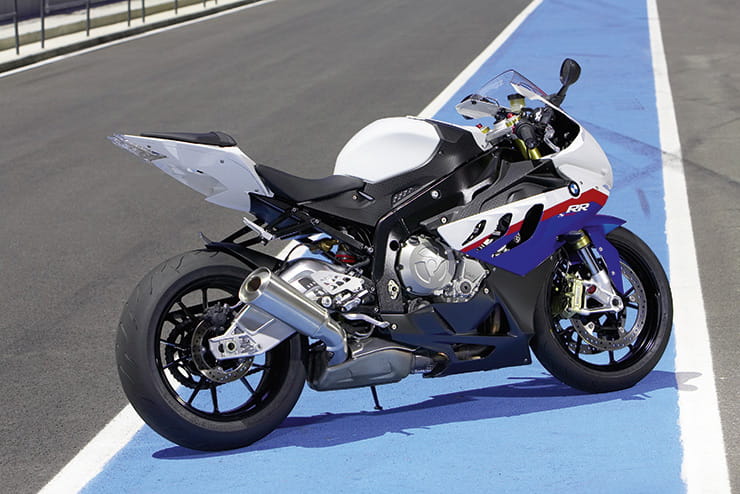 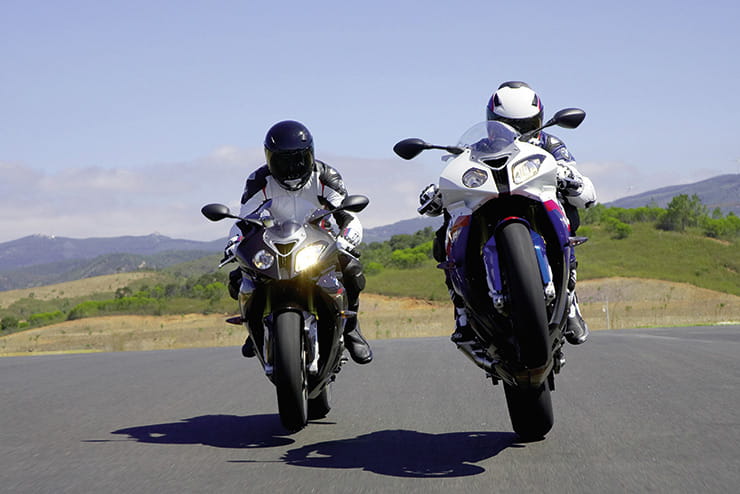 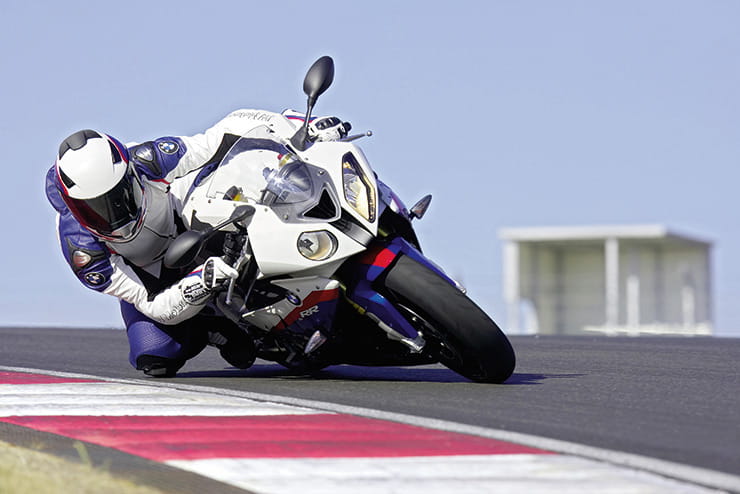 In 2010, when the Japanese manufacturers were on their knees due to the financial crisis, BMW dealt a killer-blow to the superbike class. The BMW S1000RR arrived and boasted the most advanced electronics package yet seen on a mass-produced road bike, not to mention a stunning motor and track-derived chassis. It re-wrote the sportsbike rulebook, instantly dominated the class and forced the Japanese manufacturers to up their game or get left behind. The electronic revolution had arrived, and it carried a blue and white roundel on its flanks… 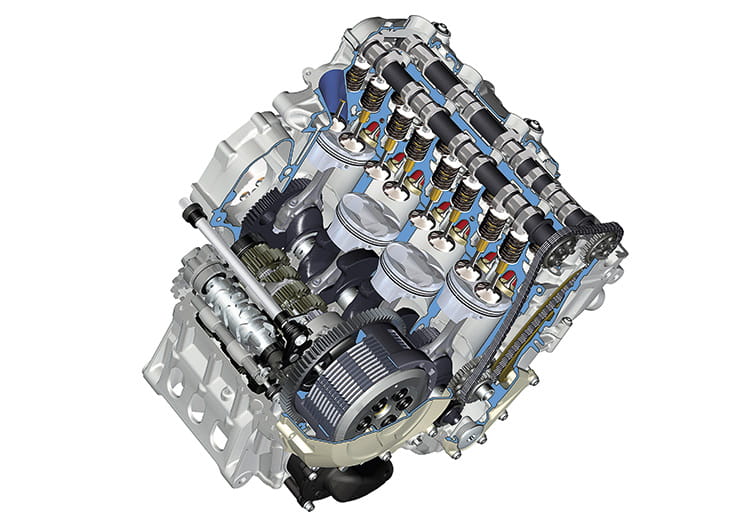 Surprisingly, BMW actually based a lot of the S1000RR’s inline four motor’s development around the Suzuki GSX-R1000 K5 as it was such a tractable engine. However that’s about where the similarities ended…

The 2010 S1000RR has a very ‘over-square’ motor, which at the time gave it the biggest bore and shortest stroke (80.0mm x 49.7mm) in its class. Running a capacity of 999cc, this huge bore allowed the RR to rev like a demon, resulting in power figures of 190bhp and 82.5lb.ft of torque thanks in part to huge 33.5mm intake and 27.2mm exhaust valves that were made from titanium and were, again, the biggest in its class. Add to this a head that ran rocker arms instead of a bucket and shim valve train, extensive use of friction-reducing materials and techniques, fracture-formed conrods, lightweight pistons (253g each), a slipper clutch, variable length intakes and much, much more and the S1000RR’s engine didn’t only set the benchmark for the rest to try and beat, it smashed it out of the park. Oh, and the motor only weighed 59.8kg, making it the lightest engine in its class. But BMW didn’t stop there… 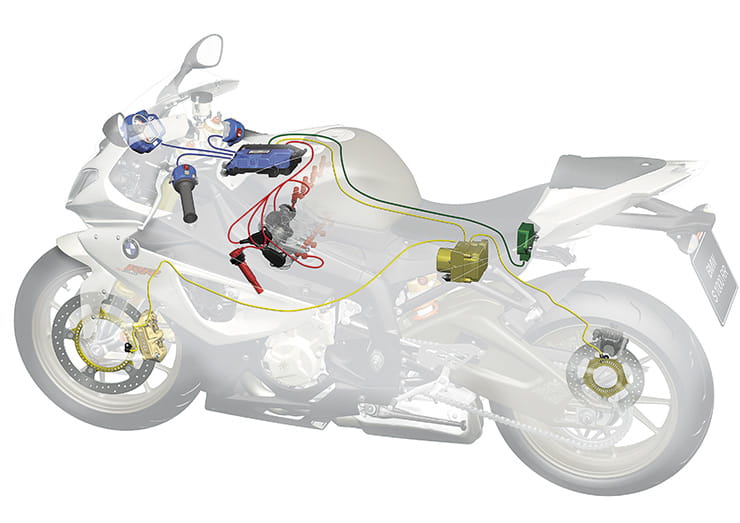 To be fair, the RR’s chassis isn’t anything too radical. You get the usual track-focused geometry and the aluminium bridge frame uses the engine as a load-bearing element, but BMW’s frame consisted of only four castings for strength. Manufactured in a tip-casting process, the head and two side sections have their mounts integrated into them, while the rear section is made in a low-pressure-die-cast. The whole frame was then welded together by robots in BMW’s Aluminium Competence Centre in Berlin.

As with most modern sportsbikes, BMW gave the RR an extra long aluminium swingarm for greater mechanical traction, something that the compact size of its new inline four motor assisted in achieving. The length between the RR’s swingarm rotation point and rear axel is actually 593mm, the longest in its class… 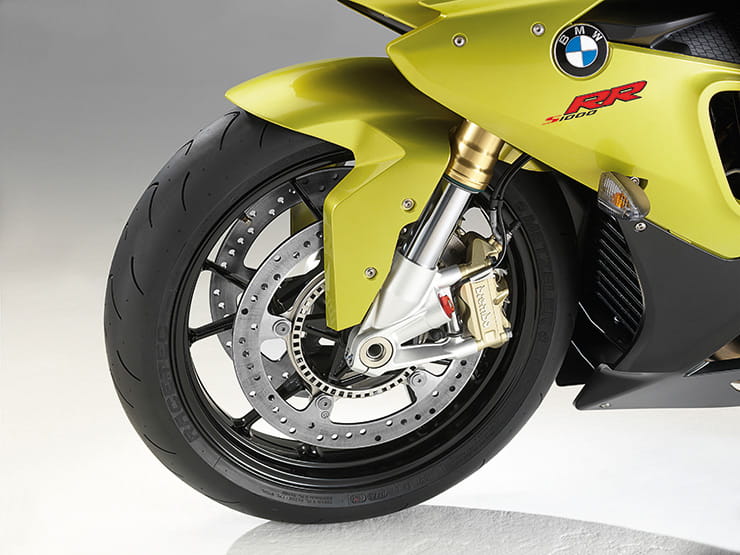 While later RR models (starting with the HP4 in 2012) run semi-active suspension, the first generation has conventional units. That said, BMW did do something very different and clever with them. The 46mm fully-adjustable inverted forks (the Japanese were generally running 43mm) have the position of their damping adjustment marked on the forks’ tops and the adjuster itself can be turned using the bike’s key, which is a simple and very elegant solution to the issue of remember how many clicks of adjustment you have added. The monoshock is also fully-adjustable and the upper strut has an eccentric adjuster to allow the rear end of the bike to be raised by 10mm. 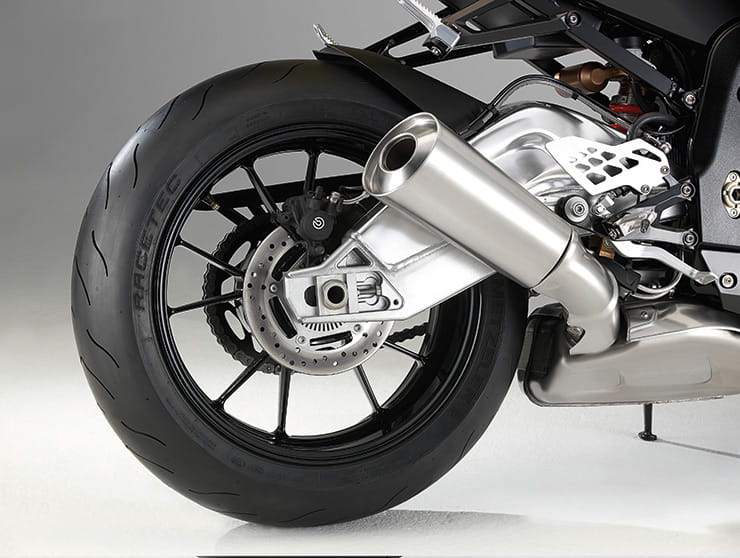 The RR comes with four-piston radial Brembo brake calipers that grip 320mm floating steel discs with a radial master cylinder and steel braided lines as standard. However what made the RR special was the fact it could be specified with BMW Motorrad Race ABS as an optional extra, which altered the brakes’ pressure and sensitivity according to the rider mode selected and also linked the front and rear brakes. There was even a ‘Slick’ mode that disabled the ABS on the rear brake when using the foot lever but still kept them linked when the front brake was applied – allowing riders to drift the rear into bends. Provided you were skilled enough…

The S1000RR arrived with the first generation of angle-sensitive electronic assists, which were an optional extra in the Sport package. A gyroscope located under the RR’s seat gave the bike the ability to calculate its lean angle and this data was then fed into systems such as the Dynamic Traction Control (DTC) and Race ABS to alter the way the bike’s electronics responded. This new system linked to the ride-by-wire throttle and also meant that the bike’s throttle character varied depending on the power mode selected so that ‘Rain’ mode gave maximum DTC and a less responsive throttle while ‘Sport’ increased the power and reduced the DTC and ‘Race’ and ‘Slick’ gave you the full-berries. Essentially, the whole bike’s electronic assists were linked in a network – the future had arrived… 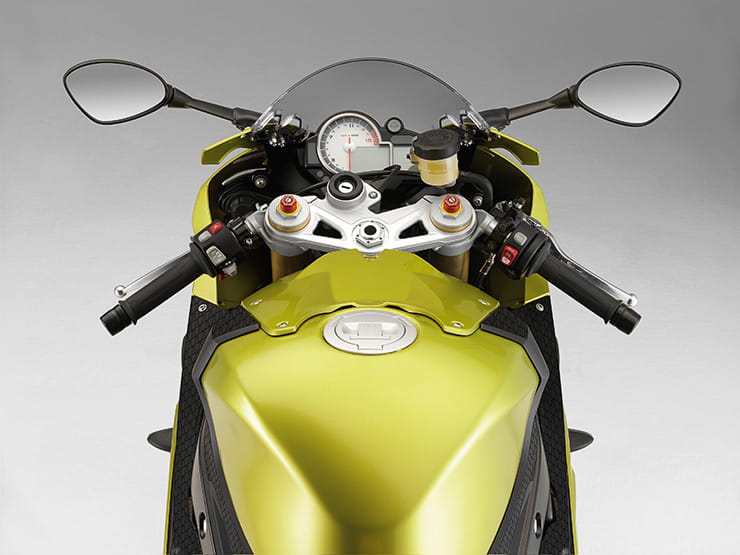 The RR’s riding position has a feel of the old-school about it and it is far roomer than some of the modern litre bikes that are overly track-focused at the expense of rider comfort. Sadly, however, heated grips only arrived in the 2012 update…

It’s a race bike, so pillions aren’t very well catered for. There is a seat, but it’s perched quite high, putting the pillion in the wind flow, and it’s not very big either! Or comfortable… 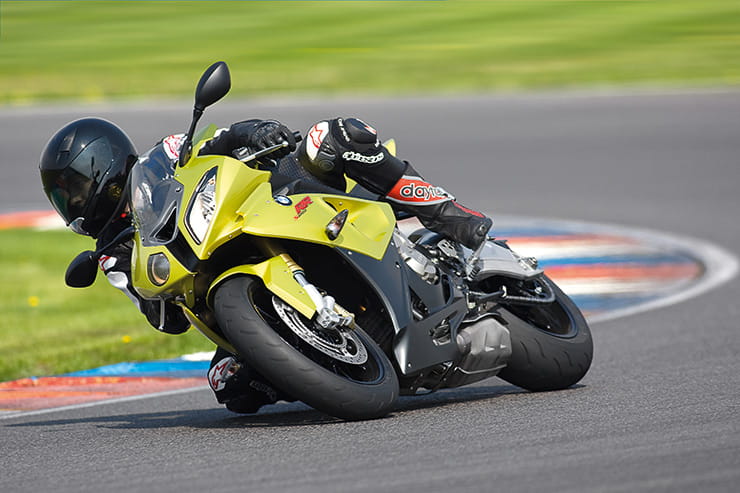 Back in 2010 the S1000RR was a genuine revolution, an incredible motorcycle that swept all away before it. The fact it upped the power game by a few bhp was besides the point, what this bike managed to do was through its incredible electronics give riders who were a little bit scared to open the throttle the confidence to give it a big handful. It moved the whole litre bike game a huge leap forward and when you consider the likes of the stubby Fireblade, crossplane R1 and aggressive ZX-10R were its main rivals, to so comprehensively blow them into the weeds took some doing. And not only this, the RR also firmly established BMW as a motorcycle manufacturer that did far more than just ‘pipe and slippers’ bikes such as the GS or RT. BMW were a full-on superbike manufacturer and they even took the S1000RR onto the world scene in World Superbikes. However with hindsight, this wasn’t the best move… 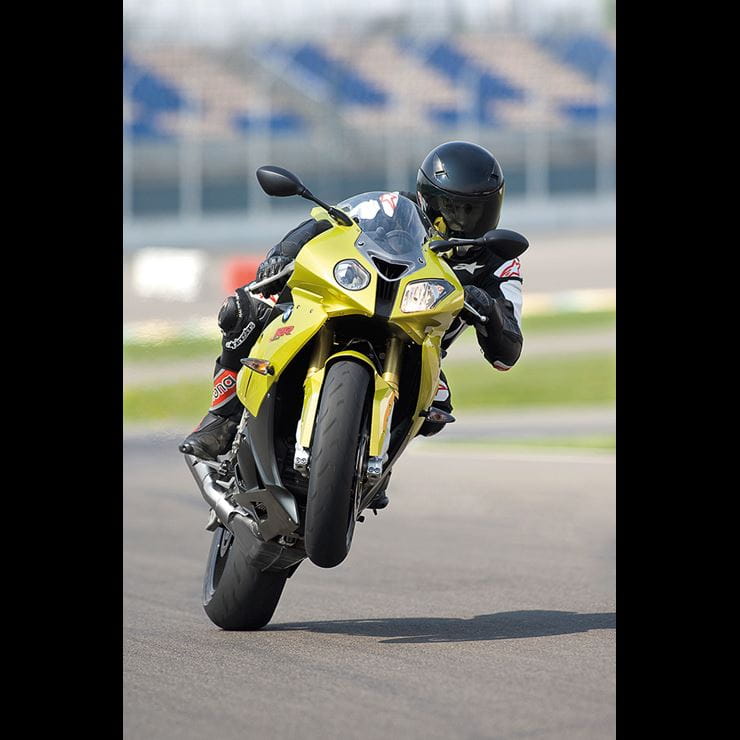 An early S1000RR remains a very, very accomplished sportsbike and you would be a fool to call a 190bhp machine underperforming. The truth of the matter is that the heart of the bike – its motor, chassis and suspension – haven’t really radically altered over the years, however its electronic systems have and that’s the difference you spot when you ride a newer RR compared to the original model.

The first generation of RR feels a bit raw and aggressive compared to modern machinery due to its slightly more basic electronics failing to calm the brutal power down to such a degree. In some ways this is no bad thing at all as it gives the machine stacks of character and a thrilling nature, but by the same token it can be a little intimidating. There again, you don’t buy a litre sportsbike to have a relaxing ride on – do you? 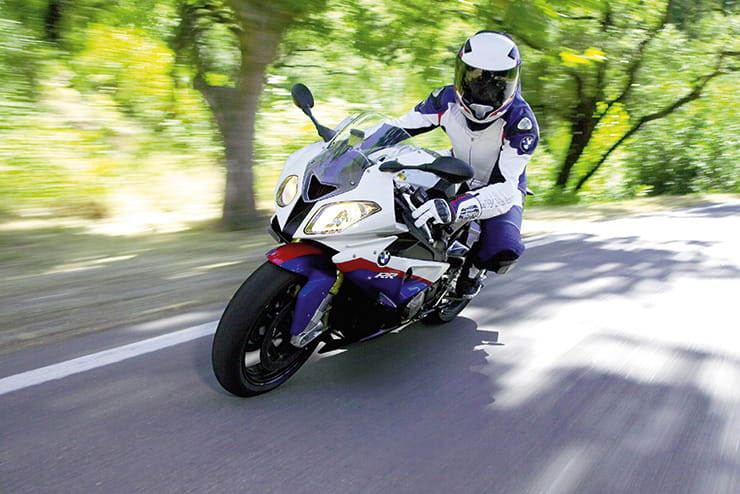 The very first generation of S1000RR was actually sold in standard form, which lacked the RR’s advanced electronics that the Sport package brought with it. Very, very few sold as every owner wanted the full-Monty, but there are one or two out there and they may be cheap, but are definitely best avoided as you can’t retro fit any of the electronic assists.

Very early its life the RR had a few engine issues, but these will be well ironed out by now and as it is only an eight-year-old bike, the chances are that it will come with a full BMW service history, which is certainly well worth looking out for as this ensures updates and recalls have been competed. Servicing can also be quite costly, especially as the ABS system needs its fluid changed every two years, so ensure a major service isn’t in the bike’s near future.

When it comes to optional extras, more is always a good thing as BMWs sell on their specification. You want a fully-loaded bike with Race ABS and DTC and other items such as BMW’s HP range of accessories are also well worth having. Buyers love to see the HP Akrapovic exhaust and it is worth paying a few quid more for it as it isn’t cheap to buy separately.

Always check for any signs of crash damage as some RRs did end up on track, so be wary of carbon frame protectors or any swingarm protectors, and also give the switchgear a careful inspection. A few owners have had switchgear failures, so ensure all the buttons work, and some have even reported stickers peeling off! There are a few internet stories of gearboxes wearing, but these are rare, and the sidestand switch can pack up, but on the whole the RR seems a fairly reliable bet.

The S1000RR was updated in 2012 with a revised chassis, upgraded electronics and a new look that moved a few of the vents in the fairing around. It was more of a refresh and subtle update than anything else. The HP4 arrived in late 2012 and brought with it a £15,500 price tag as well as the option of semi-active suspension and lightweight wheels, launch control and a few electronic updates. The RR was tweaked again in 2017 when it was made Euro4-compliant and the Pro electronic systems added. Interestingly, this generation is sold as a single seat model, the pillion seat and pegs are an optional extra… 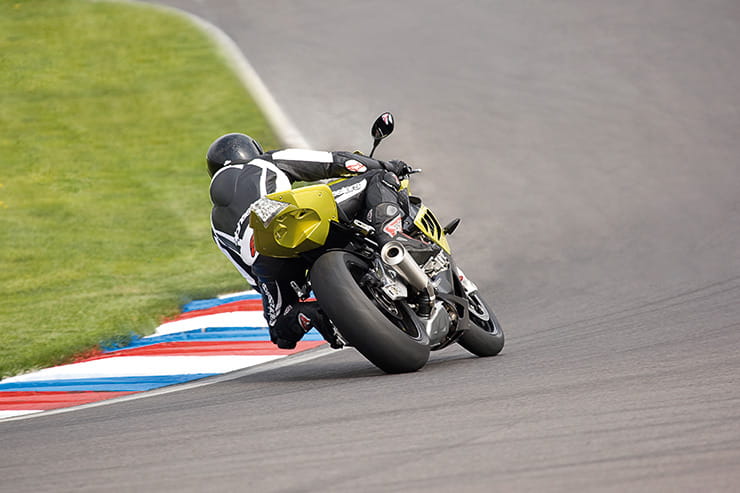