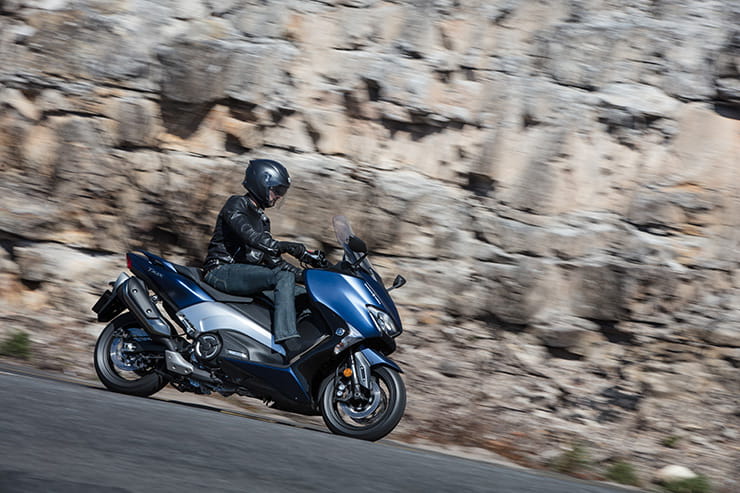 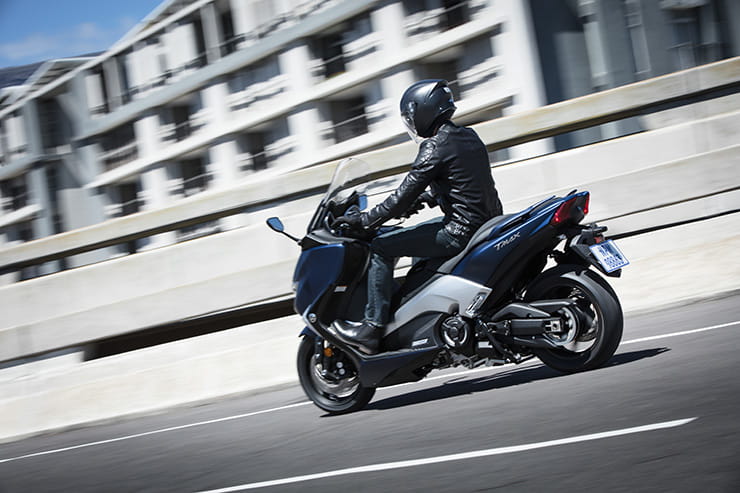 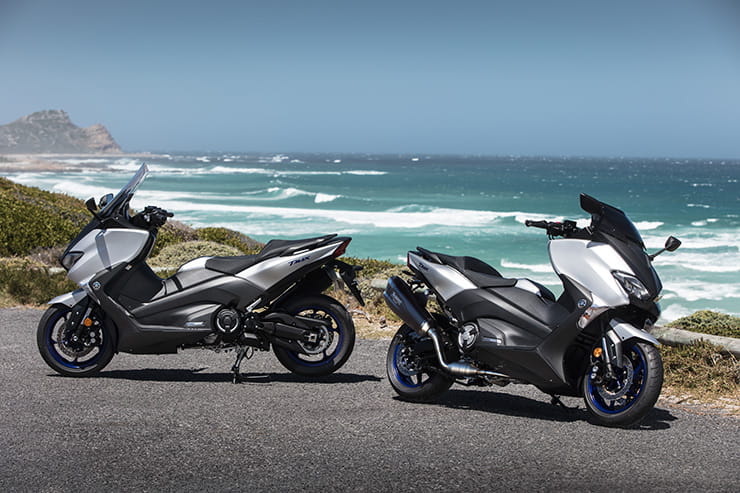 If you spent any time in Europe’s most vibrant cities in Spain, France or Italy this summer and you’ll have most certainly be blown away by the volume of big scooters flying around – bigger than ever, 50s and 125s are being replaced by 250s and 400s. Probably noticeable because of the muppets riding them wearing flip flops and shorts. OK, so if we disregard the poor choice of safety clothing or footwear by most continental riders, the point is their popularity is huge in Southern Europe and it isn’t matched in the UK which is crazy because of their simplicity to use, comfort, power and versatility.

In fact, even though the UK is such a small market for the most maxi of Yamaha’s maxi-scooters, the Japanese manufacturer has still sold 250,000 throughout Europe over the past 16 years, more than 2/3 of which across Italy, Spain and France.

I know how good maxiscooters are for commuting, I owned an XMAX 250 for a year while living in London – they are ideal for darting around the city in comfort and style while the underseat storage was used for shopping or to store my helmet/lock. Super frugal, cheap to run, smart-looking and easy to ride with room for a pillion – what’s not to like?

So, a little earlier this year we flew down to Cape Town, on South Africa’s southern coast to the world media launch of the 6th generation of Yamaha’s popular maxiscooter, the TMAX. With a 530cc parallel twin producing a little over 45bhp, the big, luxury twist ‘n go has been a big seller for Yamaha since its introduction back in 2001.

For 2017, the latest edition features a range of changes to the bodywork, engine, chassis and electronics and is available in two versions for the UK - TMAX (£9,599) and the top spec TMAX DX (£10,899). The base model comes in just the one colour, Midnight Black, while the more heavily specced DX is available in either Phantom Blue or Liquid Darkness.

At that price, you could buy an MT-10 for just £100 extra so what goodies does the DX version of the TMAX offer to warrant its price tag? At 216kg it’s no featherweight, but it has been on a diet since the 2015 incarnation and now weighs 9kg less thanks to a new lighter weight chassis, near rear frame and V-Belt.

A refined motor fits in a newer position to help balance the bike while styling changes offer a more compact look yet a larger underseat space, one of the TMAX’s biggest selling points. 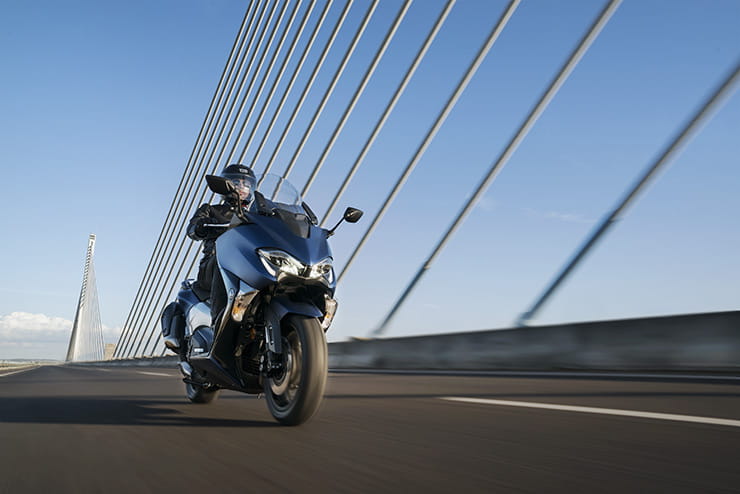 New headlights, taillights, a plush multifunction TFT instrument display with intuitive, handlebar-mounted controls make it a whole lot easier to play with the brightness of the display, reset your trip or scroll through the 10, yes 10, options of heated grips. Plus, if you’re an all-weather rider and are extra chilly then the heated seat should come in handy. All of which might not win any design awards but are intuitive and easy to operate. 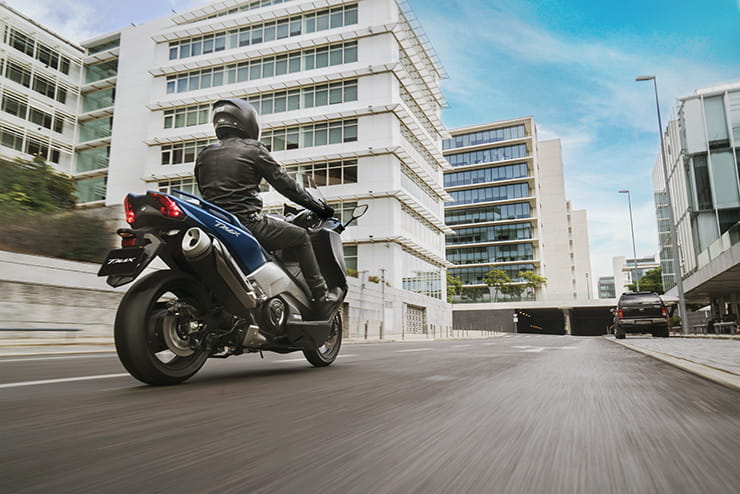 The engine refinements include a new air cleaner box, injectors and oil cooler and filter plus a redesigned crankcase and exhaust. New wheels and tyres plus two engine running modes; T for Town and S for Sport. The DX also gets cruise control, an electronically adjustable screen with a 135mm range and adjustable rear suspension.

Equipped with the new Vodafone tracking system designed to assist with plotting routes and speed limits but mainly to track where the bike is at any time. 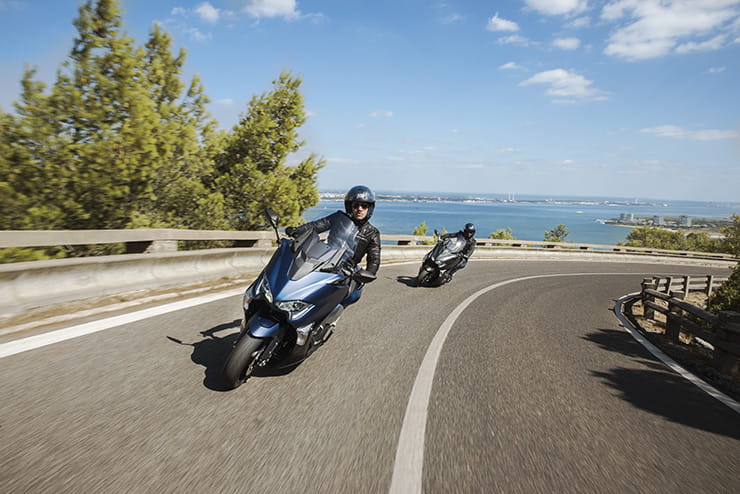 On the road and I got to test the TMAX DX over 100 miles of Cape Town mixing up the test route to combine a splattering of Cape Town's city centre doing battle with rush hour traffic and plenty of stunning, sweeping, fast, beachside roads that have shown both the TMAX's filtering and sportier capabilities. Despite its size the big maxiscooter is a dexterous beast. Weighing almost as much as an Africa Twin is worthy of note, but it's centre of gravity is low and the wheelbase is well suited for nimble manoeuvring through the traffic. Yet it's stable, smooth and comfortable when on a mission to get someplace quickly. 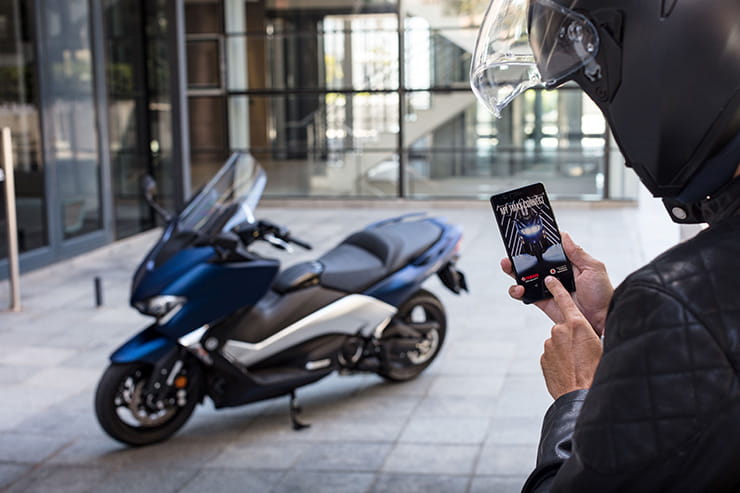 All the technology packed into the new bike is easy to operate even with the multiple buttons across the handlebars. The electronically operated screen flies up and down quickly through its 135mm range and is highly effective. Cruise control is as easy as an on/off button then set with a rocker switc, a familiar system to other Yamaha models.

As with all scooters, the left-hand lever operates the rear brake. On the Yamaha, it's also linked to the front and helps settle the bike under braking for the faster turns. The ABS cuts in too early for my liking but from a safety perspective, that prevents hooliganism! Parked on an incline? No problem, the ungainly-looking handbrake is just a quick flick away from keeping the bike still.

Of the two riding modes, T is for touring and makes the throttle delivery softer. For the more relaxed ride, it's be ideal. I prefer 'S' for sporty which isn't that aggressive and one of the key points to the development of this model in my opinion. The throttle reaction, however fast you can open or close it, remains unsnatchy and is one of the keys to how well the TMAX performs. The bike is well settled and not lurchy on its suspension when either closing the throttle or on the front brake. Cruising along at 60mph the revs sit at 4,000rpm but crack the throttle open for an overtake and there's plenty of drive.

The centre of gravity helps with the deftness of its handling and that’s down to the low and forward mounting of the engine in the chassis. The rather imposing size and wide stance required might alienate the shorter rider

The white elephant in the room is still the £10k+ price but it's becoming easier to justify with its all-around ability, the tech stuffed into it and the enjoyment it gives. 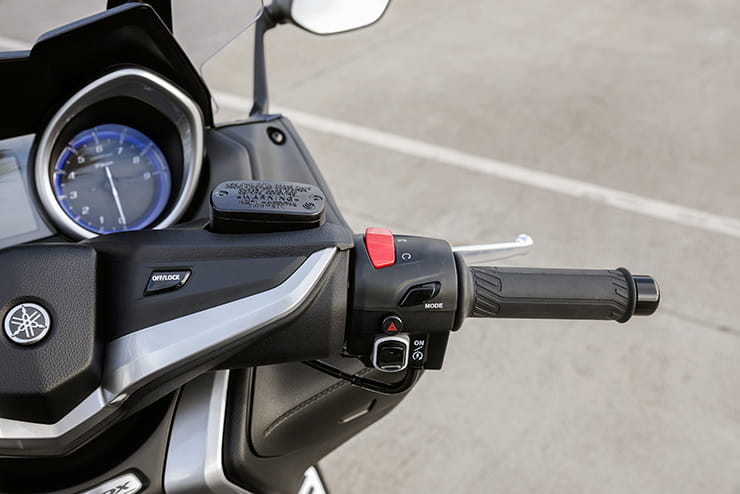 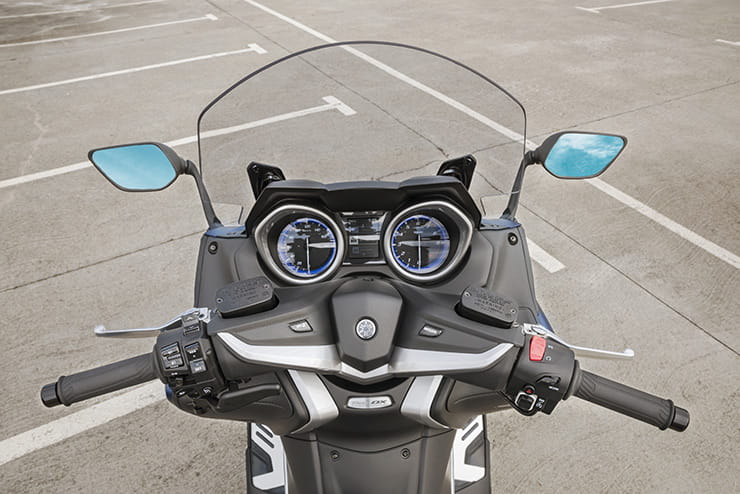 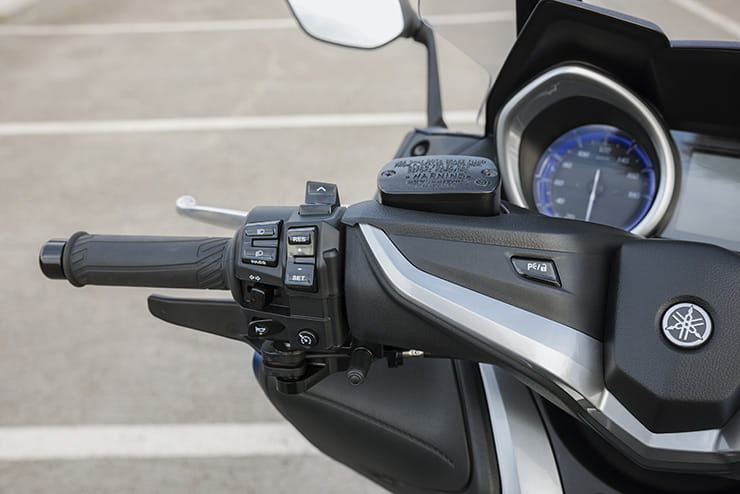 Designed to mix the performance of a bike but with a splash of comfort, the Yamaha has several seating options depending on how relaxed your ride is – feet forward along the footboards does put a little pressure on the coccyx while flat feet tucked right back accentuates a sportier riding position. Top speed on the launch was indicated at 170kph though the MyTMAXConnect app (more of which later) displayed 158kph – having the screen in the lowest position assisted with the aerodynamics.

The Dunlop Sportmax Roadsmart III tyres held well while all 45bhp that the parallel twin-cylinder, four-stroke, 530cc motor could provide was used. Despite the often frenetic pace of a press launch, the TMAX managed 57.6mpg.

Practicality resonates from around the scooter and every orifice. Under-seat storage plenty big enough for a full-face helmet and my Givi rucksack while one of the two glove compartments contains a 12v charger. The twin clocks that show revs and mph sandwich the monochrome TFT digital display that contains a fuel gauge, temperature gauge, screen adjustment, mode, trip and all the usual information.

The new keyless system operates the ignition plus open/closes the storage box while the centre stand can be locked by activating a handlebar mounted button. 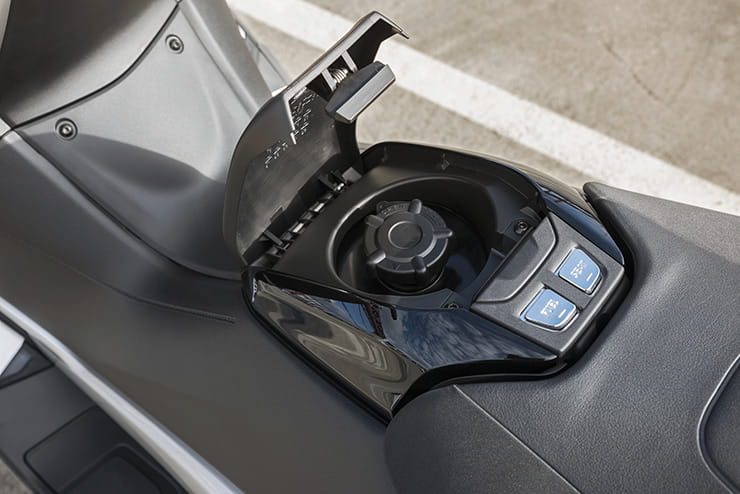 From top boxes to a back rest and an Akrapovic exhaust to a sports screen and seat, the TMAX plenty of Yamaha approved options available ready to pimp and personalise.

A dedicated mobile app by Vodafone called ‘MyTMAXConnect includes the ability to remotely access the scooter and keep it more secure with its own tracker. An alert sounds if the bike is moved without the key present and operating centres across 44 countries monitor 24/7. Journey data, maps, distance, GPS, speed can be recorded and even a maximum speed limit can be set.

Sitting perched on top of the bike high above the rider has pros and cons. You can see a lot more with an improved field of vision not blocked by the back of the rider’s helmet yet the wind can affect you more and the balance of the bike at speed. The big, wide seat is comfortable and the long grab handles offer variety for pillions of all shapes and sizes. It’s easy to hop on and off and the non-slip foot pegs are big enough. 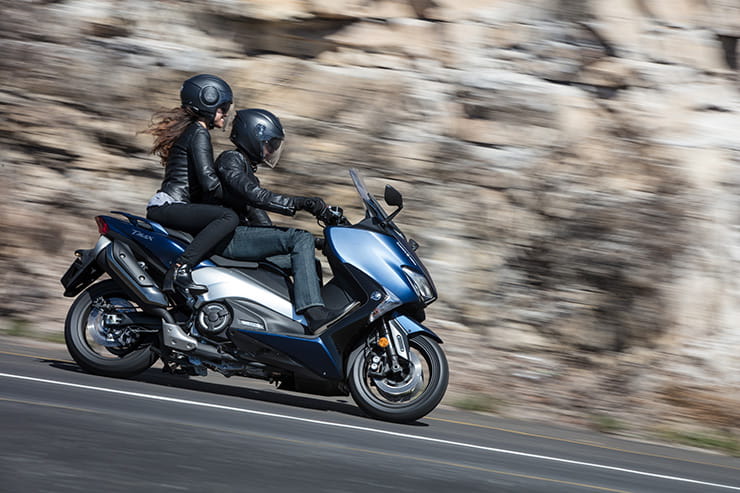 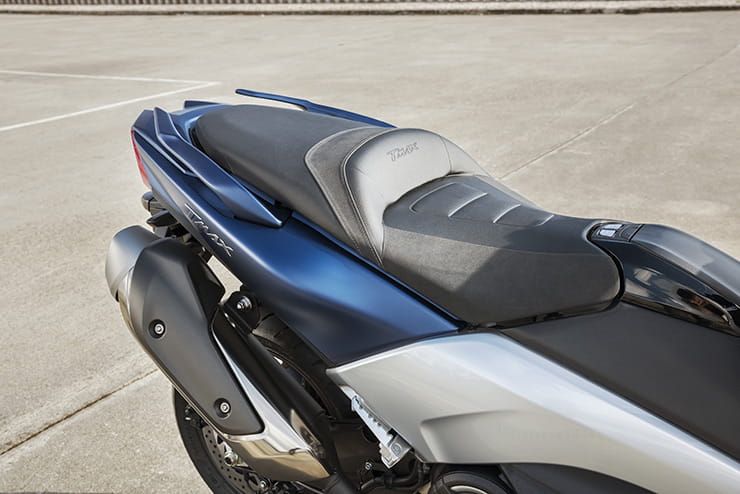 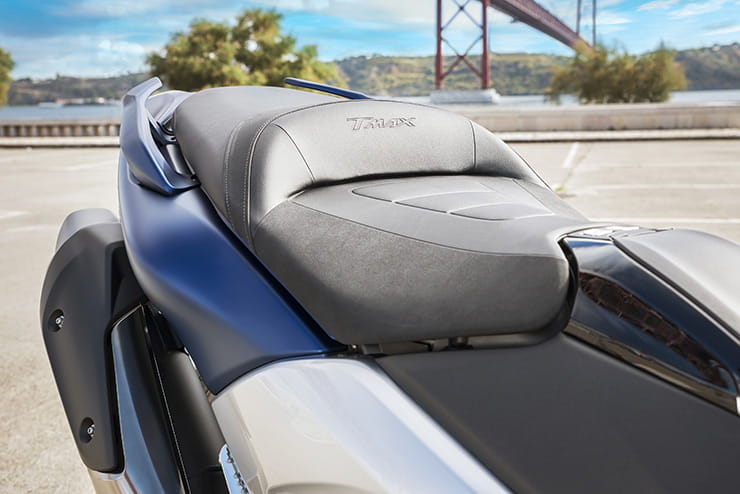 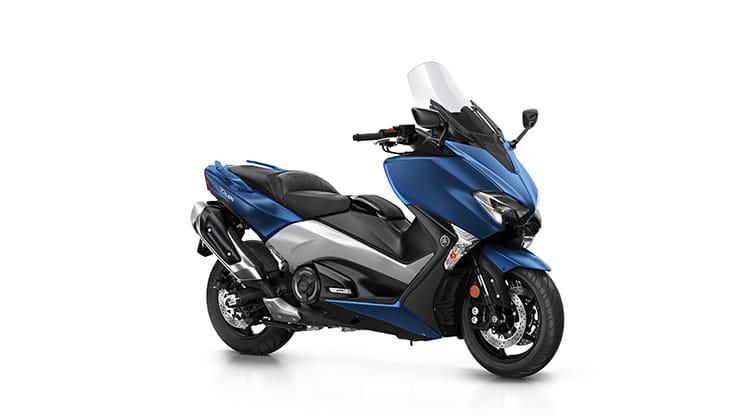 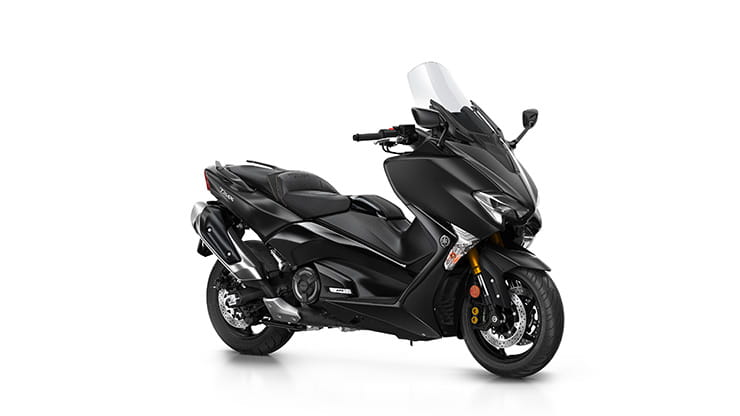 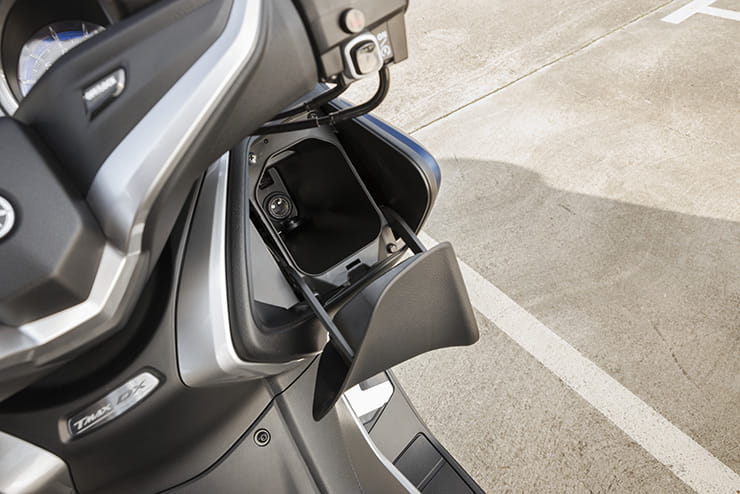