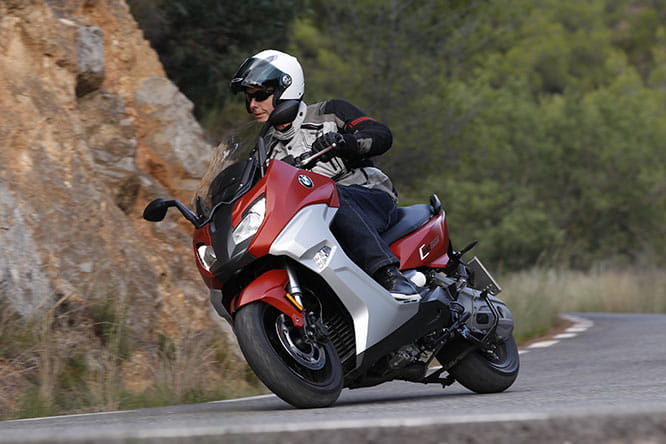 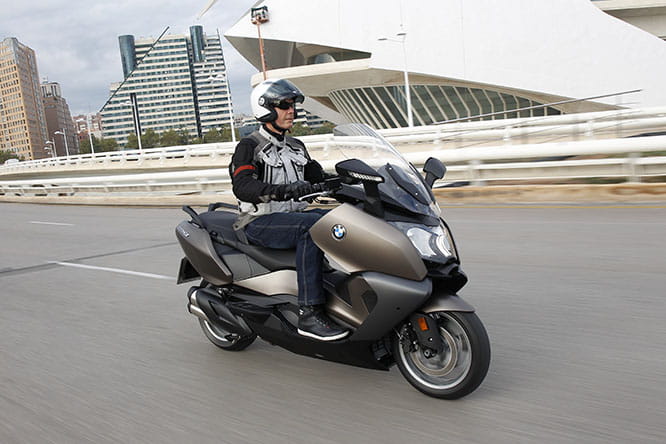 These days BMW can claim to be an established scooter manufacturer, even if the firm’s entry to the world of small-wheeled commuters hasn’t approached the spectacular impact of its arrival in the super-sports market with the S1000RR. The German marque has sold 27,000 units of its parallel twin C-scooters since their launch three years ago: respectable by maxi-scoot standards, albeit without challenging the likes of Yamaha’s hugely popular T-Max.

That sales performance has been sufficient to encourage a revamp for 2016. The basics of 647cc liquid-cooled engine and tubular steel-framed chassis are retained, but both scooters get updated CVT transmission, traction control and new exhausts, plus revised bodywork, instruments and suspension. The C600 Sport also gets a new name, “C650 Sport” finally recognising that it shared the same engine all along. And the more touring oriented C650GT gains an optional Side View Assist system comprising warning lights, built into the mirror stalks, to warn that there’s something in the scooter’s blind spot.

Of the two it’s the Sport that is most visually different. Almost all of its bodywork is changed in an attempt to give a slightly racier look, though the essential design with its three-way manually adjustable wind-screen is retained. So too is the broad dual-seat that hinges up to reveal copious storage space, boosted by the innovative flexcase that extends towards the rear wheel, allowing a second full-face helmet to be securely stored when the scooter is parked.

At 249kg wet the Sport is no lightweight even by maxi-scooter standards. But its cleverly redesigned centre-stand was surprisingly effortless to use (as before the side-stand acts as an automatic parking brake), and the Sport was also respectably easy to manoeuvre at slow speed, its engine’s angled-forward cylinders contributing to a usefully low centre of gravity. 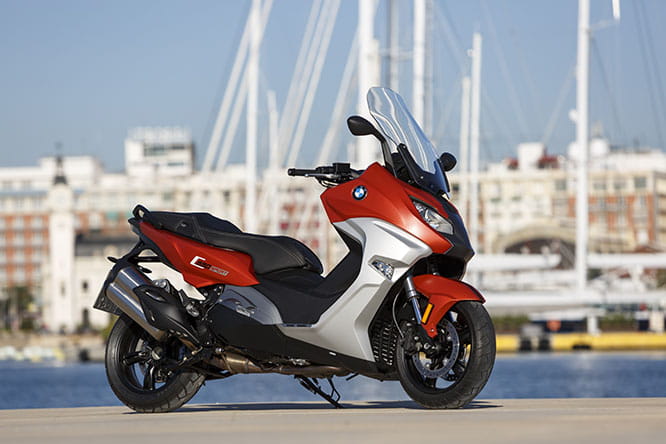 Flicking through traffic at the start of the launch ride in Valencia was effortless, the BMW feeling very well balanced, and its revised injection and CVT transmission systems working sufficiently sweetly to keep the scooter well balanced. Ride quality in town was good too. The upside-down forks and monoshock have ten per cent lighter springs, which along with revised damping allowed the Sport to float over minor bumps while keeping a well controlled feel.

With an unchanged maximum output of 60bhp at 7500rpm the C-scooters are powerful even by maxi-scooter standards, and BMW say the revised CVT system (whose mods include lighter springs) gives slightly improved acceleration plus a few extra mph on top speed. The Sport certainly left most Valencian traffic in its wake with minimal effort, and when we reached a main road cruised at an indicated 80mph feeling effortlessly smooth and unstressed, rumbling up to an indicated 100mph on one short straight before I had to slow with about 10mph more to come.

High-speed stability was flawless and handling very adequate, combining reasonably light steering with good suspension control despite the softer springs. On twisty roads north of Valencia the Sport could be flicked around at a decent pace. Its Pirelli Diablo Scooter tyres gave plenty of grip, now backed up by BMW’s ATC traction control system. And the triple-disc brake system, with twin-pot front calipers, meant respectably good stopping power too, in conjunction with unchanged Bosch ABS.

On straighter roads I was less impressed to find that, unsurprisingly, wind protection was no better than I recall from the original C600. There’s nothing wrong with the screen’s simple but effective three-way adjustment system, which requires two knobs to be loosened, and can be done in a couple of minutes. But as before even the highest setting was too low for me and other taller-than-average riders, generating a loud wind roar that made main-road cruising unnecessarily tiring. Shorter riders would doubtless be more impressed but it’s a shame the screen hasn’t been improved. 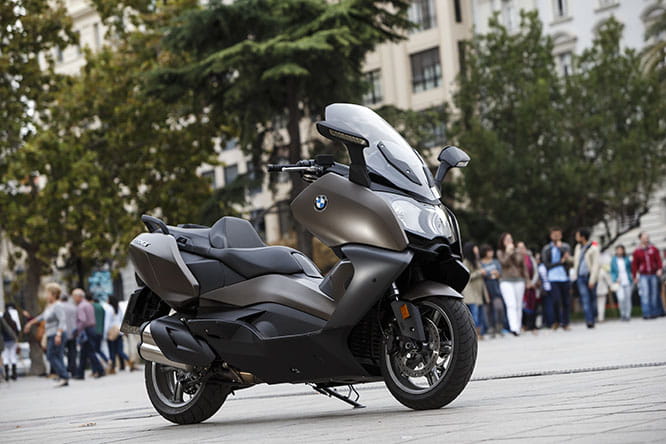 Comfort in other respects was reasonable, although the generously long and broad dual-seat eventually generated a bit of lower back pain, possibly due to my tendency to crouch down to escape the wind. At least there are generous footboards for the pilot, and if a pillion gets only footpegs the rear seat does incorporate generously large and sturdy grab-handles.

And there are plenty of other practical touches, including the new instrument panel, which combines an analogue speedo with a digital panel (showing fuel consumption etc) that can be toggled from the handlebar. The unchanged 15.5-litre tank, shared by both models, would typically be good for over 160 miles at the launch average of 55mpg. If the C650 Sport can’t quite match the light weight and cornering poise of Yamaha’s T-Max, its ultra-popular target as a sporty maxi-scooter, it’s more powerful and arguably more practical as well as more expensive.

But if you’re looking for comfort and practicality from a maxi-scooter it’s the more luxurious C650GT that’s the better of BMW’s duo. The GT hasn’t had such a big visual makeover as the Sport, merely getting a reshaped rear end including the tail light. But it’s a smart looking machine and, like the other model, adds to that impression with new handlebar trim and instrument console.

The GT is 12kg heavier at 261kg wet but still managed to feel reasonably manoeuvrable, even in traffic where its broad and slightly taller (at 805mm) seat had shorter riders straining slightly to get both feet on the ground. It’s a brilliantly comfortable place to sit, though, helped in the rider’s case by the substantial lumbar pad that gave useful support. The upmarket Highline version of both models also gets a heated seat with individual controls for rider and pillion, who in the GT’s case is treated to footboards as well as grab-handles.

Wind protection is also notably better than the Sport’s, thanks to a screen that is taller and wider as well as electronically adjustable. As before the range of adjustment isn’t that great, and being very tall I’d still have liked to raise it slightly more. But protection was generally good, and the ride was pretty quiet at the steady 80mph-plus cruise that the GT was effortlessly capable of holding.

The GT is a practical machine, too, with room under its seat for a full-face and an open-face helmet, though strangely BMW still haven’t given the GT the benefit of the Sport’s clever space-adding flexcase. It does however get larger and very clear mirrors, and also comes with the innovative option of Side View Assist: basically a blind-spot warning that alerts the rider by flashing small lights on the mirror stalks when a vehicle is in the crucial hard-to-spot area.

This isn’t something I’ve ever thought I needed on a bike or scooter – it’s easy enough to turn your head, after all – so I was surprised to find the SVA system useful, especially in Valencia’s multi-lane traffic when the occasional flashing light signalled a car or scooter that I wasn’t aware of. The system would be even more valuable on a bike with less effective mirrors than the GT.

As it is I’d be tempted to pay the extra £360 for SVA, even though the Highline version of the GT is already far from cheap, at £10,390 (the basic model is £9900). The Sport costs slightly less, at £9600 for the base model and £10,375 for the Highline, which incorporates daytime riding lights, tyre pressure monitor and LED indicators as well as the heated grips and seat. Despite that I’d rate the C650GT as the better buy, at least for anyone contemplating reasonable distances. Its price is high but buys a scooter that would make a good job of commuting, touring or pretty much anything in between. 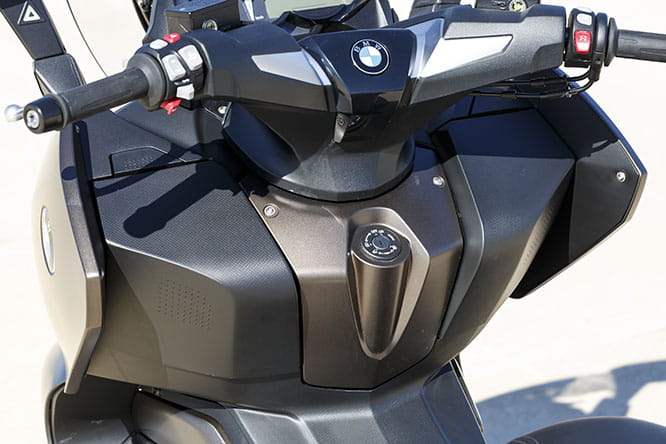 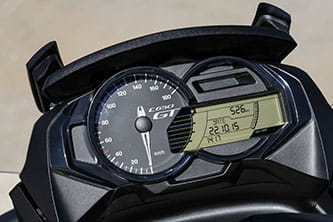 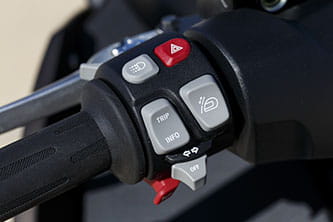 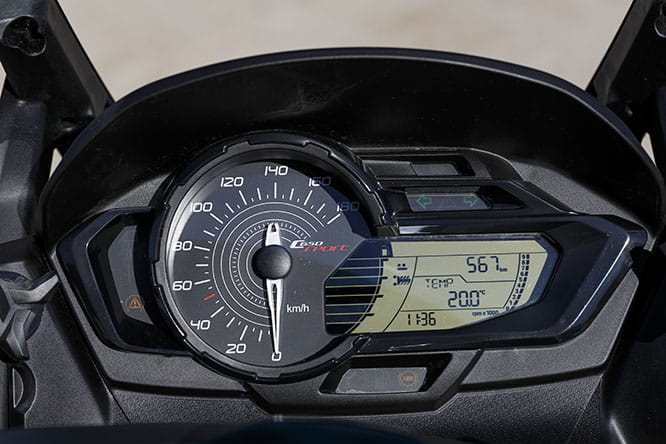 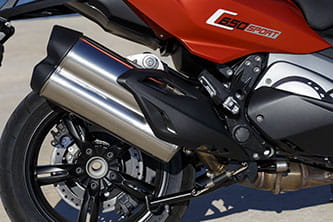 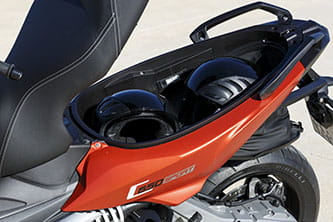 Revamped pair of upmarket maxi-scooters with pace, comfort and features to match their premium prices.