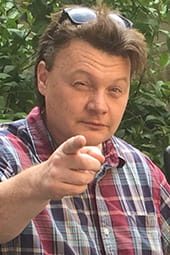 By Alan Dowds
Alan Dowds has been writing about bikes for more than twenty years, serving his time at MCN, RiDE and SuperBike magazines. He went freelance in 2010 to spend more time looking after ‘the weans’, and now splits his spare moments between shouting at said offspring, battling the various automotive projects he has on the go, and working on his crap wheelies. Loves Burgman 650s and turbochargers. Hates hoovering. 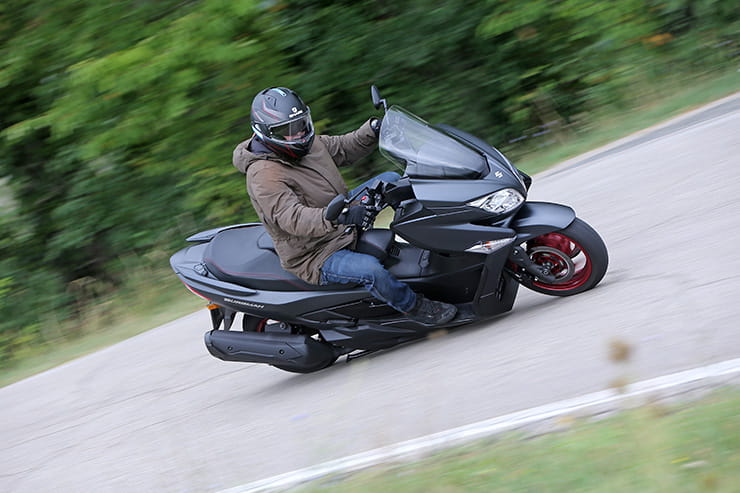 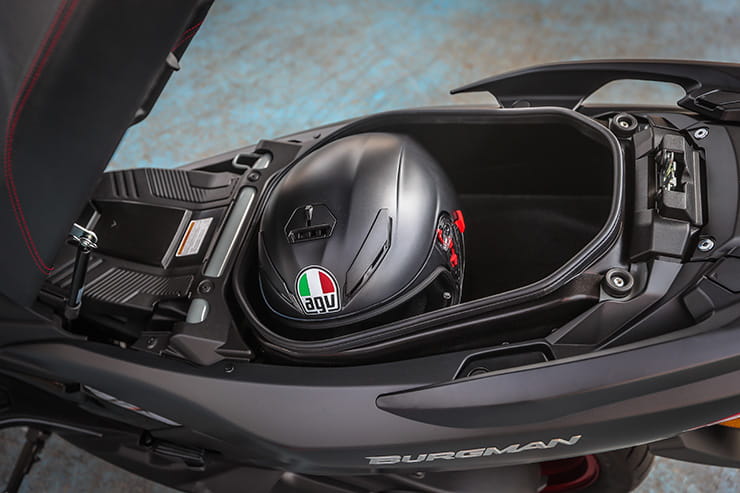 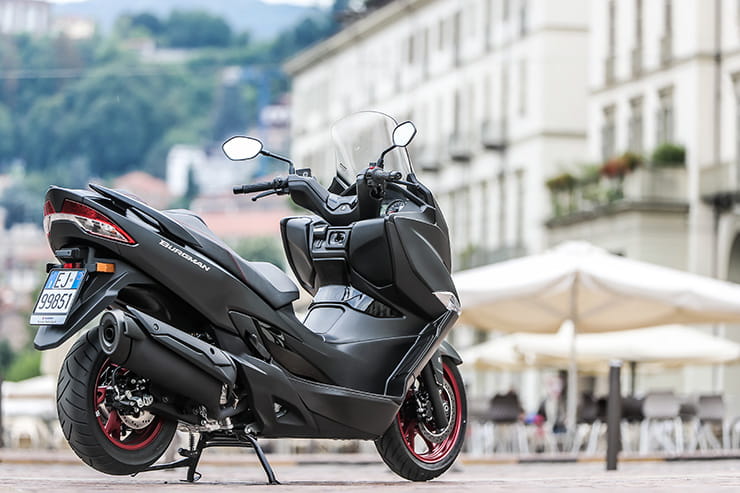 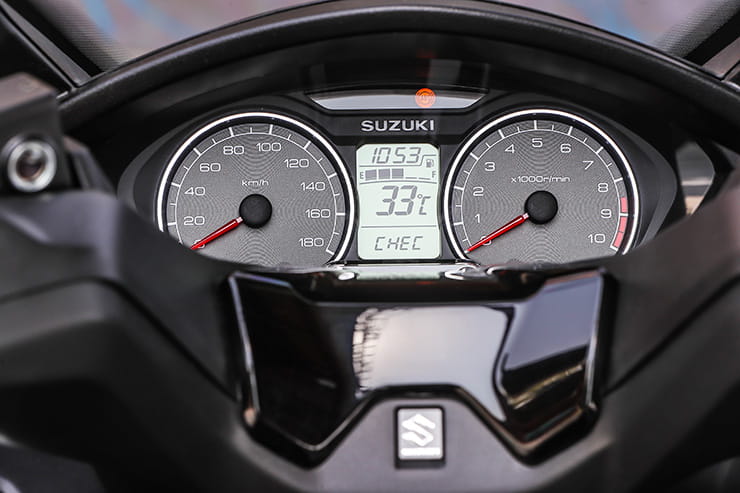 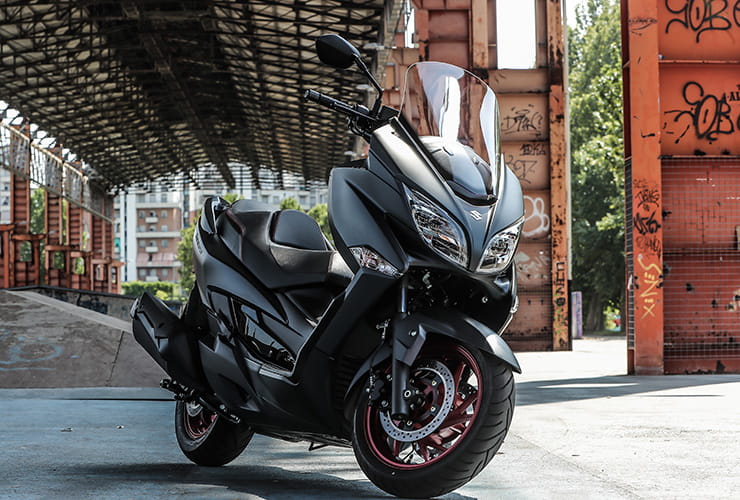 Turin’s famous for a few things – the shroud that lunatics claim bears the image of ‘Jesus’, the FIAT factory with the test track on the roof, and Michael Caine blatting round it in a Mini in The Italian Job.

But it’s also the home of Suzuki Italia. And that’s why we’re here today – for a spin on the firm’s new 2017 Burgman 400. Suzuki reckons it invented the big scooter back in 1998, when the original Burgman 400 appeared. And indeed, up to that point, the biggest step-thru bike you could get was a 250 four-stroke single. The likes of Yamaha’s Majesty and Honda’s Foresight were a bit quicker than the 150 and 200s of course, but they still lacked the legs for a middle-distance commute, and you’d need to be a masochist to consider even a gentle tour on them. But with the extra 150cc of grunt, the 400 Burgman was a serious tool, and it immediately took off among mainland European commuters looking for a quicker way to get into town from the suburbs or surrounding villages. While keeping their suit and shoes nice and clean.

Since then, the top end of the sector has grown, with the 500-650cc class of Yamaha T-MAX, Honda Silver Wing and Suzuki Burgman 650 all offering near-middleweight roadster levels of performance, combined with the practicality and comfort of a scooter. But the Burgman 400 has remained attractive – even more so after an update in 2006 gave more power and equipment. 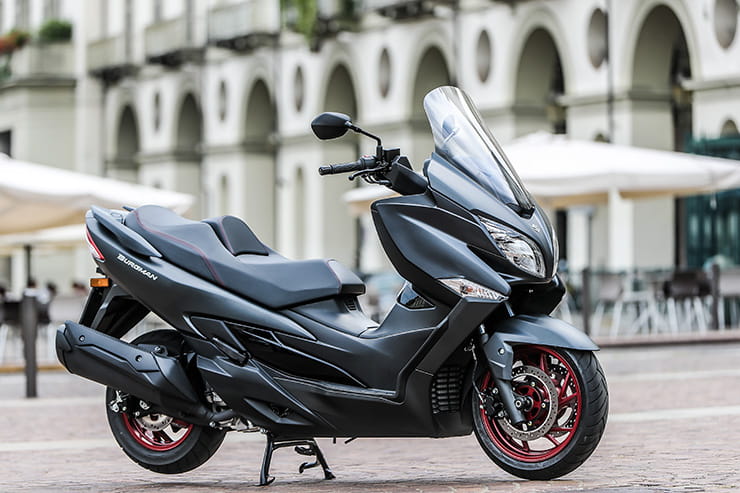 For 2017, Suzuki’s had a bit of a rethink, and tried to direct the 400 into a new path. The PR folks have come up with the term ‘Elegant Athlete’, which is a bit pony, but you get the idea. Pump up the style, drop a bit of weight, and steer the 400 away from the luxo-barge scooter class and further towards a slightly more dynamic, sleeker tool. Yamaha’s currently doing much the same thing with its X-MAX 300 and 400 models, meaning there’s probably some proper market research gone on here. 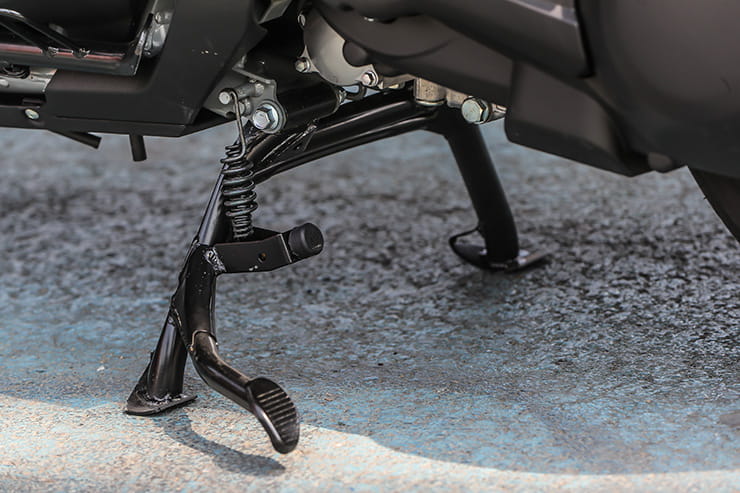 So, the new bike gets slimmer, neater bodywork, and a seven kilo weight loss, aimed at improving agility. The front wheel goes from a 14-incher to a 15-inch rim, which improves stability and feel from the front end. The frame is lighter and stiffer, again to sharpen up the handling, and while the rear suspension is the same setup, it’s got revised settings. It’s one of the B-man 400’s best features actually: the underslung monoshock has a proper rising-rate linkage, a step up from the normal twin-shock setup on almost all scooters. 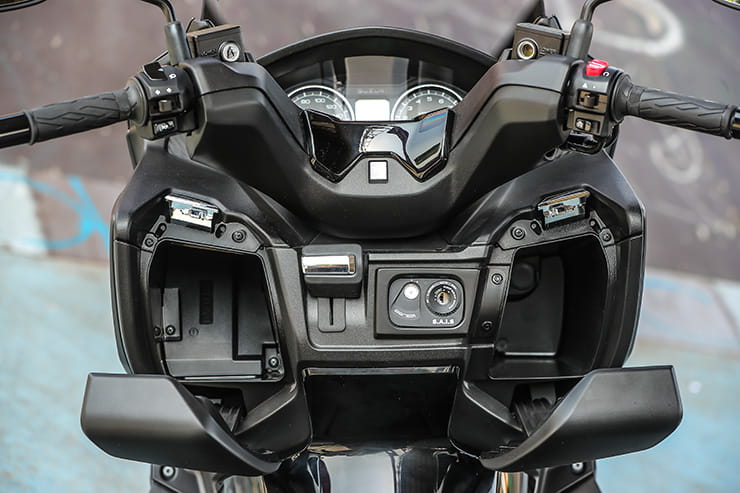 Away from the chassis, the engine has also been overhauled. Now, some of that is emissions shenanigans, to get the 400 through Euro-4 testing. But Suzuki reckon they took the chance to beef up the Burgman’s bottom end, giving a healthy dose of extra grunt at low revs, with the downside of a slightly abbreviated peak power figure. The modernisation continues elsewhere too, with an all-new cockpit that’s clear and communicative, and revised storage spaces, including the all-important 12v charging socket in the front glovebox.

So, a gruntier engine, tauter chassis, less mass to shove around, and a sleek new look – sounds pretty good, eh? And I’m keen to get onto the roads around Turin to check it all out… 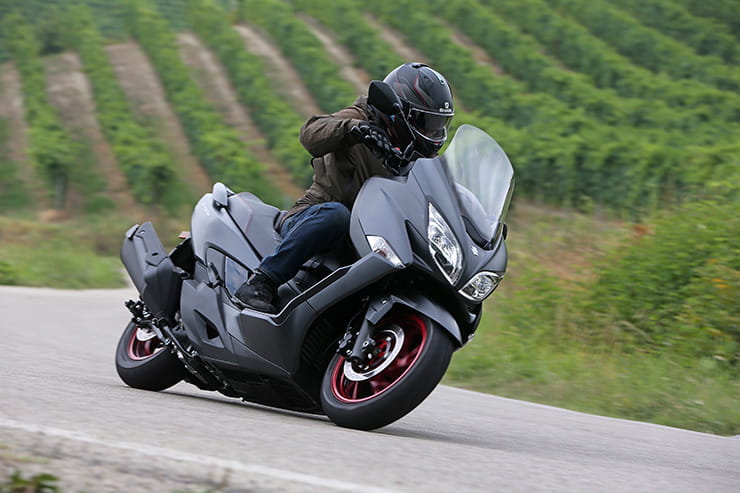 We kick off in town, and spend 45 minutes or so taking in the sights around the city centre. Turin’s a lovely spot, and we’re here just at the start of the Italian summer hols, so the place is pretty quiet too. That lets me concentrate on the bike, and the first impressions are good. The new seat is comfy and well-padded, and that revised dash is easy to read. On the move, the new motor tune definitely feels much fatter (phatter?) away from a standstill, with a hefty shove of torque firing you ahead of the traffic with ease. The handling is impressive too – the front end in particular inspires confidence in a way you don’t often get on a scoot. Too often you’re left wondering what might be going on at the tyre, but there’s plenty of feel through the bars here. 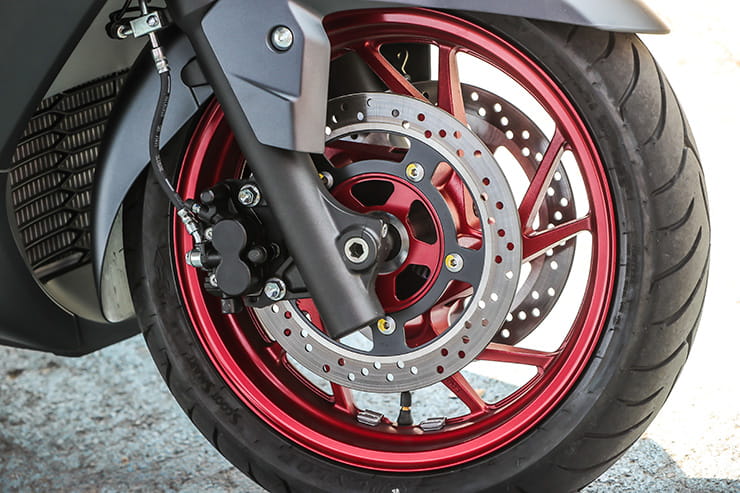 The brakes are strong, especially the back, and the Dunlop tyres give decent grip. Their hold on the road isn’t faultless though – on the more polished cobbled sections, the back end sometimes moves out a little on the gas. It’s bone-dry today as well, and I’m wondering what it would be like in the rain. Yamaha made much of its traction control system on the X-MAX 300 I rode earlier this year, and I’m wondering if Suzuki should maybe have tried to apply even a basic traction control setup here. It would surely appeal to less experienced riders who’re always looking for more safety aids, whether they’re likely to need them or not…

We’re heading out of town now, for a lunch stop up in the hills surrounding Turin. I’m following the Suzuki guide on a V-Strom 650, and (of course) trying to beat him down every straight. It’s a Sisyphean task though: I can get close on the way into every bend, but he pulls away on the way out every time, the bugger.

He’s got twice the power and maybe a little less weight of course, so it’s no contest really, but it’s encouraging that the Burgman can stick so close. The front end continues to impress, especially on tight downhill bends, where you have the confidence to push pretty hard.

Uphill bends are another matter though: the little 400 was never over-endowed with top end shove, and the lopping off of a couple of bhp hasn’t helped. That strong bottom end and Euro-4 compliance has been paid for with a slightly wheezy feel up top, which shows on the open road. Overtaking cars at even 60mph takes planning, and if you were looking to boss the M1 for a few junctions every morning, I’d definitely be wanting to plump for the 650 Burgman instead. 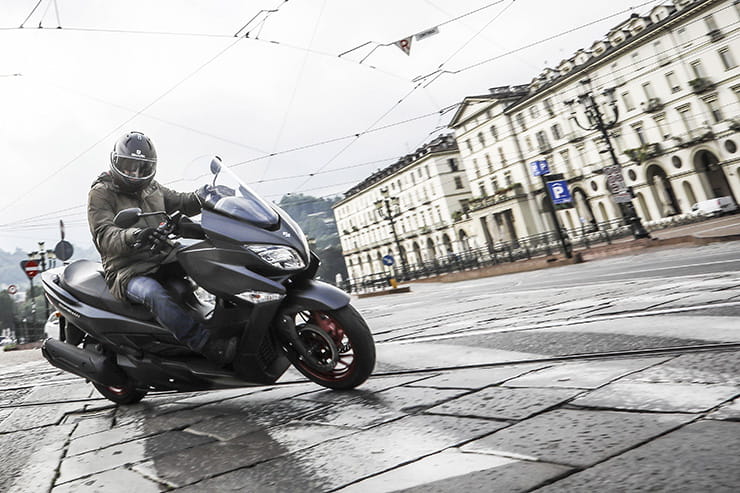 After lunch, we blatt back into town, and the Burgman 4 is back in its element. Another little trade-off appears though – the suspension that was really controlled and sporty out of town is a little firm over some of the more bumpy cobbled streets. It’s extreme of course – the ancient roads in Turin’s old town are in a terrible state in places (I genuinely hurt my back sitting in the minibus on the way to the airport the next morning over one big pothole). But the rear end is definitely on the firm side of comfort. The preload is seven-way adjustable though (under a small maintenance cover) so you do have some leeway for setup there.

I should have said at the start that I’ve actually bought a 650 Burgman with my own cash, so I’m sold on the concept in terms of practicality and usability. The 400 has all of that, in a less powerful package, and if you want a big-bore scoot to rule in town, it’s definitely worth a look. A trip from Shawlands to Merchant City in Glasgow, or Clapham to Shoreditch in London would be perfect on the 400. If you need to spend more time out of town, on motorways or fast A-roads though, I’d definitely consider stretching to the 650.

Back at the hotel, and I’m impressed – both with Turin, and with the new medium Burgman. It might have the top end of an old Fiat, but as the original big scooter, it’s got more heritage than the (fake!) Turin Shroud, and it’s as nippy round town as the Italian Job Minis….