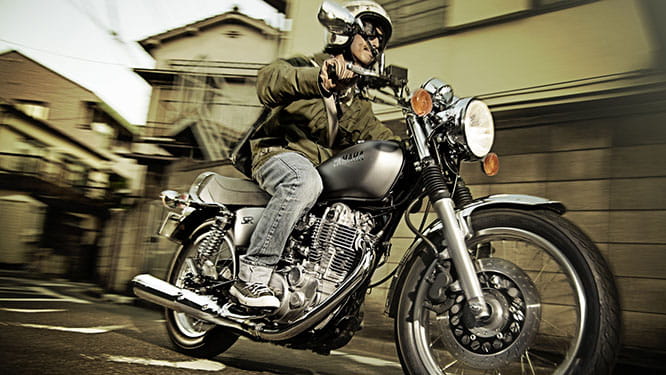 It’s a ‘time capsule’ from the ‘70s, a genuine old school classic (specifically the slightly bigger SR500) that’s returned to production for the modern, retro-obsessed market. Unfortunately it’s also only a 23bhp single…

Odd one, this. The SR400 is no retro, no reproduction, no rehash. Instead it’s the real thing: namely a genuine 1970s model that, bar just one or two modifications, is back in production today as a brand new classic.

Yamaha’s original SR500, a single cylinder four-stroke roadster, built around the successful XT500 trailie’s motor, was a big hit in the mid to late ‘70s and retains a strong following today as modern classic; partly due to its old school ‘big single’ appeal, partly due its simple mechanical and affordability.

In Japan, however, it never really went away. Although deleted from Yamaha UK’s line-up in the mid-‘80s the SR remained on sale in Japan (in 400cc form, which in Japan is a licence classification limit) virtually continuously to this day. Now, with Yamaha pushing its ‘Sports Heritage’ line and ‘70s-style roadsters and cafe racers being hugely fashionable, the Japanese giant has decided to bring it back to the UK.

It’s not ‘quite’ the same as the original, of course. Now 399cc it puts out just 23bhp (the 500 had 32), the seat’s a little more modern and bewilderingly it has a contemporary grey satin paintscheme (although a more period-appropriate black/gold alternative is also available). Everything else, however, is completely timewarp: from the old fashioned metal switchgear to the wire wheels, chromed steel mudguards and fuel tap.

It goes just like the original, too – which can be good or bad depending how you look at it. It’s kick-start only, decidedly ‘dinky’ (particularly for those over 5’10” and, away from the commuter city snarl, it’s measly 23bhp struggles like a 125. Yes, it’s cute, a doddle to ride and authentic but it’s a little expensive for what it is and it’s a shame they couldn’t have revived the 500 version – especially in larger, XT500 trail bike guise. 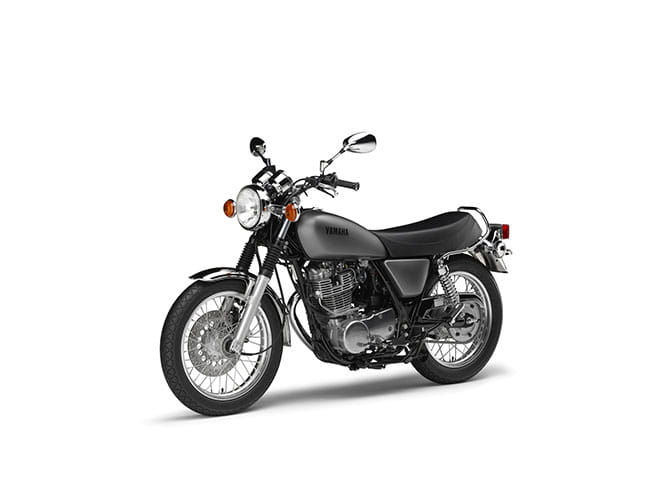 The revived Yamaha SR is so new, so unlikely to rack up high mileages, so understressed and the original’s so proven that nothing mechanical has yet arisen or, to be honest, is likely to. What’s more, even if something does go wrong (and it’s hard to imagine what), without any modern sophistication or complication (there are no electronics for example) it should be an easy fix. On the other hand, as a large part of the SR’s appeal is cosmetic and in its authenticity it’s important that any used example has been looked after and is in good, original condition, so be sure to check all the usual suspects for crash damage (bar ends and levers, tank etc), poor maintenance (badly-adjusted or non-lubricated chain, worn brake pads and tyres) or non-original parts. Also check for owner neglect or damage which also has a bearing on price, for example, scratches on the tank.

Nothing yet, not since the 2014 reintroduction at any rate and, come to think of it, not many since the original was launched in SR500 form way back in 1975. With SR, more than any other machine we can think of, time has, quite literally, stood still.

Last time we checked new list price was £5199 which seems a little steep for a 23bhp relic when, for example, you can get Yamaha’s own stupendous MT-07 for the same money. That said, there’s nothing else quite like the little SR. On the plus side, it’s definitely worth shopping around. We’ve seen new ones for £4995 and low milers for £4500.