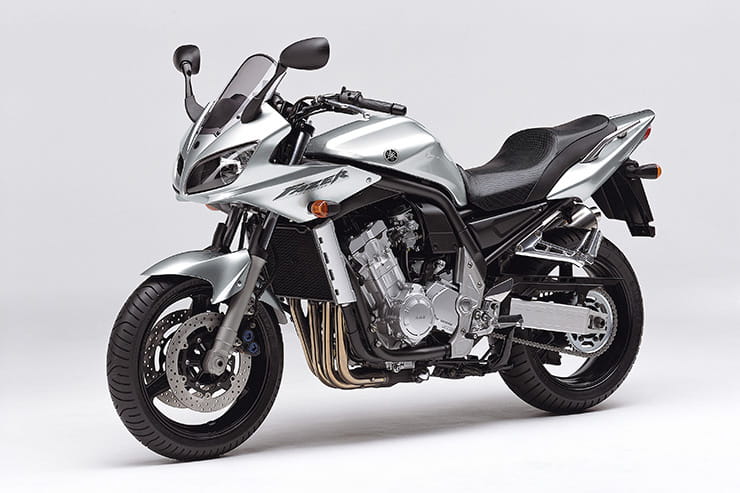 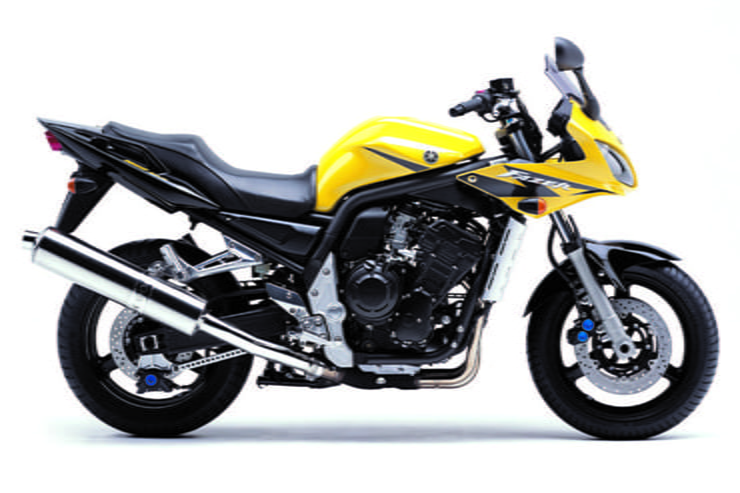 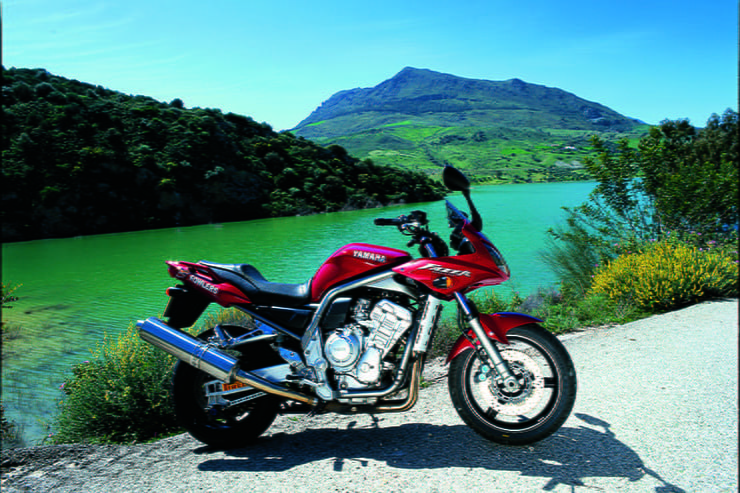 Big, comfortable and packing a superb motor with stacks of grunt, there is an awful lot to like about Yamaha’s original large capacity Fazer model. In fact, if you are after a no-frills commuter the Fazer 1000 is certainly worth considering. If only we had been so generous about it when it was first launched way back in 2001…

Initially blighted by the fact that everyone was expecting a hairy-chested naked R1 (this arrived with the FZ1 and, ironically, most riders hated it!), what Yamaha actually delivered in the FZS Fazer was a large capacity naked with a relaxed out look on life. In short, it was basically a bigger version of the firm’s excellent middleweight, the FZS600 Fazer ­– just with bigger balls!

Although only on sale for a relatively short period of the time, it is remarkable just how many FZS models are in the used market, a hint at the model’s robustness. This is a bike that will just run and run and do so with bags of charm as well as huge dollops of practicality and fun.

Lovely and roomy to ride with a deeply padded seat, the FZS’s suspension is a touch on the soft side for sporty cornering (which was the main focus of its initial criticism), but for riding on the UK’s bumpy and often potholed roads it is actually fairly good. Add to this the strong grunt delivered by the re-tuned R1 motor, decent practicality levels for both a rider and pillion, a 200-mile tank range with 50mpg achievable and a fairly bullet-proof reliability record and for a bike that can be found for under £2,000 the FZS1000 Fazer is an absolute winner. 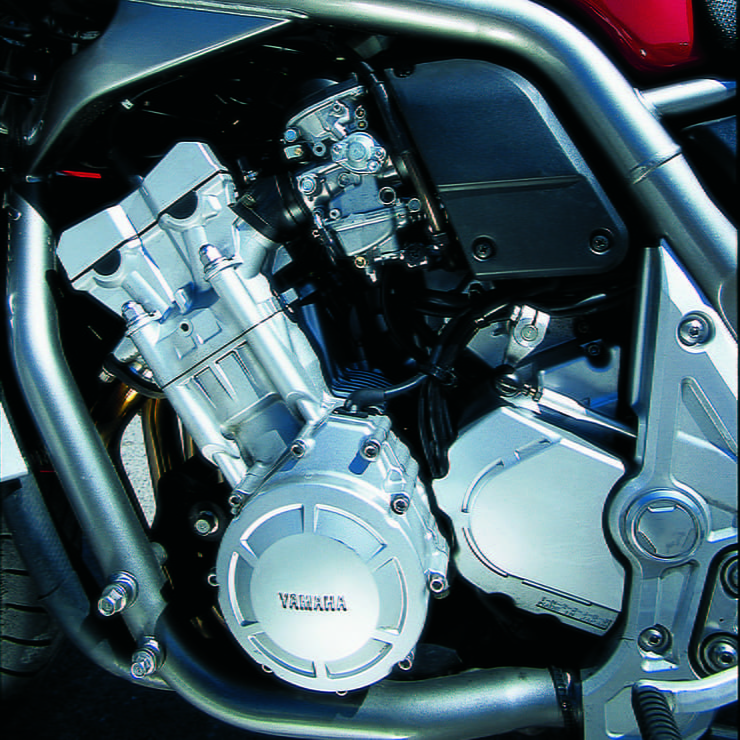 With it nearing its 20th Birthday, and most machines living their lives either as commuters or tourers, when buying a used FZS1000 Fazer you need to be careful when it comes to the consumable items or just the items that wear out over time. But first a few of the basics…

As with all Yamaha models of a certain vintage, be wary of the dreaded EXUP valve. Find its location in the exhaust pipe and check that it is moving freely by watching the cables that lead into it. If possible remove its outer cover, however there is a fair chance the bolts holding it on will have rounded off by now, so this can be a nightmare. If the valve is seized (many are and there may be an Fi light or warning code showing on the rev counter to confirm this) they are a nightmare to free off, meaning removing it all together through a link pipe is often the best option. The R1-derived motor needs its valve clearances checked every 24,000-miles, which has probably been skipped, and the suspension linkages should be stripped and regreased every four years at an absolute minimum or they will seize up.

When it comes to the suspension, give the forks a bounce and check for any leaks past the seals and inspect the shock very well. It will probably (almost certainly!) be showing a lot of signs of rust, but ensure the adjuster on the base of the shock is moving freely as these love to seize. A replacement shock is about £350 for a reasonable aftermarket unit while a fork refresh is in the region of £150. And while you are in this area, see how much life is left in the chain and sprockets and also the tyres. Now onto the Fazer specific issues…

While the R1 motor is generally solid, second gear is a touch weak so check for any signs of it hopping out while on a test ride and also be wary of the Throttle Position Sensor (TPS) failing. This is about £160 from Yamaha (£90 pattern) to replace and is a bit tricky to set-up, so requires a competent mechanic. If the TPS has failed the rev counter will be flicking up and down to display a warning code, which is obvious on a test ride. The carbs may well need a rebuild on a high mileage machine as the seals can start to perish (especially if left unused for a while), but a carb rebuild kit is less than £100 and isn’t too tricky a job for a home mechanic as they are fairly accessible on the FZS. Finally there is the finish, which does see the paint flaking off the engine and wheels, but this is easy to spot unless the bike has an aftermarket belly pan or fairing fitted, in which case get the torch out and look behind it.

Common suspension modifications include pulling the forks through the yokes by a few mm which quickens up the steering. Some people also fit the rear shock from a let-model YZF-R6, which has sportier damping and more adjustability. There’s plenty of advice on the links to the forum and club below.

Don’t be alarmed if the engine cooling fan comes on shortly after starting it. Yamaha designed it to do this because the fan housing is close to the exhaust headers. The fan should go off when you put the bike in gear and start riding.

Cracks in the manifold rubbers between the airbox and carbs are common. In almost all cases it is cosmetic and doesn’t go all the way through or affect the performance.

Slightly higher than standard Renthal handlebars are another common modification. Apparently the standard ones can damage the tank badly even in a low-speed tumble. The taller ones don’t do this. 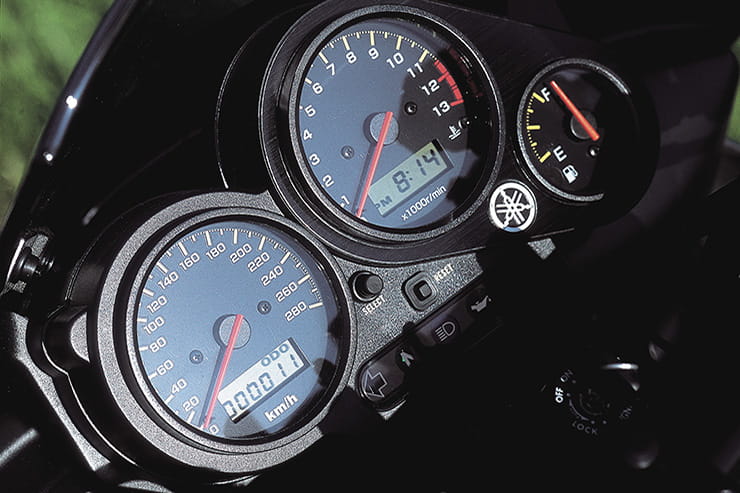 The FZS1000 Fazer was launched in 2001 and discontinued just four years later at the end of 2005 when it was replaced by the (fairly maligned) FZ1 Fazer model. As such it didn’t receive any major overhauls, however a black-engined S version arrived in 2003 alongside updated clocks and in 2005 a black frame signified the addition of a revised catalytic converted to allow it to pass stricter emissions regulations. The 2006 FZ1 Fazer is a totally new animal that uses a different generation of R1 motor, cast aluminium chassis and fuel injection alongside inverted forks and numerous other differences. It’s not as relaxed as the FZS, but it is a better handling and more modern machine. 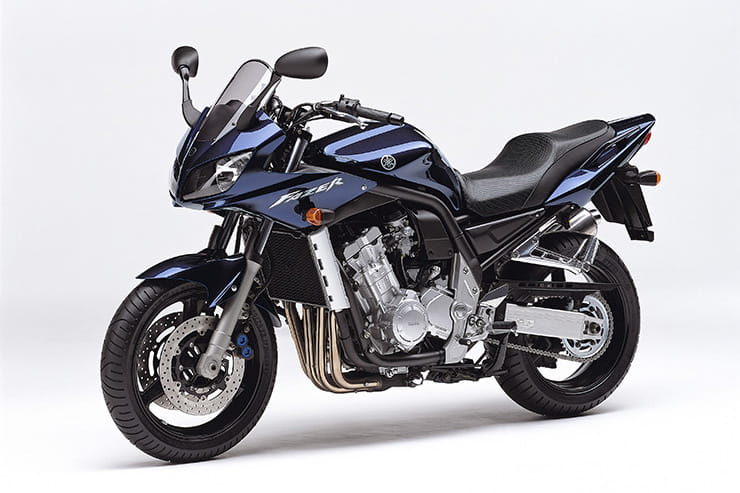 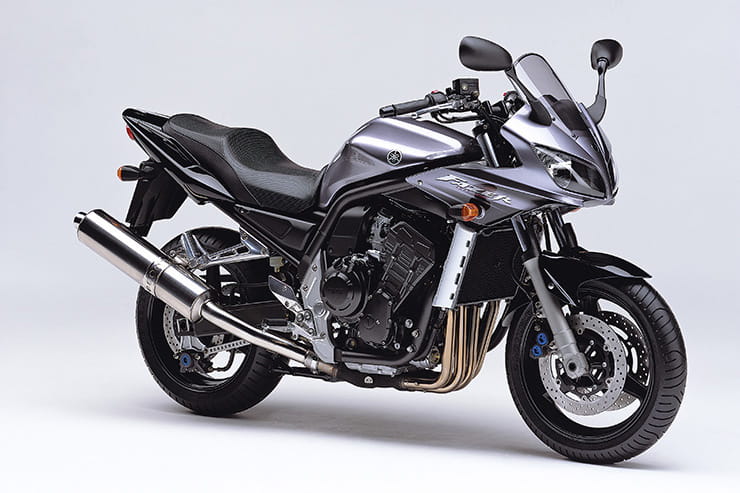 For a little more guidance from those in the know, why not visit the really active Fazer Owners Club (wonderfully called FOC-U) at:

However if you are into modifications and tweaking your FZS, the Fazer 1000 owners club is a good place to have a look through: