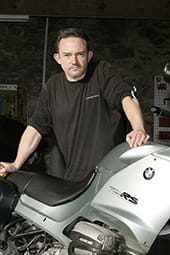 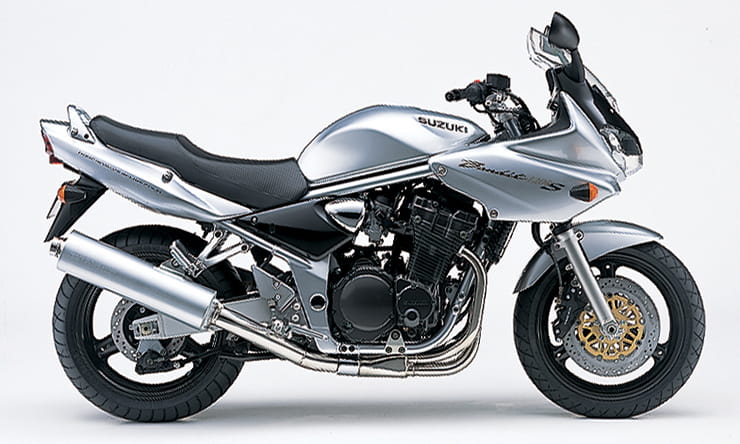 The Bandit series was a masterstroke on Suzuki's part. first seen in the Japanese domestic market with the funky little GSF250 and 400, it really took off with the 1995 worldwide launch of the GSF600. With a tough, detuned sportsbike motor in a good-looking naked chassis, with budget running gear and finish, it was fun enough to appeal to hooligans, easy-going enough to attract new riders, and cheap enough to appeal to anyone. Crucially, it was also easily improved by bolting on bits from sportier Suzukis. A cult was born, but it was the 1996 Bandit 1200 that really gave it legs. With a big-bore, torque-tuned version of the original GSX-R1100 air/oil cooled motor, it had enough grunt for effortless wheelies, and enough tuning potential for everything from donuts to the dragstrip. The suspension and brakes could be swapped for GSX-R bits, but to be honest in those taste-free days, owners were just as likely to cover the whole thing in garish anodized bolts and flip-flop candy paint, especially as the original finish on most parts was more or less water-soluble... Which didn't matter because it was cheap – £6,249 in spring 1996 was the same as the much less interesting GSX750F and a whopping 1800 quid cheaper than a Yamaha XJR1200, and 1800 quid bought you a whole lot of tyres, fuel and anodized tat back then...

With just one major update in its eleven-year model run, and thousands sold, the 1200 Bandit is a sound used buy – plenty of parts around, both new and used, plenty of accessories available and a whole word of tuning and modification knowledge. 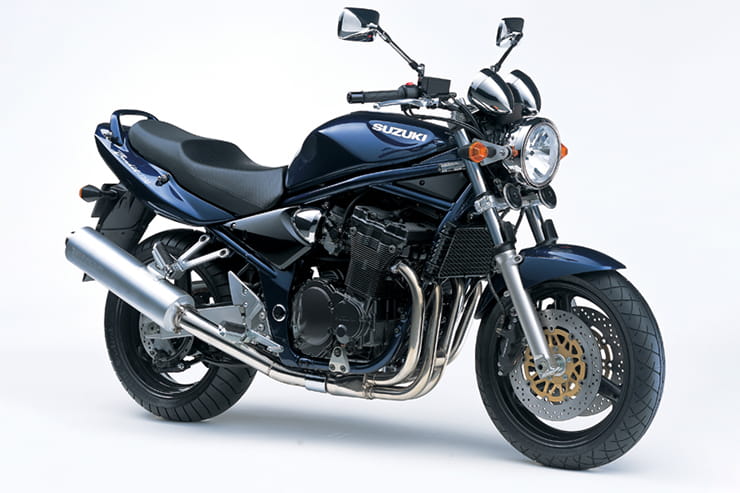 The engines are legendarily tough, and easy to service with their screw and locknut tappets, but they're not without their foibles all the same. According to Dave Solomon of the excellent Facebook group Butchered Classics (he's fitted many, many Bandit motors to old Kawasakis), it's age related stuff that's the problem: "They're got pretty weak clutches (it's a diaphragm design rather than the GSX-R's stronger conventional one), and the cams won't tolerate being run low on oil. But the main thing to watch for is the oil return pipes on the front of the motor behind the downpipes – these can and do suffer with corrosion and it's a top end strip if they fail, even though the motor will sound and run great until it lays all its oil over the road... The stock manifold bolts often need drilling out unless they've already been replaced with stainless. Aside from that there can be an issue if they're stored for any length of time, especially if left on the sidestand. The fuel tap can fail and cause the carbs to flood into the airbox and then the crankcase." So it's always worth having a sniff inside the filler cap to make sure it smells of oil not petrol, and be wary if the oil level is too high. while we're on the powerplant, the oil cooler is vulnerable to stone damage and subsequent leaks. Good used ones are hard to come by but there are plenty of aftermarket options. Going back to carbs, rough running can often be tracked back to the float heights being wrong, or the emulsion tubes worn.

Otherwise the biggest reliability issue is the same as most older bikes - ageing electrics, corrosion, sagging suspension. On the electrical side the wiring on older bikes is getting hard now, and insulation starting to crack. Add that to poor or corroded earth points and/or ill-advised additions and repairs, and you get all sorts of hard-to-trace gremlins. If the battery's dying, don't let the starter slog over and over - you'll risk burning out the wiring and killing the starter clutch.

The finish was never the best (although it got better with later models). Paint rubs off frame and tank in particular, plated parts rot, and the middle section of the original exhaust rots out (the downpipes and end pipes are stainless, the mid section mild steel). If you find a nice one, be prepared to give it plenty of love to keep it that way.

Suspension is basic, and likely to be saggy on anything with more than 20k miles. You can fit a whole GSX-R1100M upside-down front end (with the Bandit stem pressed into the bottom yoke) if you can find a set these days. Alternatively, adjustable RF900 fork legs bolt straight in. A rebuild, respring and revalve by a specialist will work wonders for the original forks though, without costing too much. The best place for the rear shock is the bin – a budget replacement from YSS or Hagon is waaaay better. Grease all the suspension pivots and swing arm bearings at the same time.

Brakes are good but need regular cleaning (the rear pad retaining pin's prone to complete seizure and the front pistons quickly corrode if neglected, and you might prefer harder compound pads for more power. Six pots add more complexity and need more cleaning, without adding any power or feel. Many owners ditch them for four pots.

One last tip – Bandit 12s offer plenty of potential for lairy tuning jobs, but if you're on a budget and just want a bit more snap in the lower gears (at the expense of a bit of top end), swap the front sprocket for a 14 tooth. Just be a bit wary the first time you wind it on in first! 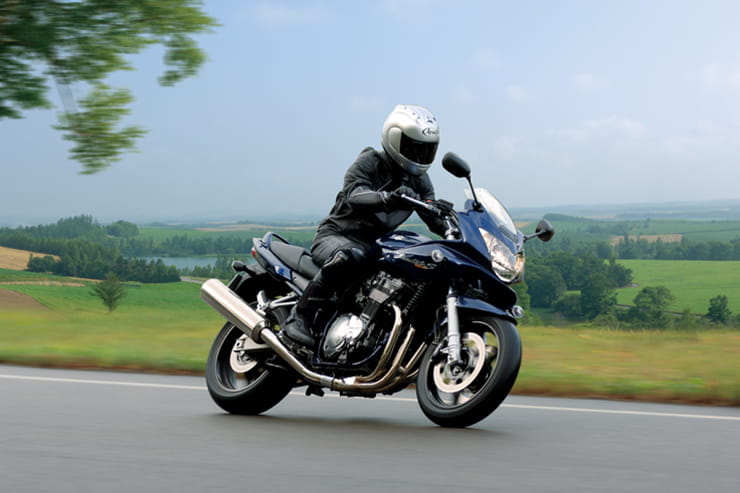 The original naked GSF1200N and half faired 1200S remained unchanged until they were replaced by the GSF1200N and GSF1200S K1 for the 2001 model year (although they were actually launched in mid-2000). The new models featured the same (with very few modifications, mostly emissions-based) 1157cc air/oil cooled engine and drivetrain as the original, but housed in an all-new frame which lost a bit of the original's Harris-inspired feel. There as also more intergrated bodywork which some find a bit bland after the original. The seat height was a fraction lower too. The suspension stayed largely the same but the four-pot calipers were swapped for more fashionable (but no more powerful) six-pots. Weight went up from 211kg for the naked original  to 214kg for the K1. The big difference was the S model - the original's half fairing wasn't really very effective and most owners preferred the naked one. With the K1, the fairing got better, and the lights got a LOT better – it became the more popular option as the Bandit's audience got a little more sensible with the passing years. The 2004 K4 model saw a new catalytic converter, a digital dash in place of the original analogue clocks, and a taller screen on the S. Finally in 2006 both models got ABS as an option, and a switch back to four-pot calipers, along with a very mild styling tweak. for 2007 the 1200 was dropped in favour of the new watercooled 1250 version. 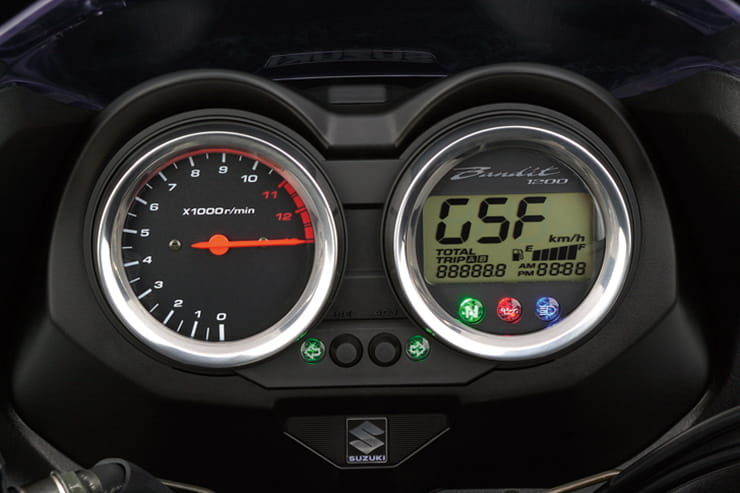 The days of really cheap Bandit 12s have probably been and gone, smashed wrecks aside. Anything that's survived this long has probably been looked after well enough not to have fallen into the hands of the breakers and butchers looking for donor engines and suspension for older classics. That said, they're still not expensive. You can pick up a clean-looking 1200 for well under two grand, even from a dealer, so long as you don't mind a reasonable chunk of mileage. Which you shouldn't – condition is more important than mileage, and way more important than age. Keeping one of these looking nice has always taken a fair bit of effort, so if you find a seller who's made that effort and kept it sparkly, even where you don't usually look, that's a good indicator that the rest of the bike will have been looked after too. So it's not uncommon for really well-cared for early bikes to fetch more than indifferently-maintained bikes ten years their junior. Plus, as the early bikes acquire some rarity value, they're tending to hold their prices better than more common later models anyway.

The sweet spot between price and choice is probably somewhere between £2000-£2500. Don't be suckered into paying extra for personal modifications though, no matter how much the seller says they cost. A decent pipe, some sensible suspension work and maybe some luggage on later S models are all worth a bit of a premium, but flashy bolt-ons and cosmetics aren't. 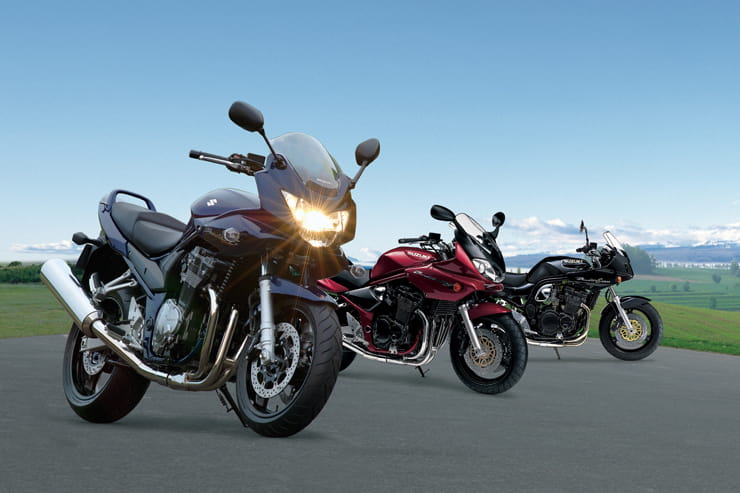 As you might expect with such a popular, long running model, there are plenty of resources and clubs out there for the Bandit 12. For starters www.banditownersclub.com is a traditional owners' club, with regular meets, club discounts etc., as well as an annual rally.

www.banditforum.co.uk does what it says on the tin. There's plenty of knowledge on there, and plenty of traffic too, despite competition from various Facebook groups (the 'Suzuki Bandit' group has over 27,000 members, and averages twenty or thirty new posts a day). For parts and accessories, www.justbandits.com supplies performance, dressup and service parts at reasonable prices. For OE parts, always worth checking with www.robinsonsfoundry.co.uk – often OE can be sa cheap as aftermarket!

For tuning and modifying advice, try Butchered Classics on Facebook, and for anything to do with serious tuning have a look at grumpy1260suzukispares.co.uk – Chris and Gary have decades of experience building and racing big old Suzukis.