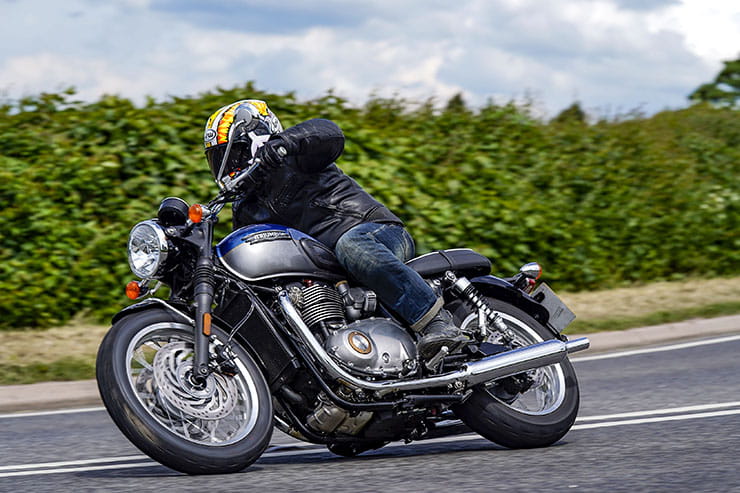 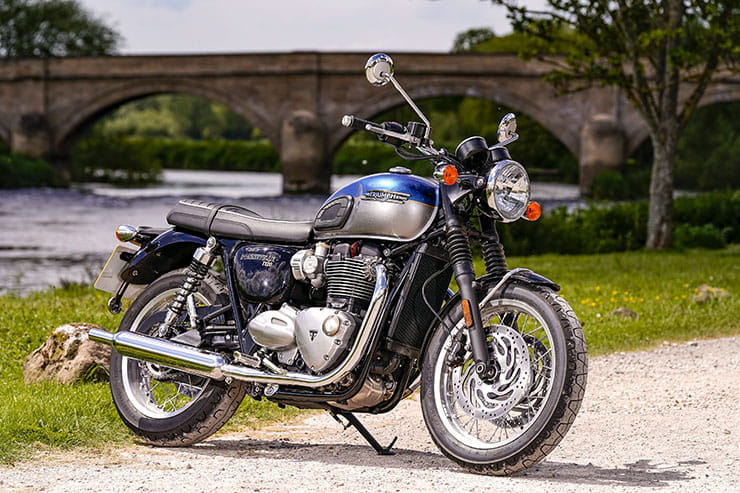 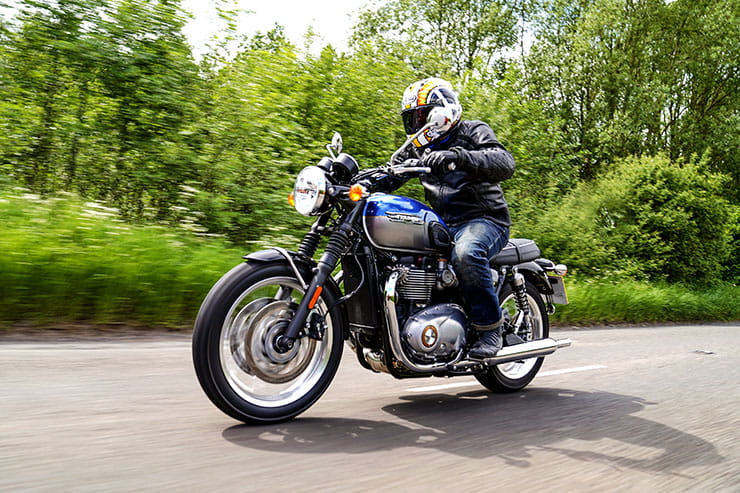 Salt goes with pepper. Fish and chips with the seaside. Guinness with Ireland.  And, for me, British summertime with the Triumph Bonneville T120. Is there a more perfect jacket-and-jeans bike on the market? Even for old racers like me it’s nice to get out of the one-piece leathers, stop chasing the stopwatch and take it easy. I’ve always praised Triumph Bonneville T120 (so-called because it was the first Bonneville capable of a 120mph top speed… ish) and having fallen for the classic Brit looks, the easy handling and the usability of the 1200 parallel twin, realising long ago that there’s no better way to explore the British countryside. And for 2021, Triumph has significantly improved the bigger Bonnie, as I was lucky enough to spend a week finding out. 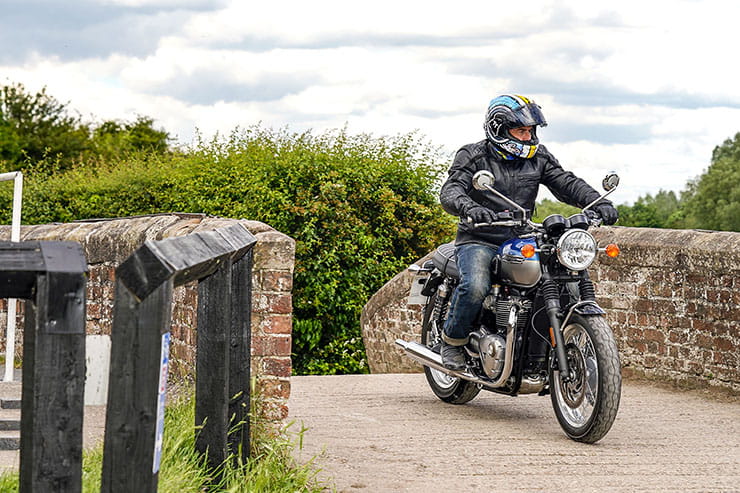 Arguably the closest competitor to Triumph’s new T120 Bonneville is their own T100. The T100 is a 900cc parallel twin as opposed to the 1200cc unit housed in the T120. The lower capacity of the T100 results in lower peak power (by 11bhp) and torque (16ftlb) that’s also produced higher up in the rev range. The T100 has a less attractive spec’, too, with just single front brake disc, no rider modes and no cruise control – but it is £1700 cheaper.

Just under £11,000 for the new Bonneville is a tempting offer, just below or on par with the competition, but with 116 official accessories to tempt you, it will be hard to leave the showroom on a standard bike.

Peak power and torque are the same as the previous T120 model: 58.8kw/78.9bhp @ 6500rpm and 102Nm/75.2lbft @ 3500rpm. But those on-paper figures only tell half the story, as the responsiveness of the big parallel twin has been sharpened. Triumph has reduced the weight of the crankshaft and, with improvements to the balance shaft and clutch, produced an engine that is more responsive and revs more freely.  Meanwhile, service intervals of 10,000 miles should reduce the cost of ownership for the owner, which moved up from 6000 in 2016. 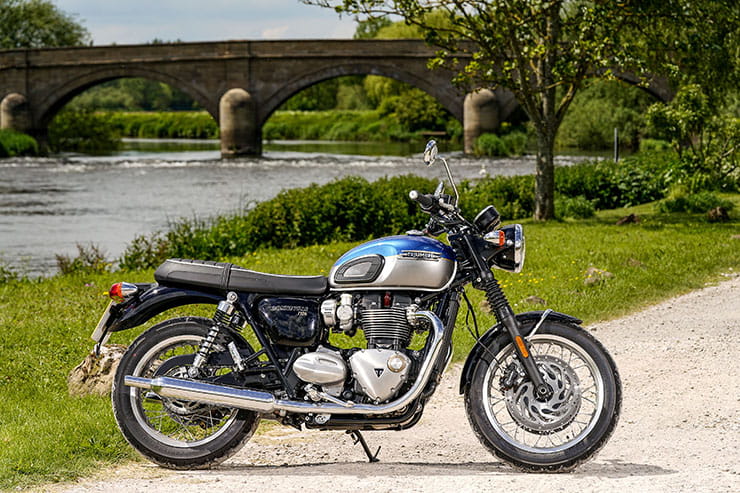 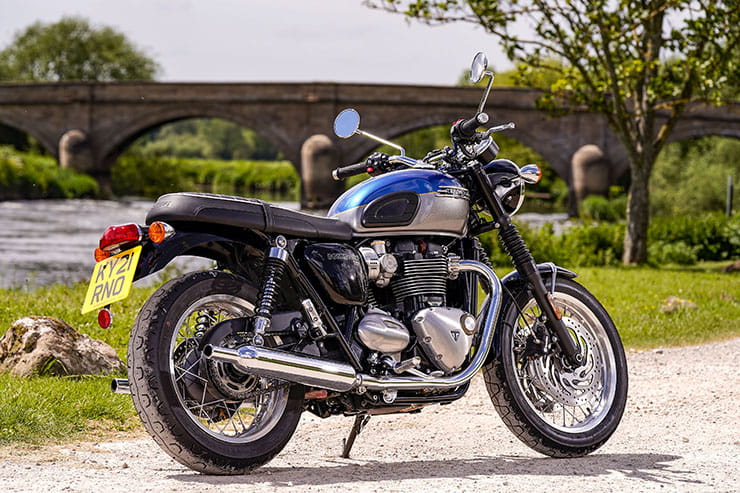 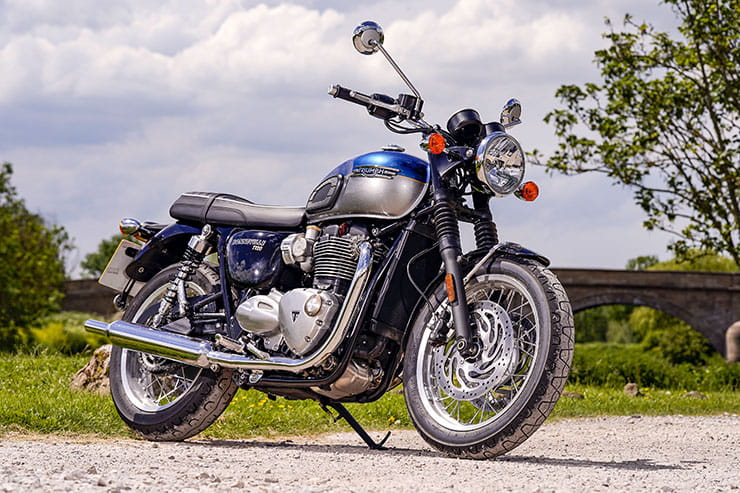 Don’t be fooled by the retro styling and heritage looks; this 1200cc British twin can pack a punch. It’s easy to get romantic about the evocatively nostalgic styling and forget there is a strong motor lurking beneath. There is serious grunt available from even low down in the rev range, while the free-spinning motor adds real urgency – in fact, I was taken by surprise on more than one occasion.

This wide spread of power and torque make the 1200cc T120 a hoot to ride. 100mph is easily achievable, 110mph isn’t a problem, and even 120mph – tucked in and lying prone over the twist-off fuel cap – should be possible on German autobahns later this summer… Turn off the traction control and it will happily lift the front in the first few gears. Yes, I know this is not how a T120 should be ridden, but like driving a powerful classic car that you’d rarely thrash, it’s nice to know it can still kick arse.

More realistically, that torque comes in handy for overtakes and takes the additional burden of a pillion or luggage with ease. My T120 also showed an embarrassed boy racer a clean pair of heels from the lights – poor lad probably wasn’t expecting a retro-looking bike to be that quick.

As I’d ridden the T100 the week before this test, I forgot the bigger Bonnie gets six gears, one more than the T100’s five-speed gearbox. Once I’d finally found sixth it was well worth it because, at 75mph, the analogue rev counter hovers around 3000rpm, the motor barely working as the bike cruises effortlessly on the motorway.

However, as much as I applaud the new Euro-5 engine, the fuelling and throttle response are a little snatchy, which may be down to the new lighter engine internals. Switching into Rain mode (do-able on the move) delivers softer fuelling and is especially useful around town. I’d also like a little bit more noise from the sculpted twin exhausts, which do a great job of hiding the new cat-converter, but lack a little character. 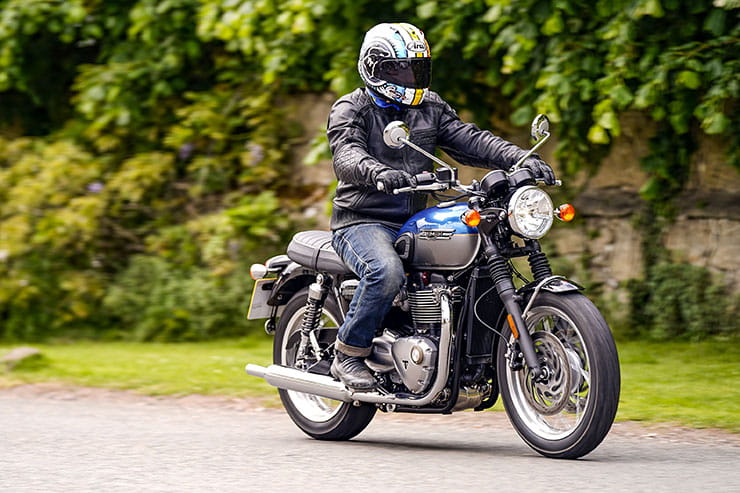 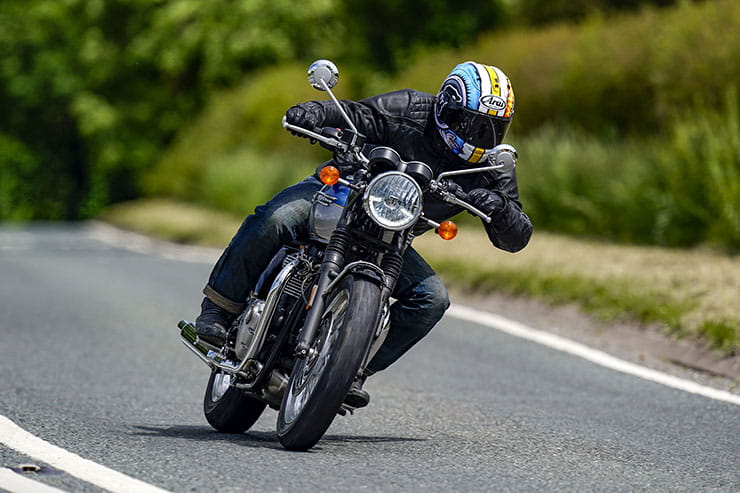 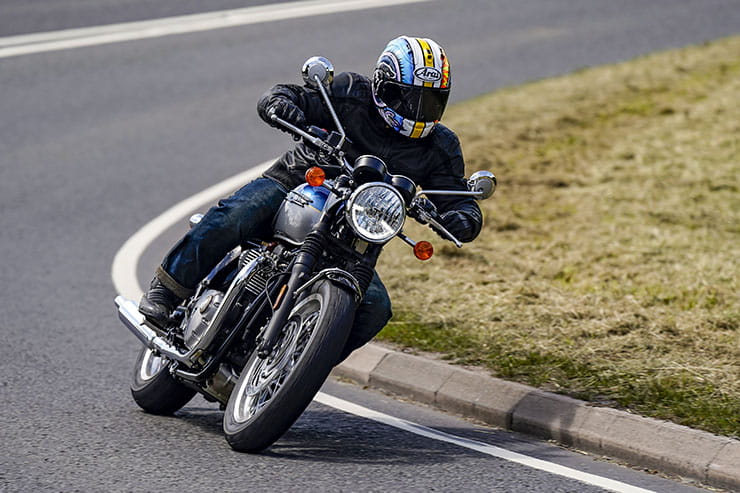 Triumph claim this is the best-handling Bonneville ever, and I have to agree. The British designers have managed to chop 7kg in total, which includes a 2kg weight saving on the new wheels (1kg per wheel). Cutting unsprung weight delivers a huge benefit as it allows the bike to steer quicker and easier. You feel this at speed, because the new Bonnie turns with more fluidity and is easier to flick from one side to the other at pace. So much so, in fact, that on a blast along B-road sweepers the T120 feels more nimble and easier to throw from side to than its lighter T100 relative, which on paper is lighter.

You can’t get too carried away, though, because the bigger Bonnie will soon start to drag its pegs, and if you lean too much there is a danger of touching down those lovely chrome exhausts. The grip and feel from the Pirelli Phantom rubber is there, but the ground clearance isn’t.

And for all its agility at pace, the overall weight of the bike is more apparent at slow speed, or when you’re moving the bike around in your garage. The low seat height and friendly ergonomics make the T120 accessible for new or relatively inexperienced riders, but there is no hiding that it is a heavy bike, which feels a little top heavy compared to the similar retro competition. 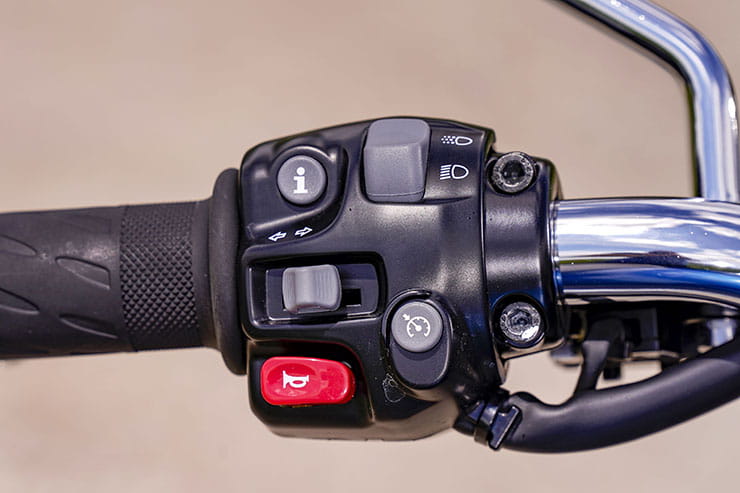 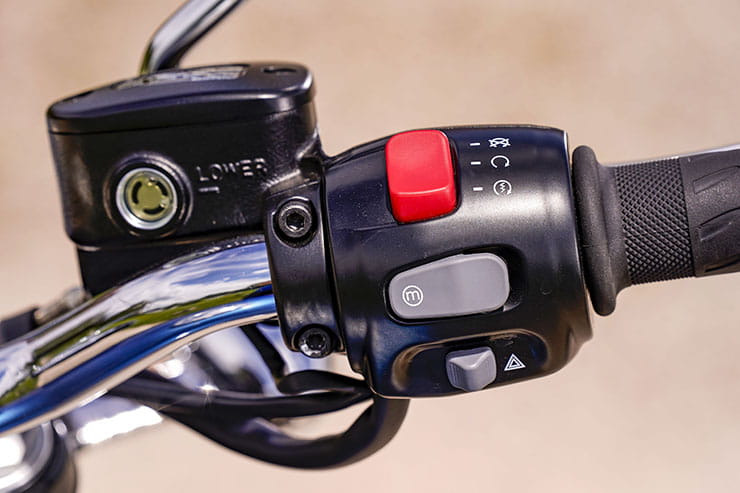 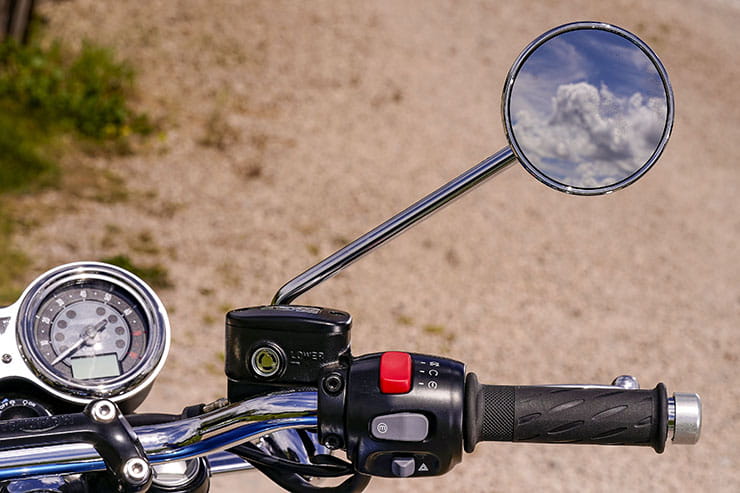 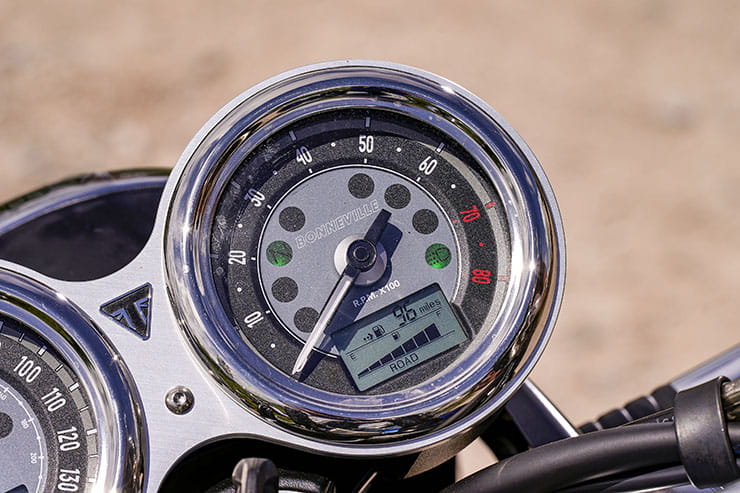 Triumph quote 60.1 mpg (4.7l/100km), and I averaged 59mpg (4.8l/100km), and for the majority of the test I was overriding the T120. I’d estimate most riders will attain over 60mpg. Expect the fuel light to come on at 130-miles or so which, according to the ornate clocks’ small but informative digital readout, will leave 35 miles in reserve. You’re looking at around two hours of motorway riding before thinking about fuel.

You might think the T120 is not for touring or the motorway, but with cruise control, comfortable ergonomics and a frugal engine I’d have no issue covering some serious miles on one. It’s only above 80mph that the windblast becomes an issue.

A brace of new sliding-calliper Brembo stoppers, along with that weight reduction, have improved the braking performance of the T120. Conventional (non-lean sensitive) ABS comes as standard and there is still a Nissin rear calliper at the rear. The front brakes are easy to use and have good feel while both brake and clutch lever are span adjustable. However, 236kg is a reasonable amount of weight, and this isn’t a slow bike, meaning some riders moving to a Bonnie from something sporty may expect stronger performance. Once or twice, while deaccelerating heavily off the motorway, I had to use four fingers instead of a casual one or two. 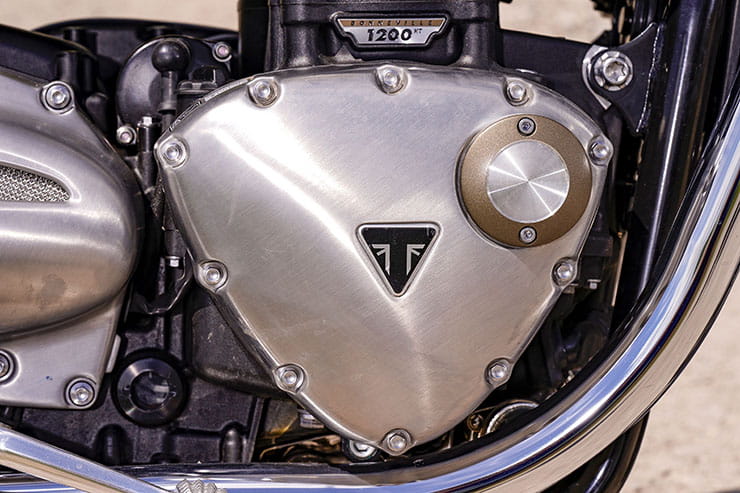 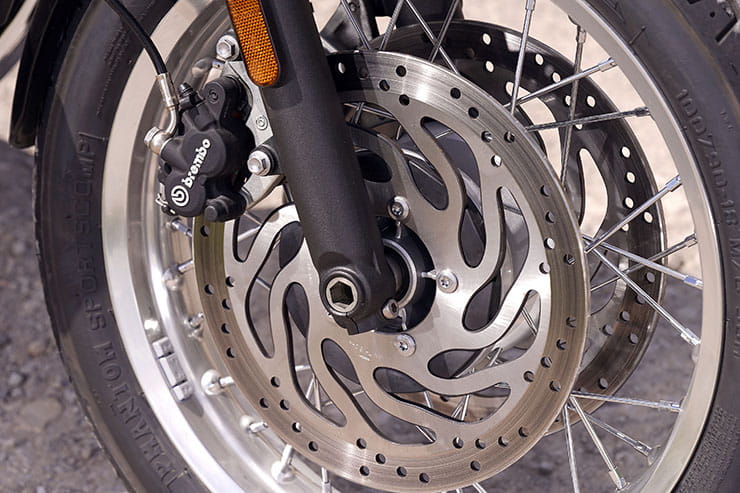 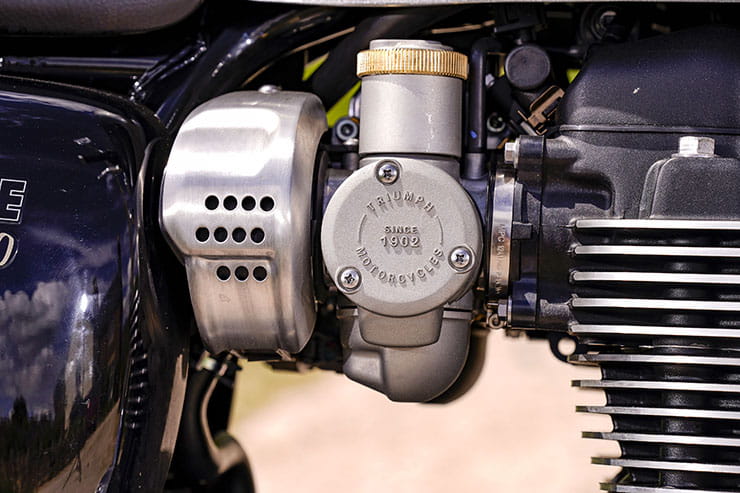 Cruise control now comes as standard and is very simple to operate – simply press one button and your speed is set. You can’t accelerate or deaccelerate once the cruise control is activated, which is a little disappointing, but arguably most owners will like the simplicity and ease of use.  I found it a bonus on long journeys or when sticking to a speed between average-speed cameras.

Two riding modes, Rain and Road, come as standard which is not a feature on the T100. The modes don’t change the power but do change the amount of TC and ABS intervention. TC can also be deactivated should you want to show off. There is no IMU on the T120, which means the rider aids are not lean sensitive.

As you would expect, there are an abundance of official accessories, 116 to be precise, so it couldn’t be easier to personalise the standard T120. There is also a rather attractive Black version… just like all bikes in Triumph’s current line-up.

The switchgear is simple and the clear analogue clocks give adequate information. There’s even a handy USB charging point under the seat.

As mentioned, I’ve always had a soft spot for Triumph’s Bonneville, an excellent jacket-and-jeans bike, that keeps things blissfully simple. You just ride it and have fun. We’ve only touched on the looks and nostalgia it engenders, but it’s a tick from me for both.

For 2021, Triumph has carefully improved the existing bike by giving it a gentle poke rather than a complete makeover. The engine feels more alive but, for me, the lighter handling at speed and improved brakes – along with the now standard cruise control – are the biggest benefits of the new model.

Down on power compared to some of the competition, it may also lack a little tech for some yet the T120 is one of the finest modern-day retro machines. 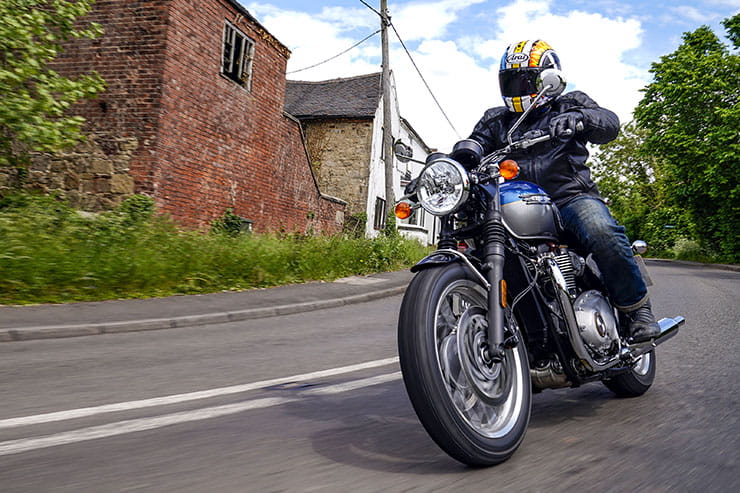 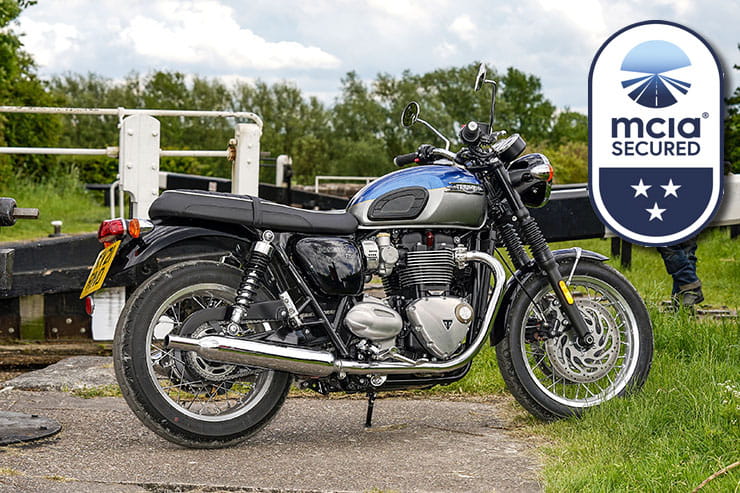