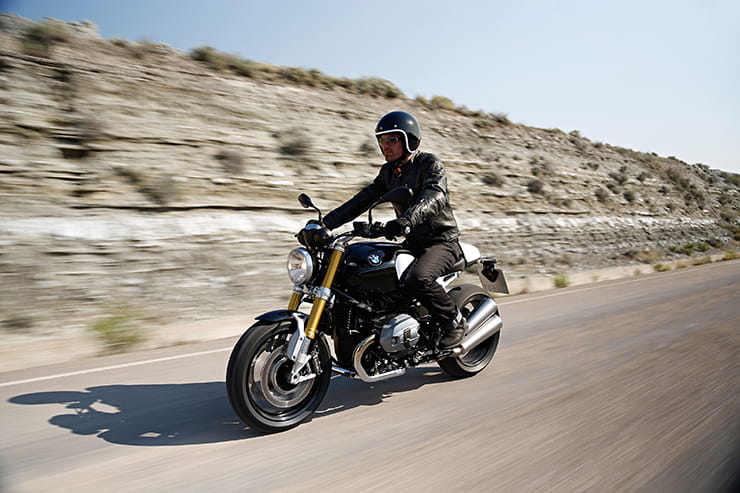 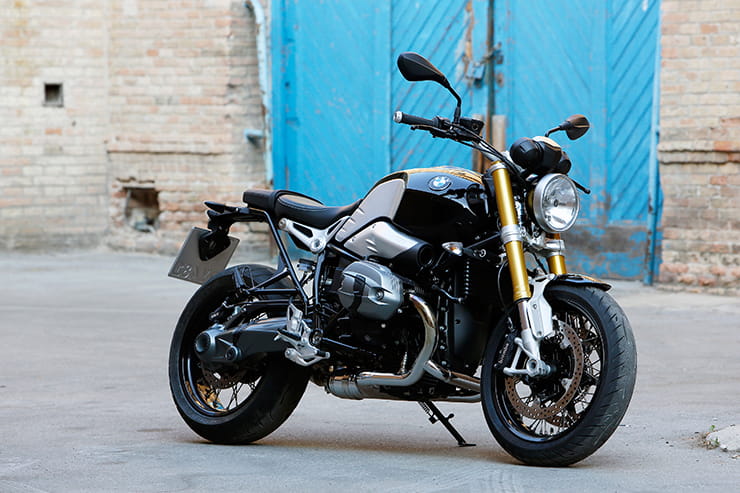 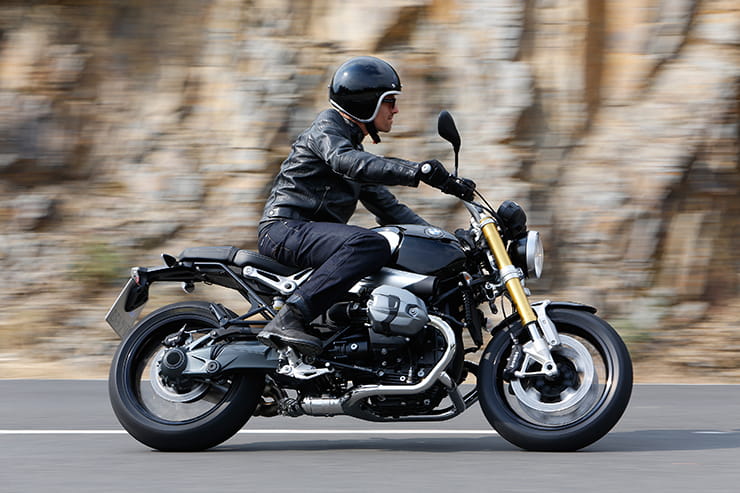 When the R nineT was launched in 2014 it arrived as something of a surprise. In an age when air-cooled motors were facing the chop due to emissions regulations (BMW had even water-cooled their boxer the year before), the fact BMW were releasing a brand new air-cooled boxer engined model range was a real shock. And not only that, they had done it in a fantastic looking retro that had a very ‘on-trend’ stripped-back home-built look that was also ripe for customisation. Could it really ride as well as it looked? That was the R nineT’s trump card because as well as brimming with spirit and character, this retro rode like a modern naked bike with impressive handling and top-rate running gear. The first in a line of air-cooled boxer retros, the original R nineT (which is now called the Roadster by BMW to separate it from the Scrambler, Pure, Urban G/S and Racer) remains a brilliant machine for leather jacket and jeans rides on a sunny day.

Although the R nineT sold out in its first few years, creating a huge demand for bikes, this is no longer the case and it is very easy to locate one in the used market. That said, they still command quite a premium when you consider their age and the fact it is meant to be a ‘basic’ retro! Luckily very few bikes cover many miles and as the build quality is very high, they tend to look factory fresh, which helps justify their price tag. A 2014/15 machine will cost you roughly £7500 in a dealership with a private sale reducing this to just under £7000. If it has a few BMW accessories or is very low mileage this price tag can creep up to £8000, which isn’t too much of an increase for a bit of bling. Prices for the later Euro4-compliant 2017 bike start at £8500 but as there is no real difference in performance or specification, you don’t need to splash the extra cash. That’s the great thing about a retro, the look never changes as the years pass – only the paint! 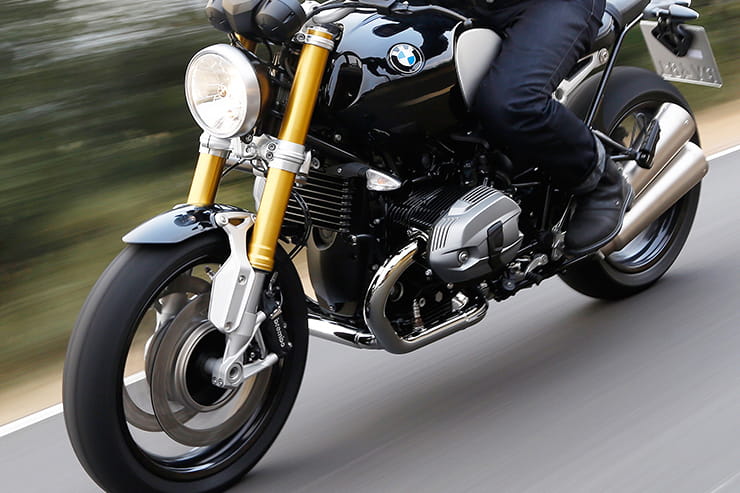 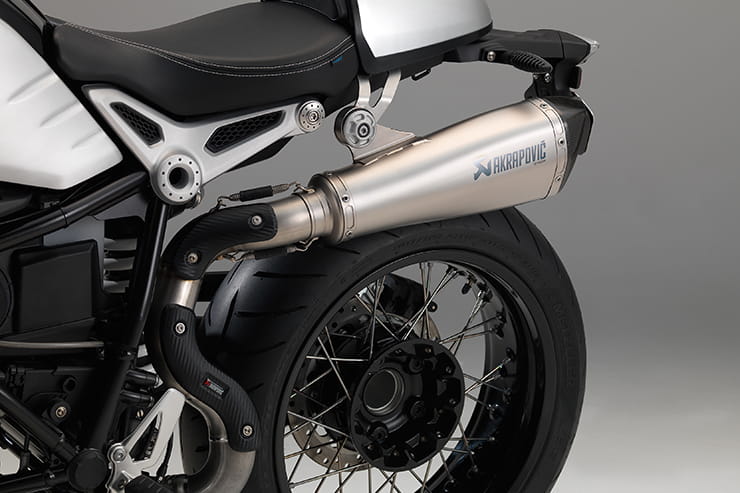 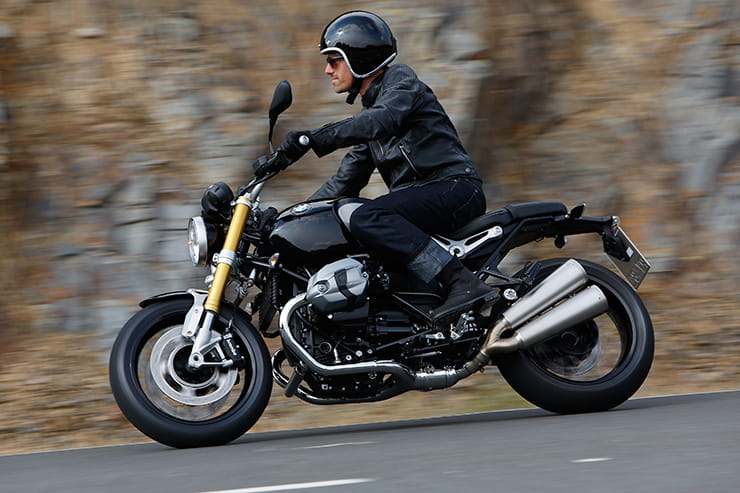 This R nineT is dominated by its air-cooled boxer engine and it thoroughly deserves to be the star of the show. With bags of instant torque, the throttle response can be surprisingly abrupt on the R nineT however this isn’t really a bad point as it adds to the character of the bike. Alongside the vibrations and the fact the motor has that ‘old-school’ boxer twist as it responds to the crank’s rotation when you blip the throttle, this is an engine that is brimming with soul, something that is desperately missing in some rivals’ modern retros. Let the motor rev and there is plenty of performance on tap, however as it is a naked retro you don’t want to be revving it everywhere – relax and ride the torque instead.

The 1170cc air-cooled boxer motor is a thoroughly tried and tested unit and has powered every one of BMW’s boxer range, so reliability is most certainly not an issue on the R nineT. There are no major worries and as long as it is serviced regularly (6000-mile intervals with the valve clearances requiring checking at 12,000 miles) it will run and run. Happily, due to its exposed nature servicing is also pretty cheap at about £250 and £400 if the clearances need inspecting. Although fairly clunky and a touch agricultural in its feel the gearbox is also solid and the only major worry is if the clutch is slipping as changing it is a major operation as you need to split the motor - but again, experience with GS models says this generally only needs doing at roughly 80,000 miles! It is always worth checking for oil leaks from the shaft drive system but these are unlikely unless the bike had covered big miles, which an R nineT won’t have done! BMW sold a variety of accessory exhaust systems with the high-level Akrapovič especially sought-after as not only does it look cool, it also adds a lovely snarl to the engine’s note. 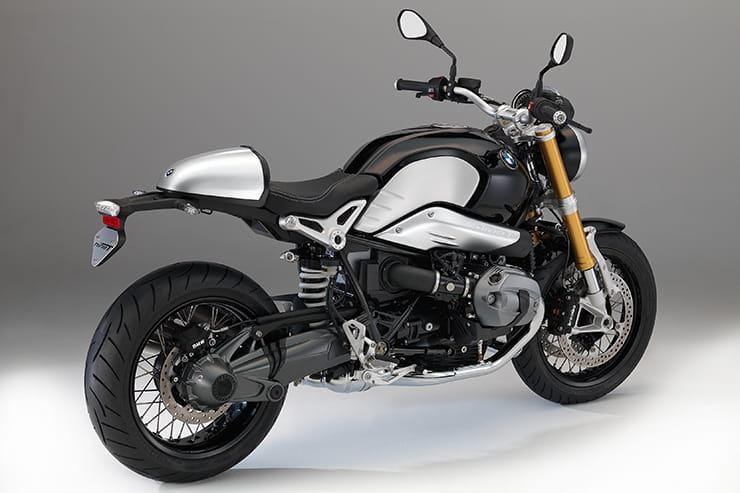 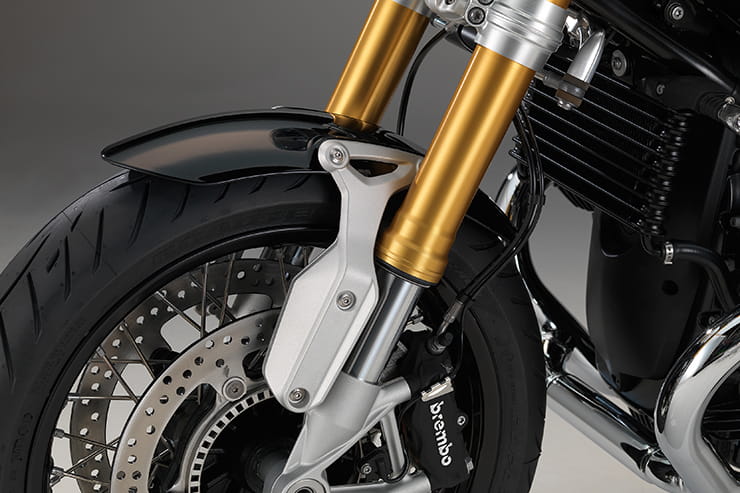 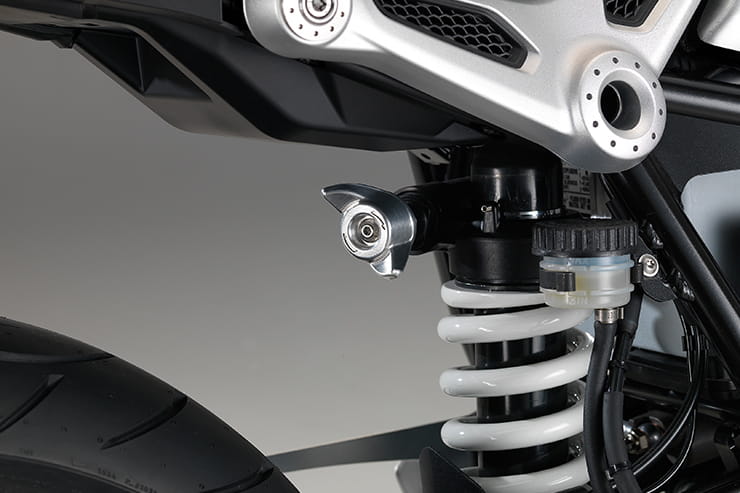 The boxer is a relatively frugal motor and low 40mpg figures are very easy to achieve, meaning roughly 140 miles can be squeezed from the 18-litre tank.

Unlike the Pure model, which has conventional forks, the Roadster has chunky 46mm inverted forks. Although lacking any adjustment, they are excellent for road use and the shock is equally well-matched, although if you like to push on it can be firmed up slightly through spring preload and rebound damping adjustment. On the go the R nineT is remarkably agile thanks to the boxer’s low centre of gravity, meaning that this is a bike that can most certainly hold its head up high against modern machinery. You won’t ride the BMW and be left wishing for something sportier on the UK’s roads and its low seat height of 785mm is also quite reassuring as at 222kg, the R nineT isn’t as light as its stripped-back look suggests. BMW were very clever when designing the R nineT and they built in a lot of potential for customisation so if you want a more stripped-back look you can actually remove the pillion seat and part of the sub-frame to create a solo-only bike, which looks very cool!

With ABS as standard and Brembo four-piston radial calipers with braided lines, the R nineT is certainly not left lacking in terms of its stopping power and there are no complaints in this department. Again, the higher-spec Roadster gets radial brakes where the Pure has conventionally-mounted items. 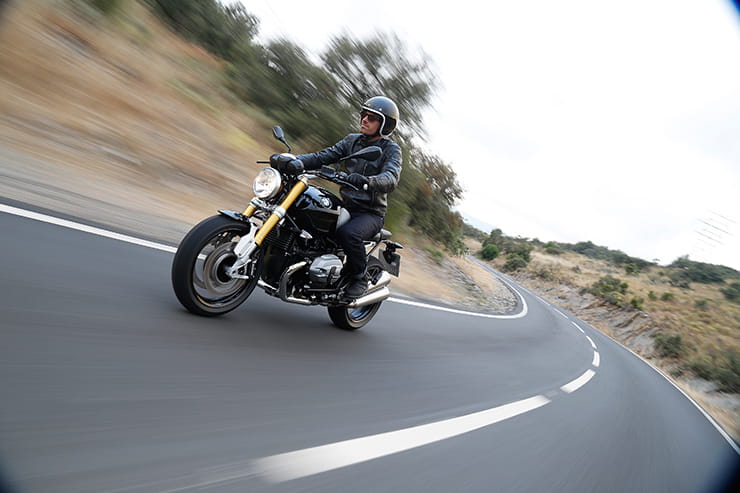 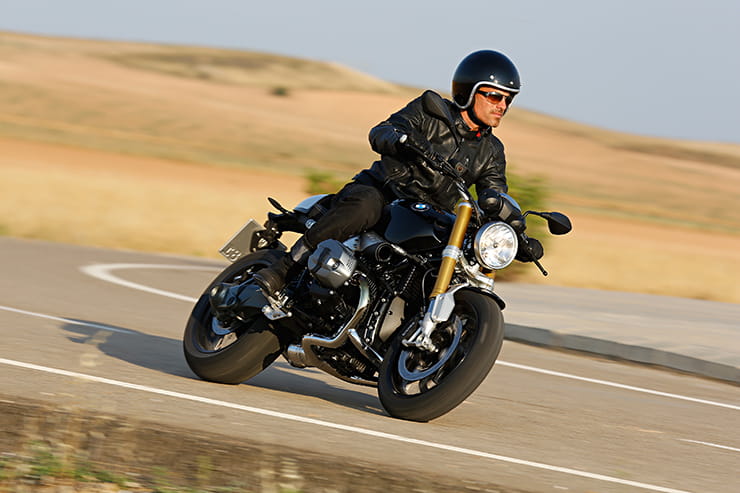 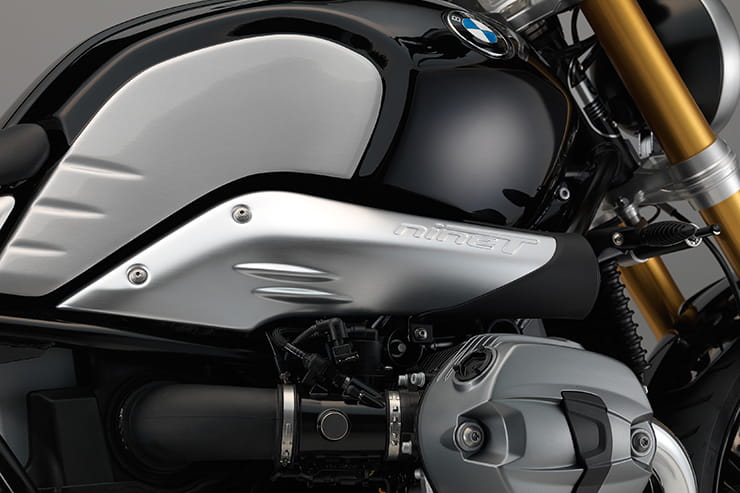 Although generally used as a sunny Sunday bike, the R nineT has upright bars and is fairly comfortable over distance as long as the speeds are kept down. It’s not a great motorway cruiser (you can add an optional fly screen) but it is fine for riding reasonable distances as long as you remember it is a naked bike. And it is a million times comfier than the torturous Racer version with its horrible low clip-ons...

BMW deliberately removed as many of the fussy electronic systems as possible on the R nineT range to give them a more ‘authentic’ retro feel. You get ABS as standard but traction control is an optional extra and that’s the end of the list of riders assists apart from heated grips or an alarm. In terms of accessories, however, they went to town and as well as a selection of Akrapovic exhausts there are carbon mudguards, screens, luggage and a very cool ‘bullet’ aluminium seat cover, which looks amazing. Accessories do add value to an R nineT, so expect to pay extra for one that has been accessorised with BMW-official bolt-ons but avoid any that have been heavily chopped about. 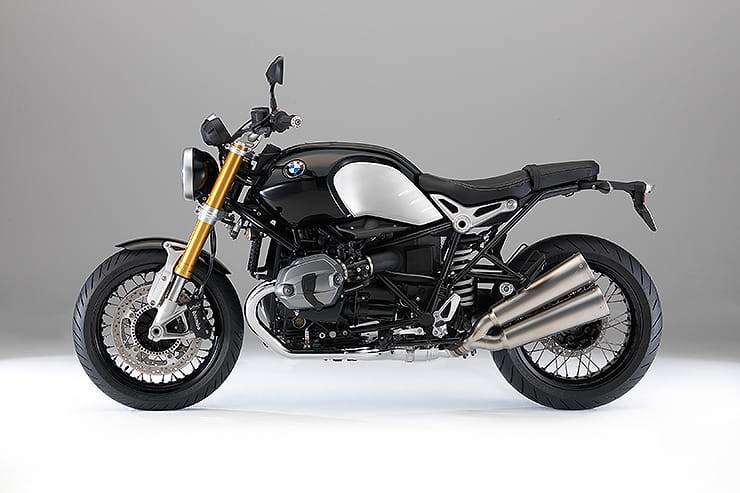 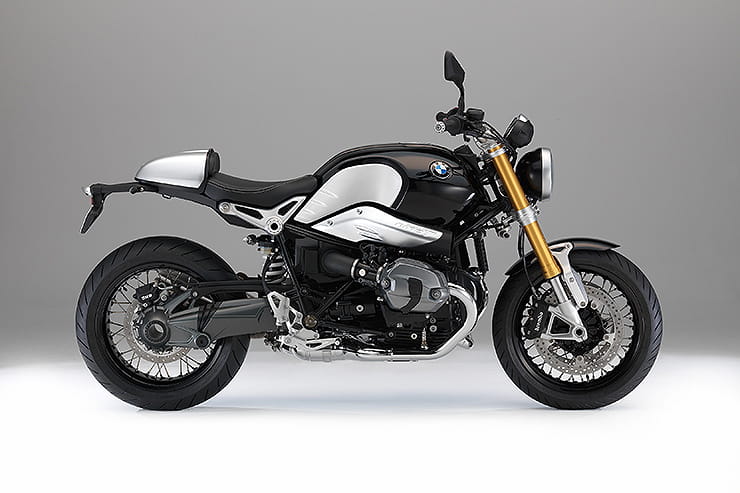 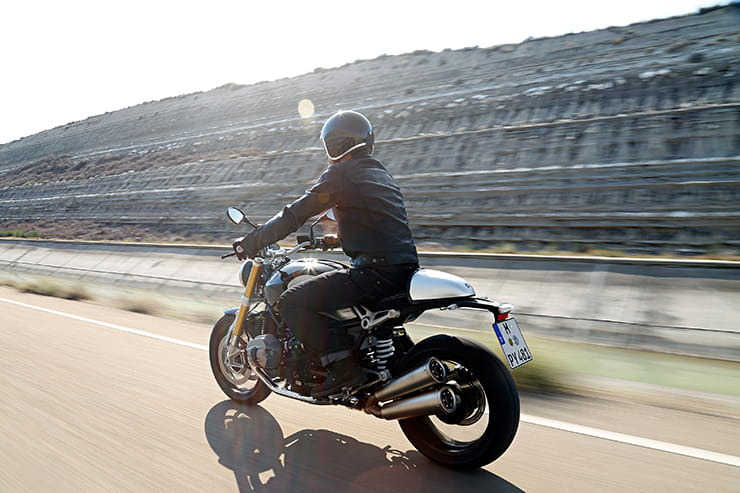 The R nineT is a bike that gets under your skin and is a fabulous machine for anyone looking for a retro that has bags of spirit and soul as well as modern handling. It’s not the cheapest out there but it is one of the best-looking with lots of scope for customisation and also the most fun to ride.

Three things we love about the R nineT… 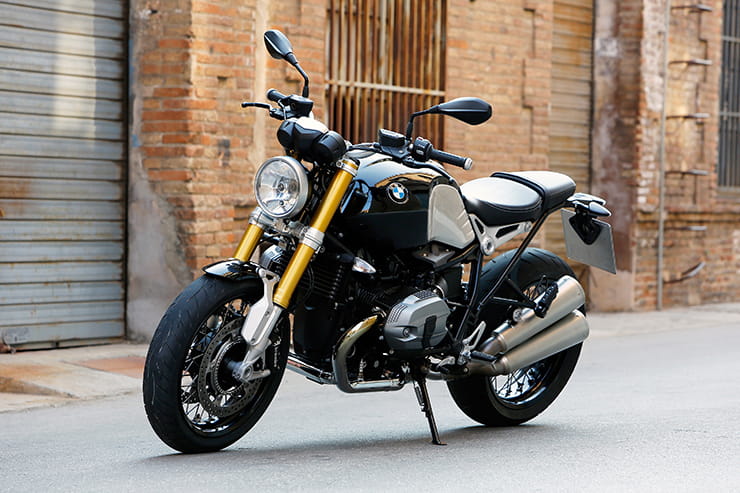