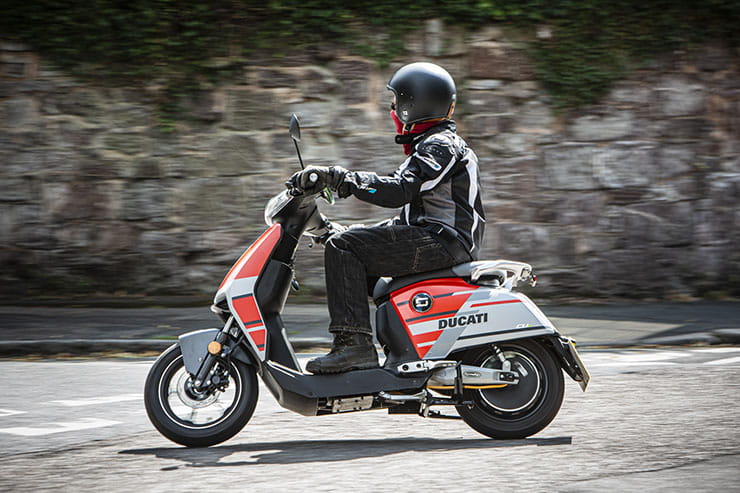 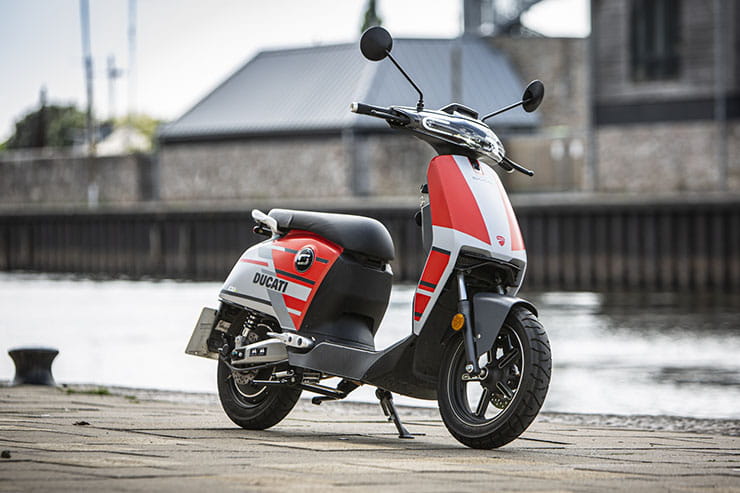 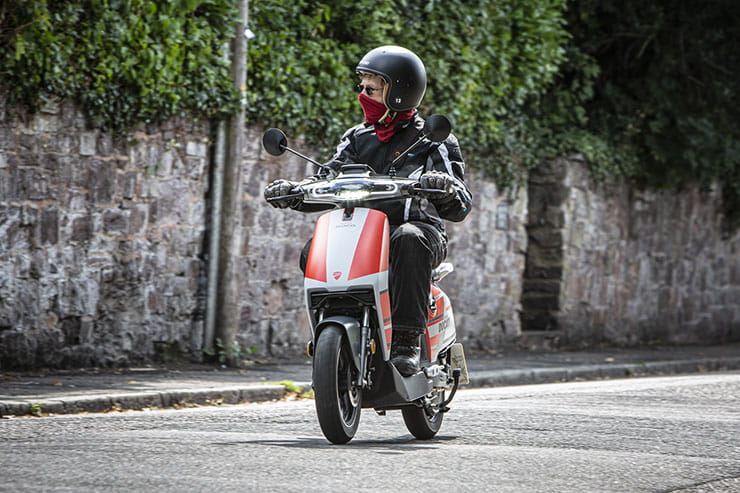 If you thought practical electric motorcycles and scooters were still years away, then think again. True, they still only make up 4% of total two-wheel sales, but things are very different in the moped market – one in three new mopeds are now electric, according to the MCIA, with sales up by over 200% since 2020. Food delivery services and a pandemic-related shift in commuting popularity have contributed of course.

It's easy to see why the electric takeover is coming here first. By definition these little 50cc (and equivalent) scooters are only used for short urban hops, so battery range isn't an issue. Buyers look for ease of use, low running costs and minimal maintenance, and electric power ticks all of those boxes. Super Soco is one of the front runners in this small but growing market, with the motorcycle style TC/TSX and 125cc-equivalent CPx scooter that we’ve ridden and reviewed. This, the CUx – a 50cc equivalent – is its entry level bike. 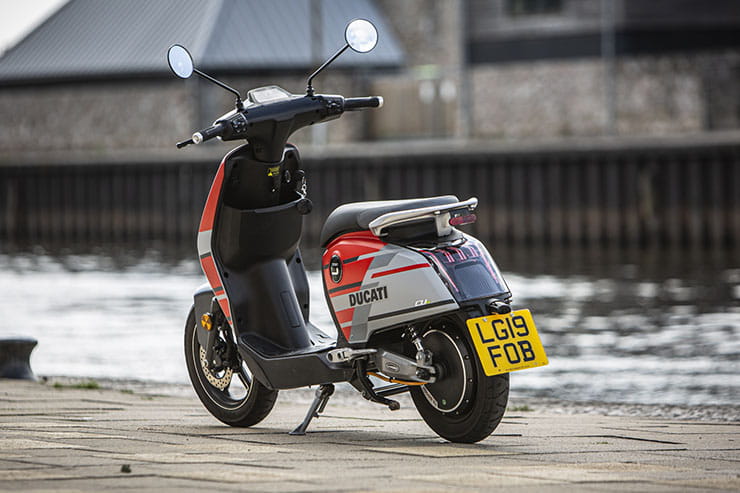 The CUx isn't the cheapest electric moped on the market, but still has price on its side, at £2249 on the road (or £2499 in Ducati livery). It's undercut by the bare bones Niu UQi (£1996) and the entry level Lexmoto, but everything else costs more, including the Made-in-Spain Silence S02 (£2695), Artisan (£2636) and the Vespa Elettrica (a whopping £6300). All prices are after application of the government's Plug-In Grant, which knocks up to £1500 off the full whack. If that's still too much upfront, PCP and straight finance deals are available on the CUx, from £52.47/month at 8.9% APR.

Mopeds are restricted to 4Kw, which is a mighty 5.4bhp, so there's not a lot of power to play with. With top speed also limited to 28mph the best one can hope for is nippy enough acceleration to keep up with urban traffic away from the lights – especially if you've just filtered to the front of a queue of fuming cars… piloted by fuming drivers, probably.

The Super Soco is good enough for that. For a start, it weighs only 74kg, and as everyone and the dog knows by now, electric motors provide almost instant torque off the line – no revving, no waiting for the transmission to catch up, it just goes. The Cux is rated at 2.8Kw max power and 1.3Kw continuous, with three power levels. Level 2 gets you up to an indicated 27-28mph reasonably quickly (it's all relative) with the smooth motor silently doing its thing.

The test bike would actually top 34-35mph in level 3, but apparently it was derestricted and customer bikes don't come like that. If it was me, I would ask the dealer to derestrict it and square this with my insurer before getting on the road (yes, good idea – Ed), because 28mph isn't really quick enough when the traffic is flowing more freely, something that's endemic to mopeds. In level 1 the CUx tops out at 20mph, which is handy for 20-limits, still with useful acceleration up to that speed. 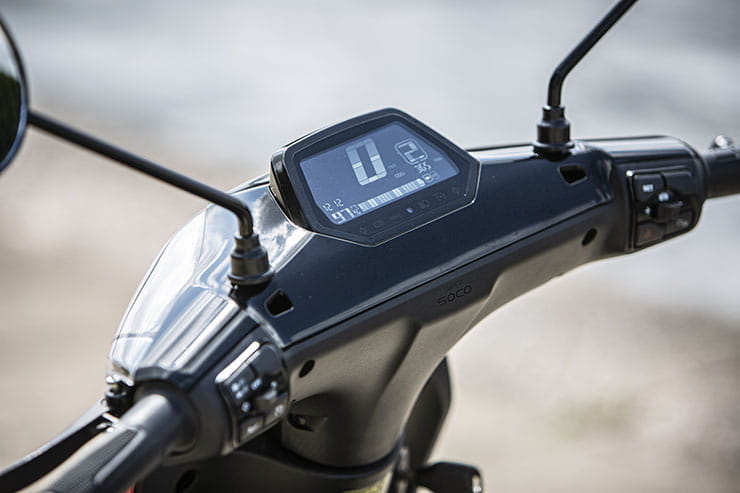 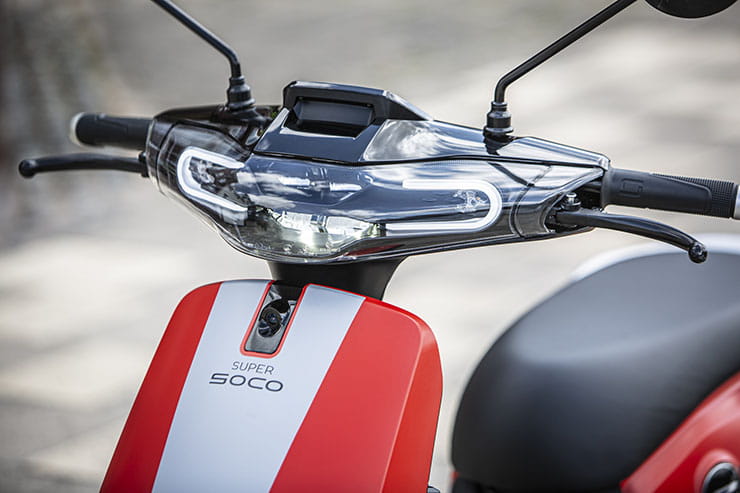 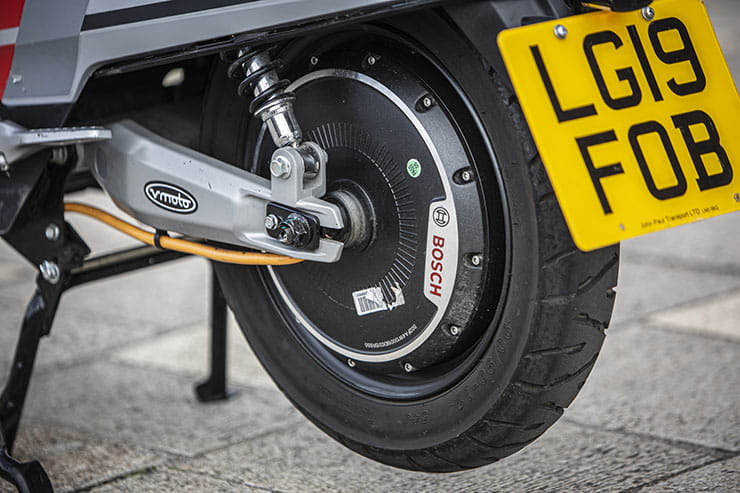 Above: spot the rear-wheel mounted motor

Not much to say here. The Bosch-branded motor is mounted in the rear wheel, so there is no transmission to speak of. And the motor itself is a straightforward air-cooled job, of which countless thousands are already in service. There's no oil, no filters and no drive belts to change.

Flat dwellers, relax. The CUx's 1.8kwh lithium-ion battery lives under the seat and after unplugging (dead easy to do) it lifts out for taking indoors to recharge, so there's no need to bother with extension leads. At 10kg the battery weighs about the same as a heavy bag of shopping, which is substantial but not over the top.

Range is the million-dollar question and Super Soco claims 40 miles before recharge time. The test bike was down to 13% after 31 miles zipping around Exeter, most of them at 30mph-plus, so if you keep to 28mph that 40 miles looks realistic.

The charger is too big to carry on the bike, so you'll have to keep that at home or work. When you do plug in, the importer reckons that a full recharge at a domestic three-pin socket takes 3-4 hours and costs 29p at typical rates. That's pretty cheap transport to cover 40 miles, when a typical 50cc moped would cost around £3 in petrol. For the time being, electric bikes still qualify for zero road tax. 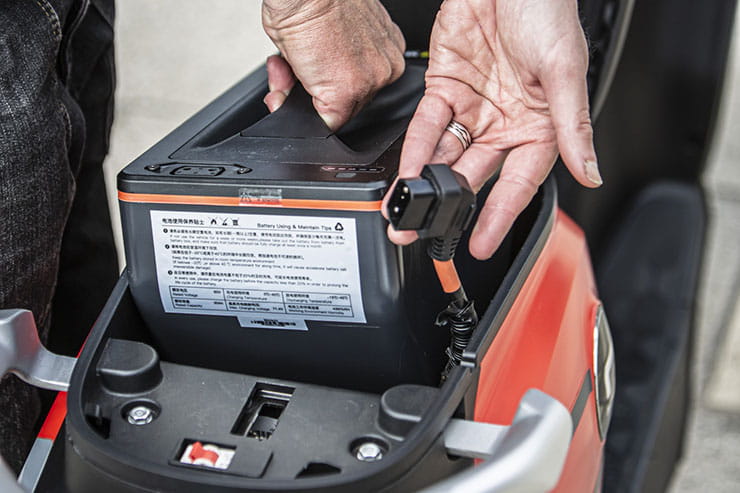 Above: removing the battery to charge indoors is a doddle

This is a moped, so by its very nature, the chassis and suspension aren't built for speed, but the CUx acquits itself pretty well. The basic front forks and twin rear shocks (with pre-load) do a good job to keep everything under control and the Cordial tyres on 12-inch wheels hang on well. Bigger wheels and a longer wheelbase would make it more stable, but at urban speeds it's not really an issue. I've already mentioned the scooter's 74kg weight (which includes the battery) – that's another bonus when parking as it's easy to push around.

Again, moped performance doesn't require nose-diving brakes, and the CUx doesn't have them. The front and rear single discs are linked and give good progressive stopping power without locking up (at least in the dry), so that's all right then. Unlike the pricier electric bikes, there's no regen to put power back into the battery when slowing down.

Mopeds don't need long distance comfort either, but it's nice to know you can ride right across town without bum ache. I spent two hours riding the CUx around Exeter and felt fine at the end, though like all mopeds the Super Soco is on the small side, so six-footers will feel cramped. The same goes for pillions – squeezing two of you on board looks possible, but not for very long. 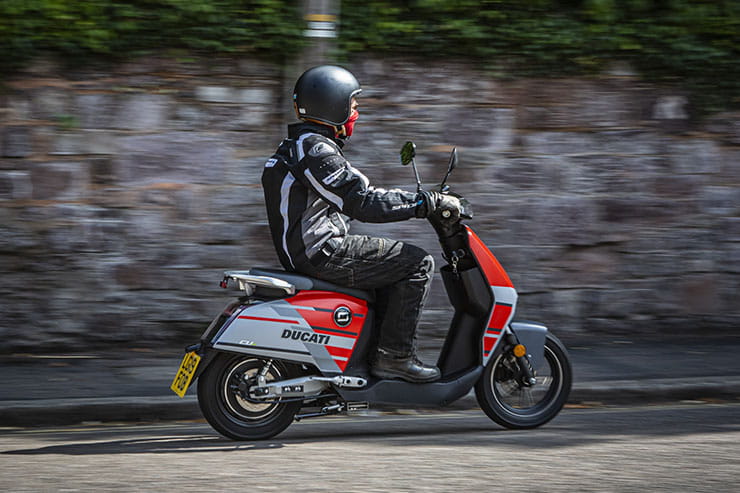 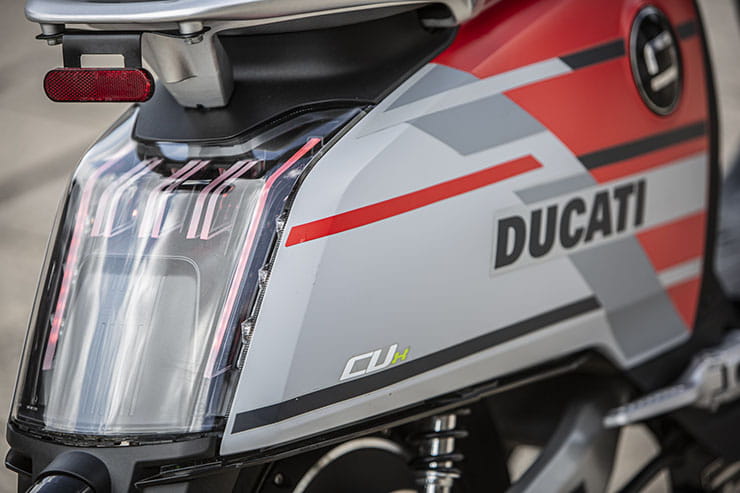 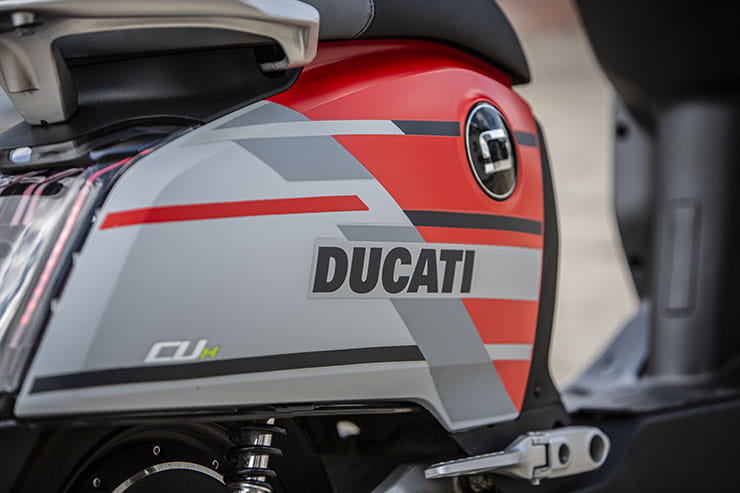 Switch on (keyless if you want, it'll do either) and there's a friendly 'bloop bloop' signal as the dash lights up. Talking of noise, what the CUx doesn't have is an indicator bleeper to warn pedestrians that you're coming through. But has this fear of 'silent killer' electric bikes been overblown? I've ridden lots of them over the past three years and never once had a pedestrian step out in front of me, but I guess there's always a first time. Anyway, the dash is a simple, clear display with speedo, steady battery % meter and clock, which is all you need for commuting.

The CUx isn't that basic though. As well as the keyless ignition, the scooter is Bluetooth enabled, and downloading the relevant app gets you the usual track, trace and monitor features with an alarm. There's a USB port for your phone, of course. Another useful feature (a £66 option) is a camera built into the front option for stills or video – very handy for traffic 'incidents.' Sadly, the Super Soco is one of those e-scooters whose under seat space is entirely taken up by the battery, though you could just squeeze in a pair of over-trousers. There is a cubby at the front and a bag hook, though I'm sure most will pay extra for a topbox.

Now, we haven't mentioned ‘Ducati’ as I’m sure you’ll have notice in the pics. The CUx comes in standard colours or the test bike's Ducati livery. It's good, not overdone, and doesn't look too out of place. Better still for Super Soco, it's got them a toehold in a few Ducati dealerships. Buyers seem to like it too, half of them paying the £250 extra for a tiny electric Duke. Apparently, it's been more popular with the Brits than any other nation. Work that one out...

I liked the CUx a lot. It's well priced (especially if you can do without the Ducati colours), has all the usual electric scooter mod cons and looks like it'll make the 40-mile claimed range. A slightly higher top speed would make it safer in traffic, but that's endemic to all mopeds. Otherwise, it's perfect for commuting and from a trustworthy brand making its name in the EV commuting world.