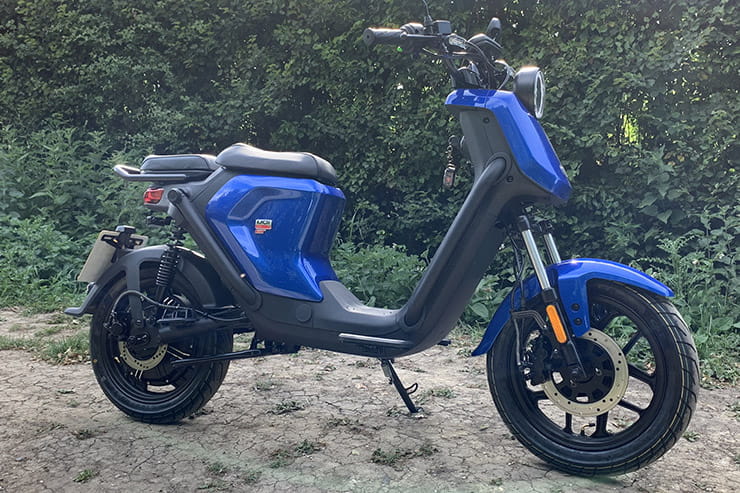 The promise of affordable, enjoyable, reliable electric motorcycles has taken a long time to become a reality. Solving the problems of easy charging (especially for those who don’t have a driveway or garage with power, or live in a tower block), cost and range anxiety are harder than you think. Unsurprisingly the game changing machine is not some kind of ‘million-mph’ superbike replacement, but a simple funky commuter. NIU is a Chinese scooter company that builds high-spec, cool-looking vehicles to a very high quality and sells them at comparable prices to petrol equivalents.

This UQi GT model has the potential to do for electric scooters what Honda’s all-conquering C50 Cub did for the petrol engine. You can ride it aged 16, requiring just a Compulsory Basic Training (CBT) certificate and insurance. How you judge the performance depends whether you are upgrading from a pushbike (in which case, welcome to world that goes twice as fast as before), replacing your rail season ticket (congratulations you have three additional hours a day to hug your children) or running it alongside your motorcycle for a short urban commute (which feels very slow at first, but you soon get used to it).

The NIU is simple to ride. It feels light like a bicycle, stable like a scooter and handles well, brakes even better and makes very light work of urban commuting.

The running costs are so small as to be barely measurable and the convenience and ease-of-charging makes commuting as simple as it always should have been. 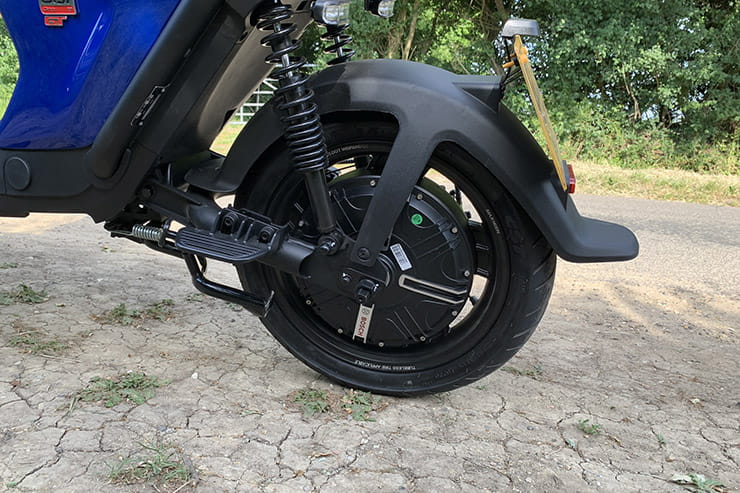 List price is £1996 including the Government electric vehicle grant. Given the quality of technology in the motor, battery and drivetrain, that’s very good value. Even more so when you consider that you can easily spend twice that amount  for many of the electrically-assisted push bikes out there. The difference between the NIU and those push bikes is that many of the bicycles come in restricted (15mph maximum) form and don’t require CBT, registration, insurance or a legal requirement to wear a helmet. The UQi is classed as a moped meaning that you do need all of the above. 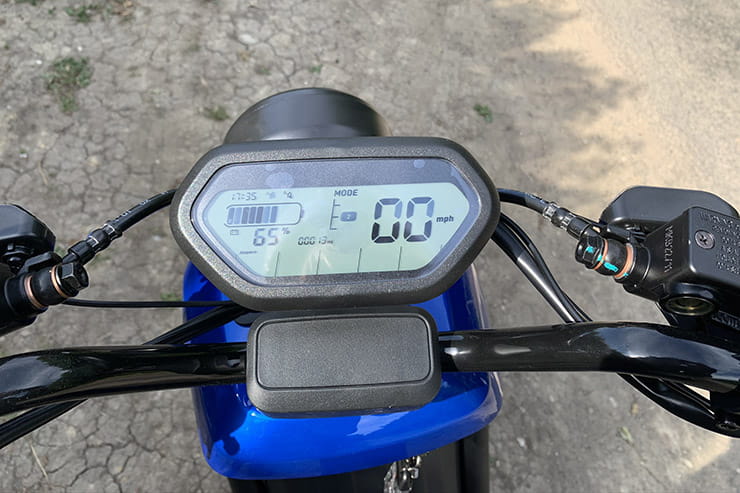 31mph is as fast as it goes

The electric motor’s equivalent power is quoted at 1.6bhp but you can’t really compare electric bhp with petrol figures because the difference with electric power is that you get the full torque of the motor from the moment you twist the throttle and torque is much more important when you’re goal is to get away from the traffic lights ahead of the traffic. The UQi’s torque figure is equivalent to a typical 250cc motorcycle giving it strong low-speed acceleration. Unlike the motorcycle though, the acceleration runs out at 28mph, by which time you are in front of the queue.

Thankfully, that acceleration is both impressive enough to beat most cars away from the line, but also controllable enough to keep novice riders, still adjusting to a vehicle that goes three times as fast as their BMX, rubber-side down.

Top speed is limited to 28mph, which, if you are reading this as a motorcyclist sounds very slow and possibly dangerous. But, if you are reading this as an urban commuter looking for a way of getting to work that doesn’t involve risking the 7.52 Southern Rail petri dish from Peckham to Victoria or pedalling, Lycra and the need for a full makeover on arrival, then a simple, affordable and efficient vehicle that goes three times as fast as the average vehicle speed in London sounds very appealing.

And that’s the point here. Having the acceleration to get away from the lights ahead of the cars, vans and trucks makes it safe. You arrive at the back of the next queue first and then filter cautiously (because the big drawback of silent electric power is that no one knows you are coming) to the traffic lights at the front of the queue and repeat till you get to work, embarrassingly early, wide-eyed, refreshed and ready to take on the finance dept.

I spent the first five miles riding the NIU UQi like a motorbike, determined to do 28mph everywhere on full throttle. After using 20 per cent of the battery in just five miles, I got smart and rode intelligently, making the most of the bike’s advantages as described above. Typical speed in heavy traffic was around 20mph, I was still at the front of the queue at every traffic light and the battery range increased by 50 per cent. 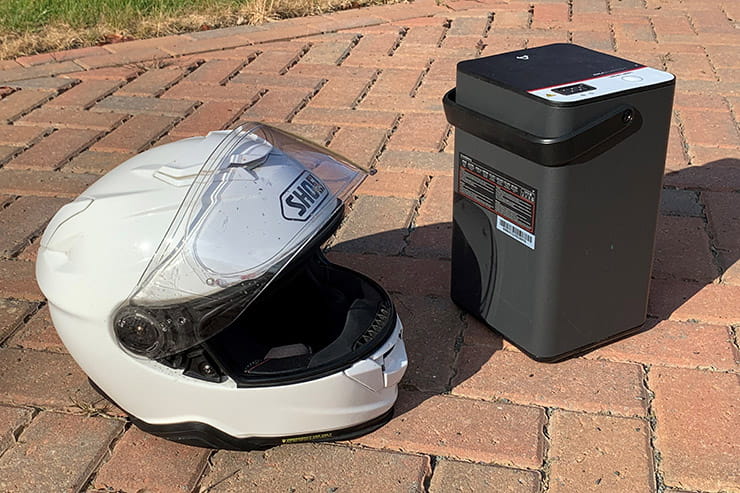 Battery is bigger than you’d imagine and heavier too.

The electric motor mounted in the rear wheel is made by Bosch and is rated at 1500W with a 92.6% efficiency. Power delivery is smooth once moving, but occasionally, when pulling away from a junction, the transition between no power and power can be a bit abrupt and not as predictable as you’d like. It’s like having a throttle cable with a bit too much slack in it, even though there is no cable – the throttle is a potentiometer, like a volume control on your hi-fi.

There are two power modes; full power and a restricted ‘get-you-home’ mode that cuts the speed by about 50 per cent but uses a fraction of the battery power.

The battery is a Panasonic Lithium Ion unit that can be removed easily from the bike for convenient indoor charging. It’s surprisingly big and heavy (7kg) compared to those in electrically-assisted bicycles because, of course, there is no pedal assistance on the UQi. As a motorcyclist, still waiting for a credible electric motorcycle to come along, it’s also an interesting illustration of the challenges in making a battery pack that could provide the power required to maintain higher speeds and also supply the range required to compete against a petrol bike. 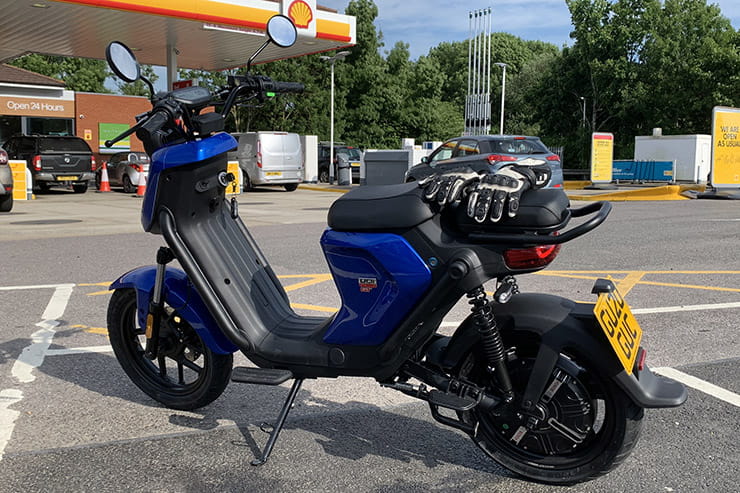 These places are still useful if you need a pee and a sandwich?

Like so many things with this bike, how you view the range and economy depends on whether you are coming at it from a push bike alternative or motorcycling perspective. If you ride everywhere on full throttle you’ll drain the UQi’s battery in 25 miles. For those not wanting to end up pushing it home on the pavement, that means an effective range of around 20 miles – meaning for those with a typical five-mile each-way commute you’ll be charging it every two days.

Be a bit smarter with the throttle and you’ll get 35 miles (30 miles with a safety margin), raising that to a charge every three days.

35 miles to a charge doesn’t seem like much, especially given the size of the battery and the minimal 58kg weight of the UQi. Things don’t look much better when you realise that a full charge takes around seven hours using a domestic 13A socket. Seven hours charging to do 35 miles seems like a lot of hassle.

And then you do the sums and work out that the actual cost of electricity used is less than a penny per mile. That’s pretty much travelling for nothing. If you do 50 miles a week then you could have six weeks of UQi commuting for the same price as a cup of takeaway coffee. Compare that with a petrol-powered scooter that does 100miles per gallon which works out around 5p per mile. Or a small diesel car, doing 50mpg that costs 10p per mile. 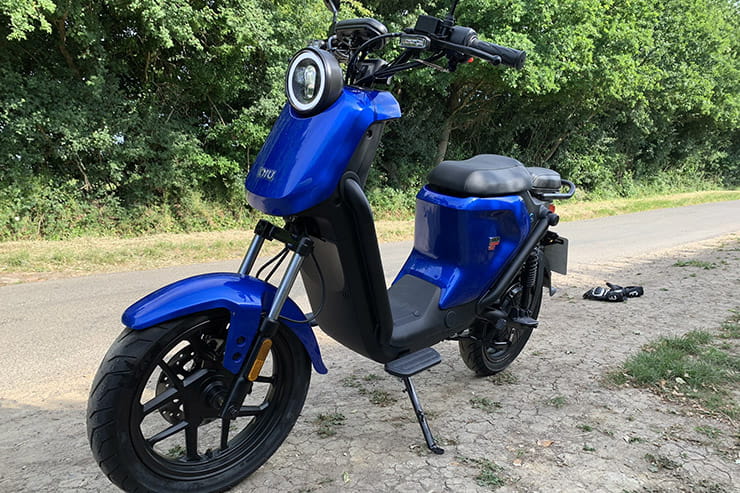 This is a functional machine designed to get you to work or college and back without fuss. So the chassis has to be stable, easy to steer, well-balanced when filtering through small gaps at low speed and have suspension and tyres that soak up the worst of the potholes and are stable when you brake. The NIU UQi does all of the above with ease. The only time it feels unstable is when those of us more used to riding high-powered motorcycles get a bit giddy and try to take a tight, bumpy corner flat out, at which point the short wheelbase, small (for a motorcycle) wheels and tuned-for-commuting suspension roll their metaphorical eyes, do their best to accommodate us, but only so far as we learn not to do it again. 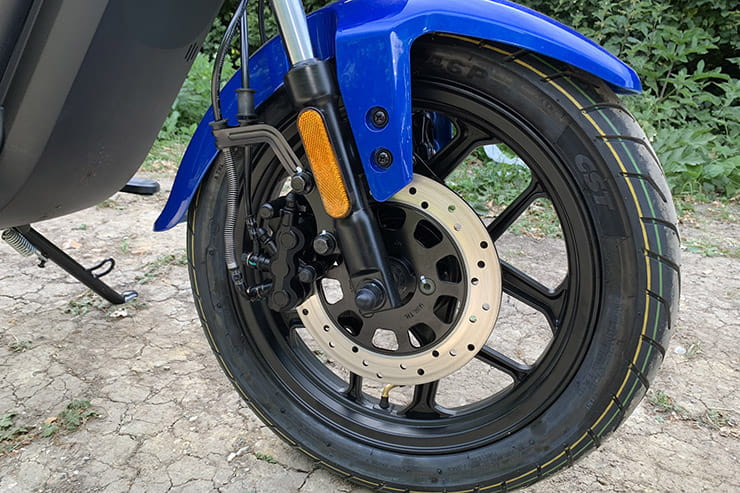 Brakes are linked; right side lever does the front, left lever does back and a bit of front too

Disc brakes front and rear are linked (the RHS lever operates two thirds of the front brake while the LHS lever does the rear brakes and one third of the front too), very powerful when you need to stop quickly, but have enough feel that, in normal use you never even think about it. Despite having a short wheelbase and small wheels the UQi is stable under heavy braking. There’s no ABS fitted, but even when testing the brakes hard I didn’t miss it. 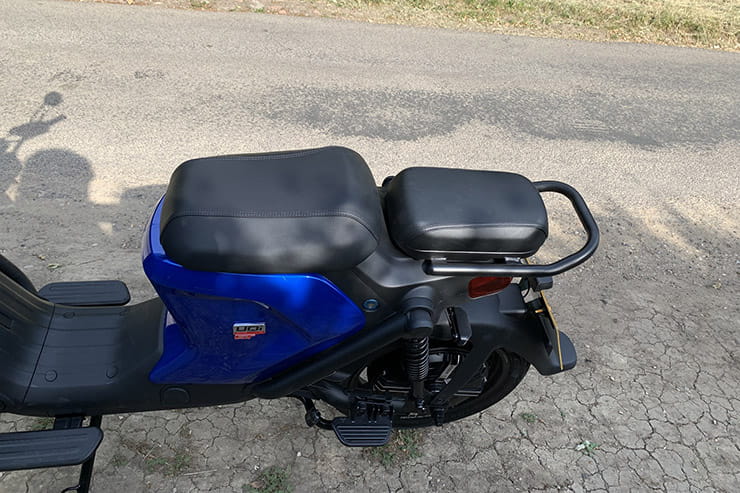 Seat is fine for an hour, pillion pad less so

The riding position feels natural and gives good visibility in traffic. The longest I rode in one go was an hour and the seat was comfy for all that time. The mirrors give a good view of the traffic behind – which is important on a machine where you get ahead quickly and then everything catches you up.

The handlebars are wide enough to make steering easy but not so wide to restrict the gaps in stationary traffic you can sneak through. 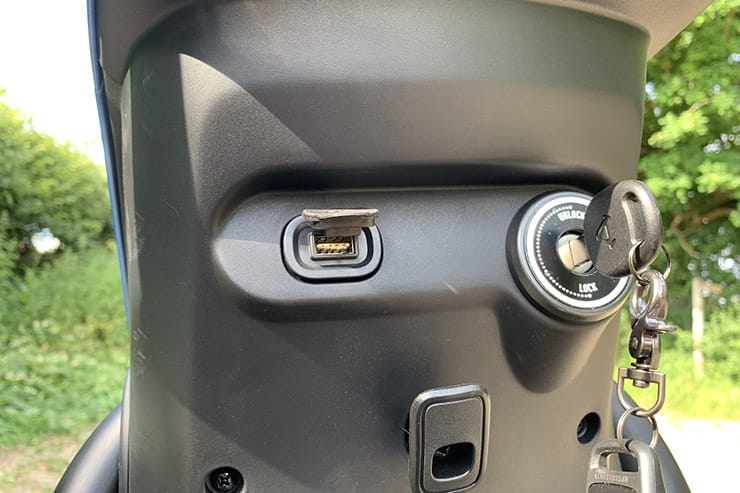 The battery is under the seat and can either be charged in-situ if you have a garage with power or it can be removed to charge indoors. To remove the battery, you disconnect a simple clip and lift. It’s a heavy unit and bulky too meaning there’s a knack to getting it out easily. The 273w charger plugs straight into a household 13A socket and a full charge takes around seven hours. Rather than drain it completely and recharge, I’d probably use it like my phone and top up the charge every night, which will need less time and becomes part of your daily routine.

For those who like to squeeze every last watt out of the battery range there’s an ‘economy’ power mode that lets you limp home slowly if you’re running out of power. There’s also a built-in alarm and immobiliser that you have to de-activate to switch on the power. The alarm is very sensitive to movement around it, which can be frustrating if you park the bike on the street.

If you use the NIU app you’ll have extra theft protection because the bike’s internal GPS unit means you can track it should it be stolen. There’s also a USB port fitted for charging your phone, cruise control and a small hook for hanging a bag of shopping etc. 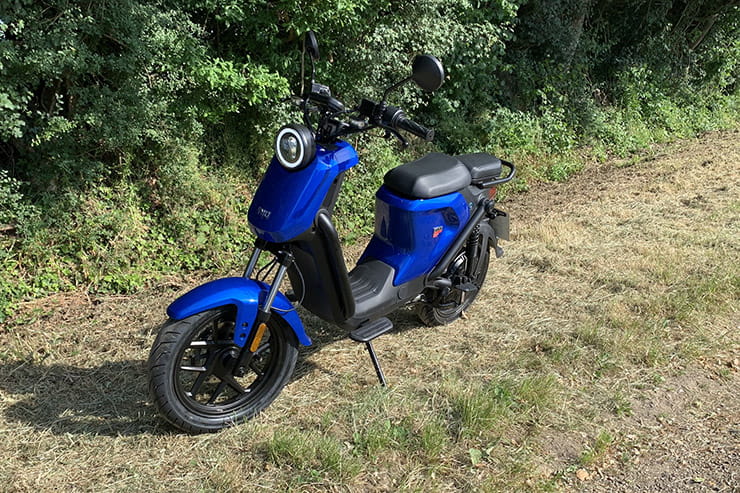 For less than £2k the UQi is exceptional value for commuting

Right now, in the middle of the Covid-19 pandemic, the idea of commuting by public transport seems like the craziest idea ever. All the cost, hassle, delays and frustration as before with the added lottery of who in the carriage has a deadly infectious virus. No thanks.

If your daily commute is 15 miles or less and you are willing to think a bit differently, NIU’s UQi is by far the cheapest way to travel that doesn’t involve the inconvenience and unhygienic bits of cycling. The requirements to ride one (a CBT certificate can be done in a day and you’ll need insurance, a helmet, some waterproof clothing and sturdy gloves and boots) are straightforward and the changes to your quality of life, mental wellbeing and time available to do other stuff than commuting will be life-changing.

There’s never been a better time to do it.

Three things I loved about the 2020 NIU UQi…