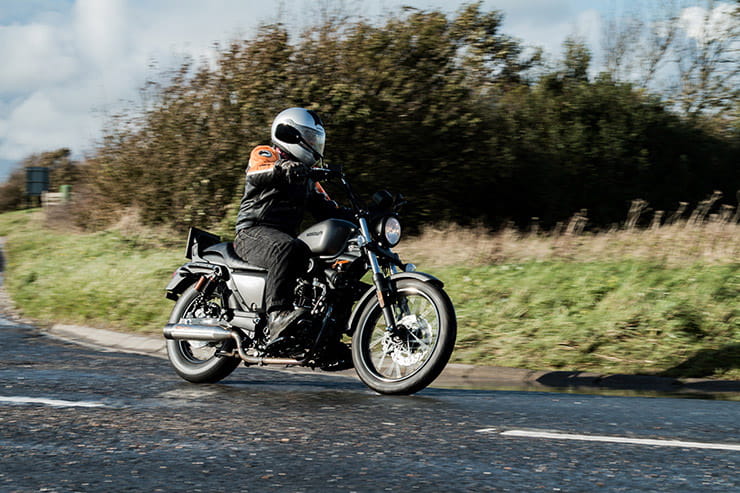 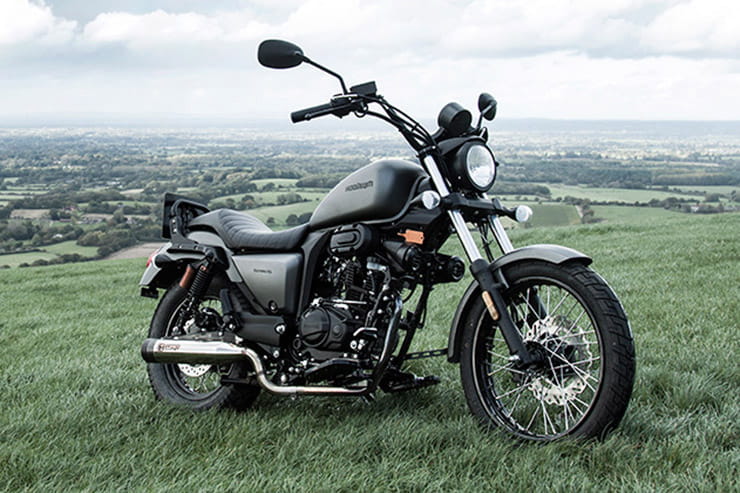 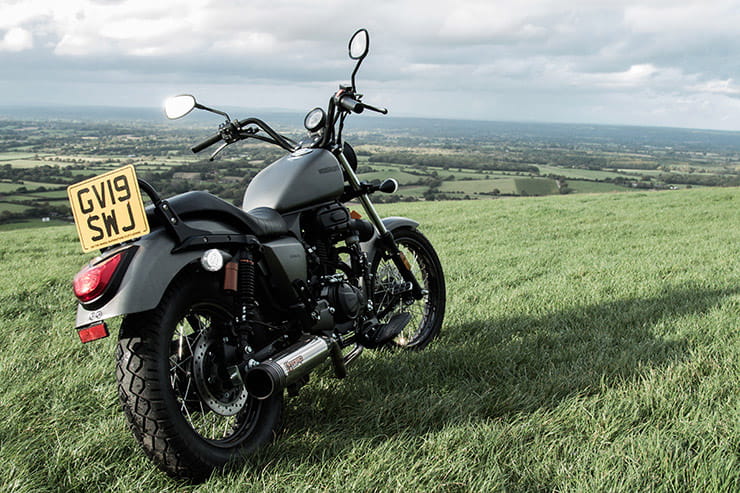 If you're reading this BikeSocial test, you've probably already had a read of my write up of the Hyosung Aquila on the site. Both are 125cc cruisers but from that point onwards they diverge because where the Hyosung is a sophisticated little V-twin with a price tag of over £3600, the Hoodlum has a far more basic spec and costs about £1400 less.

The whole concept of a 125cc cruiser is an odd one but if you want to make a statement with limited funds these bikes have a tad more attitude than the average 125 commuter bike.

That means shamelessly aping the look of a Harley, something the Hoodlum milks for all it’s worth – the high bars, raked out forks and details like the air cleaner box and little hood over the speedo or even the shape of the LED rear light. These are all styling cues which a 17-18-year-old with aspirations to Milwaukee will understand and love. And I have to say, despite being built down to a price around a 125cc single, the little Sinnis makes a good fist of it. Either in Trick Silver or Graphite tinwork with black running gear, or just all-black as on the test bike, it does look the part. In fact, there's not an ounce of chrome anywhere, unless you count the footboard trim and the optional Toro exhaust (the standard one is, yes... black). So the Hoodlum has a bad boy image to suit the bad boy name, but is it as naughty as it would like us to think?

From £2199, the Hoodlum is certainly a whole lot cheaper than the Hyosung (also imported by Sinnis, as it happens) but it's not quite the bargain it seems. Lexmoto, which for years has been price leader in the 125 world, offers the Michigan, which is very similar to the Hoodlum, but comes in a different colour, has alloy wheels and is over £500 cheaper still. Unless you particularly like the all-black Hoodlum, that's a persuasive argument. In fact, there's an even cheaper route to 125cc cruiser ownership with Lexmoto's ZSB at just £1399.99, but that doesn't have the style of these two. 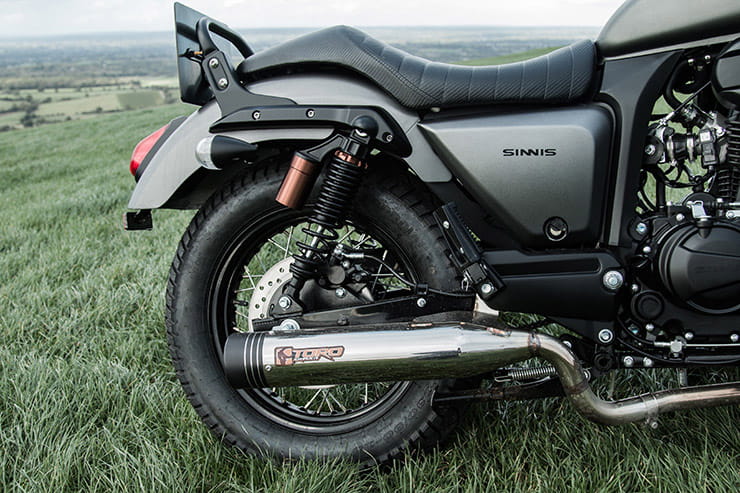 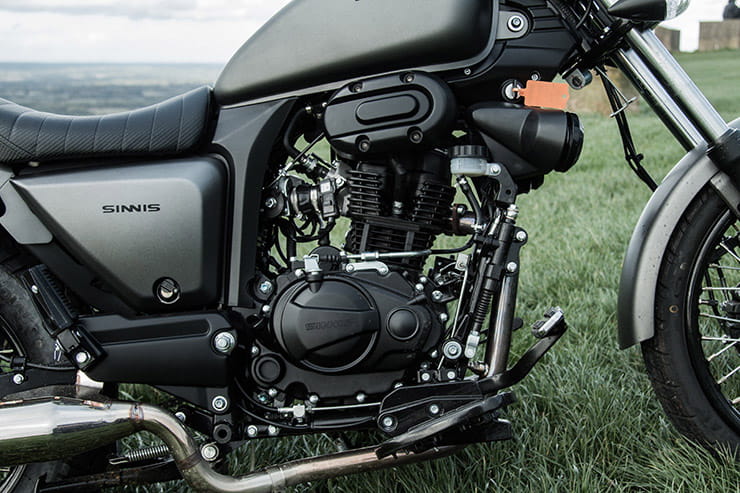 The Hoodlum is a simple 125, so there's not a huge amount in the horsepower department, though at 11.2bhp backed up by 8.8lb ft, it's quite respectable for such a simple engine. The really impressive thing is how well it manages to go on so little. Aided by short gearing, especially in first, the mini cruiser gets away from the line quite well, hitting an indicated 38mph in second, 50 in third, with decent acceleration in fourth up to 65. It'll hold that speed on the flat and add a few more mph downhill.

This is all quite quick for a simple 125, but the test bike sounded even faster thanks to the optional Toro exhaust, which was deafening, especially when holding higher speeds on the A27. Around town it had a nice braap on the overrun and made the motor sound a lot bigger than it really was – fun for the rider, though probably not for anyone else. Otherwise, the Hoodlum was happy to trickle through inner city Brighton at low revs.

When archaeologists dig back down to the remains of early 21st century life, they will find the remains of millions of air-cooled two-valve 125cc engines, which are based on various old Japanese power units for countless numbers of Chinese-made bikes and scooters. The Hoodlum's motor is one of those, with a single overhead cam and no distinguishing features whatsoever. On other hand, just like all the others it's extremely well proven, does the job and spares are cheap. Five-speed gearbox of course (no six-speeds in this price range) and the exhaust we've already talked about. The standard pipe comes in matt black and if the Lexmoto Michigan is any guide, makes the motor whisper quiet. 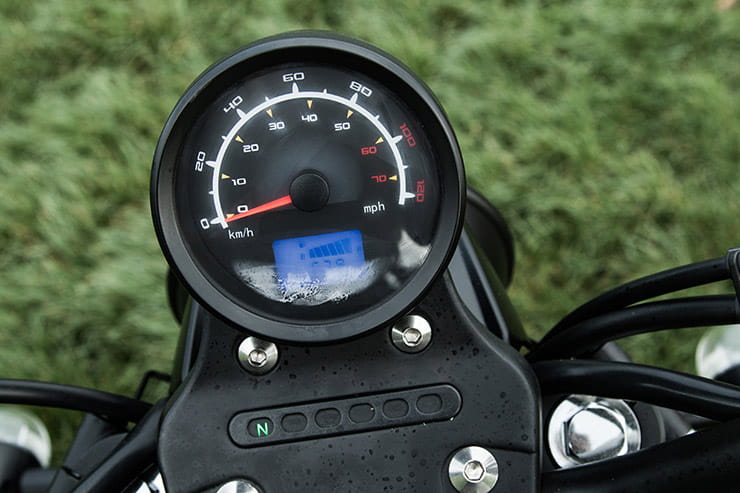 The Hoodlum averaged 81mpg over a mixture of in town riding, keeping up 50-55mph over the South Downs and a bit of dual-carriageway A27. Not as good as the best 125s, but still pretty frugal, and enough for a range of around 220 miles from the 13.5-litre tank.

There is a downside to the cool cruiser looks, as the Hoodlum's raked out forks make the front end feel a bit remote, something underlined by the high, wide bars. They're also soft, and dive noticeably on braking hard, though the Cordial tyres grip OK and the rear shocks do their job. Get used to that, and the Hoodlum handles quite well, with the footboards giving early warning that ground clearance is running low, but you get the feeling you shouldn't really take liberties. Not that this is a heavy bike, and at 135kg the Hoodlum is typically 125 light.

All new 125s without ABS (which means most of them) have to fit linked brakes, and the Hoodlum's work well. The pedal operates both front and rear discs together, which saves thinking about brake balance whether it's wet or dry. As with all linked systems the front lever operates the front disc only, and it needs this as back up on hard stops.

Not everyone likes being laidback, but the Hoodlum's position is pretty comfy. The bars aren't over high and one dividend of the cruiser perch is a nice low seat, so even the short legged can easily have one foot flat on the tarmac. Pillions will be style victims, because the seat looks great but its passenger portion is small and slopes backwards – at least they get a decently big grabrail. Could one do distance on this bike? Stick to back roads and lower speeds (and ask any passengers to ride their own bike) and it would all be quite pleasant. 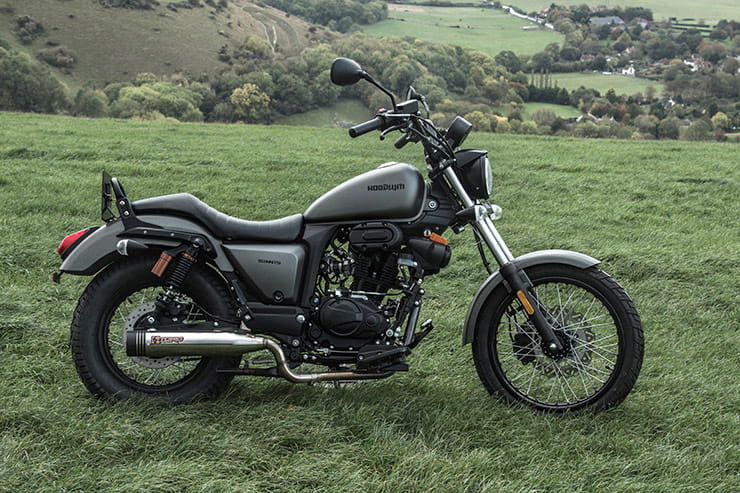 The Hoodlum is not laden with gizmos, though unusually for a cruiser it does have a centre stand. The lone speedo (very Harley Sportster...) has a small digital section showing a tiny fuel gauge and odometer/tripmeter. That's about it, apart from a steering lock and optional leather look panniers and tool roll.

If a low price is your priority, Lexmoto's Michigan offers the same riding experience as the Hoodlum for less money. But the Sinnis does have the looks to back up its bad boy image, and with the optional Toro pipe, sounds like it too.

Three things I loved about the 2020 Sinnis Hoodlum… 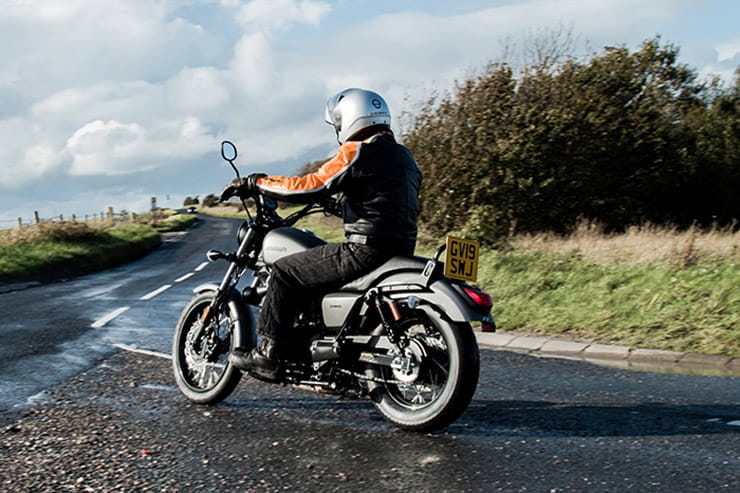 Looking for motorcycle insurance? Get a quote for this motorbike with Bennetts bike insurance
Recommended articles