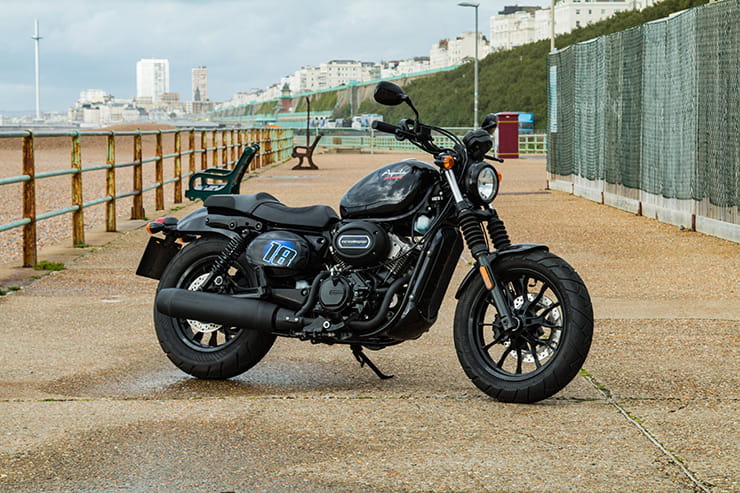 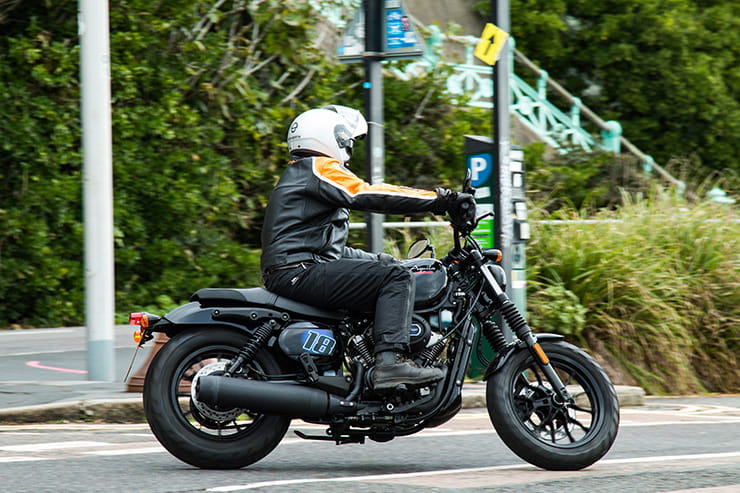 What is it about 125cc cruisers? For whatever reason, the laidback cruiser style has always been a popular one amongst A1 bikes. It seems a bit odd, this aspiration towards kicking out across the Big Sur when your cruising speed is a hardworking, buzzy 55mph. Cruisers do come with a lower seat, which a lot of people like, and they can be a lot more flash than the typical geared commuter bike. Manufacturers must like them too – it doesn't take much to dress up a basic commuter as something more laidback. Build it around bargain basement mechanicals and it won't cost much more than one of those either – Lexmoto's cheapest 125 cruiser comes in at just £1399.99.

The Hyosung Aquila 125 isn't one of those. From the liquid-cooled V-twin to the fat front tyre, replete with attention to styling detail, this is one sophisticated 125, and that's reflected in the price. Its predecessor was a V-twin too, but an air-cooled job which owed at least something to (if you can remember it) Yamaha's Virago 125. That cost £2699, but the 2020 sophisticate comes in at £3649 – this is not your typical bargain basement 125.

If there's one thing that justifies the spec (apart from the upmarket engine) it's the styling. Someone has really made an effort to make this 125 look bigger than it really is, and they've succeeded. It looks chunky, substantial, and the low rider/bobber styling works well. Fat tyres, low seat, wide bars – all cruiser clichés, but they work, backed up by finned heads, while the slim radiator is well hidden behind a grille. Top marks for styling then.

Hyosung isn't one of the best-known brands on the roads, but this Korean concern is a manufacturing giant, with fingers in all sorts of pies from textiles to solar panels. It's never really taken off in the UK motorcycle market, but that's something Brighton-based importer Sinnis is hoping to change. It's just taken over the Hyosung brand and reckons the Aquila will find its own niche as a premium 125.

At £3649, the Aquila is the priciest 125cc cruiser on the market. Closest is the AJS Highway Star at a whisker under £3000, also the only other twin. All the others are several hundred quid cheaper, but they're all singles so lose out on some of the cruiser cache. Sinnis' own Hoodlum is £2199, and there's the Keeway K Light (£2099) and UM Renegade (£2099 upwards). As ever, Lexmoto undercuts everyone else, starting with the bargain basement ZSB and ending with the Michigan (which we've tested) at £1649. Of this lot, the Hyosung is the only V-twin, but does that justify its premium price? Read on... 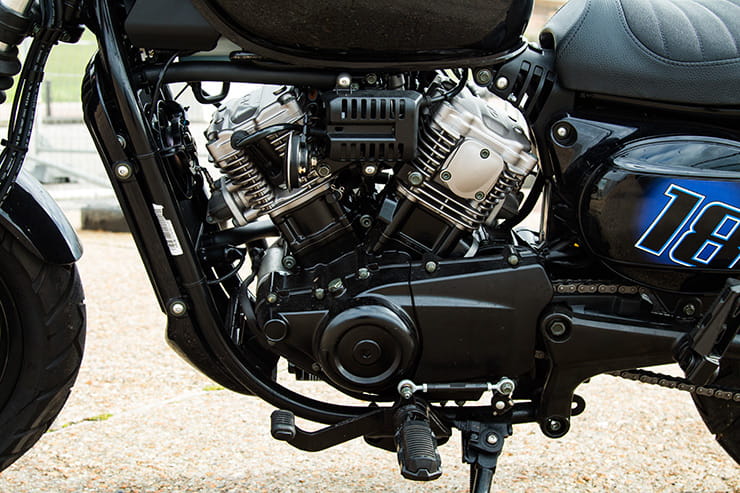 To qualify for the A1 category, you can only ride a 125cc and at 14bhp the Aquila is right up there among its rivals. That gives it a distinct advantage, because many of the cheaper 125s have a lot less power, and in this company, a couple of horsepower here or there makes all the difference.

I thought the cheaper and lower tech Sinnis Hoodlum felt slightly faster, but either way the Aquila is acceptably quick for a 125. it goes well enough through the gear and right up to the 10,000rpm on the analogue rev counter's red line. By then, vibes are coming through the seat and bars to let you know the little motor is working hard, but you don't lose much by changing up earlier. Do that, and the Hyosung will keep up 45-55mph up hill, down dale without a problem, shifting to fourth, and occasionally third in the five-speed box to keep up progress on hills – the change is nice and light, so no problem there.

Small bikes can feel breathless on fast main roads, but this one will hold a flat out cruising speed of 60-65mph, which is enough to keep ahead of most HGVs. With the help of a good downhill stretch (the A27 outside Brighton is fearsome hilly...) it did touch 74mph, on the rev limiter in top, but it won't keep that up without a lot of help from gravity. In town, the tiny V-twin is very tractable, happy to pull from just 2000rpm (14mph in top, 11mph in fourth, so you can keep cyclists company and not annoy anyone).

It's hard for manufacturers of 125s. When every engine is limited to 14.6bhp to fit into the A1 class, making your engine appear different can be a struggle. The good news is that Hyosung have used the Aquila's higher price to pay for a top spec motor. Not only is this a V-twin (unique in its class now), but it's liquid-cooled, with double overhead cams and three valves per cylinder. And fuel injected. And it meets not only Euro 4 emissions laws but the upcoming Euro 5, so it's about as up to the minute as a 125 can be.

True, there are only five gears rather than six, but that would be overkill, I think. The clutch was surprisingly heavy for a 125, but maybe that's all part of the big twin aspiration. As for the exhaust, it's a two-into-one matt black job of unprepossessing appearance – come on guys, if you want it to look like a Harley Sportster, it's got to be a staggered two-into-two in satin. 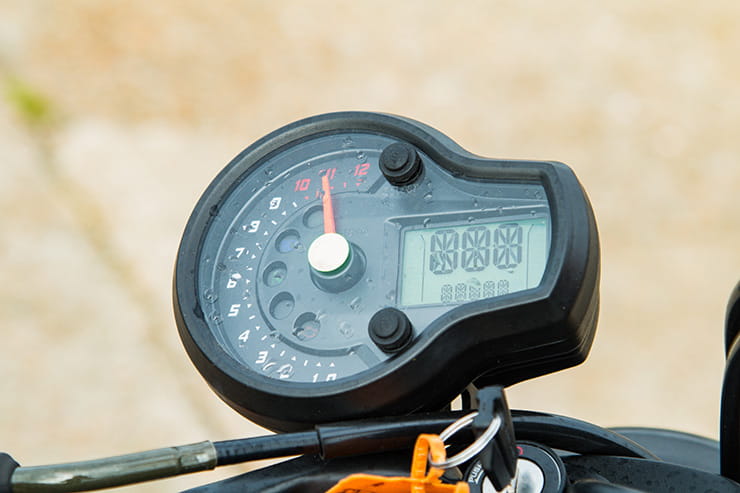 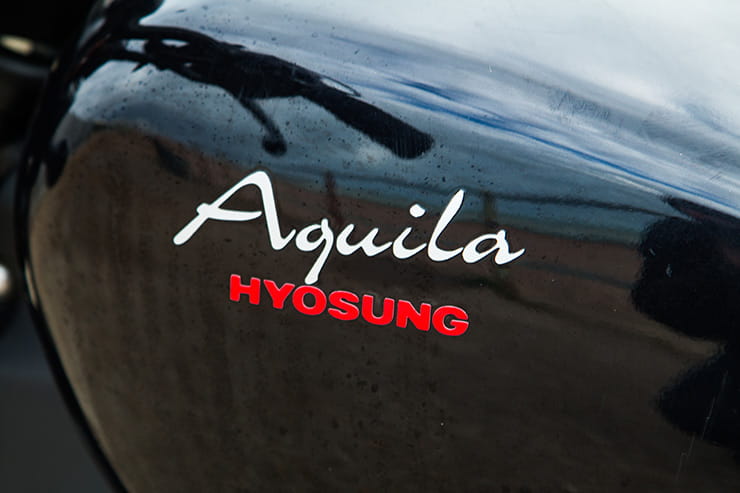 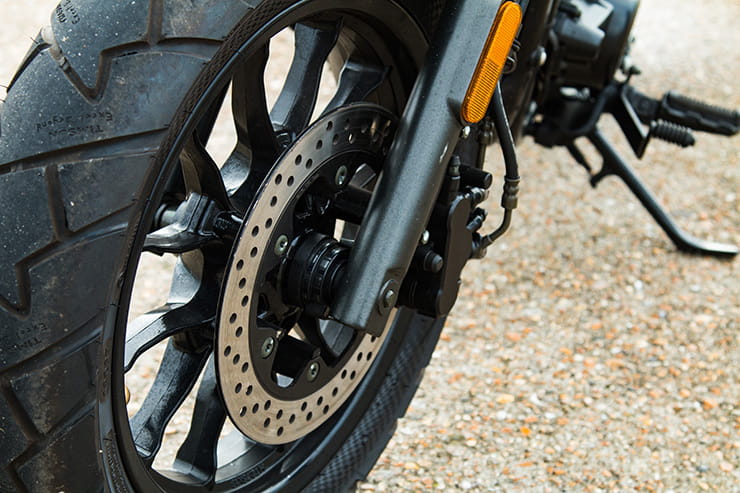 I've said it before, but geared 125s are the usually most fuel-efficient vehicles on the roads, better than low-emission hatchbacks and clever-clever hybrids, as most of them can manage 90mpg or more. The Aquila wasn't as good as some, averaging 75mpg on a mix of town running, riding flat out on the A27 and some spirited riding over the Sussex Downs.  Gentler use would of course give more miles, and as it is the 12-litre tank should give nearly 200 miles of commuting.

If you're no fan of cruisers, you might think the Aquila, with its fat tyres and low ground clearance has all the makings of a scrappy, wallowy whale of a bike, but it actually handles pretty well. Heels on the pegs will touch down, but that's not a big problem, and the pegs do fold. The forks are well damped and the gas shocks, with five-position pre-load adjustment, do a good job. The tyres are Timsums, and the front 120/80 on a 16-inch rim does make the steering a little heavier than normal, but it didn't bother me. Both tyres also have 'Excel Beyond' moulded into them. Beyond what? Woking? Waterloo? They hold on well anyway, which is what counts.

Unlike bigger bikes, 125s aren't obliged to have ABS, but they must have linked brakes, and the Aquila's are good. Befitting the price, the front disc is floating with a three-pot caliper, and pressing the pedal gives an immediate response from both ends, though they are progressive with it. The rear will lock up on hard stops in the wet, and there was plenty of that on test day.

Cruisers look really comfy, but this doesn't always work out in practice. The Aquila suits long arms and short legs – even my stubby 30inch pins were bent at an acute angle, so the longer-legged should look elsewhere. At least the seat is only 710mm off the ground, another boon for short arses. Oh, and the air cleaner digs into the right knee, which might be taking the Harley aspirations a bit too far. I know no one will really attempt a nationwide tour on one of these bikes (standby, online forums) but it's worth saying. Pillions get proper pegs and a decently flat portion of seat, though no grab rail – worth paying extra for one of those if you take a passenger regularly.

Switch on and a 'Get Ready' message appears on the dash. The latter is quite comprehensive, with an analogue rev counter, digital speedo, fuel and temp gauges, clock, odometer and two trips. You can even dim the display at night, which is a neat touch, so it's a pity the warning lights are too small and dim to grab your attention in daylight. No complaints about the standard issue switchgear, but the mirrors are too short so it's elbows in if you want to see what's going on directly behind you. 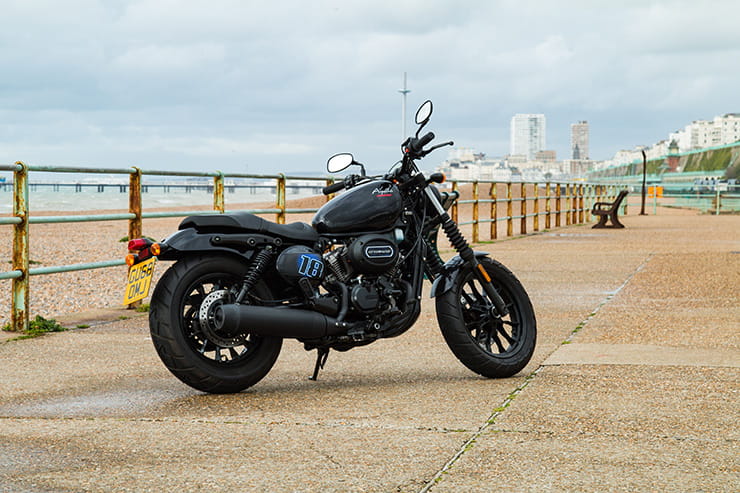 The Aquila does make a good fist of justifying its high price – it feels like a quality machine and being a V-twin gives it extra cruiser kudos, especially when no other 125 offers one. Dynamically, the offering is little different to the cheaper rivals, but the styling is spot on, which might be enough to sway it for you.