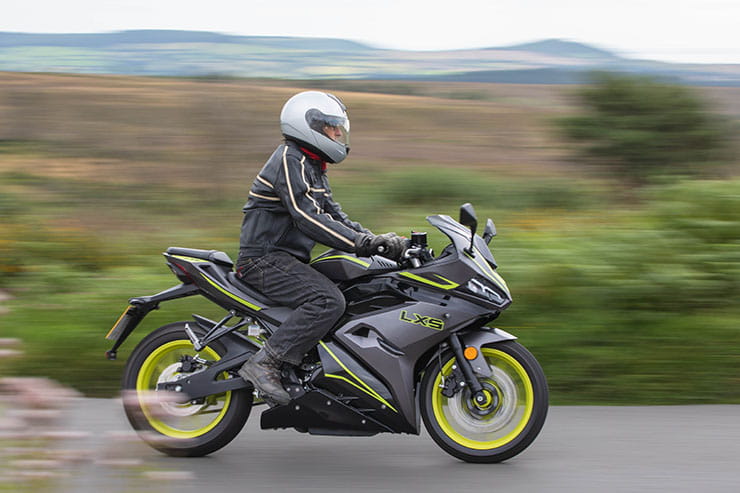 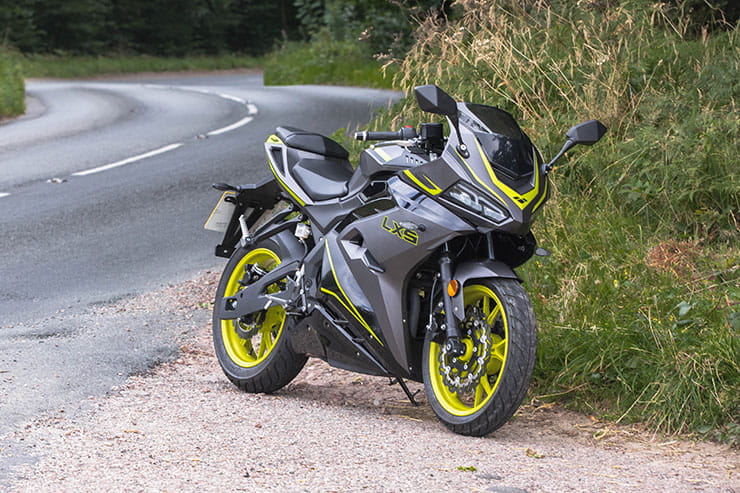 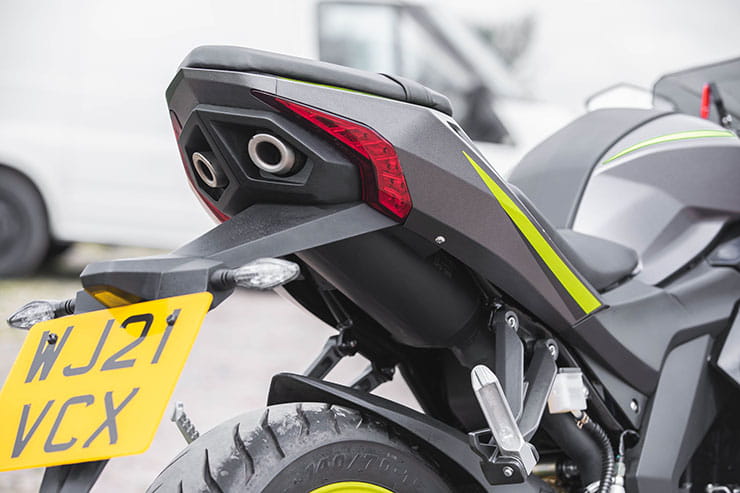 Imagine you're importing one of the UK's top-selling 125cc sports bikes. All good, except that competition is as close as ever and your bike has been around for three years. Do you replace it or update it?

If you're Lexmoto, you do both. The LXR 125 mini-sports bike has been updated to Euro 5 spec, but they've also unveiled the new LXS. Superficially similar to the LXR (which is still available) it's lighter and more compact, with smaller 16-inch wheels. Crucially for bragging rights among 125s, it's also got underseat exhausts and power is increased to 10.3Kw (13.8bhp) which you probably don't need telling is not far off the A1 class limit. Is that enough to put it at the top of the tree? 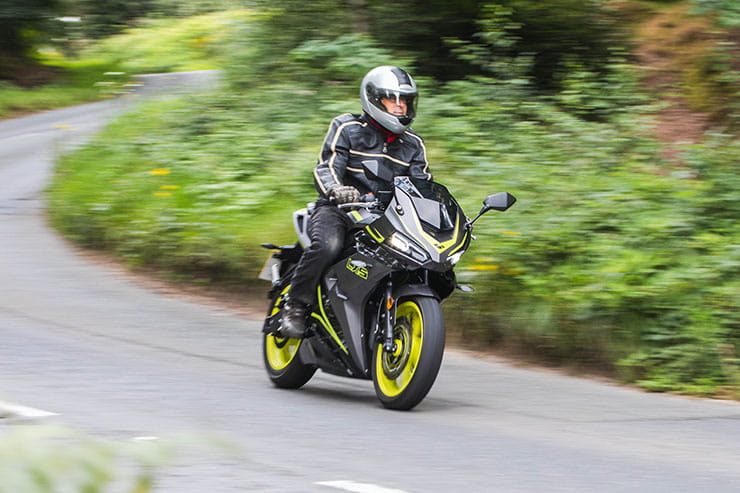 Fire up the LXS, and the 125cc liquid-cooled motor sounds quiet and innocuous – if it's not raucous enough, Lexmoto's Lextek accessory arm will be offering alternative pipes as an accessory later in 2021.

But get on the move, and it all feels a bit uncivilised. The engine buzzes and vibrates at lower speeds, the mirrors blur and there's a surprising amount of noise reflected back from the fairing. It's easy enough to ride through town and past queues, and the LXS will even trickle through the traffic at 25-30mph in sixth (though I can't see any self-respecting 18-year-old doing that). But really, although this is just a 125, you get the feeling it would much rather be out on the open road.

Once out of the 30 limit, knock it back a couple of gears (or three, if you've been trundling in top) and that's exactly what it is. The LXS still isn't fast, though it's certainly respectable by 125 standards and close ratios in the six-speed box enable you to make the most of that 13.8bhp, chasing up to the 10,000rpm red line. The extra power over mainstream 125s tells as the bike accelerates past an indicated 60...65....to top out at 73-74mph on the flat. It's happy to keep up 65-70 on the speedo (though long hills will knock the speed back) so the LXS is fast enough for dual-carriageways and motorways, though the outside lane of the M6 might be pushing things a bit.

The good news is that the faster you go, the smoother the LXS gets, happy at that 65mph – even the mirrors de-blur. 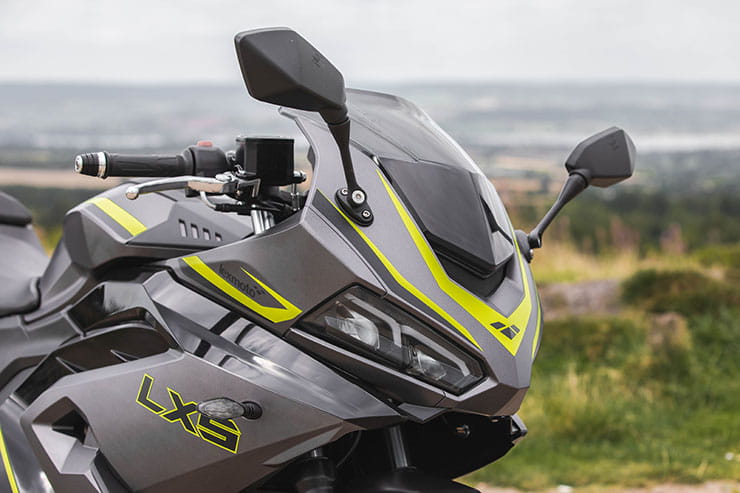 At this price, you don't get twin overhead cams and four valves, but the LXS's SOHC two-valve motor is otherwise up to the minute, liquid-cooled and to Euro 5 spec. It's actually shared with the LXR, though power is boosted from 9.3Kw to 10.3Kw (13.8bhp) at 8750rpm, with a torque peak of 11.0Nm at 6750rpm. Mini-sports bikes need a six-speed transmission to be credible, and the LXS has one – it's slick and easy to use.

We didn't have time to give the LXS a proper economy test, but geared 125s are traditionally the most economical fossil-fuelled vehicles on the road. This one shouldn't be any different – Lexmoto claims 87mpg – and 80-90mpg should be possible round town and over 100mpg given steadier riding in the suburbs. At 10 litres, the fuel tank should be big enough for an easy 150 miles, which is a week's-worth of commuting for many. 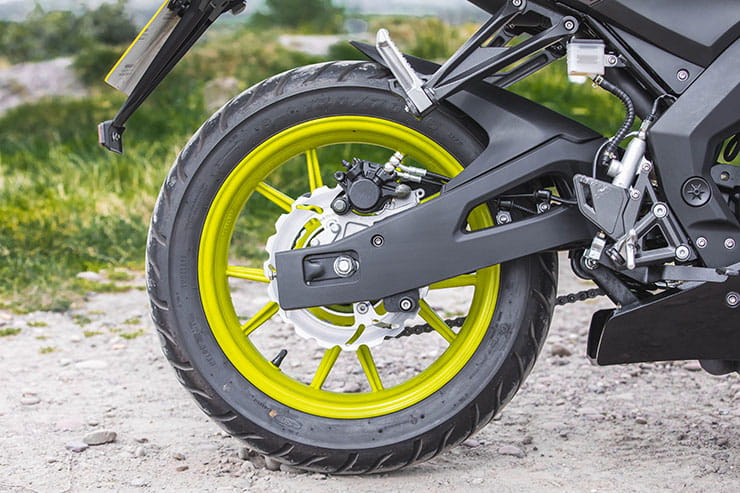 Same story as the engine and transmission. The LXS is a budget sports bike compared to some, so you don't get an alloy frame or swinging arm, top-brand tyres or adjustable front forks. Actually, Lexmoto does its best by disguising the steel frame and swinging arm with plastic covers which could fool you into thinking that they really are alloy. That's if you squint a bit, in half-light, from a distance. They look pretty chunky anyway.

Still, the proof of the pudding is how the LXS actually handles, and the news is good. Not only is it rock solid at top speed, but the Cheng Shin tyres (they own Maxxis too) cling on well (to dry tarmac at least) with no slippy moments.

The USD forks are none the worse for being non-adjustable (be honest, how many of us actually adjust our forks to get nth degree of rebound?) and always feel fine, in control and with no excessive dive on heavy braking. It's the same story with the single rear shock, though the pre-load adjustment does look like a pig to get to.

The LXS is 12kg lighter than the LXR – that's still not as featherweight as the Suzuki GSX-R (134kg) but it's enough to make the bike flickable and quick steering. It doesn't feel overweight. 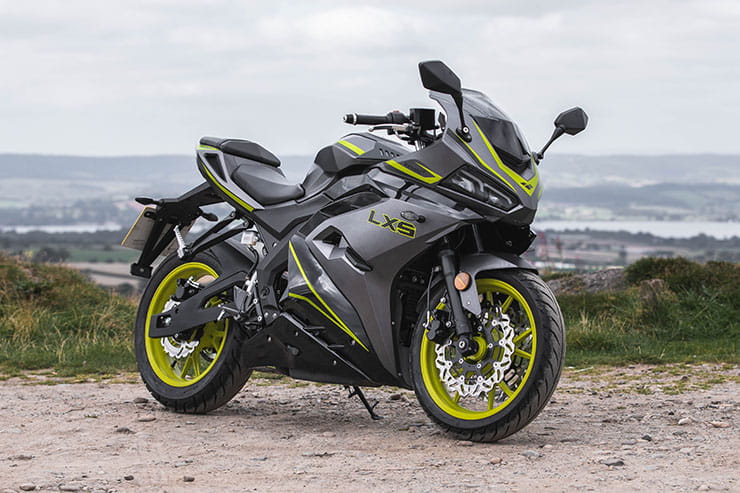 This starting to sound like a broken record, but at Lexmoto prices you don't get all the features of bikes costing a lot more. Hence no ABS on the brakes, but there are twin front discs (unusual on a 125). Like all other non-ABS 125s, the brakes are linked via the foot pedal, and nicely progressive they are too. Strangely, the handlebar lever needs a good squeeze to get those twin front discs working for a hard stop.

The LXS's sports bike looks might promise a head down riding position, but that's not what you get. The bars are pulled back to give a quasi-upright, quite comfy riding perch, at least for me at 5'6” – six-footers might find their legs a bit tight on space, but it's pretty good and the small screen does a good job of keeping the worst of the wind off at speed. Of course, this is supposed to be a sports bike, so pillions are perched up on a little square of seat with not much to hang on to. 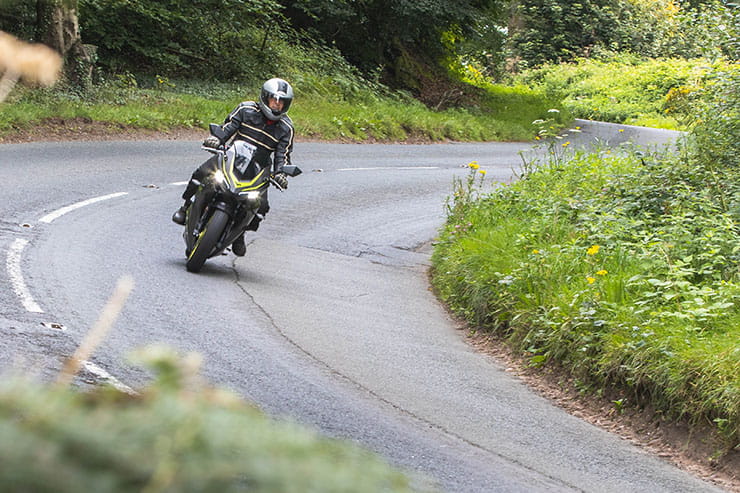 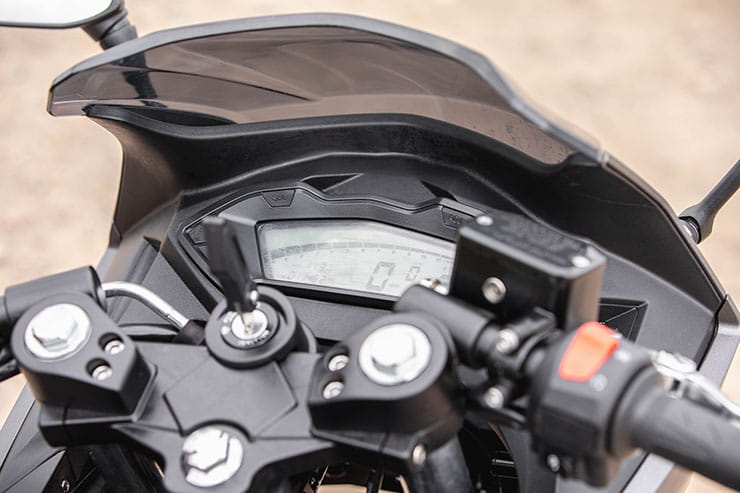 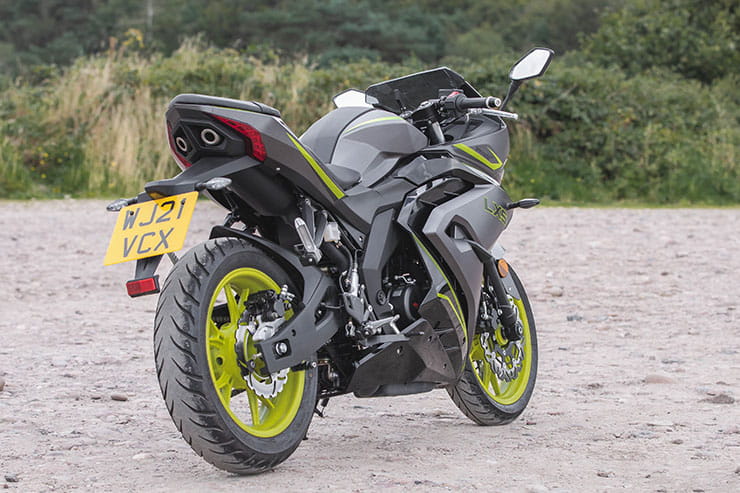 Rider aids? Well there are precious few of those – no ABS or riding modes – though on a mid-priced 125 it's unfair to expect them. Given how stealable these smaller bikes are, I'd like to see the security app which Lexmoto (and others) offers on scooters now, and it wouldn't add that much to the price.

Really, the rider 'aids' are visual – those underseat pipes and an in your face colour scheme featuring flouro wheels. If those colours are a little too strong for early morning starts, there's a more sober black/blue alternative. The dash is easy to read, with speed, revs and fuel plus volts, a clock and a gear indicator.

You can see why Lexmoto's LXR has been a good seller, and the LXS offers much the same package – it may not have the brand name and ultimate goodie bag of big-name rivals, but it costs up to £2000 less, goes well and really looks the business. We think it'll carry on in the same vein as the LXR. 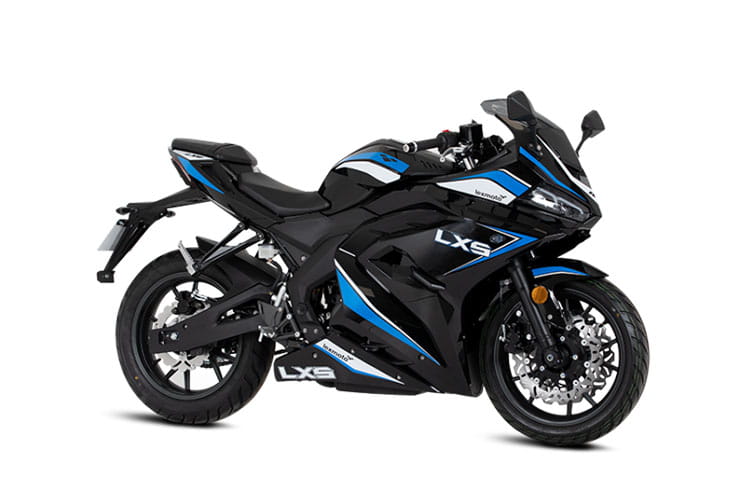 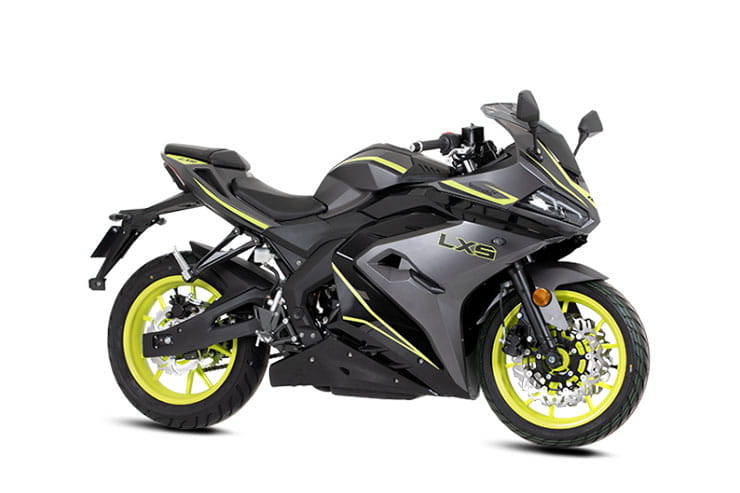