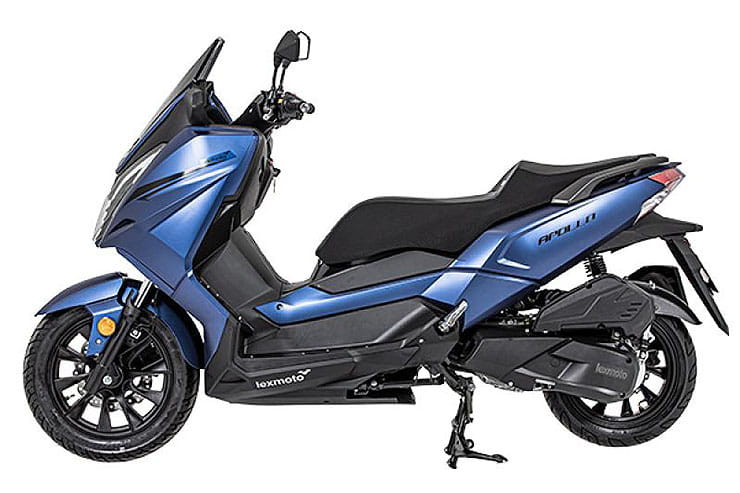 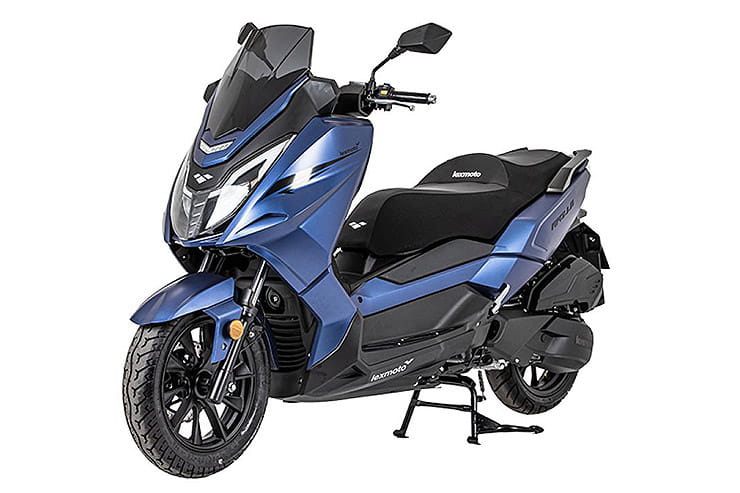 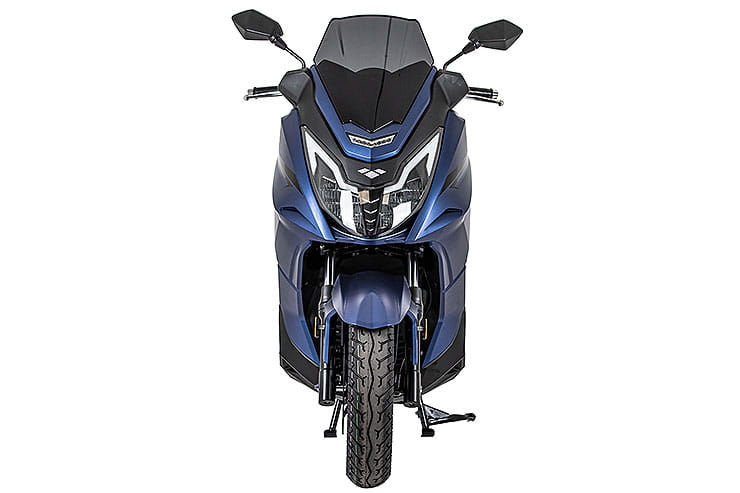 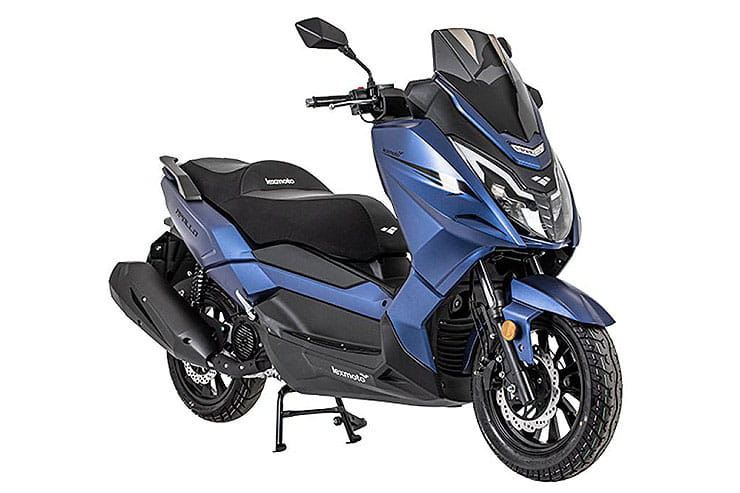 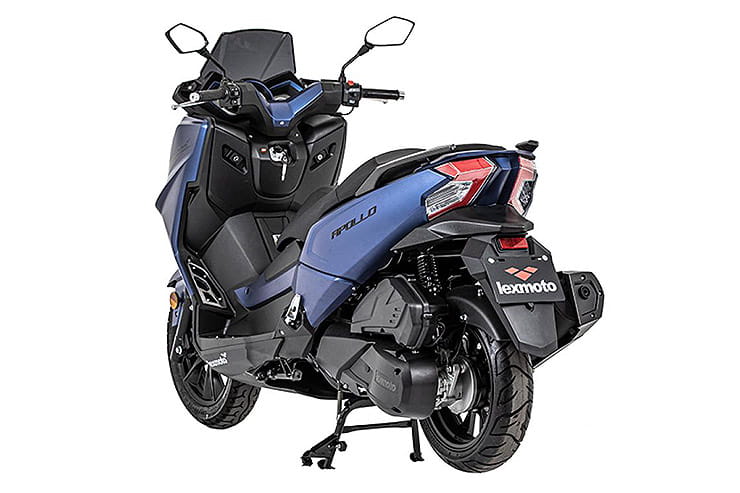 Maxi-scooters make a lot of sense for longer commutes. With a long wheelbase and stretched out feet first riding position, they're generally comfier than the average short and stubby scooter. They also tend to have bigger motors, but some are offered as a 125, and the Lexmoto Apollo is one such machine. It looks far classier and less garish than Lexmoto's previous maxi 125, the Chieftain, and is one step up from the smaller Aura (review coming soon). So is the Apollo a comfy, sophisticated 125 with the style and space of a bigger scooter, or is it all mouth and trousers? 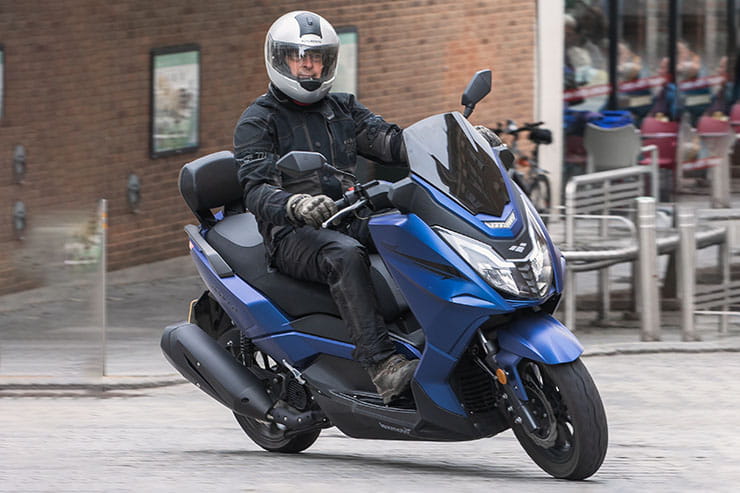 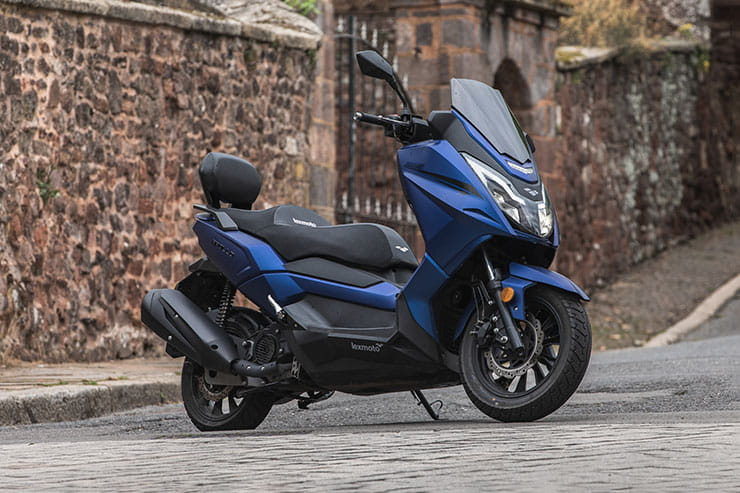 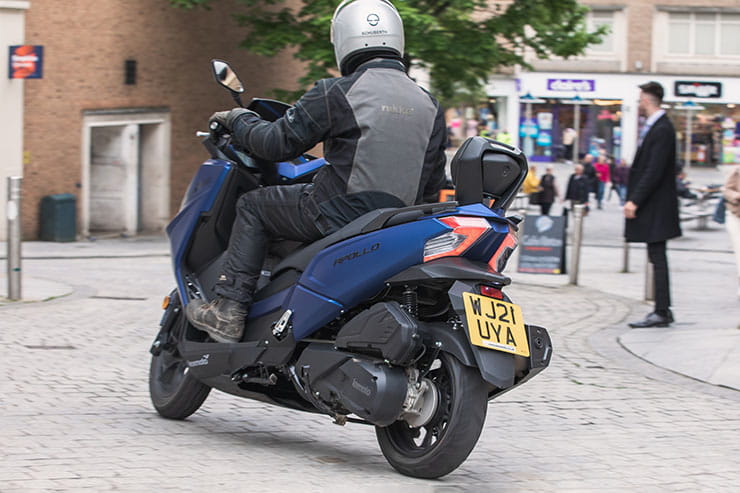 At £2500, the Apollo is Lexmoto's most expensive 125cc scooter, costing £100 more than the Aura, while the entry level Enigma is £1000 less. But let's not lose our perspective – Lexmoto always prides itself on good value and the Apollo's big-name rivals are all upwards of £3000. The Yamaha N-Max for example, starts at £3400. The Apollo might be pricey in Lexmoto terms, but it's still very good value. And if that's still too much to pay upfront, the importer offers a finance deal of £100 deposit plus a gnat's whisker less than £50 a month for five years, which works out at 8.9% APR. It’s available in the blue you see here, or red.

You might expect a scooter this big with a puny 125cc motor to offer feeble performance. It certainly has to work hard to push the Apollo along, but it's a willing little thing, getting the scooter up to an indicated 40-45mph on the big analogue speedo reasonably quickly. It's certainly fast enough for urban traffic, getting away from the lights OK, which is just what you want after filtering to the front of the queue. Out of town, things slow down a bit, though the speedo needle will climb to 60-65mph given a little more time, and even touch 70mph with a following wind. Ride any 125 out of town for a while, and you discover that wind direction really matters... Anyway, the important thing is that the Apollo can easily manage a 55-60mph cruise, so it should just about cope with motorways if you keep away from the outside lane. 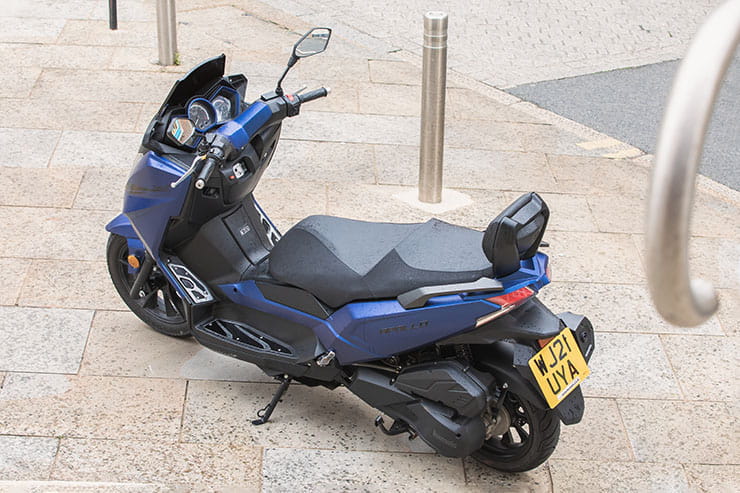 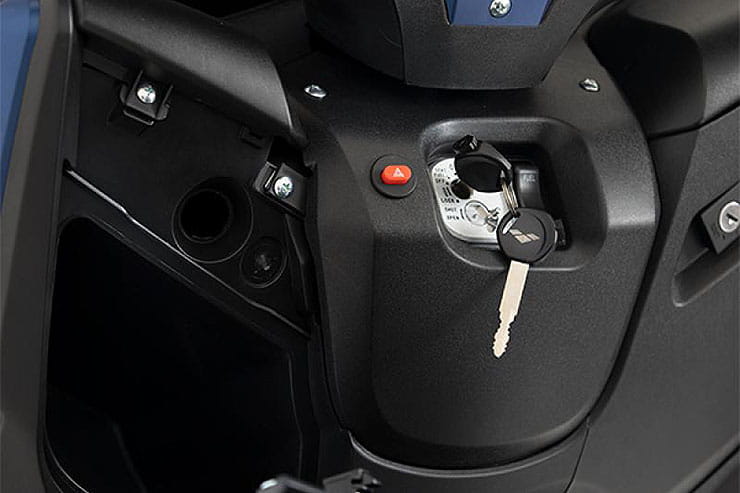 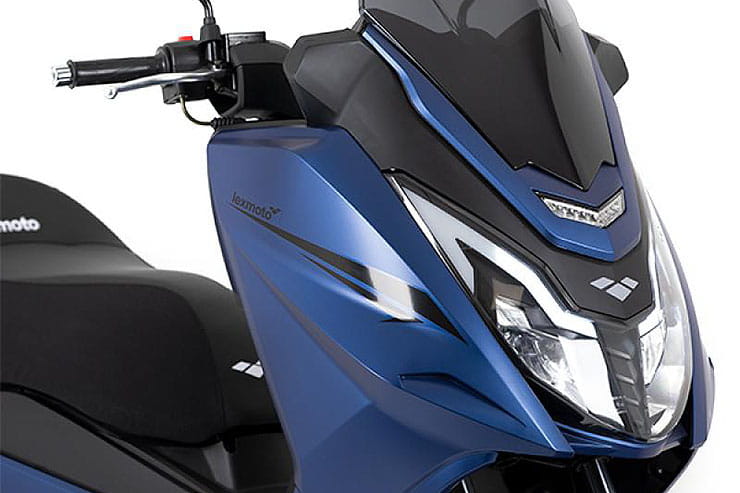 Generally, the more you pay for a 125cc scooter, the more power you get, up to the A1 class limit of 11Kw (14.3bhp). Being at the budget end of the maxi market, the Apollo doesn't come close to that, and Lexmoto claims just 8.7bhp at 7260rpm. It's a simple engine, fuel-injected and up to Euro 5 standards, but air-cooled (not liquid) and with just two valves rather than four, but as noted above it does the job surprisingly well. Transmission is the usual fully automatic expanding pulleys, and is unobtrusively efficient, which is the whole point of a twist and go.

Most 125cc scooters give miles per gallon in the nineties, but the Apollo's big selling point here is it's 13-litre tank, which is generosity itself in this class. Assume a steady 95mpg (which not all riders will get of course) and the scooter should manage close to 250 miles before filling up – that's a fortnight's commuting for a lot of us.

At this price, you don't get high quality adjustable forks and shocks, but the Apollo has several basic points in its favour when it comes to handling. At 146kg, it's heavier than smaller-bodied 125s, though not by a huge amount. Its real advantage lies in its long wheelbase and bigger wheels, with a 14-inch front and 13-inch rear. This makes the Apollo very stable at speed and through corners – it feels reassuring, which is a real bonus for all-year round commuter transport. The CST tyres grip well, and the twin rear shocks (with the usual five-position pre-load adjustment) should cope with all sorts of loads. At the same time, it feels slim and small enough to filter through traffic, well balanced at low speed and without the width of a bigger scooter. 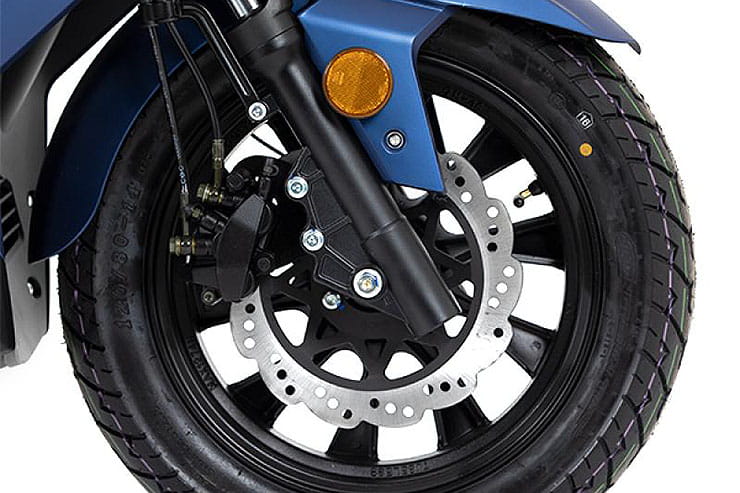 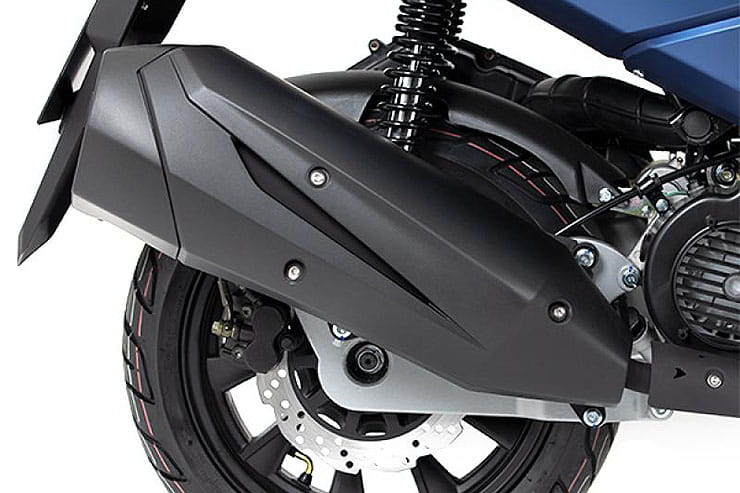 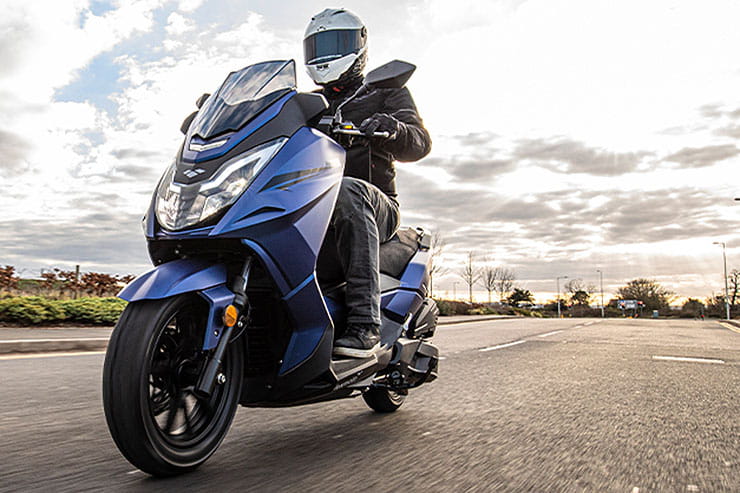 Yamaha's N-Max might offer standard ABS but the Apollo doesn't, though given its price that's hardly a surprise. Instead, you get the usual set up of a single disc at each end, the left-hand bar lever controlling the linked system. The rear did lock up on a wet road, but the brakes are fine for the Apollo's performance.

More bonus points here. I've always liked the feet forward position of maxi-scooters, and the Apollo offers just that. One taller rider thought it lacked legroom, but at 5'6” I found it fine. The seat is comfy with good lower back support and while the screen looks low it actually gives decent protection at speed, with no buffeting. There's plenty of space for a pillion as well, with fold-out foot pegs and a decent grabrail. In fact, the only downside to the Apollo's riding perch is that the wide 780mm seat had my 30-inch legs on tiptoe. A lot of scooters are like that.

As a transport tool, the Apollo has plenty of plus points. There's a comprehensive dash with big analogue speedo and rev counter along with digital fuel gauge, voltmeter and clock. Luggage room is pretty good too – easily enough underseat space for a full-face helmet plus two lockable cubbies up front (albeit with flimsy lids), one of which has a USB point. If you need more space, there are various top boxes on offer. 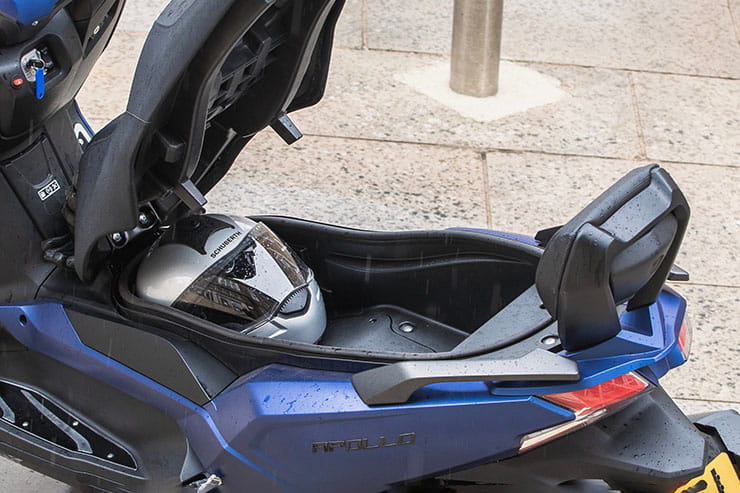 I was impressed with the Apollo. It really has got the space and comfort of a bigger scooter combined with the lower price and running costs of a 125. If you can live without the comfiness and accoutrements, there are far cheaper 125s, and if you have an A2 licence then a bigger scooter will keep ahead of the traffic more easily. Otherwise, for longer commutes and the odd two-up trip, it's a good buy. Better still, I've got through this test without making any lame jokes about rockets... 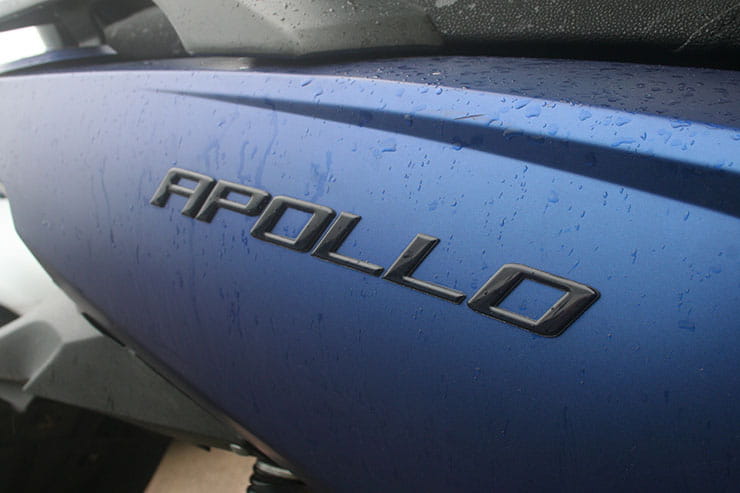