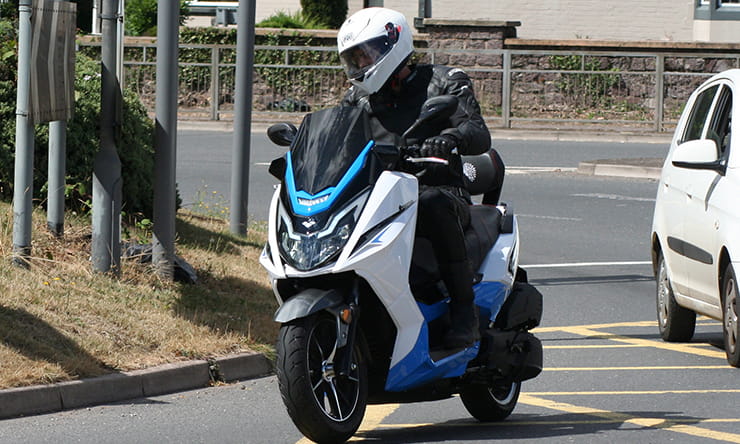 This is the cheapest maxi-scooter you can buy, and that's what you would expect from Lexmoto, the best-selling Chinese brand of them all. The Chieftain (named after the Exeter Chiefs rugby team) is its first tilt at the maxi-scooter market. ‘Maxis’ have a longer wheelbase than traditional scoots, giving the rider more space to stretch out plus extra luggage and pillion space – that's the theory. 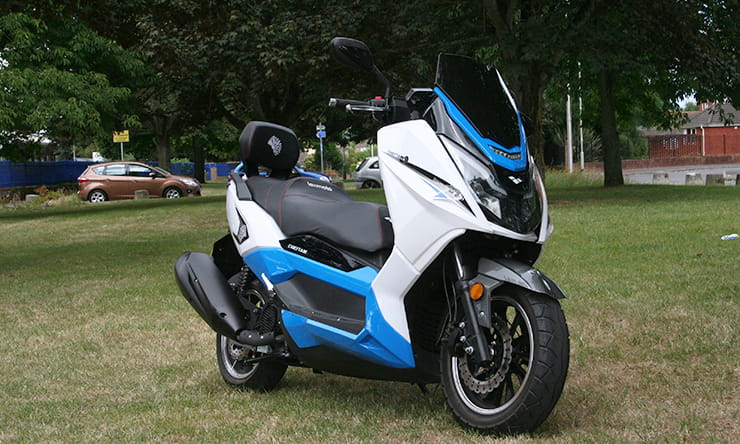 There's a puzzling thing here. This is Lexmoto's most expensive, flagship scooter, and at 146kg it weighs more than the average small 125 scooter. Yet they've given it a fairly basic engine which doesn't produce much power. Acceleration is acceptable in town, but lags behind some 125cc scooters. The Chieftain will wind up to an indicated 55-65mph on the flat, but the engine's clearly working hard most of the time. It's actually typical budget 125 performance, but we'd expect more from a supposedly upmarket bike. 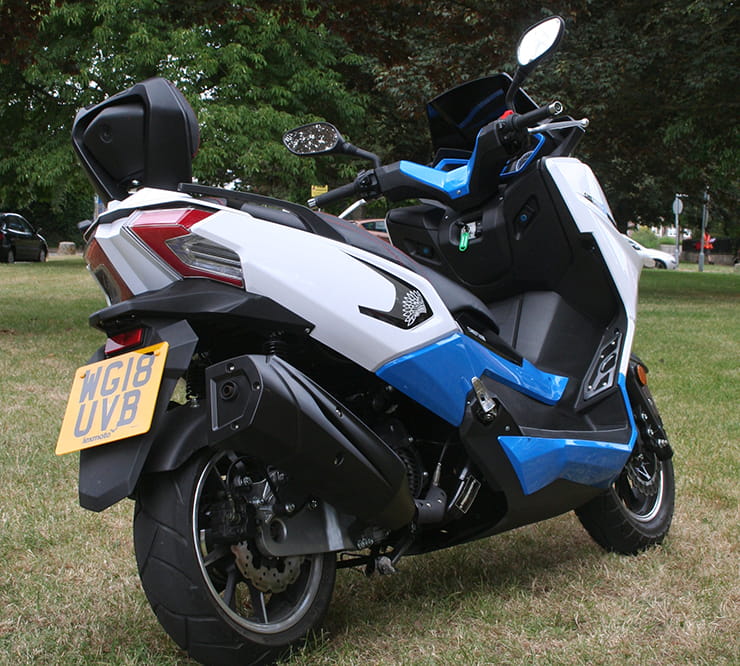 As a budget scooter, the Chieftain has a budget engine, and Lexmoto says a more potent power unit would add too much to the price, which is clearly a selling point. As it is, the scooter's motor is a simple fan-cooled two-valve unit offering 7.7bhp at 7300rpm – by comparison a Honda PCX has 11.7bhp.  It is fuel injected, but so are all other new 125s now, to pass Euro 4 emissions regulations. At least the twist & go transmission works well, so it's an easy two-wheeler to ride. 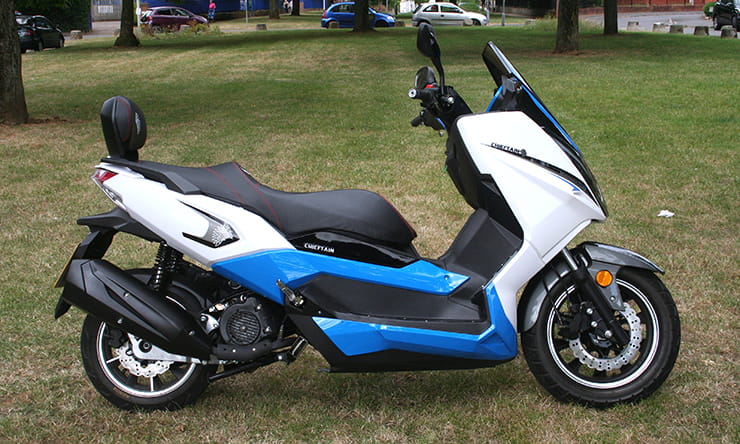 We don't have official fuel figures for the Chieftain, but most 125cc scooters can average 90-100mpg if not ridden flat out all the time. The Lexmoto should manage that, given more gentle use. It's also got a usefully large 13-litre fuel tank, enough for many days of commuting.

One of the benefits of maxi-scooters over their smaller bretheren is the long wheelbase and often bigger wheels into the bargain, giving greater stability. The Chieftain is  no exception – its 14-inch front and 13-inch rear tyres grip the tarmac well (at least in the dry) and what it loses in short wheelbase agility, it gains in stable progress round corners and on dual-carriageways. The suspension is fairly basic, but the twin rear shocks do have five position pre-load adjustment, good news if you're planning to carry a passenger. The Chieftain might be heavier than a typical 125cc scoot, but carries its weight low down, so this isn't a problem. 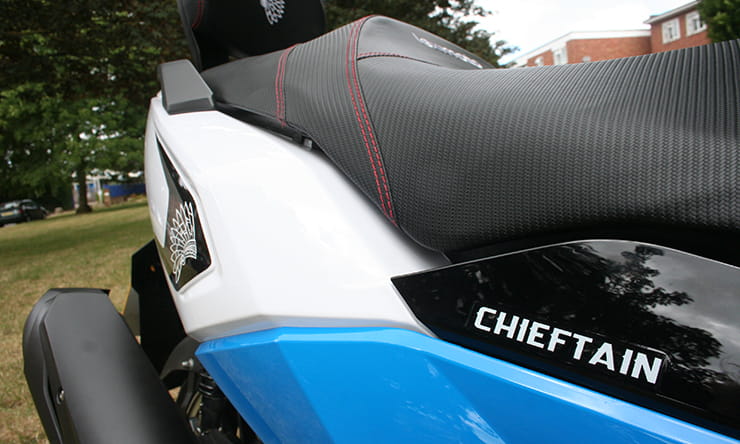 Another Euro 4 requirement for 125s is that front and rear brakes are linked if they don't have ABS, which most don't. The Lexmoto follows standard practice of having the left-hand lever control both front and rear discs. It's a good system, easily strong enough for the scooter's performance.

Maxi-scooters usually have enough space for a proper feet-forward riding position, but despite its long wheelbase, the Chieftain doesn't. It's a glaring omission, as this is a key attraction of the type. The seat's also very wide, which put me on tip-toes (30-inch legs) while waiting at the lights. The short screen does keep some of the wind off though, and pillions look like they get a better deal – big seat, substantial backrest and proper fold-out footpegs. 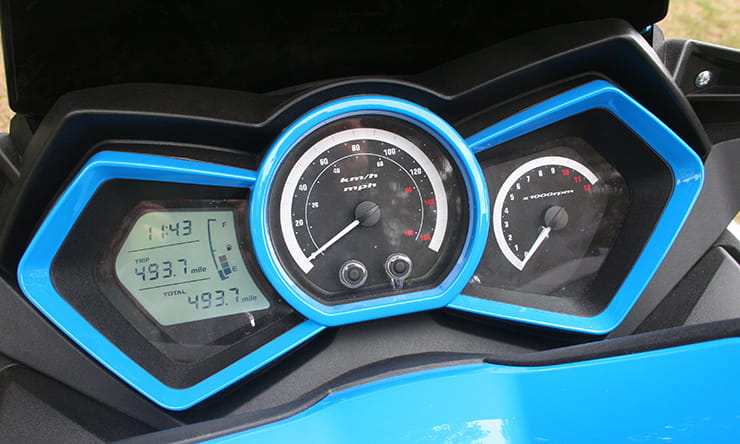 The most vital piece of equipment on any scooter is its luggage room, and here the Chieftain scores. There's enough room under the seat for a full-face lid, with plenty to spare, and two lockable cubbies are in the front apron. It's just a pity that the seat only hinges up to 45 degrees, making access awkward – Lexmoto says a better hinge is on the way. That apart, the dash is pretty comprehensive and later bikes will also have a USB port. 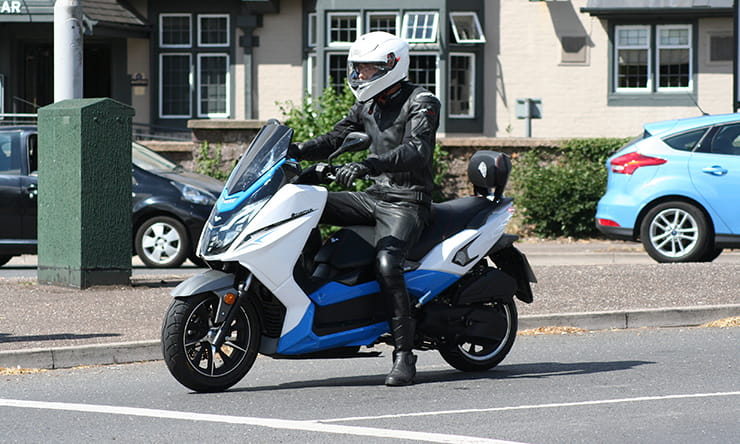 The Chieftain looks pretty imposing in a maxi-scooter sort of way, backed up by look-at-me blue and white graphics – the alternative is red and grey. So it's got some presence on the road, which could be just the thing if you don't like the idea of being perched on a tiddly scooter.

I can forgive the Chieftain it's average performance, because it's so much cheaper than the opposition, but the lack of room to stretch out – the whole point of a maxi-scooter – is a tad disappointing. It's a straight choice between this and a two-year-old Burgman.

Three things I loved about the Lexmoto Chieftain… 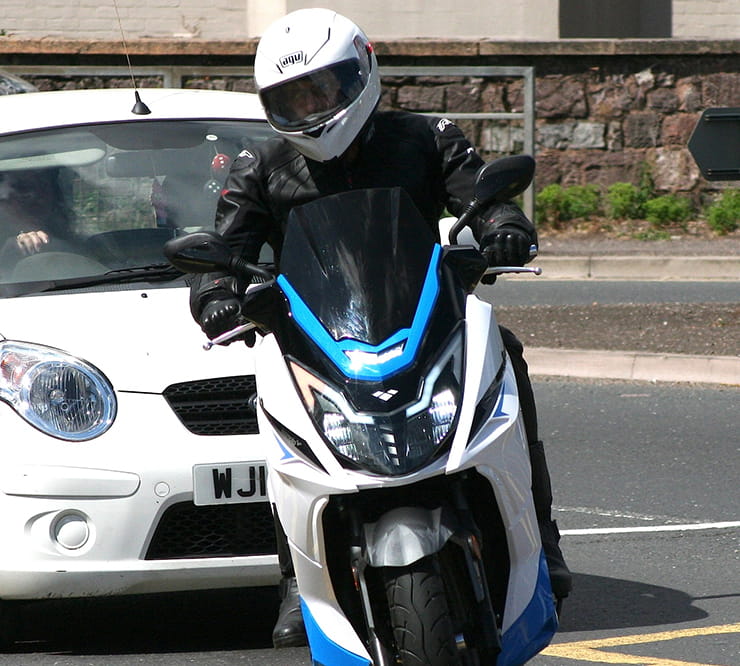 Looking to insure this bike? Find out about Bennetts scooter insurance.