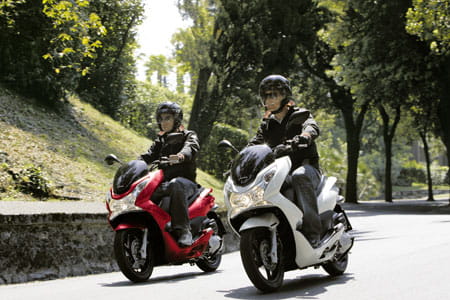 Frequent visitor to the top five monthly motorcycle sales tells you how popular the little PCX four-stroke scooter is. The 125cc scoot is not considered a go anywhere machine – although PCX owners will tell you they’d be happy to ride it more than the average 30-mile commute – as a working tool and social get-around it is a genuine master of urban life. The PCX scores highly on both points for two reasons: 1) it’s an economical form of transport and 2) it’s a funky-looking hack.

Honda’s little four-stroke engines have a reputation for economy thanks to fuel injection and clever engine design. The PCX goes further by having an ignition cut-out that comes into play after three seconds of idling, much like the stop-start systems found on cars.

With the PCX engine warm, it’s a simple matter of pulling up to the lights, and if stationary for more than three seconds the engine will cut out. Twisting the throttle starts the engine and off you go. It takes getting used to because the engine is smooth running and with the surrounding noise you’re never sure if it has cut out.

In stop and slow traffic of traffic light congestion the PCX makes complete sense. The system never lets you down and it’s saving you money! Not quite as much as Honda say we can; 130 miles per gallon is the quoted figure but 119.3mpg is our best recorded with luggage and waterproofs onboard. Still an impressive 160-odd miles to the small 6.2-litre tank, though.

To say riding a modern scooter is easy is like saying ice cream melts in sunlight. The PCX couldn’t be any easier to ride. Open the throttle and the variable CVT drive immediately steps in line to fire you forward without any issues. Pull the front handlebar-mounted lever to work the hydraulic front brake; pull the left lever to apply the rear brake. Balance the two for complete stopping authority.

Easy to operate indicator and light switches make for a worry-free ride. The swooping frontal area of the PCX is predominantly all lights, affords great visibility at night and alerts opposing traffic to your presence. Honda has a range of accessories for the PCX to style it to your taste. Some are cosmetic such as panel and wheel stickers, and others include useful items like a rear carrier and protective film.