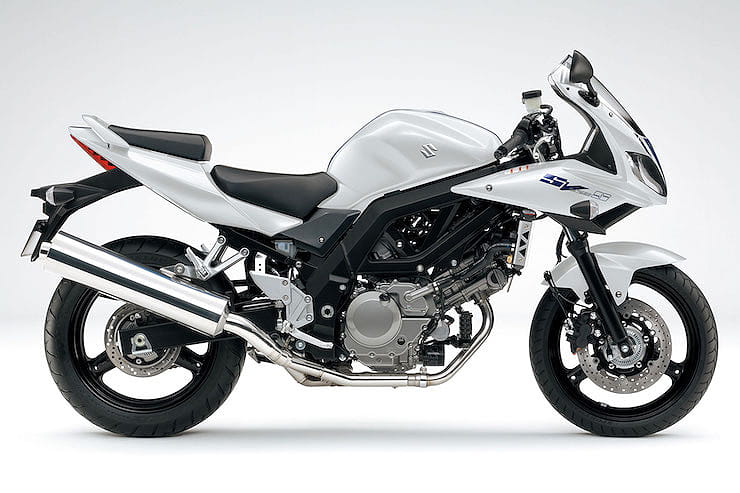 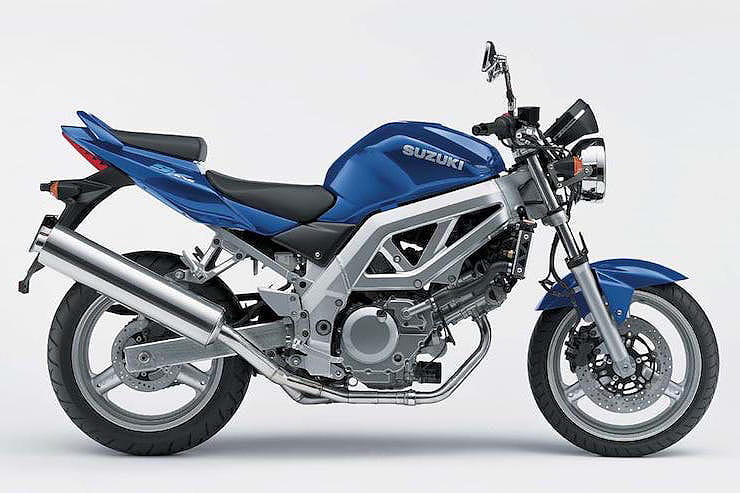 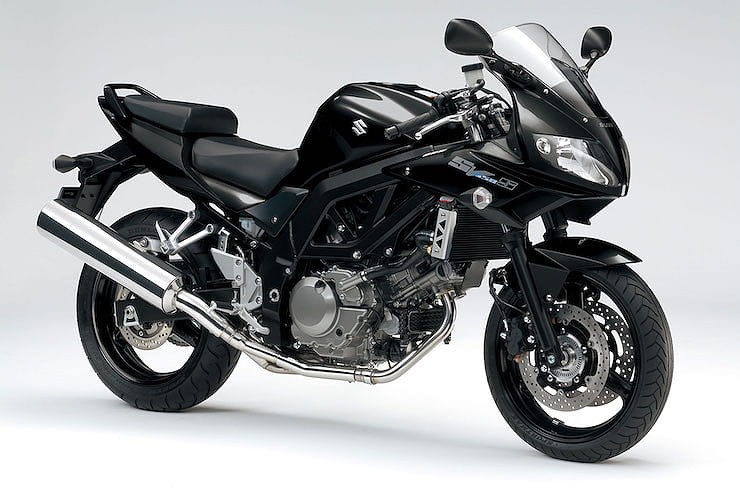 The Suzuki SV650 - a super-successful middleweight twin, existed in two early forms, which is why we offer two separate reviews/buying guides: the first generation model reviewed here from 1999 to 2003, and this, the second generation model.
Both are brilliant ‘first big bikes’. They're affordable, easy to handle, versatile (with sporty faired and naked roadster versions offered) and equipped with brilliant, punchy and characterful V-twin engines.
In 2003, Suzuki replaced its bigger TL1000 with a new SV1000, partly due to the success of the 650, and took the opportunity to give it new angular styling including new box-section frame. To coincide, Suzuki revamped its SV650s to match.
Out went the feminine curves of the original SV’s fairing for a more angular unit. The frame too went from tubular to an angular lattice, the swingarm changed while fuel-injection replaced carbs and new clocks including a digital speedo replaced the previous twin dials. It was also a little longer, slimmer, had a touch more power and was slightly heavier.
The riding experience, was little different, and, again, the SV proved a huge success, particularly with those wanting a manageable, affordable but also versatile and engaging ‘first big bike’. 2,266 sold in its first year as new riders, commuters, and even ‘Minitwins’ racers sought them out.
Later changes included a black frame (2005 - on), ABS option and a twin-spark motor (2007) and a fully-faired Sport model (2008). In 2009 Suzuki’s new SFV Gladius replaced the naked SV, but the half-faired version remaining on sale until 2014. Today they remain a good value used buy.

The SV650, in all its guises, was always something of a bargain and that was equally true of this second generation version. When new, the half-faired ‘s” was around £300 more than the more basic, naked version but, even so, was the more popular and the majority of the used examples that remain available – over 22,000 SVs in total were sold in the UK over its lifetime – are this version. It is possible to buy a ratty example for under a grand but we would advise against it. Instead, a serviceable, legal machine with plenty of life left will cost around £1250 upwards with the best, recent, clean low-liers nudging £4000. Whichever way you go, it’s still a bargain. 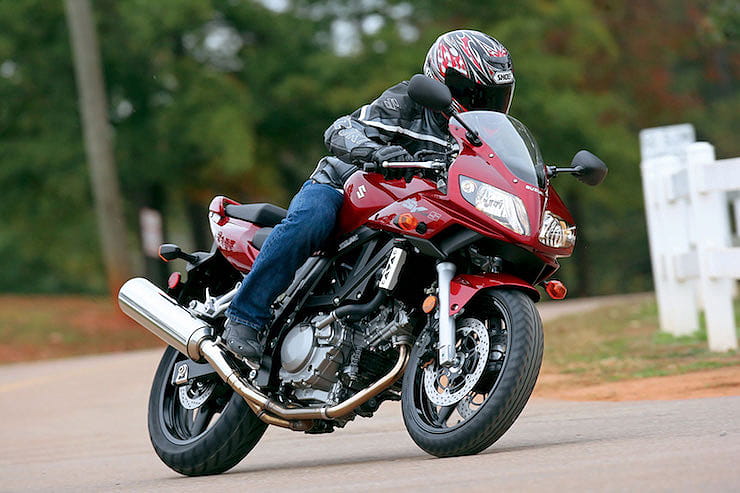 The power delivery and performance of the SV650, whichever version you go for, has always been one its most attractive features, being far smoother and less intrusive than most middleweight V-twins, most obviously Ducati’s Monster. On top of that, with around 73bhp, or slightly more than the original version, the SV is even less of a slouch from the off and always has plenty of grunt when it comes to overtaking.

Best of all, though, the 645cc V-twin also has something extra that most mass-produced Japanese engines don’t have – and that is character: as with the original, the healthy throb of the twin pistons lets you know the SV is alive and although it vibrates through the frame at higher revs that’s what V-twins do and what makes such engines endearing to their owners.

The 2004/K3 version of the SV650 was powered by essentially the same 645cc V-twin as its predecessor but, due to the onset of Euro3 regulations, had its carburettors replaced by an electronic fuel injection system implementing Suzuki Dual Throttle Valve system (SDTV) and Auto Fast Idle System (AFIS) and also had a catalytic converter fitted. It made little difference to its performance and reliability generally is good. In 2007 new twin-plug heads were also introduced to further improve emissions, but it was the last update before the naked SV650 was superseded by the SFV650 ‘Gladius’ which was launched in 2009.

The six-speed gearbox, too, is also generally robust and with a noticeably smoother action than Italian rivals of the time.

Original exhausts, however, are prone to rot as, being built down to a price, the SV’s finish is a little suspect. As before, when buying used try and steer clear from loud end cans unless you’re best mates with your MoT man while with post-K3 models any aftermarket exhausts will need some electronic jetting via a Power Commander or similar. Ask if any of this has been done. 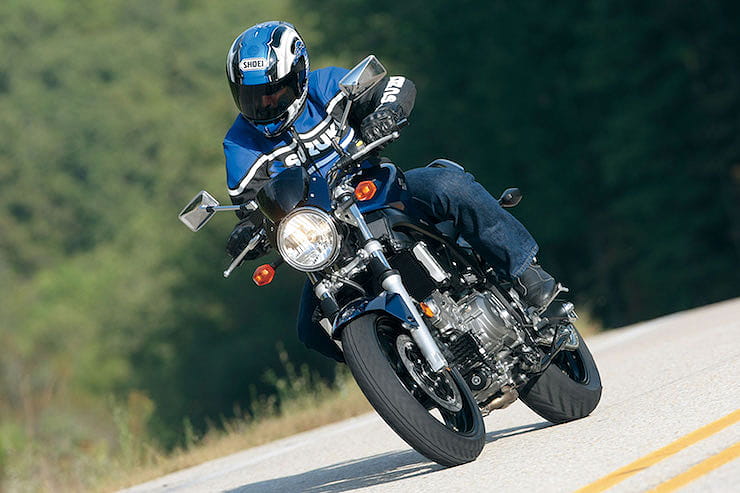 Although now with fuel injection and a catalyser, the K3-on SV650’s fuel consumption is little different from its carb-fed predecessor. So, as with that bike, being a lower-revving middleweight twin, and a fairly lightweight one at that, means SV fuel consumption can be pretty good – above 50mpg if ridden gently. But again, there’s also a catch: the lively, entertaining SV also thrives on revs and its sweet handling encourages the rider into, er, ‘vigorous’ riding, both counting against any sort of economy. Overall, again, expect around 40-45mpg.

Again, despite the new frame and slightly revised dimensions, the K3-on SV’s handling and ride isn’t that much different from the 1999 original. It’s slightly longer and heavier so isn’t quite as nimble – but you’d be hard pushed to notice without a side-by-side test. Overall, the handling is intuitive, light and nimble. The suspension, being a budget-ish bike, wasn’t the best when new and is almost certainly in need of an overhaul on older, used examples, although this may not worry anyone wanting a simply commuter workhorse. The sports ‘S’ version, again, is more engaging due to its sportier riding position and lower bars. This later version is also slightly heavier than the original but again you’re unlikely to notice. If you want to uprate the suspension, www.jhsracing.co.uk are the experts in SV track preparation and much of their knowledge translates to a better road bike. 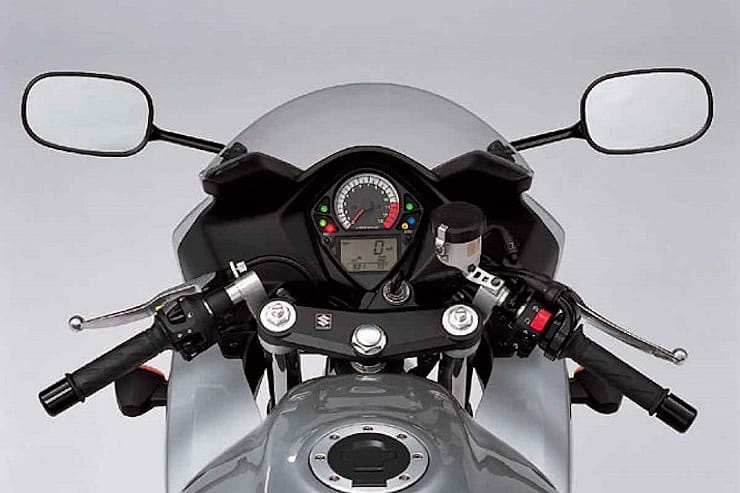 As with the SV’s suspension, the brakes fitted to Suzuki’s budget middleweight V-twin were victims to cost-cutting and a comprise twin front discs grasped by fairly basic twin piston calipers. That said, the SV’s so light and nimble that unless venturing out onto a track you’re unlikely to want for more. Because of a used example’s likely age these can gunge up, corrode and seize, although routine maintenance should keep on top of it. Otherwise the simplest and most effective upgrade is the usual braided hoses and softer compound pads.

Although very slightly longer, a touch slimmer and with all-new bodywork, there’s little difference between both the ergonomics and comfort provided by the older and later K3-on SV650s. The S version, again, thanks to its wind-cheating fairing and lower handlebars which help tuck the rider out of the worst of the elements, is the better option if you’re likely to lots of motorway miles. While the saddles of both, being identical, are tolerable without being sumptuous. Yes, you can do adequate distances on an SV but comfort is passable at best.

The original, 1999 SV650 was a pretty basic bike when launched and this later version isn’t much better. In fact the only substantial difference was the new instrument panel with central rev counter and LCD panel for speed, mileages, engine temperature, clock and reserve indicator.

That said, its popularity also means that plenty of aftermarket goodies were, and still are, available, ranging from tail tidys and fly screen for the roadster to exhausts, undertrays, mini-indicators and more. One word of advice, though: if buying used try and get the original bits in the deal – especially exhausts – you may want to revert it to standard. Try the excellent www.sv650.org for info on what works and what doesn’t.

The SV is also something of a budget bike so finishes are the best and corrosion on neglected or abused bikes is commonplace, so inspect carefully. Corrosion around the discs and plated components can take hold if the bike isn’t treated to regular clean and lubricate sessions. 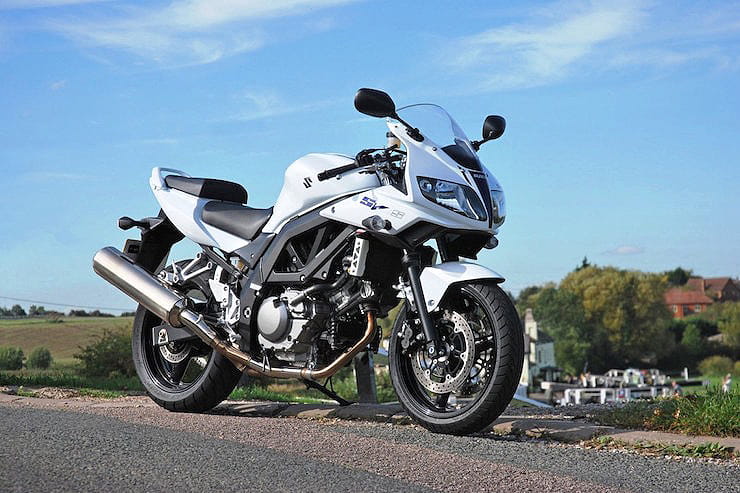 The SV650, and particularly this second generation version, was one of motorcycling popular success stories of the new century and had an extremely long production life as a result. At the same time, even though now ageing, it remains a hugely popular used buy thanks to its combination of value, user-friendliness and characterful performance. Though ageing, it remains relevant and if you find a good one you won’t be disappointed – and you should, there are plenty still out there. Watch out, however: although mechanical reliability is good, for corrosion, neglect and abuse is commonplace.

Three things we love about the SV650