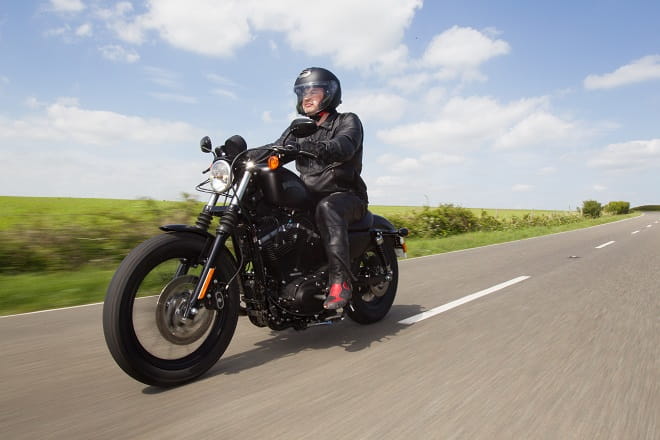 Everyone’s got an opinion on a Harley-Davidson. Love ‘em or hate ‘em, American metal is sure to spark debate. For most owners, there ain’t nothing else. Hogs have a huge and devoted following that no other brand can match. Harley ownership transcends motorcycling. It’s a lifestyle.

And to the man on the street, Harley is the quintessential motorcycle. A week with the entry level Iron 883™ (don’t forget that ™, you’re buying a brand as much as a motorcycle) raised my status from middle-aged dad to Hollywood rock star in a stroke. It was almost impossible to park up without some kind of flattering comment about my choice of transport. Harleys are cool. End of.

I’ve long had a soft spot for the entry level Harleys. While they are often derided as kids’ bikes by the Harley hardcore, and dismissed along with the other American iron as underpowered and irrelevant by many other motorcyclists, the 883 Sportster range, of which the Iron is the least expensive, plays an important role in getting newbies into motorcycling.

Weighing in at just £7,145, the Iron 883™ is instant badass biker in a box. Painted in matt (or is that matte?) black, with blacked out components, it’s a motorcycle that looks like its just ridden out of a movie set. Fire it up and at thuds into life with the sound of a ‘proper motorcycle’. So far, so good.

The price may be cheap, but the Iron 883™ is neatly appointed, even if it is low on spec. The keyless ignition is superb and does away with the problem of fumbling for keys with gloved hands. Simply stick the fob in your pocket and as you approach the bike it deactivates the alarm and turns on the ignition. At the other end, simply switch the bike off and as you dismount the alarm gives a reassuring ‘bleep’ to confirm its armed again. The engine won’t start without the fob in proximity, and even sitting on the bike will set of a warning alarm. 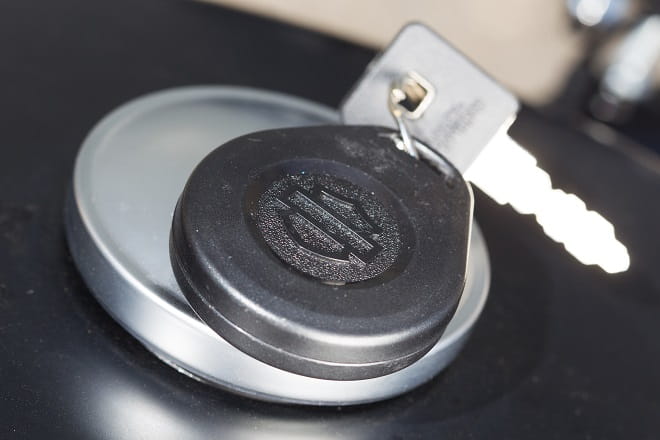 Riding is an enjoyable experience, as long as you stay within the parameters in which the bike is comfortable. Look, it would be easy to sit here and write an essay about the bike’s deficiencies, so let’s get it out in the open now. It’s slow. The peanut style fuel tank is tiny and will see you searching for a fuel station after 100 miles. The gearbox is clunky. It’s got no pillion seat and handling isn’t great. Vibration comes standard from 4,000rpm and you won’t need to ride with much enthusiasm to ground the footpegs through corners. Well, we could go on even further.

But all of this matters not one jot. For all that’s just not very good about the Iron 883™ there’s a lot that’s absolutely fantastic about it, just don’t expect me to be able to explain why. It’s an unashamedly simple machine that evokes visions of riding into the sunset on your steel horse.Owning one of these is all about making a statement, with Harley producing a whole range of accessory parts to give owners a chance to really personalise their machines. 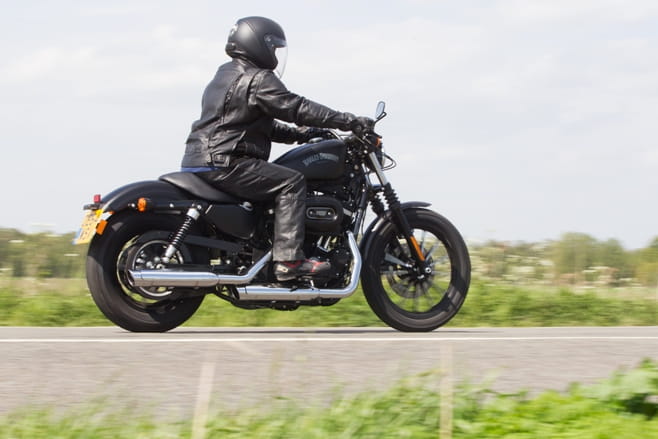 What you are buying is a piece of iconery (I know, it’s a made up word). That engine is as low tech as it gets, but sounds and feels great as you sit at the lights, even if it is a bit gutless and vibey as hell after 4,000rpm. It’s traditional, that’s for sure, a fuel-injected 883cc V-twin with two pushrod actuated valves per cylinder. No power figures are quoted, but it pushes out a healthy 70Nm of torque through the five-speed gearbox and belt final drive. Hauling around 255kg minus rider, it’s hardly going to be exciting, but cruising along between 55-65mph it certainly put a big smile on my face.

It’s well built and full of nice, modern, touches that don’t detract from the traditional styling. The ABS brakes, a £500 option, are effective and in obtrusive, while the small LCD readout with RPM and gear indicator is a welcome addition to modern Harleys. It’s reasonably comfortable and I really liked the switchgear.

There are better bikes out there for the money for sure. If you wanted handling you’d be looking at something like Yamaha MT-07 or Triumph Street Triple. But as you’re reading this, chances are you are in the market for something a bit different. The Japanese companies all make Harley clones, which are all competent bikes but lack the character and cache of the American machines. I’m sure that many buyers, if they are even considering other brands, may well be looking at bikes like the Ducati Scrambler or Triumph Bonneville – entry level bikes with the right badge on the tank

What even those iconic brands won’t give you is entry to the Harley fraternity. Whether or not that is a good thing or not is for you to decide, but with over a million members in the Harley Owners Group (HOG), you will certainly be buying something more than just a motorcycle. 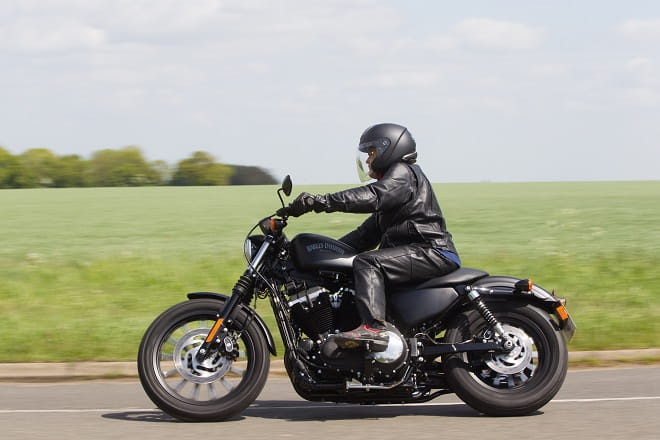 It might not be everyone’s cup of cappuccino, but the baby Harley has plenty to offer. How long the 883 will remain as part of the Harley range remains to be seen, in light of ever increasing emissions laws and the introduction of the forthcoming watercooled 750, so now may well be your last chance to grab a piece of pure and simple American metal.

On the plus side it's a Harley for £7,145, it has a clever keyless ignition system and is authentic a piece of Americana as Mom’s apple pie. Yet against it, there's the love it or hate it image, more power would be welcomed and that limited fuel range. 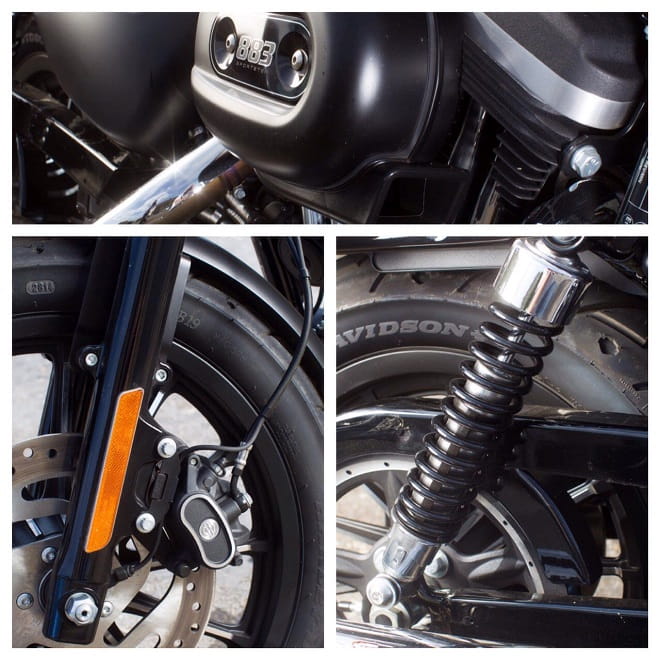 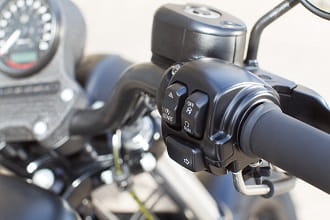 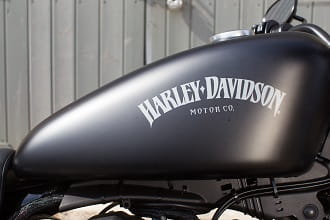