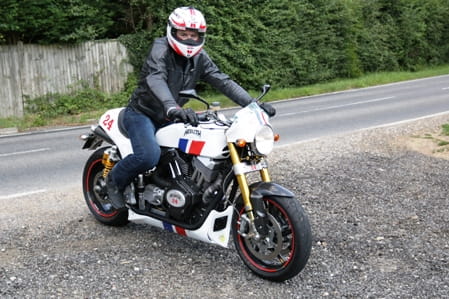 We ride the Hesketh '24' prototype and retain our kidneys!

Let’s set the scene; I'm putting my helmet on and about to climb on the prototype of the first bike Hesketh have released in 32 years, it's called the '24' and in good time only 24 of them will be hand-built, each priced at £35,000. The boss, Paul Sleeman, offers some reassuring words before I hit the starter; "you drop it, I own your kidneys!"

I think he's telling the truth.

Here is a bike that is an adventure to ride; superbly unique, completely mad and highly entertaining. And that’s just the start. Being the first one ever built everything on it is brand new, the bike was only ridden in anger for the first time at the Goodwood Festival of Speed less than two weeks before and has only covered 50 miles since. I feel privileged to be entrusted with such a piece of history. And I'm quite attached to my kidneys.

Propelling this luxury, hand-built brute is a huge 1950cc S&S X-Wedge air-cooled V-Twin heart that protrudes from the sleek white fairings like a flexing bodybuilder. Blue and red stripes on a white background with the number 24 is an acknowledgement to Hesketh’s heritage reflecting the Formula 1 car from the mid-70's piloted by the late, great James Hunt. 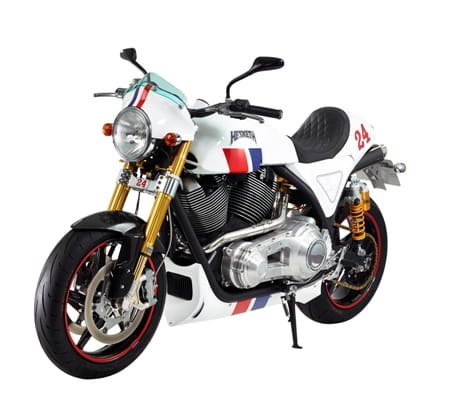 Scan your eyes from front to back and the Ohlins suspension stare back as do the Beringer brakes, engraved clutch cover, BST Blackstone carbon wheels, hand-stitched single-seat unit, 2-into-1 stainless steel and carbon under seat exhaust system. This is a hand-built bike using some of the very finest components and even with a seemingly whopping price tag you can't help but appreciate the attention to detail of the Hesketh 24.

Everything about this bike speaks volumes - it's loud, brash, rude. Hey, it's a 'Bike Anti-Social'! It's the ultimate 'look at me' bike, everyone knows you’re coming. No need for a horn just dip the clutch and blip the throttle, they'll soon get out of your way or turn their heads. As I rode through villages and towns the local cricket team didn't look too happy to see me but, like a royal procession, or perhaps a circus act, folk stand and stare. It's a bike that you'll get noticed on and will invoke conversation…only when ears have stopped ringing of course; ah, it's a ‘Bike Social’. Like a Police attack dog, it's quiet and obedient until poked. The dog obeys commands but is still ferocious, much like the 24. 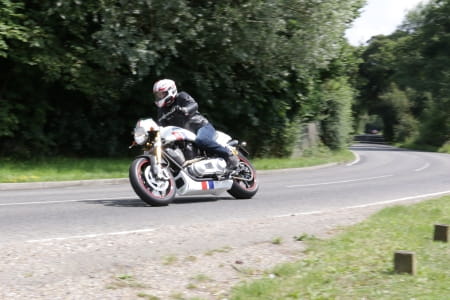 The throttle doubles as a weapon with which you can start Armageddon and the over-run is a whole new form of entertainment which pops and bangs almost on command and is enough to wake neighbouring counties.

First things first, remember that it's a huge V-twin so it's gonna vibrate. Fact. Embrace it though, I used it as a notification to change up, much like a dashboard light except that when the dials are shaking so much, I knew it was time for another gear! That said, the gearbox is under-used primarily because of the sheer quantity of torque available; 145 ft lbs to be precise, which is comparable to Triumph’s Rocket III and almost 50% more than a Ducati 1199 Panigale. First gear is short but third and fourth are really all you'll need. The Baker gearbox is technically a 5-speed box with an overdrive for touring but you’ll never use it.

Sleeman tells us he’s reducing the width of the bars by 2” for the production version of the bike to help reduce vibration, they will made from gel-filled carbon. The 243kg weight will be reduced by 20kg and there’s also work to be done with the non-working speedo, heat management and keyless ignition but remember we’re riding the first ever version of the bike which has covered so few miles, essentially we’re a test pilot!

No sooner had we ridden away from Hesketh HQ, the heat emanating from the two cylinders were already cooking my thighs. 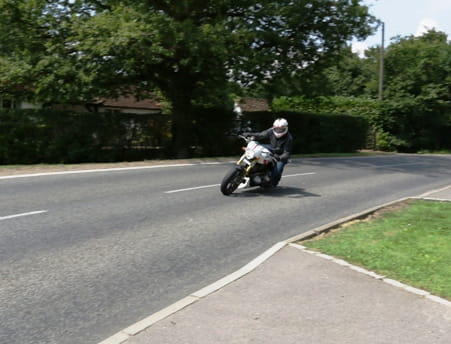 I approached the first corner which required a bit of lean with trepidation, my kidneys flinched but the Dunlop Sportmax-shod 24 coped admirably with said bend. New found confidence installed and bravado to be a little more aggressive next time seeped through although that could never match the 24 for its brutishness. A bit like throwing a pebble at the school bully who simply snarls to let you know they could 'av you at any time. Treat the 24 with respect, sit back (not literally) and enjoy the adventure. The corner speed is aided by the distribution of the 19-litre fuel capacity being spread over three tanks, one of which is in the belly of the bikes.

A mighty motor needs a mighty clutch and if you've not had time to go to the gym, at least your left forearm will have its own workout. Despite its apparent mechanical strength, flicking the gear-shift up or down is a little hit or miss. You're not entirely sure if you've selected until you release the clutch, even then you need to be a little smoother on the release, especially coming down the 'box. Neutral also likes to play hide ‘n seek but is displayed as usual with the green glow but this time it’s in a smart digital display embedded all by itself in the top of the upper fuel tank alongside your indicator, main bream and oil warning lights. 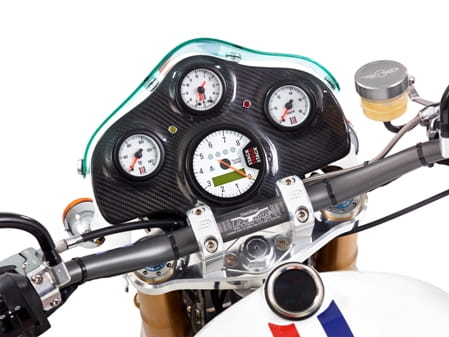 The ignition on the bike I rode was operated by a keyless two-button fob which then allows you to fire the engine up using the normal, electric start method. The twenty-four 24’s will each have two fobs but they won’t have buttons to press, just their proximity to the receiver under the seat will be enough to operate the ignition.

After a two hour workout on one the hottest days of the year, it was time to head back to base, with kidney’s intact. The 24 is different to anything else but once you get used to its very distinctive character, you begin to understand and enjoy its quirks. To be honest, I was disappointed to get off and I sincerely hope the people who do fork out £35,000 won’t just wrap it up and leave it to increase in value as a zero-mileage bike ready for auction in years to come. It would be like sending the Police attack dog to a special place in Battersea and not allowing it to chase robbers, the very thing it was bred to do.

Who would ride the 24? Mad Max perhaps, or the Captain of an Army Regiment using it battle. Could it be the bike that persuades Jeremy Clarkson to join his two motorcycle-riding colleagues?  It’s rude, cheeky, loud and brash, a bit of a geezer. 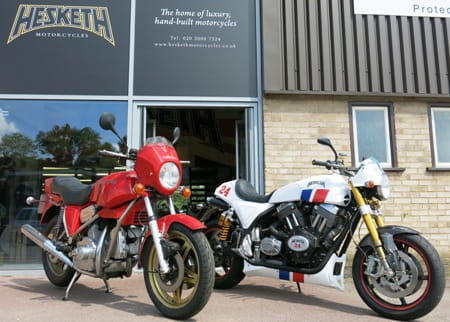 In contrast, back at Hesketh HQ and waiting outside is the very first pre-production prototype bike the firm ever built, back in 1980, in Lord Hesketh’s mansion. The V1000 is now privately-owned but the opportunity to have the first and latest prototypes together for a photo was rare.

The first bikes could find their new homes in time for Christmas with Sleeman telling Bike Social “We’ll be building five bikes at a time with first ones being delivered before the end of the year.”

If you get a chance to ride the 24, you will not forget it.