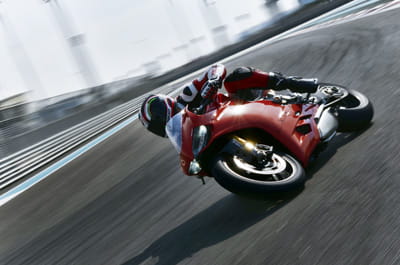 Just when you think Ducati can’t improve its superbikes any further, it comes up with a complete new bike that sets the performance V-twin bar so high you need to be on a ladder to see it. This is definitely the case with the 1199 Panigale.

Ducati has never been shy at making powerful V-twins but the boys and girls from Bologna sure went to town with the 1199 Panigale. The all new Superquadro engine caused some design headaches but it was worth it when you consider the claimed 195bhp output shames some Japanese multi-cylinder superbikes.

The engine revs like an inline-four cylinder too. Nothing like the usual V-twin engines Ducati has produced. Now while this isn’t a bad thing on the road – the low-down stomp is enough for most road riders to deal with – a lot of V-twin aficionados struggle to deal with the way the Panigale struts its dominating power right at the upper level of its rev range.

This is particularly noticeable at a trackday. Where you would normally expect a V-twin to drive you out of a turn with its solid midrange power pulses, the Panigale needs to be revved hard like a four-cylinder Japanese superbike. But even then Japanese bikes like the Fireblade and R1 have been tuned to deliver more further down the revs scale in the name of tractability.

The Panigale comes loaded as standard with an awesome array of technical goodies. Traction control is a bonus with the power available and has eight settings to suit rider and riding conditions. There’s also a quickshifter as standard to shift up without touching the clutch lever. But if you’re not hauling some big revs the shifter can result in clunky cog swaps.

A slipper clutch is par for the course on today’s superbikes but the Panigale also has a back up of Engine Brake Control (EBC). If wheel lock on a down shift is greater than the slipper clutch can handle, the bike’s ECU detects this and automatically ups the engine revs enough to avoid total rear wheel lock up.

It doesn’t matter where you look at the Panigale, there is something to see that makes sports and non-sports riders go ’ahhhh’ and ‘oooh!’ The Brembo brakes did it for us. Those Monoblock calipers are proper racing items and because the bike weighs in at 188kg, can force riders’ extremities against the tank with one savage grab of the lever.

The pinnacle of V-twin power has, without doubt, got the Ducati logo across it. But at £14,995 it isn’t everybody who can afford to find out, which is a real shame.

Get Ducati Bike Insurance with Bennetts