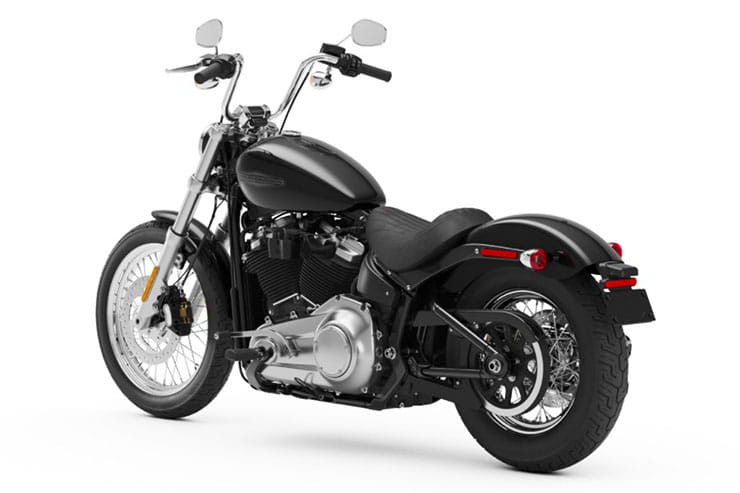 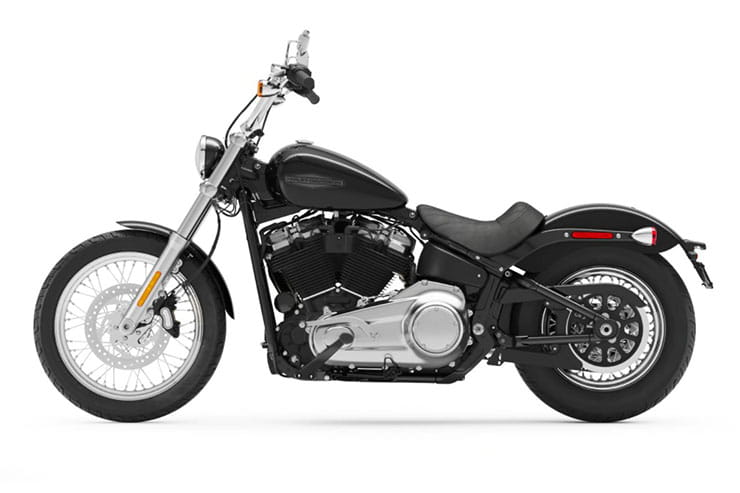 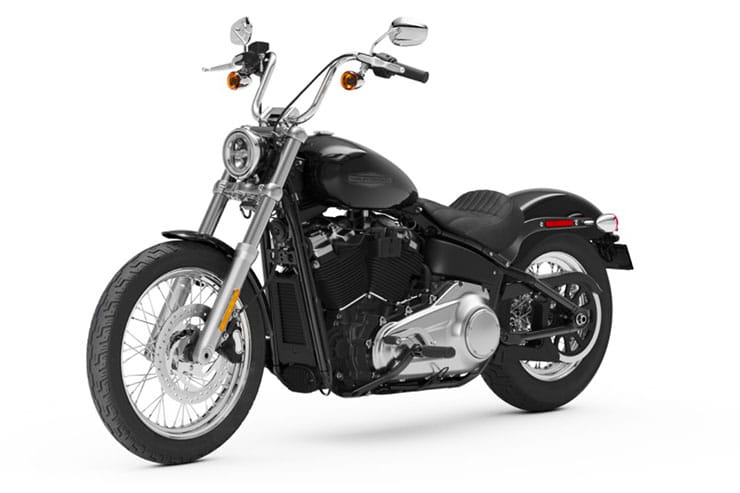 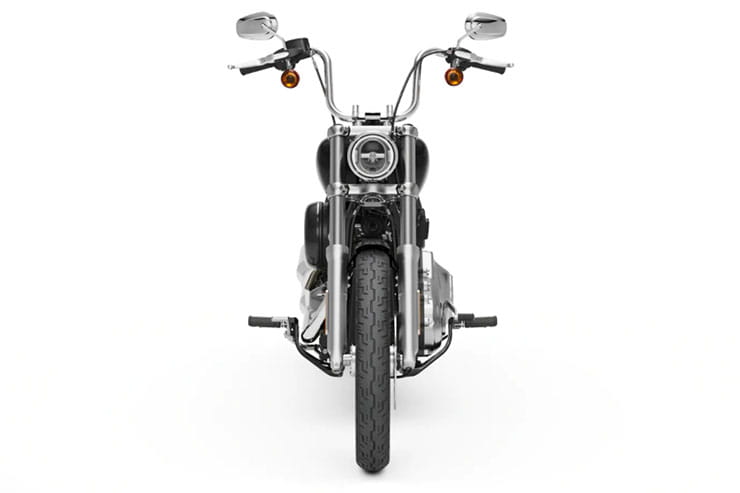 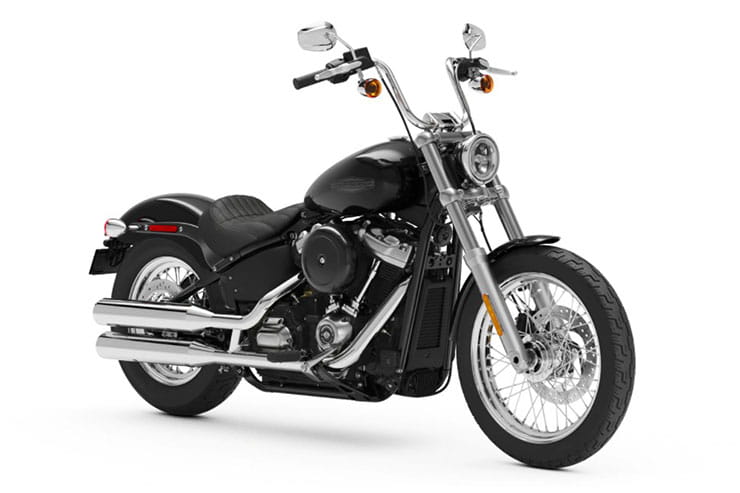 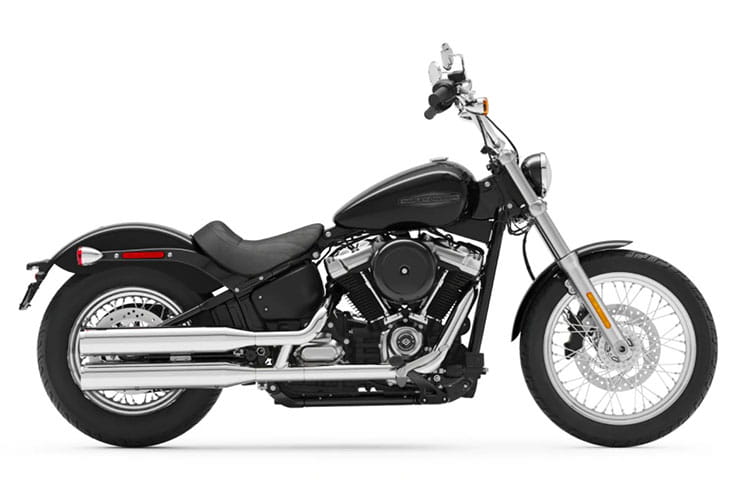 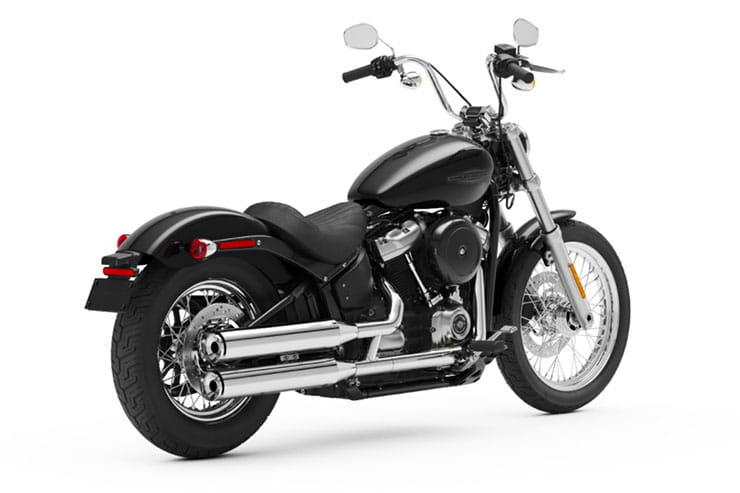 Back in February 2020, we reported that Harley-Davidson had reintroduced the Softail Standard after a gap of thirteen years since it was dropped back in 2007. Aimed as a starting point for the thriving customisation scene, the Standard is described as Harley as a "raw, stripped-down bobber style. A blank canvas for customisation".

What we didn’t realise at the time was that, following the later canning of the entire sportster range in December 2020, the Softail Standard would become the entry point to the world of Harley and their cheapest bike.

Fast-forward far too many lockdown months and we get a chance to take the Standard out on the roads and see how is stacks up against that stripped-down brief and against the rest of the range. 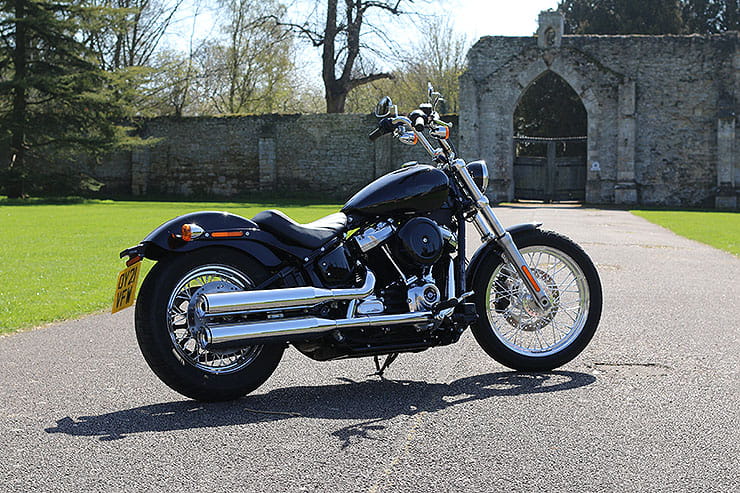 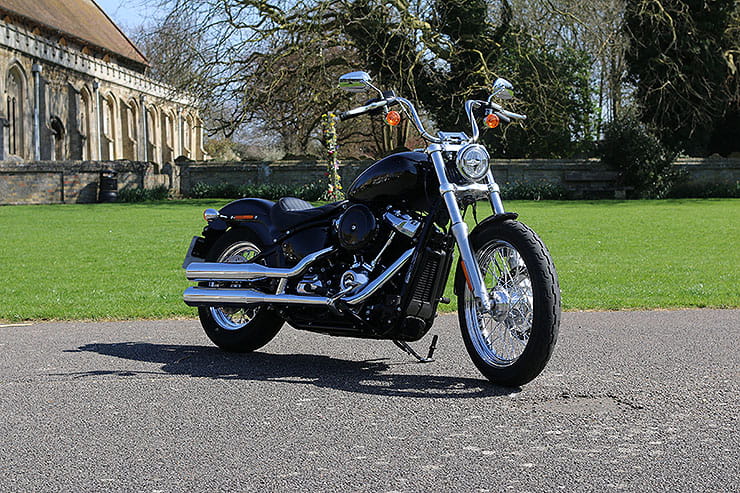 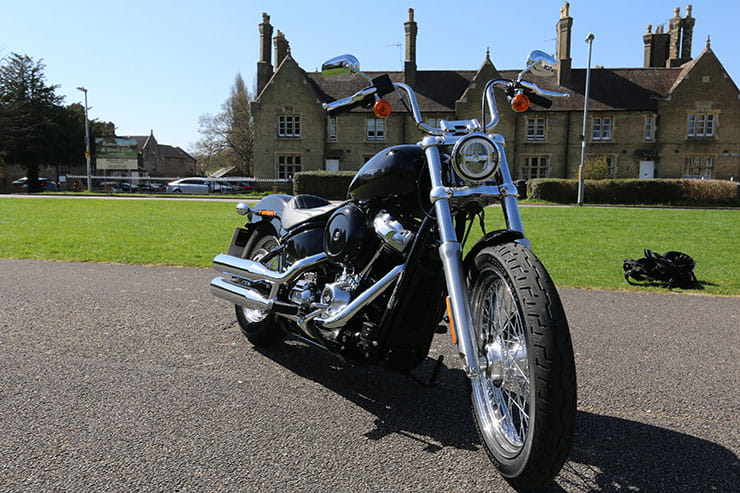 Despite the entry level positioning and 'blank canvas' intention, the Softail Standard has a very un-entry-level price tag of £12,995. This hasn't been helped by a significant price hike of £1,500 in January this year, when the Softail range got some updates.

As you would expect though in these days of quick and easy credit, you don't have to shell out too much of your hard-earned to get a nice shiny new Standard parked in your garage. A typical PCP Deal would see a £1500 deposit followed by 36 monthly payments of £171.34, leaving an optional final payment of £7,705. If that still seems a bit rich, then a Hire Purchase agreement could see you put down the same £1500 deposit and then 36 monthly payments of £358.24 before the bike is yours.

With used Harley values holding up well, you could move the bike on at the end of the three years and see a good proportion of your outlay back.

The trouble with bikers is that we all like to look at the bike's stats and play mental top-trumps with power and torque figures. Unfortunately for Harley, they always seem to lose out by having surprisingly low power outputs, considering the size of the engines, and the Softail Standard is no exception. Fitted with the 107cubic inch (1746cc) Milwaukee Eight engine, it puts out a scratch over 86bhp.

In today's world of 200bhp super-nakeds and 170bhp adventure bikes, this sounds pretty poor, but as anyone who has ridden a Harley will testify, the low power figure is just a direct result of the low revving engine and it’s the monumental torque figure that we should all be concentrating on.

Pumping out a mightily impressive 144Nm (107 ft/lb) at just 3250 revs, I defy anyone to honestly say that the Softail Standard feels underpowered.

Smooth and flexible, thanks to Euro 5 compliant fuel-ignition, the engine pulls cleanly from tick-over and just keeps pulling and pulling, and then pulling some more. It's addictive and exhilarating in equal measure. 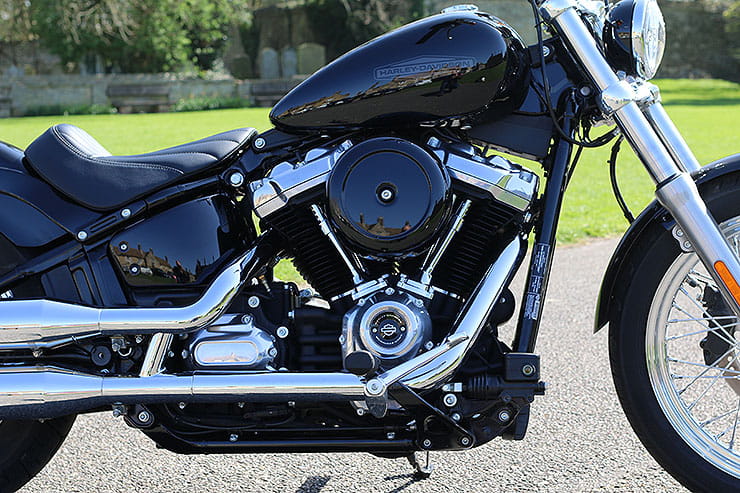 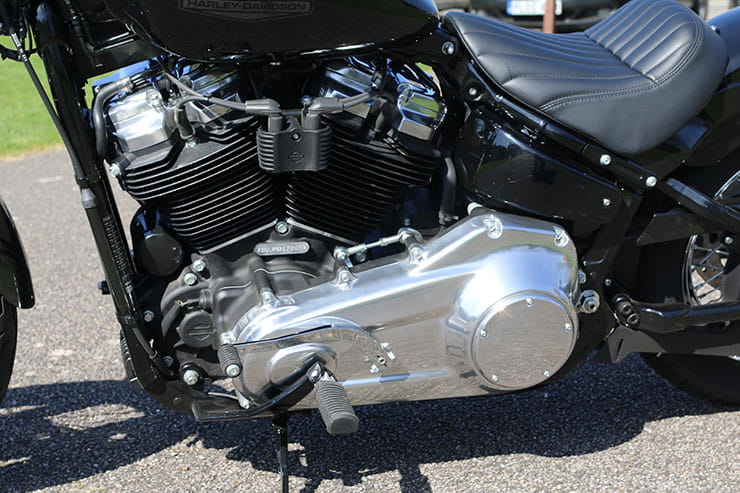 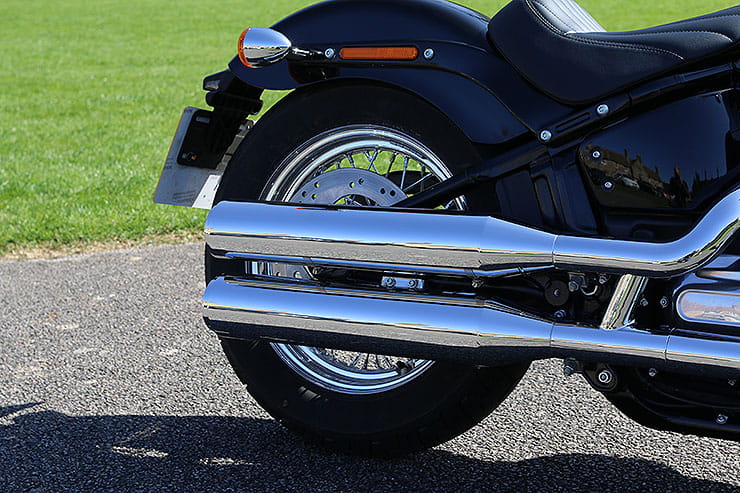 The Softail Standard is only available from the factory with the 107ci 8-valve Milwaukee Eight engine and it's a choice that, in my mind, suits the bike well.

Right from the off, the bike feels strong without being intimidating – if anything it's quite forgiving as the engine is strong enough to cover even the basic errors, easily pulling from standstill in second gear.

If outright power is your aim though, the 'blank canvas' ethos comes into play with a number of approved Harley-Davidson upgrades that can take your mild-mannered 107 up to a flame spitting 128ci (2098cc) Screamin' Eagle stage IV kitted beast putting out up to 120bhp and upping the torque to a neck-snapping 170Nm (126ft-lbs) – all assuming you can stomach the £3.5k add on price.

The 6-speed gearbox takes some practice to perform at its best. I hold my hand up to being quite a lazy gear changer (most of my changes are unintentionally clutchless) and the Softail Standard soon highlights my faults. You need to be very pronounced in your actions to get the box to shift smoothly and effortlessly, particularly at lower speeds or higher loads, but once mastered, it performs well, and when cruising is quite happy with clutchless upshifts.

Quiet enough at idle to keep the neighbours happy, the stock, chrome, twin pipes come to life on the road providing a baritone rumble to accompany your ride without becoming tiresome. If you are looking to make more impact, there are countless HD approved and aftermarket pipes to choose from.

I have a set test route that I take all test bikes on – a selection of windy B-roads, dual-carriageway A-roads, some town, some congested city and total round trip of just under 130 miles.

I ride how I would normally and try to ignore any average or actual MPG figures displayed on the bike's dash when riding, as I find these can influence my riding.

After brimming the bike on departure and with a total ride distance of 128.7 miles (thanks in part to some road closured in Cambridge), I re-brimmed the bike with 12.79 litres (2.8134 gallons) of fuel giving an overall mpg of 45.75 mpg.

This compared surprisingly well against Harley's claimed average of 43mpg, and is mirrored on fuelly.com where a single 2020 Softail Standard owner reports 47.9mpg over 1700 miles.

With a 13.2 litre tank, this gives a realistic range of 130 miles which considering the onboard comfort is more than enough between breaks.

There's no getting away from the fact that, fully fuelled, the bike weighs over 300Kg, and pushing it round the garage or carpark, it feels every kilo of it. On the road though, the bike carries its weight very well, and at A and B-road speeds, the handling is deceptively light.

The bumpy fenland roads of my test route overwhelmed the shocks at times though, resulting in a buckeroo ride and being unseated on a few occasions. Overall though, on slower and/or smoother sweeping roads, the ride is plush and smooth, and despite the lack of lean angle (HD quote 28.5 degrees), I never found myself scraping footpegs on roundabouts (not without some provocation anyway). 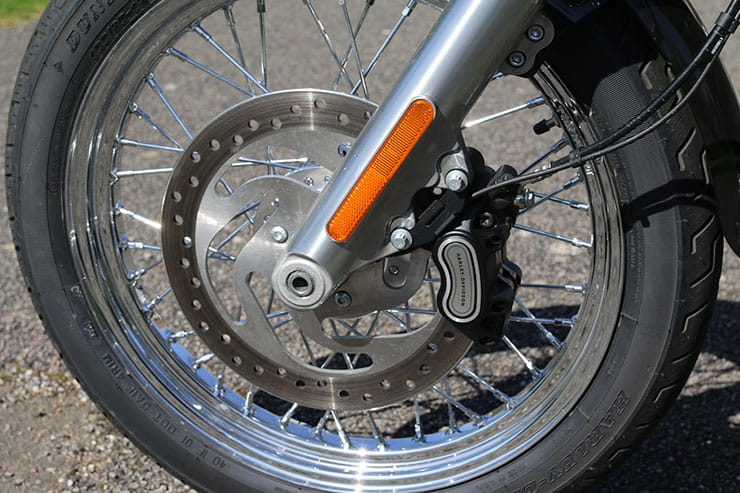 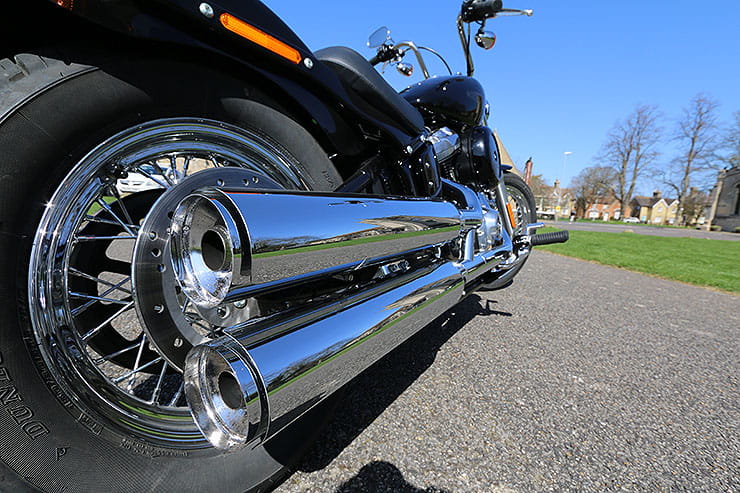 The sight of a single 300mm disc up front is a bit disconcerting on a 300+Kg bike, but the four-pot HD branded (Brembo) caliper does a great job of hauling the bike down to sensible speeds when needed and, when combined with oodles of engine braking, the bike never feels underbraked. A single twin-pot caliper does the business at the back, but this is less than confidence inspiring, lacking feel despite having sufficient force to provoke the ABS into action. Once provoked, the action is slower than expected with a defined pulse, rather than the hornets-nest buzz of some smaller systems, but no less reassuring.

Both brake and clutch levers are big and bulky, but in keeping with the style of the bike. However, a lack of any reach adjustment may make the smooth action more difficult if you are small of hand. 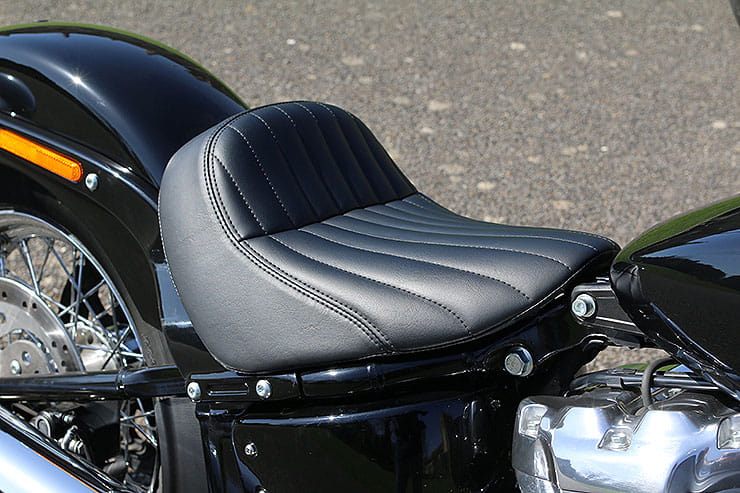 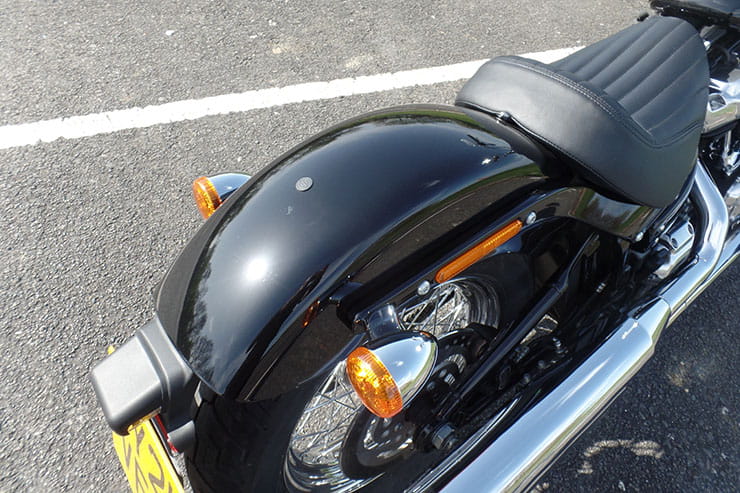 After a 3-hour ride, I was glad of a break and it was clear that there are two areas that would need attention if this were my bike.

The low, low saddle height of just 680cm means that even for those of us of less than average height (I'm 5'6" with 30" inside leg) the riding position can be cramped with your knees higher than your hips. If you are over 6' you should definitely test ride before buying as this may prove a major sticking point.

Secondly, the mid mounted pegs, combined with that low saddle, make it difficult to take any weight through your legs, leaving you feeling like you need to push your feet down on the pegs just to stop your legs from being split apart and flailing in the wind.

All this resulted in tired legs, lower back pain and a very sore bum from the plush yet confined seat which doesn’t allow any shuffling or adjustment. It might just be me (lockdown has not been kind), but I would suggest a decent test ride if you feel this might be an issue.

Pillion provision is non-existent, so if you are planning on touring, you will be riding solo. 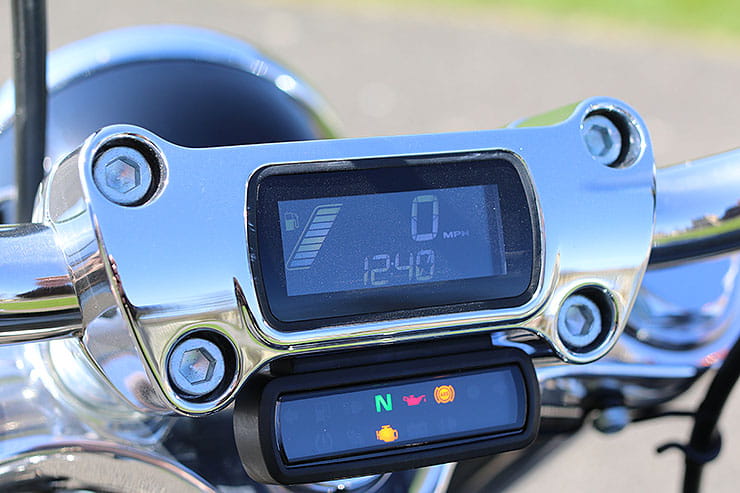 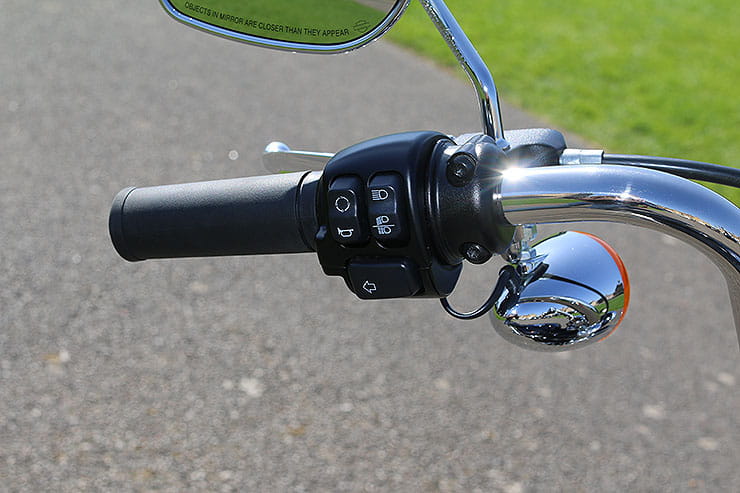 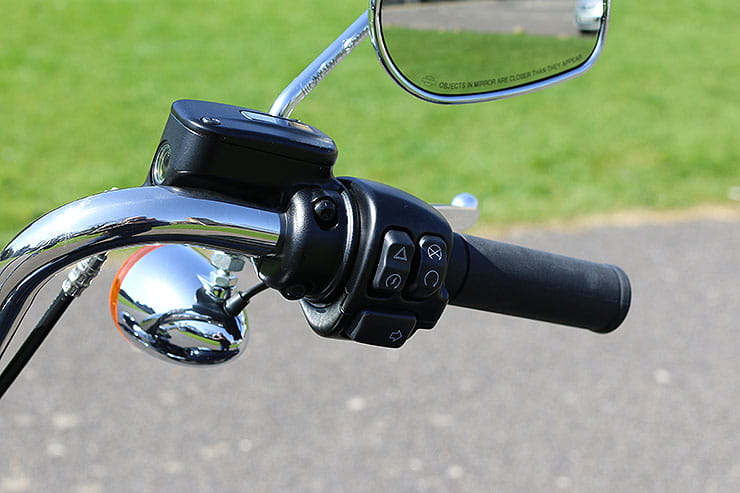 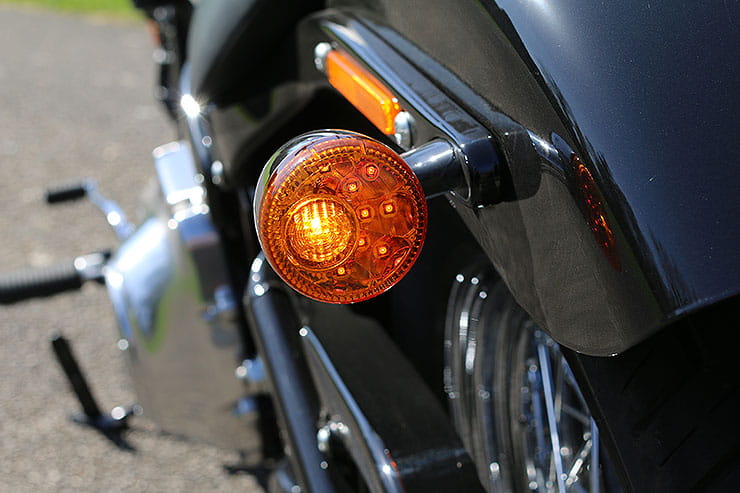 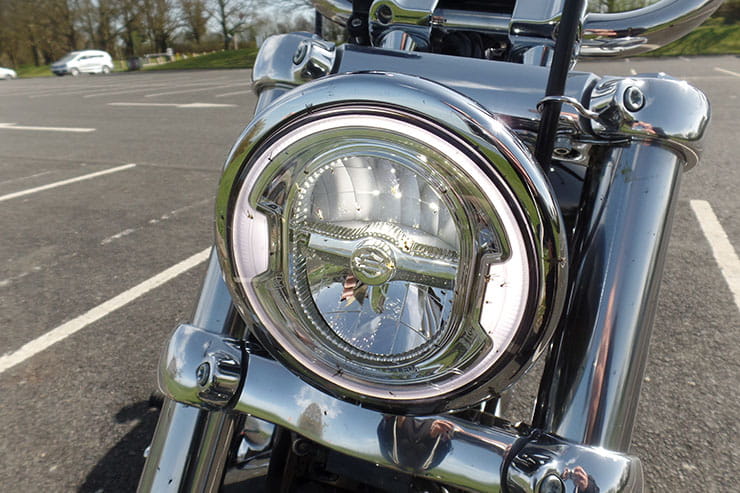 While the Softail Standard isn't bristling with Ducati or BMW levels of rider aids, there's enough to keep the bike relevant and modern feeling. Keyless ignition is a delight and should (in my utopian world) be standard on all bikes.

We get a mix of filament and LED lights with an excellent LED headlight which adds real presence to the bike, self-cancelling indicators (which work well, once you learn to trust them) and a small (by competitor's standards) LCD screen which shows all the relevant info you could need including the odometer, time, 2x trip counters, range and rpm – all toggled through via a button on the left switch gear. That’s it. No rider modes (you don't really need them as the engine is so flexible), no traction control, no cornering ABS, no radar assisted cruise control. Did I miss any of them though? No not at all. The beauty of a Harley, no matter what model, is the simplicity of the bike and the connection that is formed between bike and rider. 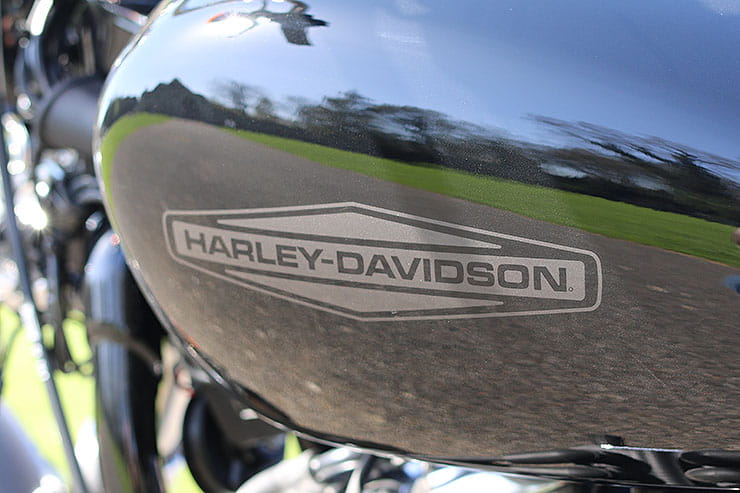 In the absence of the Sportster range which, in my mind, provided the perfect entry to the Harley-Davidson brand, the Softail Standard does a good job of taking over the mantle of 'my first Harley'.

It's easy enough to ride to be unintimidating for beginners (it's even available in A2 form), the styling will offend no one while still delivering bags of Harley style. The low seat and mid-mounted pegs make it accessible to all, while the custom catalogue and easy-to-swap nature of much of the bike means that it can grow with you as you develop into the brand.

My only fear is that the entry price for the HD range is now at a point where you'll have to be pretty damn sure you want to join and this will inevitably make some look elsewhere. 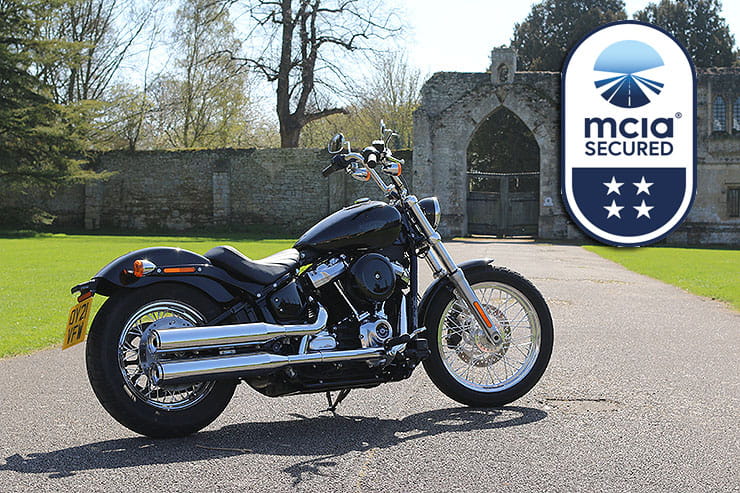