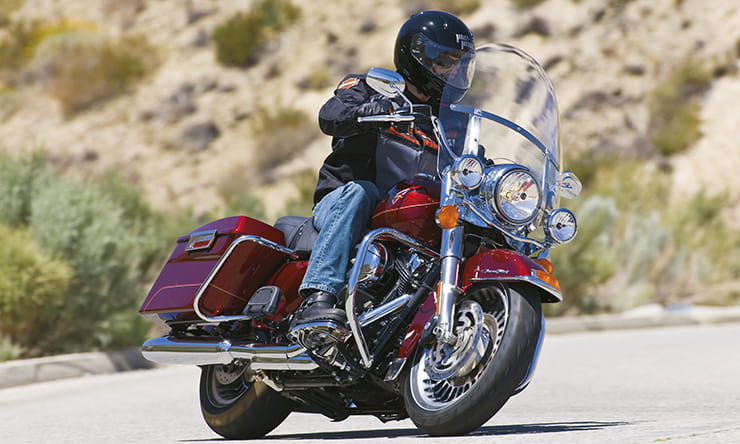 The Road King is an archetypal Harley-Davidson motorcycle with a classic look that really appeals to purists. It’s a wonderful tourer with an upright riding position and large screen as well as panniers as standard. If you want to go retro, the Road King Classic replaces the solid panniers for leather items to add even more vintage flair. When it comes to a Harley tourer, they don’t get much more authentic than a Road King. 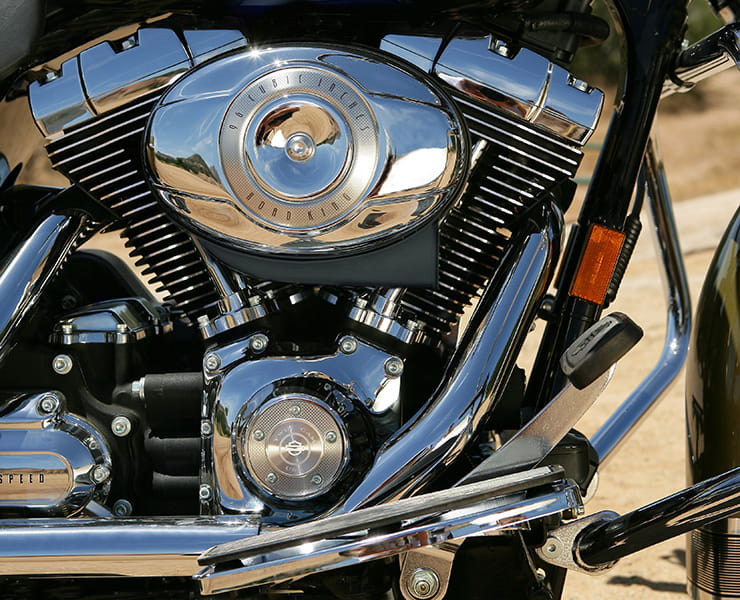 In 2009 Harley updated their Big Twin powertrain (that’s engine to you and me) with the all-new Twin Cam 96/96B motor. Featuring 700 new components, the only parts of the new motor that weren’t changed were the cylinders, rocker arms and rocker boxes – cranks, conrods, cases, everything else was all-new. Displacing 1584cc (96 cubic inches) the Twin Cam 96 has the same bore as the older Twin Cam 88 it replaced, but with a 9.5mm longer stroke. This boosted the torque from 80.4ftlb to 90.7ftlb, which is produced at just 3400rpm. As well as a revised six-speed transmission (with a lower ratio top gear) the Twin Cam 96 also came with emissions regulation-meeting features including an airbox flapper and exhaust valve and also a lighter clutch. Pleasingly, service intervals were also doubled with the primary chaincase drain now 10,000 miles and transmission drain 20,000. There are two formats of the Twin Cam 96 engine, the standard and B, with the B denoting an extra internal balancer shaft that Harley claimed quelled 90% of the primary engine vibration so that it could be rigid-mounted in certain models. In addition, Harley released an official 103 Big Bore kit, taking it up to 1688cc should you wish to beef up your 96. 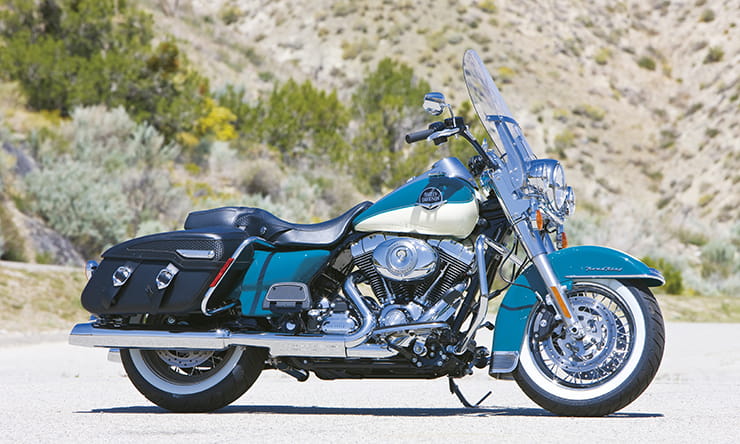 The 2009 update was very significant for Harley-Davidson as they tackled an issue that many had criticised on their bikes – handling. To do this, the Road King featured an all-new frame and swingarm as well as altered wheels, tyres and suspension. Constructed in a single-spar, rigid backbone design, Harley claimed that the fact it was now robotically-welding the frame gave it outstanding accuracy, improving alignment. In addition, the new design used 50% fewer parts than before and the welds were 50% shorter as a result. Impressively, thanks to eliminating bent frame tubes and T-studs and replacing them with cast and forged node-tube joints, the frame’s overall stiffness was increased by 20%. This, aligned with a new 60% stiffer swingarm and separate bolt-on subframe, gave the Road King an overall chassis stiffness up 67% when compared with the outgoing model, however its geometry remained the same. Harley also lowered the gearing, using a 68-toth rear sprocket from the previous 66-tooth item. 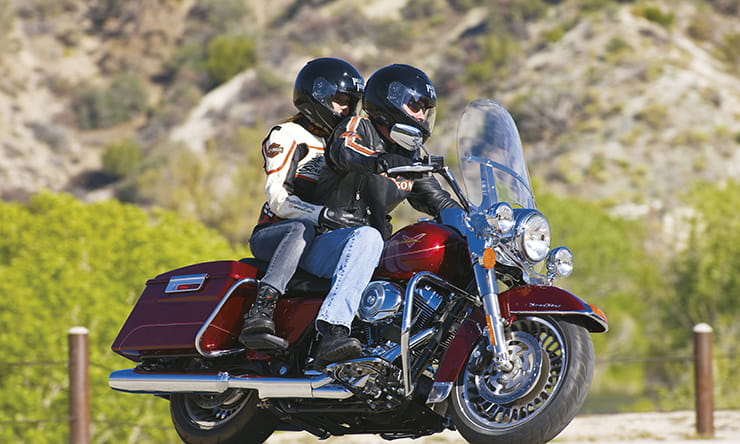 The 2009 Road King featured a larger 17-inch front wheel (except the Classic, which retained a 16-inch item) with the rear a 16-inch item. Constructed from cast aluminium, these wheels were both stiffer and lighter than before and shod in Dunlop Multi-Tread tyres that we designed specifically for the new chassis. The forks are 41.3mm non-adjustable units while the twin shocks feature air-adjustment.

Brakes have never been a strong point for Harley-Davidson and while the Road King does get twin 300mm discs at the front and a single one at the rear, as well as four-piston calipers all-round, they aren’t overly fierce in their performance. ABS comes a standard.

Aside from fitting ABS as standard, you may be surprised to learn that the 2009 Harley models actually came with an Electronic Throttle Control (ETC). This system eliminates the throttle cables connecting the throttle and throttle body, so is a ride-by-wire system called another name.

Relaxed, comfortable and set for mile and after mile, it doesn’t get much more comfortable for the rider than on a Road King. Touring bliss…

If the rider is sat in the lap of luxury, so is the pillion. The Road King is just as cosseting for the passenger as the rider, a great pillion bike that can be made even better through a sissy bar. 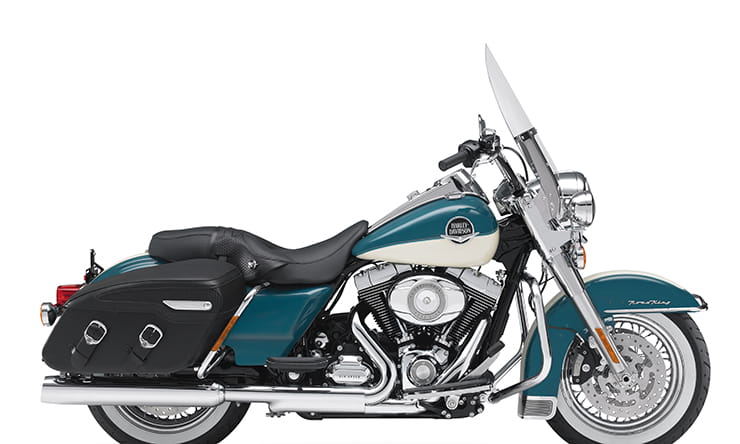 The Road King looks timeless because the USA Harley-buying market wants them that way. But in fact – and you have to trust us on this – Harleys do get upgraded with modern technology. Well, as modern as Harley can be.

One such case is Harley’s touring family. In 2009 they all got a major upgrade with a new frame and tweaked suspension. One such bike bestowed with this is the all-time favourite Road King.

True to its word, the Road King doesn’t look any different at first glance apart from some different, deep and groovy covering paint – love the two-tone blue/white finish. Proof of the changes is the way it rides. Thanks to the new frame and revised engine mounts, the Road King feels 99% better on most pothole-strewn roads America cared to throw at us. The missing last percent is acceptable given that you have to be riding at a good lick to get out of shape of sorts. It was no surprise to note the rear suspension is still set for comfort and easily caves in when hitting big bumps/holes to punch you straight up the chuff-tube. Pumping up the air-charged shocks makes a difference but this is supposed to be for fully laden touring duties. Maybe Harley might figure out that standard settings are complete poo. One day.

As a touring bike the Road King does it in complete style. Dressed in old-age clothes the bike draws admiring looks everywhere; yes, stationary or rolling. The high bars and comfortable footboards (bit of a stretch to be truly comfortable if under 5ft 8in) place you in a world of satisfying peace and comfort. The addition of a genuine all-American QD screen is worth it on longer runs. The brakes are still hopelessly weak and you sometimes wonder if the ABS will wake up because of it.

Then there’s the engine, all 1584cc of it, or rather 103ci. Delightfully charismatic and capable of pulling some weight most of the day. To be truthful it could do with some more cubes to make hills less asthmatic in delivery and make the top end cruising a little more relaxed. It has six gears but top cog is overdrive that translates as overkill. 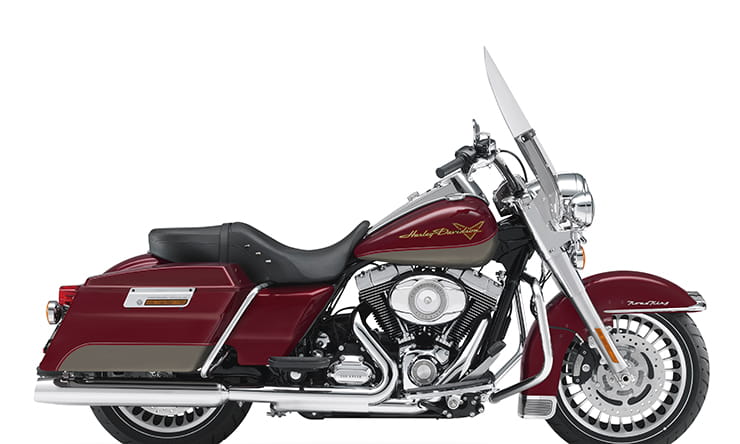 To the casual observer, the current Road King looks identical to the older Road King, however when you ride the two bikes back-to-back you really spot just how improved the latest generation of Milwaukee-Eight-engined bikes are. But that’s not to say the older model should be ignored or passed over.

The bare bones of the Road King remain unchanged. This is a wonderful tourer with all the classic charm and soul you would expect from such a bike. On a sunny day, with the big V-twin thumping away below you, it doesn’t get much better. Yes, the new motor makes more grunt, but that’s never really been a selling point for a Road King. Yes, it is also considerably more refined, but who doesn’t like a bit of vibration in their Harley? And yes, the updated model handles and stops better. But you are riding a Harley-Davidson, what’s the point in rushing around? Don’t rely on just the front brake, use plenty of rear as well and you can mask over the King’s terrible stoppers. For taking it easy and just enjoying the ride, an older generation Road King still rules the roads. 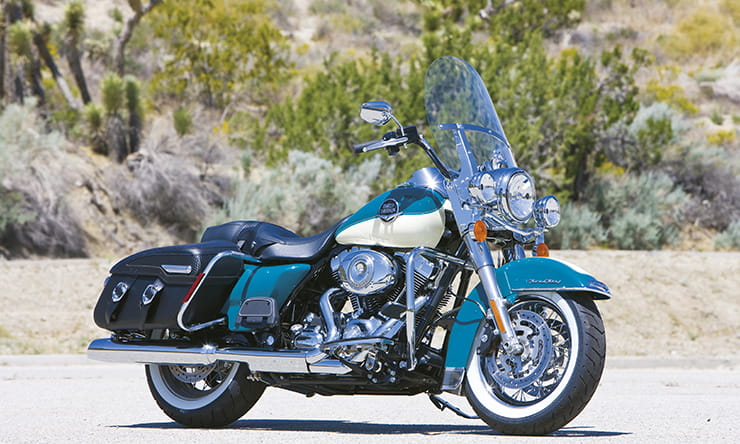 The first thing to look at on a Harley is its condition as that tells you just about everything you need to know about the bike. If it has no pitting in its chrome and everything appears lovely and polished, you are onto a winner. A tatty Harley takes a lot of money to recover, so always buy a good condition one.

If the bike has spoke wheels, inspect these very carefully as rust can build up where the spokes meet the rims due to water collecting, and also check the shocks. A lot of owners over-pressurise the air-damped shocks, causing them to fail. That said, just as many owners fail to keep them topped up, so it’s a bit of a lottery. Check they still offer some support...

Service history is a key factor in owning a Harley and in general, most come with a full service history. They are a relatively cheap bike to run, but at 50,000 miles the head bearings etc need stripping and re-greasing and the forks serviced, which is a big bill. Every two years Harley recommend a brake fluid change, but this doesn’t add much to the costs. Always check the condition of the drive belt as it takes about five hours to change. In general, a belt should last at least 50,000 miles.

Accessories are a key part of buying a used Harley and official Harley extras are welcomed by buyers and do add to the bike’s value. Louder pipes and a free-breathing air filter are pretty much standard fitment on all used Harleys, but some owners go even further with big-bores, paint etc.

It is worth considering that buying a used bike from an official Harley dealership means you get a year’s manufacturer-backed warranty on bikes that are less than ten years old (sometimes this is extended to older machines), which does take some worry out of what will be an expensive purchase.

An update in 2012 saw the Twin Cam 103 motor introduced, but this was a small tweak. The Road King received the new Milwaukee-Eight 107 motor in 2017, which replaced the old Twin Cam 96 engine. The Milwaukee-Eight comes with four-valves per cylinder instead of the Twin Cam’s two-valves and increases torque by around 10%. As well as an air-cooling system, the Eight features an extra vibration-reducing balancer shaft and lighter clutch action. Alongside the new motor, Harley gave the Road King updated Showa suspension, twin shocks with conventional remote preload adjustment instead of air-adjustment and a general update and revision to its chassis. The look, somewhat unsurprisingly, remained the same…