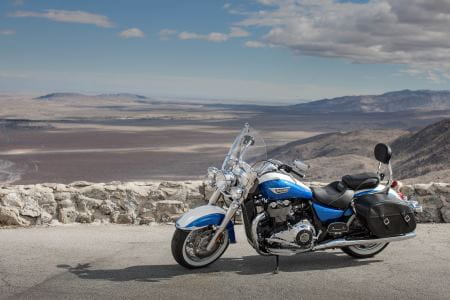 It’s a sign of how seriously Triumph are taking their latest attack on the US cruiser market that when the Hinckley firm wanted to give their Thunderbird LT modern radial tyres with a classical white-wall look, and discovered that no tyre manufacturer made such a thing, rather than abandon the idea they teamed up with Avon to develop the world’s first white-wall radials.

The retro-look rubber adds a finishing touch to the LT — short for Light Touring — whose resemblance to Harley’s Road King Classic is totally intentional. The Brit bike’s engine is a 1699cc parallel twin rather than a V-twin. But with its screen, panniers, footboards, big fenders and lashings of chrome, this latest Thunderbird is targetted very precisely at a distinct and popular niche in the cruiser market.

That dohc, eight-valve engine is borrowed from the Thunderbird Storm, and is mechanically unchanged, though updated with revised injection system and exhaust. Maximum power is a respectable 93bhp but the main feature is the hefty 111 ft.lbs of torque, which is produced at just 3400rpm. 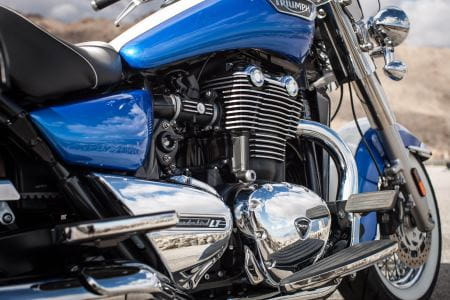 Most changes are in the chassis, where the new steel frame is designed to allow a seat that is low but also thickly padded. To improve comfort Triumph designed a lumbar support pad of different density foam, and added new rear shocks with dual-rate springs, the softer coils hidden by chromed shrouds.

The LT is certainly a classy looking and nicely finished bike, and it works as well as you’d expect of a Hinckley Triumph, albeit one that is designed mainly for American consumption and weighs a hefty 380kg with fuel. That Thunderbird motor is very grunty, pulling from low down (there’s no tacho in the tank-mounted instrument panel) and cruising effortly with a pleasantly smooth and laid-back feel. It sounds slightly more involving, too, thanks to a new flap in the exhaust.

Handling combines stability with a neutral, precise steering feel. That made the bike fun when the Californian launch headed into the twisty hill roads near San Diego. Shame the LT’s footboards scraped long before those white-wall Avons reached their grip limits, but at least the boards have replaceable scrapers. There was plenty of stopping power too, thanks to four-pot Nissin front calipers with ABS as standard.

The most impressive aspect of the LT chassis was arguably its comfort. Ride quality was excellent thanks partly to those dual-rate shocks. And the seat’s lumbar support really worked, acting like a mini back-rest. Sat gripping the wide, raised bars behind the surprisingly effective screen, the T-bird felt well up to using its range of getting on for 200 miles. 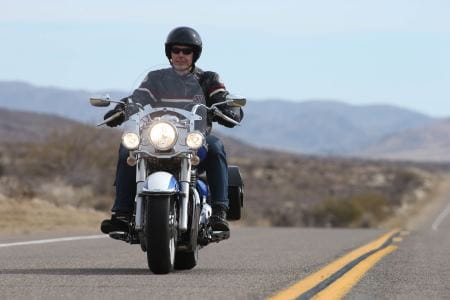 In its own way it’s impressively versatile too. Unclipping the screen and removing the leather panniers (which takes a couple of bolts for each) would leave a very different looking but equally stylish bike for shorter trips. At £13,999 in blue/white or red/black the LT is hardly cheap, but it’s over £4000 less expensive than a Road King Classic with two-tone paint, and is proof that the Brits can build American style tourers too.