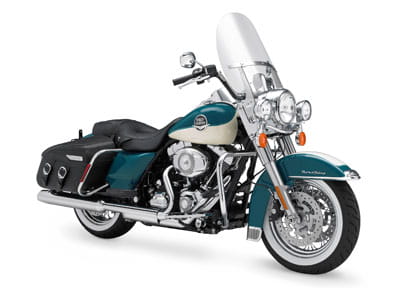 Classic. Timeless. Epitome of a custom touring machine… you’ve heard all the civilised ways to describe a Harley touring machine and most of them are correct. Except they only look timeless because the USA Harley-buying market wants them that way. But in fact – and you have to trust us on this – Harleys do get upgraded with modern technology. Well, as modern as Harley can be.

One such case is Harley’s touring family. In 2009 they all got a major upgrade with a new frame that is something akin to 100% stiffer in all planes and tweaked suspension. One such bike bestowed with this is the all-time favourite Road King.

True to its word, the Road King doesn’t look any different at first glance apart from some different, deep and groovy covering paint – love the two-tone blue/white finish. Proof of the changes is the way it rides. Thanks to the new frame and revised engine mounts, the Road King feels 99% better on most pothole strewn roads America cared to throw at us (plenty, along with lashings of overbanding and overfilled repaired holes).

The missing last couple of percent is acceptable given that you have to be riding at a good lick to get out of shape of sorts. It was no surprise to note the rear suspension is still set for comfort and easily caves in when hitting big bumps/holes to punch you straight up the chuff-tube. Pumping up the air-charged shocks makes a difference but this is supposed to be for fully laden touring duties. Maybe Harley might figure out that standard settings are complete poo. One day.

As a touring bike the Road King does it in complete style. Dressed in old-age clothes the bike draws admiring looks everywhere; yes, stationary or rolling. The high bars and comfortable footboards (bit of a stretch to be truly comfortable if under 5ft 8in) place you in a world of satisfying peace and comfort. The addition of a genuine all-American QD screen is worth it on longer runs. The brakes are still hopelessly weak and you sometimes wonder if the ABS will wake up because of it.

Then there’s the engine, all 1584cc of it, or rather 103ci. Delightfully charismatic and capable of pulling some weight most of the day. To be truthful it could do with some more cubes to make hills less asthmatic in delivery and make the top end cruising a little more relaxed. It has six gears but top cog is overdrive that translates as overkill.

+ points – classic looks. Excellent perch to view the world at 65-70mph. Admired by many

-  points – bit gutless with load and hills. Brakes could be from the last millennium