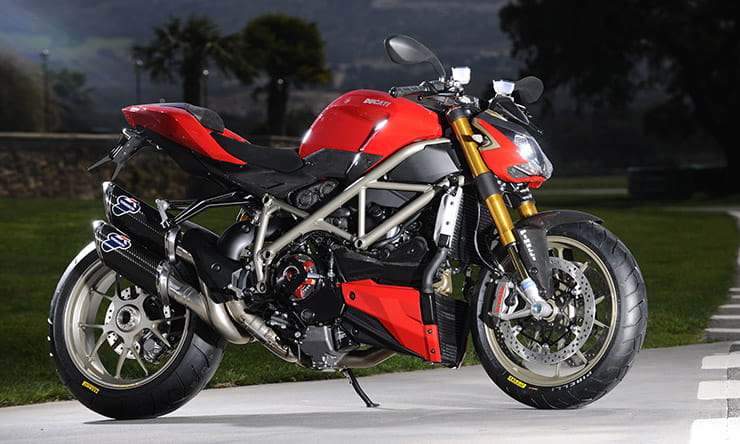 The Ducati Streetfighter is a true Marmite bike in more ways than one. Some riders love its stripped back look, others think it resembles a crashed 1098 that has been bodged together in a back street garage. But its ability to split opinions extends even further than purely its aesthetics, this is a bike whose ride will either leave you frothing at the mouth for more, or cursing the day you ever threw a leg over it. Honestly, it is that divisive.

On the face of it the Streetfighter should tick every super naked fan’s wish list. The engine is essentially the same as the 1098’s with the slight drop in power due to airbox modifications rather than the dreaded re-tune. The chassis is also superbike derived (albeit with a longer swingarm) and so is the suspension. What’s not to like? Attitude, and for some riders the Streetfighter comes with far too much aggression.

With a name like Streetfighter it is hardly surprising this Ducati is a bit of a fighter, but for some it is simply too much of a beast. There is no denying the 155bhp V-twin packs an almighty punch for a naked bike, and has a fairly brutal throttle response, but what do you expect? Refinement? If that's your thing, don’t bother looking at the Streetfighter.

This is a mean and nasty Ducati that delivers a wild ride. It’s not practical in any way, shape or form, but it is bloody good fun to ride thanks to a storming engine and thoroughly sorted chassis. If this sounds like your kind of bike, give the Streetfighter a blast. If not, then avoid it and buy something like a Monster that is still naked, but considerably more refined.

The Streetfighter has no major issues as the Testastretta Evoluzione was thoroughly tested in the 1098 before being transplanted into the naked bike. That said, the very fact it is a naked does throw up a few annoyances. In general Streetfighters don’t see a lot of miles, especially not in winter, but a lack of care can see the engine start to look a bit tatty. The major concerns with a Streetfighter come from this lack of use. The Öhlins suspension on the S doesn’t like to be sat around unused and can pop seals in protest while a battery that is left too low on charge can lead to damage to the sprag clutch. Over-tightening the fork pinch bolts and the swingarm’s pinch bolts can cause cracks, so check these areas well, and as with any Ducati a full service history is fairly vital. Ducati sold Termignoni twin stacked pipes for the Streetfighter, which cost a fortune new and are around the £800 mark used, so if you want some boom in your Streetfighter, buy a bike with them already fitted as it will work out cheaper. Other than the basics, also watch out for aftermarket extras. Items such as a replacement clutch slave cylinder are good as the standard one is heavy and can weep, but too many gaudy extras can actually devalue the bike. If it isn’t in the Ducati performance parts catalogue, generally it isn’t worth having.

The Streetfighter was sold in two forms, the standard model and the uprated S version. Both bikes share the same engine, so make identical power and torque figures, but the S gained Öhlins suspension front and rear over the stock bike’s Showa units as well as five-spoke forged wheels instead of the stocker’s 10-spoke alloy items. It also gained the all-important Ducati traction control system and data analyzer. Neither Streetfighter model was never substantially updated throughout their life span and were dropped from Ducati’s model range in 2012 – just when the super naked craze started to really kick off. Doh! 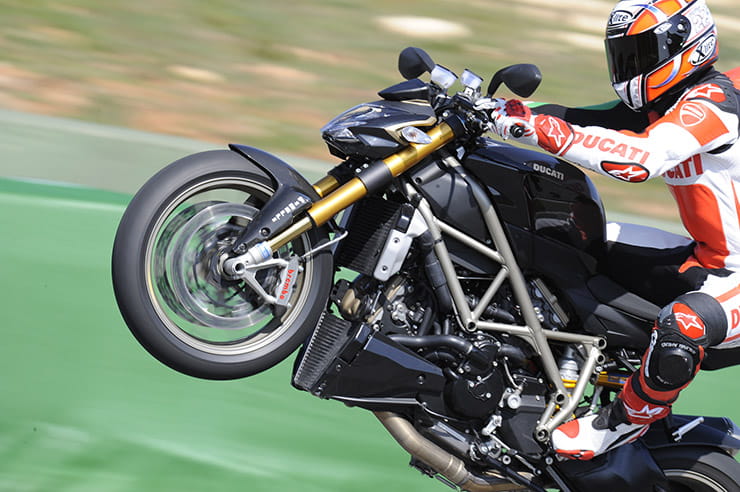 When it was launched, the Streetfighter cost a hefty £13,995 with the stocker weighing in at £11,495, which was a tremendous amount of money and, as a result, used prices remain high. An early standard model will set you back in the £7,500 region while a later 2012 model is pushing the £9,000 mark from a dealer. Prices for an S, which is actually rarer than the standard bike, start at £8,500 and will clear £10,000 for one of the last ones in a Ducati dealer as buyers seek out the uprated electronic systems the S comes with. The problem with the Streetfighter is that not only are super nakeds now fashionable, pushing used prices up, in general they cover very low mileages and that also adds to their used value.