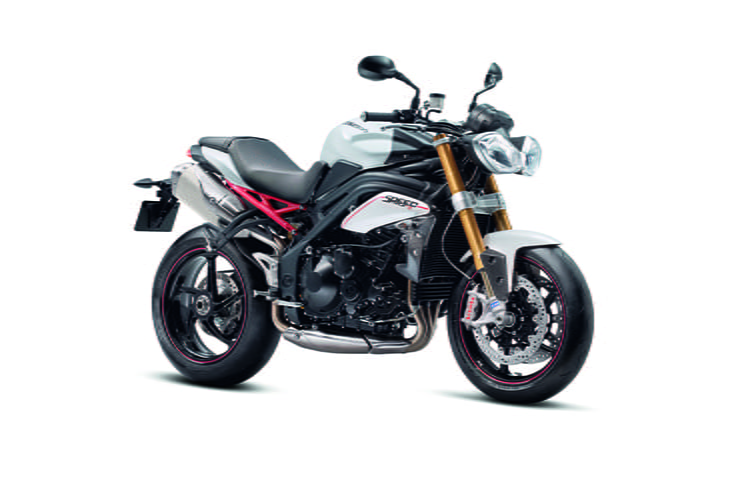 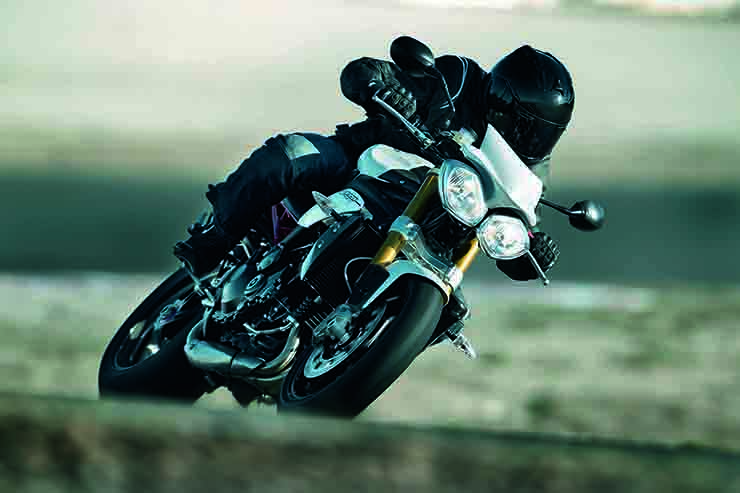 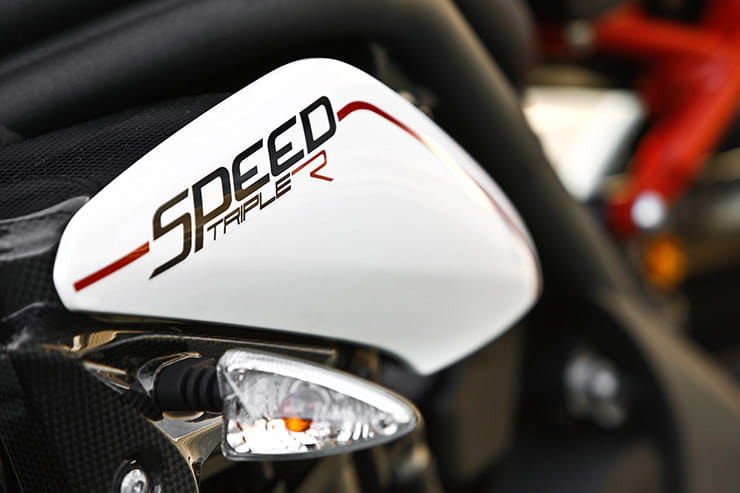 The Speed Triple has formed the foundations for Hinckley Triumph’s success since its introduction in 1994 and is a hugely popular model, however it took until 2012 for the British firm to push the boat out and deliver what so many fans were already creating in their own home garage – an R spec version.

Taking the stock bike as a base, Triumph followed a tried and tested route by adding top-notch Öhlins suspension in the shape of NIX30 forks and a TTX36 shock alongside Brembo monoblock brakes, forged PVM wheels and a smattering of carbon fibre here and there all off-set by a red subframe to signify its status as an R version. The Speed Triple R was born.

There is a reason why the Speed Triple is such a popular machine and it is nothing to do with outright power figures. In a world where some super nakeds make over 160bhp, the Triumph’s more modest 135bhp may seem a little lacking, however as owners will testify, that isn’t an issue at all. By arming the Speed Triple with a three-cylinder motor that packs bags of grunt, Triumph’s naked is far more a roadster than a full-on super naked and that makes it wonderfully suited to road riding and a real charmer. You simply can’t ride a Speed Triple without returning with a huge grin on your face. And with the R version this grin is even wider as it adds a lovely sporty edge without overstepping the mark.

Despite its racing background, Öhlins suspension isn’t just about lap times, on the road it also adds a higher degree of refinement and adjustability, meaning that you can set the R up perfectly to your own needs and riding style. Do this and alongside the R model’s lighter wheels, it is more than a match for sportier super nakeds in terms of its chassis’ performance. But it isn’t perfect.

Like all older Speed Triple models, despite some modifications to its design through altered internals the R’s gearbox is still a disappointment. Clunky, unwilling to work with a quickshifter and occasionally failing to engage when pushed hard, it is a small blot on what is otherwise a really cracking bike. If you are after a sporty naked that has bags of charm but is more than happy to be ridden at road legal speeds, the Speed Triple R is well worth considering. It’s just a bit of a shame its price tag is still fairly high, but exclusivity never comes cheap… 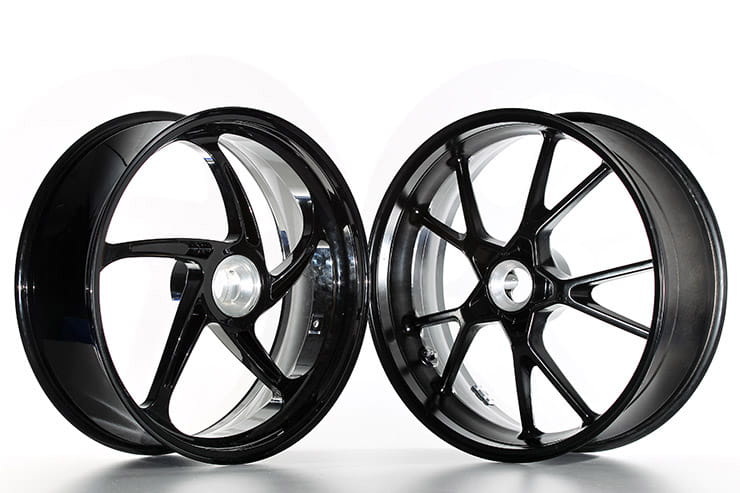 If you are serious about owning a Speed Triple R then you have to search out a first generation (2012) bike as Triumph were a bit sneaky on later models and actually replaced the flashy PVM forged aluminium wheels for more basic cast items. The issue is that unless you knew this, you may very well buy an R and assume it will be the original model’s spec. The PVM wheels are marked PVM but also have a different spoke pattern when compared to the stocker, so look for the five ‘bendy’ spoke design over the Y-spoke of the stock wheels. The lightweight wheels save 1.7kg in weight over the stock units and provide a very noticeable upgrade to the bike’s handing, so are well worth having.

With the wheels sorted, turn you attention to the R’s suspension. Öhlins suspension is extremely high quality, but it doesn’t like to be stood around unused. Always inspect the fork seals for leaks by bouncing them a few times and then wiping the seal area with some kitchen towel to highlight any fluid loss. It is quite common for them to weep and then seal again after a few miles of riding, but as a rebuild is around £200 you may want to factor this cost into your offer. The shock is more robust, but again, always check for leaks and assume around £150 for a rebuild if necessary. ABS was an optional extra, so if you want it you will have to search out a bike with it fitted, which could make your task even harder.

Onto the mechanics and despite its upgraded gearbox, the Speed Triple R is still as clunky as heck and if you add a quickshifter there is an increased risk of damage. It is best to avoid any bikes with a shifter fitted or remove it after purchase. As with all Speed Triples, check the eccentric adjuster on the hub isn’t seized and also the suspension linkages look like they have seen some grease in the last few years (they should be stripped and regreased every 12,000-miles). Getting the throttle bodies balanced is a good thing to do on a Speed Triple, but again this is often missed by owners who take the bike to a non-Triumph approved workshop, so look at the bike’s service history.

When it comes to accessories, official Triumph mods such as the Arrow exhaust system (either twin underseat or the Low Boy are worth holding out for and as they are no longer produced, so you will need to buy a bike with them already fitted. Not only do they boost the mid-range, they also sound ace – just make sure the ECU has had its fuel map updated to suit. 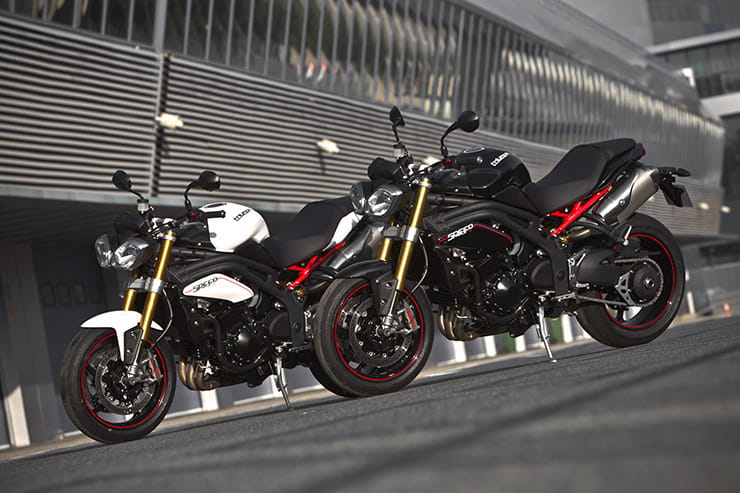 This generation of Speed Triple R ran from 2012 until 2015 and although it wasn’t technically updated as such, bikes made from 2013-onwards were actually a lower specification than the first year of production as the wheels reverted to stock cast items from the PVM forged units. The whole Speed Triple range was updated in 2016 with the introduction of a ride-by-wire throttle that added traction control, rider modes and switchable ABS as standard. The engine was also upgraded through 104 revisions with power upped to a claimed 138bhp and the gearbox’s action vastly improved (it can happily take a quickshifter). The 2016-generation comes in stock S form or the high-spec R, which boasts Öhlins suspension and a few bits of carbon bling instead of the S’s Showa units. 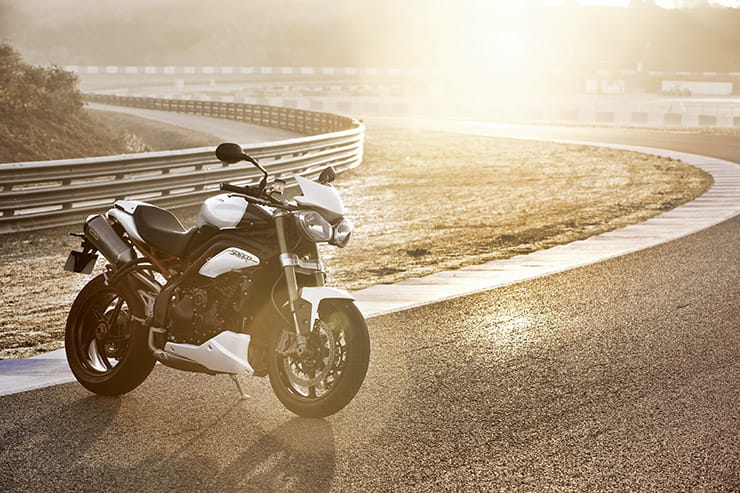 Where prices for a 2012 stock Speed Triple are in the £5,000 - £6,000 area, you will need to fork out closer to £7,000-£8,000 for an R as they are surprisingly rare in the used market. Also, due to the fact that the specification dropped in later years, it doesn’t really matter if it is a late or early model R, they are all roughly in this price range. 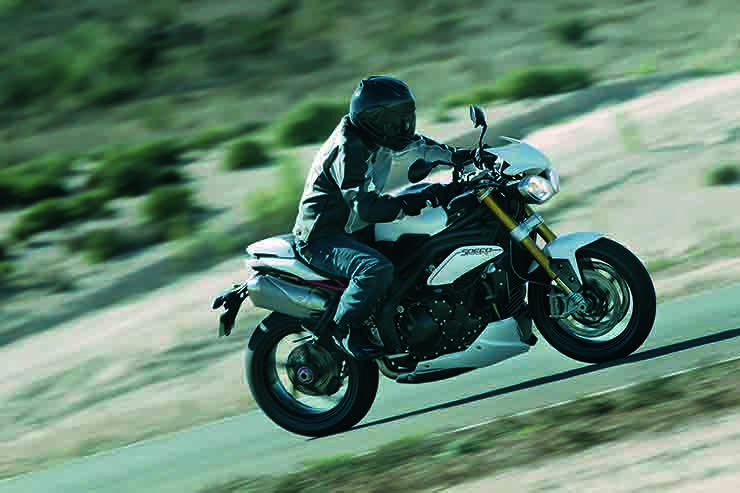 There is a dedicated Speed Triple forum at www.thespeedtriple.com and www.thetriumphforum.com is also a good resource alongside www.triumphrat.net. If you want to speak to a very knowledgeable dealer, drop Jack Lilley Triumph (www.lindtriumph.co.uk) a line.