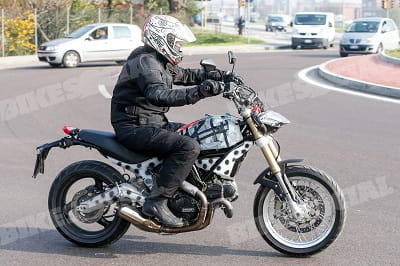 This is Ducati’s new Scrambler, a bike the firm hopes will continue Ducatisti's love affair for air-cooled bikes and reignite the famous Scrambler name of the sixties.

The heavily-disguised Scrambler was spied leaving the Bologna factory in Italy and shows that despite a new liquid-cooled Monster 821 on sale in a few months, the firm are keen to keep the air-cooled legacy going.

Bike Social believes the Scrambler has a version of the Monster 796 air-cooled engine fitted along with an all-new frame. But don’t get too excited yet, as it’s a rough prototype right now and production versions aren’t expected to go on sale until 2015.

You can see from the pictures that the Scrambler uses an all-new swingarm not shared with anything else currently in the range. 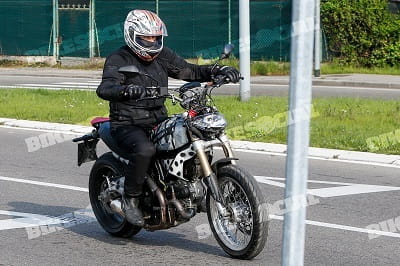 Don’t be fooled by the styling either, beneath that gaffa tape and spot disguise sits a tiny, stubby, playful scrambler style bike that will spark a new range for Ducati.

The high bars are one giveaway of its Scrambler roots, along with that slender, disguised retro-classic dirt bike style tank. The prototype's headlight is chucked on from the parts bin, but expect to see a round headlight when the bike is finished. It has been dressed down to make it look more humble commuter, but expect to see some semi-knobbly road tyres too.

Insiders say that Ducati will take inspiration for the bike’s styling from the original Scrambler of the sixties and that was a stripped back lightweight bike, and still a classic shape today. As the Monster 821 gets more technologically advanced with traction-control and water-cooling, the Scrambler and the new range it sparks will take on a simpler style. 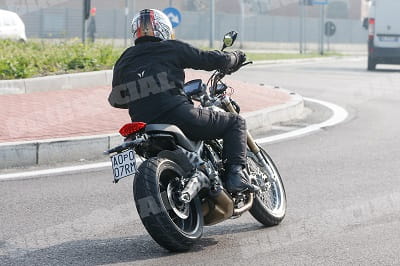 Ducati made the Scrambler name famous between 1962 to 1968, but that was powered by a single-cylinder motor ranging from the entry-level 250 single to a thumping 450. However, the bikes are still popular today with classic fans and collectors. Bringing back the name Scrambler will enable Ducati to launch a host of spin-offs including branded merchandise, accessories and potentially even separate events.

Triumph has seen steady sales of their Bonneville-based Scrambler since its launch in 2006, so it will be interesting to see how the Ducati fares against the British-built bike in the showrooms. Triumph are also expected to be working on a replacement for this model when the Bonneville is updated and relaunched in 2015.

BMW has also seen massive sales success with the retro-styled RnineT. The £11,000 bike was built to celebrate 90 years of BMW. It's designed to be easily modified with a host of accessories and cashes in on the whole ‘Beard Shed’ modifying bikes scene right now, except for a man not prepared to get his hands dirty in his own shed. The RnineT has been a runaway sales success for the German firm. One dealer told us that is you order one now in the UK it won't be deliverred until next July, such has been the demand.

The idea of a retro Ducati is of course not new. Ducati brought back the idea of a retro-styled air-cooled bike firstly with the limited-edition MH900e, and then back in 2006 with the Sport 1000 and the GT1000, but they didn’t sell well in the UK at least.

In fact, one UK Ducati dealer told me that they couldn’t give them away when the bikes were dropped from the range in 2010.

However, the new customised and retro scene in vogue right now means those same bikes are very much in demand, with a decent Sport 1000 fetching around £10,000 to £11,000 secondhand, matching the price they cost when new!

Expect to see the Scrambler launched at the end of this year.

Note: Sorry. These pictures feature Bike Social's logo so that unscrupulous websites don't steal them from us! You know who you are...