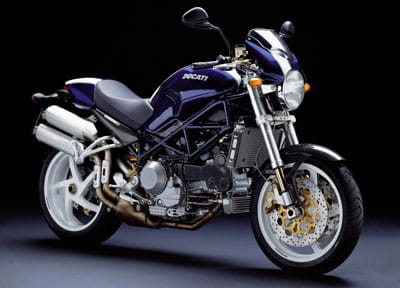 Ducati might well have the best V-twin engineers behind its Bologna factory doors, but it also happens to have a brilliant planning and marketing team. How else do you explain Ducati getting away with dotting its Monster class with former sports bike engines that happen to be liquid-cooled when the Monster range is synonymous with air-cooled engines?

Not that we, or fans of air-cooled Ducati’s, should be too bothered about what engine is used because the S4R is arguably one of the best Monsters to roam this planet. This statement can be based on the fact there is a stunning former 996 eight-valve superbike engine punching out gobbets of torque and power to the rear tyre, itself neatly splayed across a sexy curved five-spoke dished rear wheel. This wheel is then mounted on an eccentric hub attached to Ducati’s signature single-sided swing arm.

Yes, the Monster S4R is endowed with serious power and even more torque than ever before. It can also punch its way to 140mph in a neck wrenching matter of seconds (not that we would condone that of course!). But more than this, it can also be ridden just as easily in a sedate manner to grab an amazing 50mpg, and why not? An S4R owner will still feel they own something special knowing that a simple twist of the wrist is all that’s needed to cut up rough.

The most important reason for not caring what engine is held within a Monster’s tubular steel trellis frame, is that you can see the exposed engine, which is part and parcel of the Monster’s make up. Another important part is the overall silhouette…

A Monster has to look like a Monster to be a Monster. Like Frankenstein’s monster has to have scars and bolts to be recognised, Ducati’s Monster has to have a hunched appearance, like a sumo wrestler ready to rock. Flat bars, raised tank and swoopy tail are what made the Monster and the S4R holds true to this minimalist design ethos. Get the suspension set right and a humble Monster turns into a comfortable and corner decimating Monster capable of kicking sports bike butt.

Also incorporated into the S4R is the Ducati tradition of sports-like handling and the result is Showa upside down forks that are stiff as concrete and only work on ultra-smooth surfaces. Fortunately a simple reduction in spring preload helps let the damping do its job. Pulling the handlebars further upright also lessens the strain on upper body weight being held by the wrists alone.

+ points – awesome engine performance but extremely usable with it