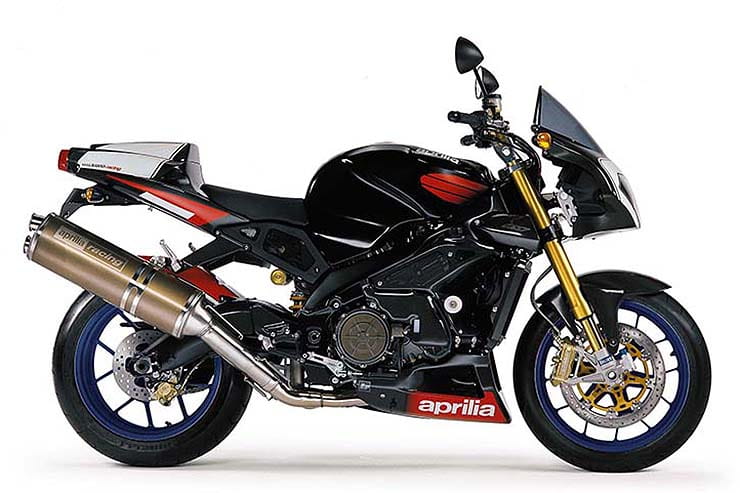 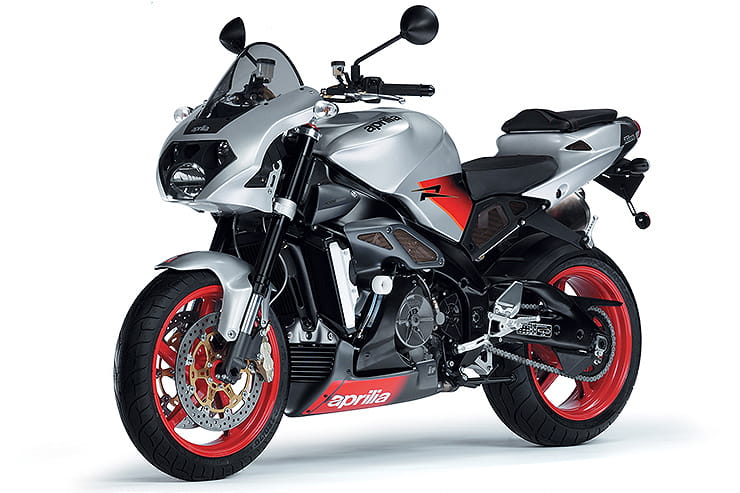 While some credit Ducati’s Monster as being the first super naked, in reality the air-cooled Monster was far more a café cruiser and the honour of kicking off this exciting genre of motorcycle lands firmly at the feet of Aprilia with their Tuono. Italian for thunder, the Tuono is a super naked in the very purest sense of the word as Aprilia basically stripped the fairing off their RSV sportsbike, added a set of flat bars and hey presto, the Tuono was born in 2003. Although some argue it was actually born in 2001 when the ‘Falco Fighter’ was created, but that’s a whole new story. Nowadays an original generation Tuono makes for an absolutely brilliant used naked bike that as well as a bargain price tag comes with a high spec and bags of fun. It’s mad, hysterical to ride and yet also remarkably practical. What’s not to like?

As is always the way with Aprilia models, they are generally under-valued in the used market and you can grab an early Tuono for just under £3000 that will be in decent condition. There are a few bikes for sale for under this but you might as well get a good one. If you can stretch to £3500 you can secure a beauty in a dealership while £5000-£6000 will get you the all-singing Racing model, which is a very desirable bike – but more on this model later...

Where some manufacturers de-tune their sportsbike motor for the naked bike, Aprilia didn’t bother and you get a full-on RSV V-twin with a claimed 128bhp and 76lb-ft of torque, which although sounding a little lacking in modern terms, is more than enough for road riding. Due to its narrower V-angle, Aprilia’s V990 motor is far less lazy feeling than Ducati’s 90-degree V-twin and it is a really spirited engine with bags of stomp. Although you do need to ensure it has had its throttle bodies properly balanced or it can be a bit brutal on initial throttle-pickup, once up and running it is a great motor and a real hoot to ride. Power wheelies (a lot of owners reduce its gearing by adding two teeth to the rear sprocket) in the first two gears are on the cards and when you let it stretch its legs it is remarkably quick. In 2003 it was quite a shock to the system and nowadays it remains brilliant fun to ride.

The original generation of Aprilia’s V-twin motor is called the V990 where the updated one as found on ‘twin-pipe’ models is the V90RR (or magnesium) motor, however generally what applies to one twin applies to the other. As on any big twin, the sprag clutch is a weak point on the V990 and a low-charge battery can cause it to become damaged, so always listen out for a squeak when the starter is pushed. Sprag clutches can be changed, however a lot of work is required to access it and the bill is around £400. Upgrading the battery to one with a high CCA is recommended as is the use of a battery trickle charger to ensure the starter gets the full whack of energy. Cam chain tensioners can become noisy if the bike isn’t ridden regularly and if used hard on track the fairly poor OE clutch, which has a basic slipper function, can fail to slip, leading to valve damage. Speaking of the clutch... The clutch system is a notorious pain on all V990 motors as it allows air into the fluid, making the bike tricky to get into neutral. You can either bleed it regularly or fit an aftermarket slave cylinder to get over this irritation. A lot of Tuono owners squeeze a bit more performance out of the V-twin through an airbox conversion, which is a good mod as well as cheap, and fitting a ‘scavenger’ exhaust link pipe to fool the motor into thinking it has twin pipes also delivers good performance benefits without compromising reliability. In terms of exhausts, loads have loud pipes fitted (the OE unit is bloody huge and heavy) which can be catastrophically loud, so be a touch wary if you like your neighbours... The Racing model uses a slightly higher-spec V990 motor from the RSV-R, which has larger valves in it, and also comes with a very loud Aprilia Racing exhaust pipe as standard alongside the far quieter road can. The motor requires a minor service every 6000 miles and a major at 12,000 miles, which includes valve clearances. Expect to pay about £400 for a major, which isn’t too bad at all, especially when compared to a water-cooled Monster model. 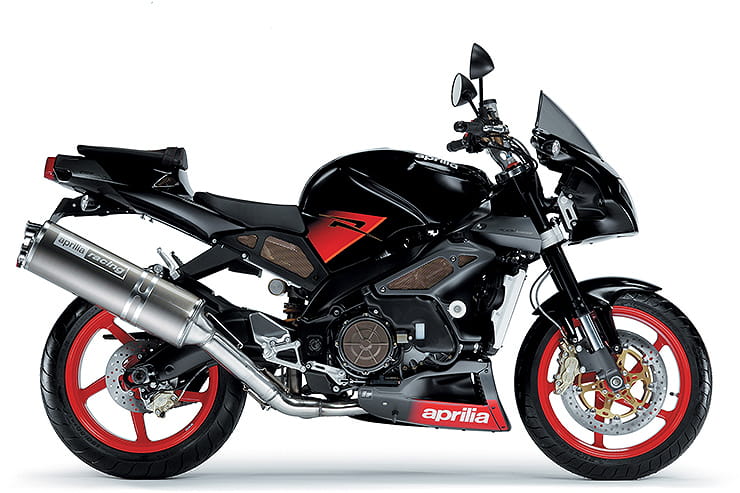 The Tuono isn’t a very thirsty motor and you should be able to average in the high 30s in terms of mpg as while the small front fairing is reasonably effective, you tend to be going  slower than on a sportsbike, improving your economy.

The Tuono has exactly the same chassis and suspension as the RSV sportsbike, just with flat bars fitted, and that means it is properly capable in the corners. Thanks to the huge bars you can really muscle the bike into bends and the upright riding position is also great for seeing far up the road ahead so you can make even more rapid progress. A well-ridden Tuono can happily keep up with just about anything on the UK’s roads and the rider will have a huge grin on their face while doing so. Thanks to its fully-adjustable suspension you have loads of potential to sharpen the Tuono even further and many are taken on track, which they are more than happy to do. Kneedown is most certainly on the cards with a Tuono – although it is quite a long stretch! However there are a few things to be wary of...

Due to its tall seat height, upright stance and poor turning circle, shorter riders can find the Tuono a bit tricky at low speed and a fair few are dropped. Also, the sidestand is terrible, putting the bike far too upright and prone to falling over (swap it for one from an underseat pipe FireBlade to cure this). The issue with a low speed drop on a Tuono is that the pegs and exhaust system has an annoying habit of pushing into the frame/swingarm, denting them and in the eyes of many insurers writing the bike off as non-economical to repair. Always perform an HPI check and inspect the bike well for scrapes in these areas.

Where the stock Tuono has Showa forks and a Sachs shock, the Racing model builds on this with Öhlins suspension and even OZ Racing lightweight wheels. There is a price to be paid as the Öhlins kit tends to require servicing more regularly, however it is a noticeably better set-up for spirited riding and you don’t pay a great deal more to own the Racing model. If you don’t want to spend the extra, you can mix and match between RSV models and many RSV-R parts will fit onto a Tuono. If you are going down this route, a few questions posted on a Tuono or RSV-specific forum will help guide you as to what fits and what doesn’t.

There is no option of ABS on the Tuono but this doesn’t bother owners, it’s just not that kind of bike. You get very impressive Brembo conventionally-mounted four-piston calipers on the stock bike while the Racing ups these to radial in their design. Braided lines are standard fitment on both models and with a set of fresh high-friction pads they are more than good enough for the occasional stoppie or two. Or three. Or four... The rear brake, like the clutch, loves to allow air into the system and stop working. It’s a crap design and re-locating the master cylinder from horizontal to vertical through a set of aftermarket rearsets cures the issue. 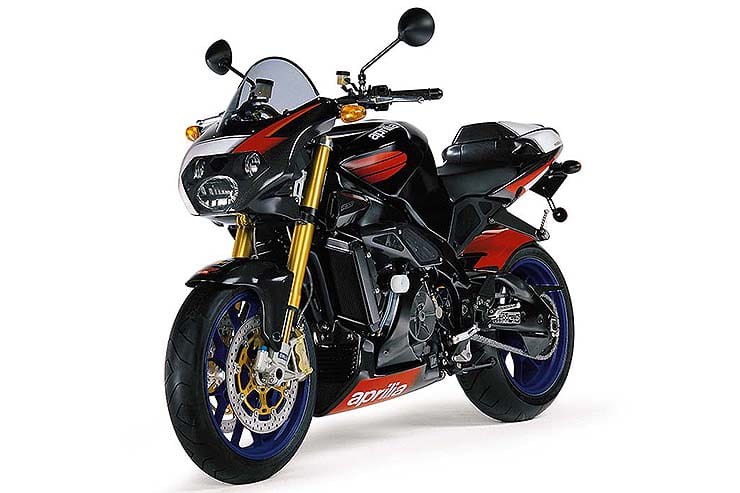 The Tuono may be a naked bike but it is big, roomy and comfortable for riding reasonable distances on, which is quite a surprise. The front fairing (which was added to make the bike more stable at speed...) is pretty good and the tank allows you to slot your knees into recesses to get them out of the wind flow. You can certainly take the Tuono for weekends away and if you don’t mind touring with a rucksack and throw-over panniers, a longer time away is certainly on the cards.

Aside from a built-in lap timer, the Tuono has no rider aids and it is better for it. Accessories, however, well there are a lot... The airbox mod (which removes the top of the OE airbox and instead seals the airbox to the lower half of the petrol tank, increasing its volume) allows the V-twin to breath far better and boost its performance, the scavenger link pipe is cheap and delivers on power gains, reducing the gearing makes it even more fun when it comes to powering out of bends, a loud pipe makes it very anti-social and bar-end mirrors mean you can see what’s behind you. Owners also fit new screens, crash protection (a good idea), the Fireblade sidestand, wheel rim tape (ummm...) single seat units, carbon bodywork, stubby levers, tail tidies, the list goes on and on. Ideally, go fairly standard if you can. If you are buying a Racing (the rarer first gen ones have a yellow flash on the nose, on later models it’s white), which has carbon bodywork as standard, ensure you get the race belly pan and nose fairing included as they were all part of the package alongside the race exhaust, uprated suspension and OZ Racing wheels. And, apparently, mesh covers for the tail lights, although these are as rare as hens’ teeth...

The original generation of Tuono is a brilliant used bike with bags of attitude, good reliability and a very cheap price tag. It is also a really practical bike that can turn its hand to just about anything asked of it, apart from U-turns in the road. There are loads of passionate owners out there who all love the V-twin Tuono, is it time you joined their ranks? And ideally on the top-spec Racing model...

Three things we love about the Tuono… 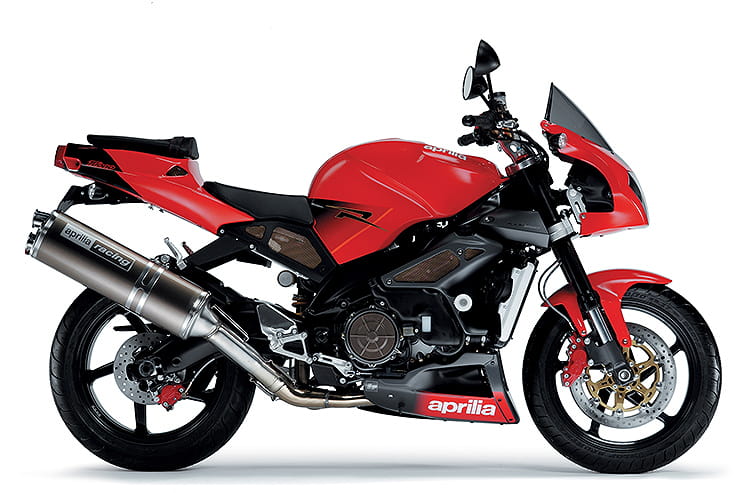