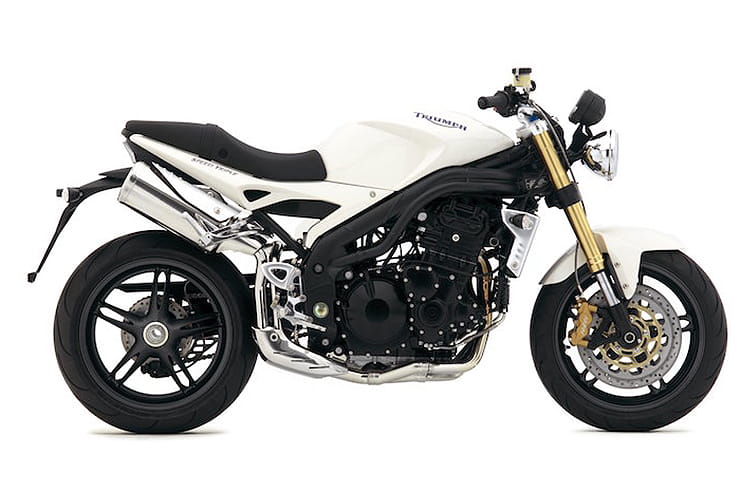 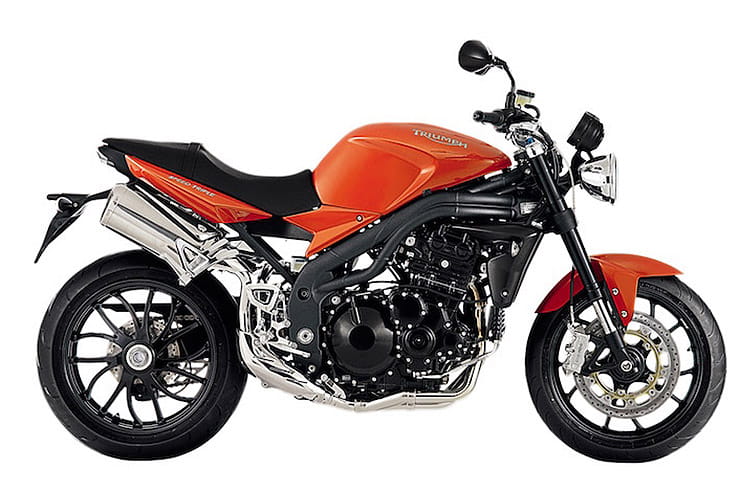 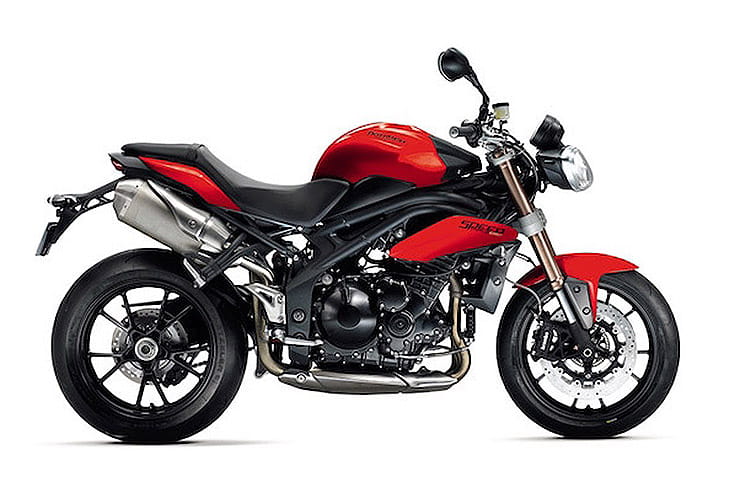 Triumph themselves admit the Speed Triple is probably their most important modern model. The original launched in 1994 and marked the reborn British brand finding its mojo. While its successor, the T509 in 1997? quickly established itself as the class-leading ‘super naked’. But it’s arguably the third-generation machine, the 1050 launched in 2005, which, in being the first designed as a stand-alone bike rather than as a naked version of a Daytona sportster, is the most significant.

With runty, stumpy, aggressive ‘bug-eyed’ styling, a punchy, characterful and potent three-cylinder engine, decent handling and build quality and more attitude than a skinhead demo it was immediately the ‘hooligan bike’ of choice.

This was updated in 2008 with the addition of the ‘bendy spoke’ wheels, black anodised forks and Brembo brakes replacing the troublesome Nissins. The stubby pillion seat was also extended by 20mm and pillion pegs lowered by 50mm.

A higher spec ‘R’ model came in 2012 featuring Ohlins suspension, upgraded Brembo monobloc brakes, forged aluminium PVM wheels and a red subframe for only £1500 more than the stock model, although subsequent Rs came without the PVM wheels. While finally, in 2015 Triumph released a limited-edition Speed 94 and 94R, with new graphics, a few bolt-ons and very cool yellow paint (black was also an option) that harks back to the original 1994 machine.

All these variants and improvements were enough to keep the Speed Triple 1050 on top of the super naked tree until its wholesale revision in 2016 into the Speed Triple S and R. And all remain great used buys to this day – here’s why. 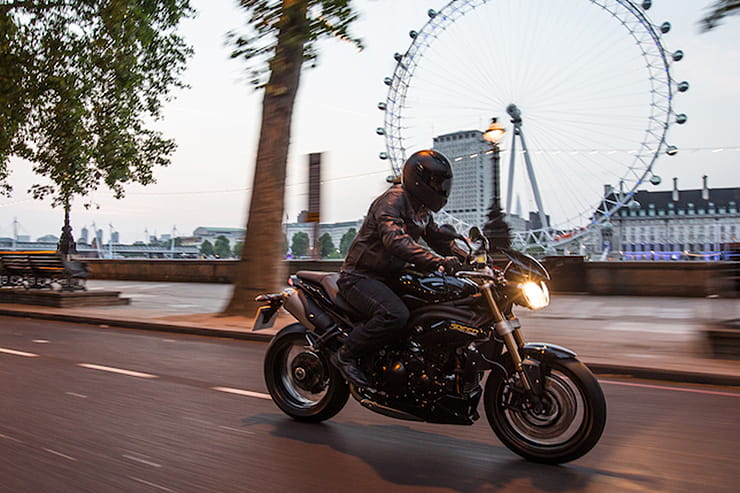 Like most Triumphs the Speed Triple has always filled the ‘upper-middle’ price band between mainstream Japanese and more exotic Italian rivals. The original 1050 in 2005 cost a reasonable £7650 and the latest base version is still well under £12K while used, naturally enough, they’re even better value. Prices start around £3400 for a 2005 1050, but that is at the low end and adding an extra £500 will get you a far tidier example with a lower mileage. The first of the ‘bendy-spoke’ 2008-on models come in at £4000, which isn’t too much extra to pay for a more practical and newer machine, and top out at £5500 which is when prices for the upgraded 2011 bike start. There are a lot of 2011 Speed Triples for sale between £5750 and £6300, which suggests this is the sweet spot for this generation, but to secure an R version you will need to cough up an extra £1000 as their exclusivity ensures they don’t appear for less than £6500.

The engine is very much the beating heart of a super naked and Triumph’s characterful big triple is the very soul of the Street Triple. In truth, it was pretty much lifted straight from the then Sprint ST sports tourer, itself enlarged and improved from the 955i, but it was quickly revealed to work best in super naked form. An initial 131bhp, improved in 2011 to 135, may not sound much, but retuned to give even more torque the ‘Speedie’ produced serious oomph in the midrange, proved a great wheelie bike and all round delivers enough real world road performance to match pretty much anything. On top of that, there’s a curdling, evocative, three-cylinder soundtrack that’ll set the hairs on the back of your neck on end and a reputation for bulletproof reliability that’ll let you sleep soundly at night.

Mechanically the 1050 is very robust as the triple isn’t in a very high state of tune, however the gearbox is notoriously poor and fairly clunky. The 2011 model including the R featured a few internal upgrades which help smooth the changes, but always check on a test ride that all the gears are present and correct. The underseat exhausts are one of the Speed Triple’s most distinctive features and this, along with its evocative exhaust note, means aftermarket cans – or even full systems – are popular replacements. Check quality/legality, however. There are plenty of ‘Not for road use’ systems out there. Triumph themselves also offer a range of officially endorsed systems, including stylish ‘Hi/Lo Boy’ versions. Overall build quality and paint and metal finishes are good, and with most owners being mature used examples tend to get looked after. But there are always exceptions and, with the Speedie being so popular, there are always other used examples you can find… 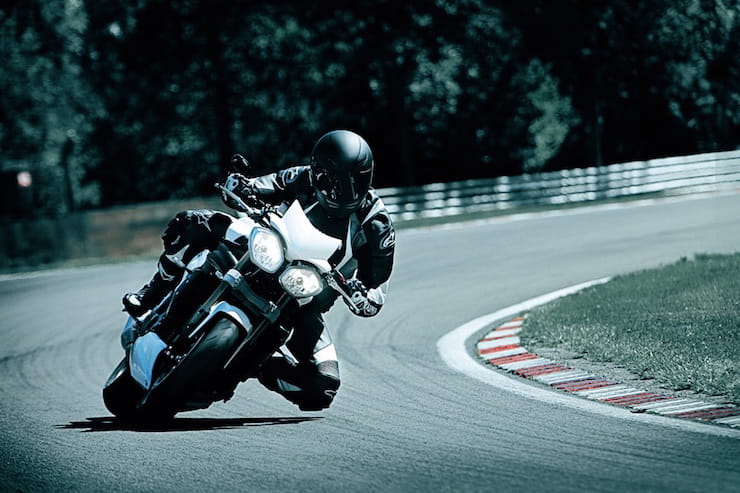 Although derived from what was original a sports bike motor, the Speed Triple is comparatively lower performance and lower revving than your typical sportster four. That said, Speedie’s are often ridden, er, vigorously and Triumphs in general are often quite thirsty. Overall we’d expect mpg figures in the low 40s, which is nothing to get excited about, but with gentle riding that can be improved significantly.

The original 1050, with its short wheelbase, sharp steering geometry and stiff suspension, quickly gained a reputation as a lairy, hooligan. That’s no criticism. As a super naked it offered handling that was almost superbike sharp, albeit a bit on the heavy side. Over time, however, it ‘softened off’ slightly to mature into an all-round brilliant naked bike for road riders. The suspension on early bikes sometimes suffered from poor servicing – at the 12,000-mile service the suspension linkages need to be stripped and regreased or they tend to seize up – and while you’re there, check the single sided swingarm’s eccentric adjustor isn’t seized solid. On the whole, however, there’s little to fear. If you ever want to take a passenger then get the updated 2008-2010 model with its redesigned back end as the very first 1050 (2005-2007) has an absolutely terrible pillion seat. While those who are going naked for the first time after a life on sportsbikes are probably best buying the later 2011-onwards bike as its altered weight distribution makes it the sportier model and less sluggish in the bends. If you want the ultimate Speed Triple, get the very first year (2012) of Speed Triple R as the PVM lightweight wheels were dropped after this point and subsequent models reverted to heavier cast aluminium items with the PVMs an optional extra. 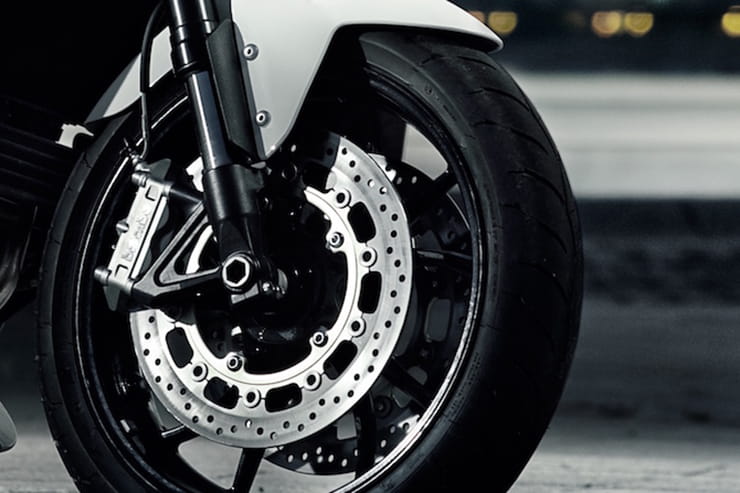 The early 1050 models suffered from their Nissin brake calipers’ pistons seizing, causing the brake to drag and potentially warp the discs. Check this area by getting the front wheel off the ground, spinning it and feeling for a pulsing through the brake lever. While the bike’s front end is in the air, also check the steering head bearings for any roughness - Speed Triples do wheelie very well… From 2008 the Speedie received new Brembo calipers.

‘Comfort over distance and touring…’ are not two motorcycling traits you’d normally associate with a hooligan super naked but in truth the Speed Triple 1050, especially in post 2011 form, is, thanks to its flexible engine, rider comfort and the masses of accessories available for it including wind-cheating fly screens, tank bags and more, a genuinely versatile, roadster all-rounder – which is another reason why it’s become so popular. Sure, it’s no bike for a two-week, two-up touring holiday, but if your demands are less great a weekend away with the missus, or similar, certainly isn’t beyond its abilities.

Although build quality is generally decent (although there have been some grumbles on forums about fork leg corrosion and thin tank paint), up to 2016 (when a new electronics package was introduced along with a host of other mods), the standard Speed Triple was a fairly basic proposition. The 2011 update saw ABS offered as an option for the first time. While 2012’s R model brought Ohlins, Brembos and PVM wheels, as mentioned earlier. But otherwise, if you want rider aids you need to be looking at 2016-on models and if you want goodies you need to be looking at either aftermarket or Triumph’s own genuine accessories. On the plus side, Speedie’s are among the most accessorised bikes around with flyscreen, belly pans, different exhausts, luggage, crash protection, comfort seats, cosmetic tweaks and much, much more readily available. And, with so many out there, it makes sense to go for a bike already fitted with the accessories you want…

The Speed Triple 1050 is not just a Triumph success story – it’s a motorcycling success story as well. While it’s always lagged behind most rival super nakeds when it comes to outright power, the Speed Triple has remained the most enjoyable naked to ride on the road. Yes, it’s a bit heavier than the competition, but the triple engine’s wonderful spread of torque makes it far more relaxed and you simply can’t beat the sound you get from that motor. When it comes to smiles per mile, the Speed Triple 1050 remains simply one of the best naked bikes around. And anyway, if you want a bit more sporting potential there is always the option of the R model…

Three things we love about the Triumph Speed Triple…