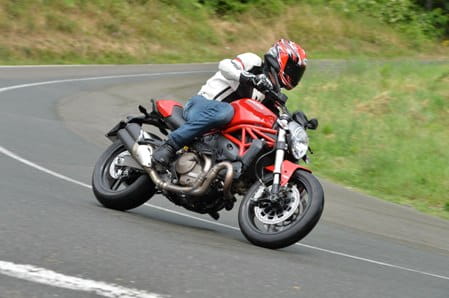 The Monster 821 follows the format that Ducati used earlier this year when they bolted a smaller capacity V-twin engine into their open-class super-sports chassis to create the brilliant 899 Panigale. This time it’s the naked Monster 1200 that gets the down-sizing treatment, and the trick has worked again because the Monster 821 is another outstanding bike.

That was clear on the launch, held on roads near Bologna that included the Futa pass on which Ducati has been developing its bikes for decades. The 821 sounds fantastic the moment it fires up with a V-twin bark that seems even louder and more involving than the 1200’s. And if it can’t match the bigger model’s grunt, it still has plenty of performance, and gains by being slightly lighter and more agile. 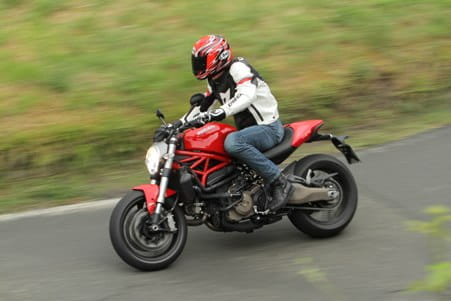 This Monster wasn’t the most difficult project Ducati has ever taken on, because most of the key components were already in use. The 821cc, liquid-cooled Testastretta 11 degree V-twin engine is basically the one introduced in the Hypermotard a year ago.

The dohc, eight-valve unit is mechanically unchanged except for adopting Ducati’s APTC clutch, which has a slipper action and a very light lever feel. A bigger airbox and new exhaust with longer pipes gives a slight boost throughout the range to a 2bhp higher maximum of 112bhp at 9250rpm.

Similarly the rest of the bike is closely based on the recently released Monster 1200, but incorporates a few changes to reduce cost and suit the smaller motor’s lower power output. The tubular steel frame is unchanged but the swing-arm is twin- instead of single-sided, and 30mm shorter than the 1200’s.

The 821 also gets a narrower rear wheel and 180- instead of 190-section rear tyre. It has a relatively simple suspension set-up of non-adjustable 43mm Sachs forks and a preload- and rebound damping adjustable shock from the same firm. The front brake blend of 320mm Brembo front discs and four-pot Monobloc calipers is shared with the 1200 although the 821 gets a different master cylinder. 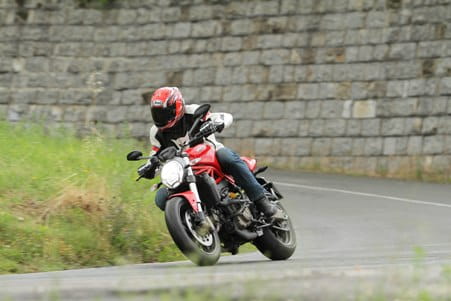 Starting the launch ride in central Bologna gave the Monster the chance to show that it works well in town, helped by its flexible engine, easy handling and low seat, which like the 1200’s can be adjusted for height. The 821 also follows the bigger model in having three riding modes:

Sport and Touring give the full power while Urban smooths response and cuts the max to 75bhp.

Rain started falling just was we reached the Futa, so Touring mode’s softer throttle response was useful, and the DTC traction control worth having too. By the afternoon the roads were dry and we could use Sport mode’s snappier acceleration, and more of the Pirelli Diablo Rosso tyres grip exiting the countless bends. The fairly long-stroke engine has a punchy midrange, a sweet six-speed gearbox, and enough smooth power to put 100mph on the digital speedo quickly with plenty more to come.

Handling was excellent too. The suspension might lack adjustability but the Monster is well set up as standard, and steered with a very light touch while also staying impressively stable. Those Monobloc calipers give fierce stopping power too, backed up by an excellent ABS system.

By the time we got back to Bologna I was seriously impressed by the 821. Perhaps the only slight drawback is that at £8995 (or £8795 for the matt black Dark) it’s closer in price to the 1200 than to the entry-level Monster 696. But just like the 899 Panigale, it has an appealing blend of performance and price that means it’s arguably the pick of the bunch.