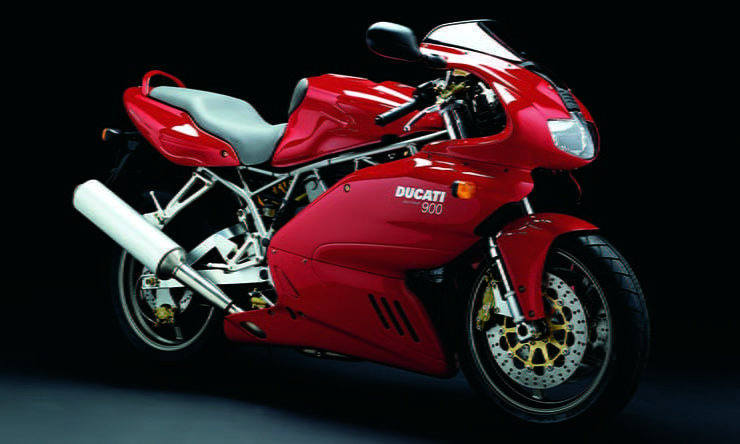 With Ducati’s brand new water-cooled SuperSport models just about to hit the streets, what better time to look at buying the last of the air-cooled Supersport bikes? Move fast though because, while the 900SS is currently a very undervalued machine, history has demonstrated that the launch of a new generation of Ducati generally makes the older generations shoot up in value.

So why is the 1998-onwards 900SS such a bargain? Like so many of Ducati's less popular machines it is a victim of fashion, not a lack of performance. Styled by Pierre Terblanche, the 1998 model saw the traditional slab-sided fairing replaced with a swoopy look that was far more modern. This style didn’t sit well with traditionalists and as that was the SS’s main buyer, not pure superbike fans, it tended to hang around in showrooms. This lack of enthusiasm from buyers has continued to this day and while the likes of the Monster range, the 999, 749 and even the old style Multistrada have regained some popularity, the 900SS remains generally forgotten about. Which is a real shame – unless you are in the market for a cheap do-it-all Ducati that is.

The 900SS is a fabulous bike whose look has certainly mellowed with age. The 904cc air-cooled motor is an absolute gem of a power plant with bags of spirit and great reliability and the SS is armed with a very competent chassis. It certainly sits more on the sporty side of the fence, so don’t mistake it for a relaxed sports tourer, but if you still like a bit of fire in your bike’s belly, yet can’t be dealing with the aching wrists you get from a true Ducati sportsbike, the 900SS will suit you right down to the ground. Get in there quick before the prices start to rise! And if you can find a 1000SS, don’t hesitate for a second!

There are a few of the traditional Ducati things to look out for and a few quirks that specifically apply to the air-cooled motor when buying a 900SS. The first item on the list is service history, the cam belts should be changed every two years and the engine must be shimmed every 6,000 miles. If this isn’t done you can run into some big issues so always buy a bike with a good service history, even if it means paying a few quid more. If the bike has a misfire, look for a build up of green corrosion on the throttle position sensor that sits on the 900’s injector as this is generally the cause. A good clean sorts it out. Always be wary of a squeaking sound when the starter is pushed that indicates the sprag clutch is worn. Other then these checks, the air-cooled motor is pretty solid, however the fuel filter in the petrol tank tends to get blocked on older bikes. If your SS feels lethargic, swap it for a fresh one and also replace the air filter to regain the spring in its step. If you are lucky enough to search out the later 1000cc model, remember Ducati’s immobiliser needs a red ‘master’ key to reprogramme blank black keys, so ensure this is included in the sale.

The Terblanche-look first appeared in 1998 on the 900SS and was basically a styling update on the older 900SS, however the motor was also tweaked and fuel-injection added. It was sold in both half and full faired guise and, in 2002 the SS grew in capacity from 904cc to 992cc. Alongside this capacity boost, the now 1000SS also gained the new twin-spark cylinder head, increasing efficiency and performance. Badging aside, visually the 900SS and 1000SS are identical and like its predecessor, the 1000SS also came in fully or half-faired models. The 1000SS was discontinued in 2006 and was never updated aside from colours. Alongside the 900SS and 1000SS, Ducati also sold a 600SS, 620SS, 750SS and 800SS.

An older 900SS is likely to be in the region of £3000 from a private sale or closer to £3500 in a dealership, which is good value in the Ducati world. Real minters retail at closer to £4000 while the prices of the 1000SS start at £4000, however it is a rarer machine in the used market as it was pretty unpopular back in the day. The slab-sided 900SS is currently going through a major revival and you will be lucky to find a good one for less than £5000, making the Terblanche-era 900SS even more appealing!