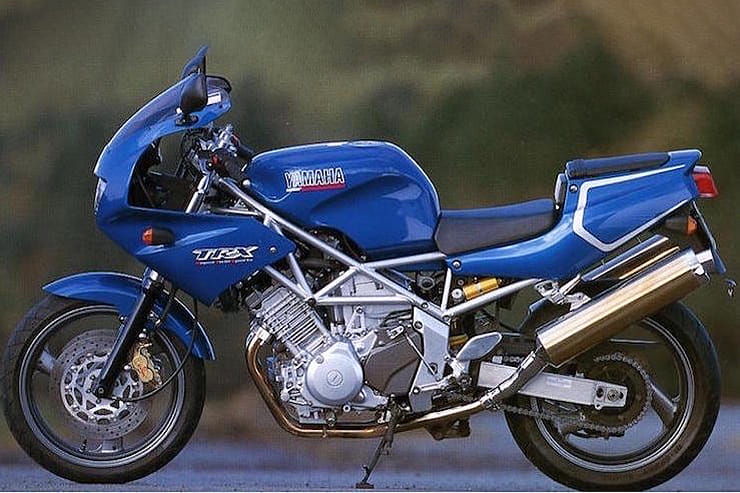 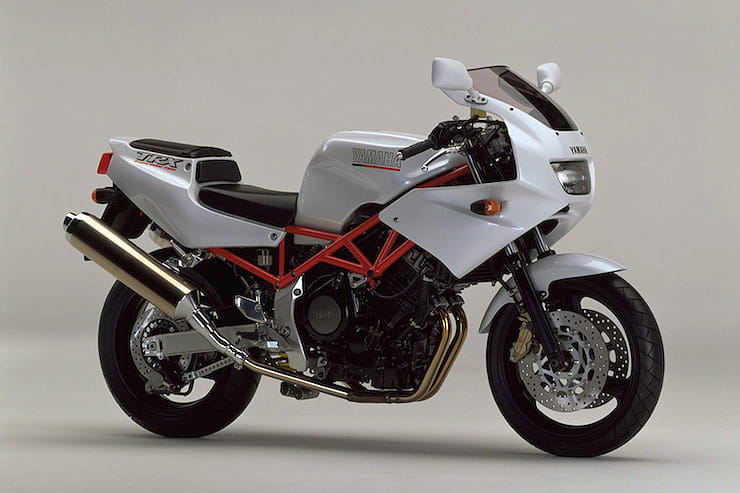 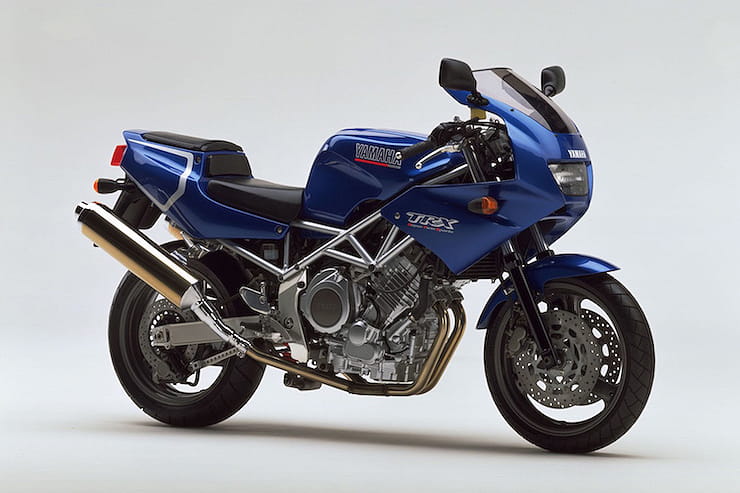 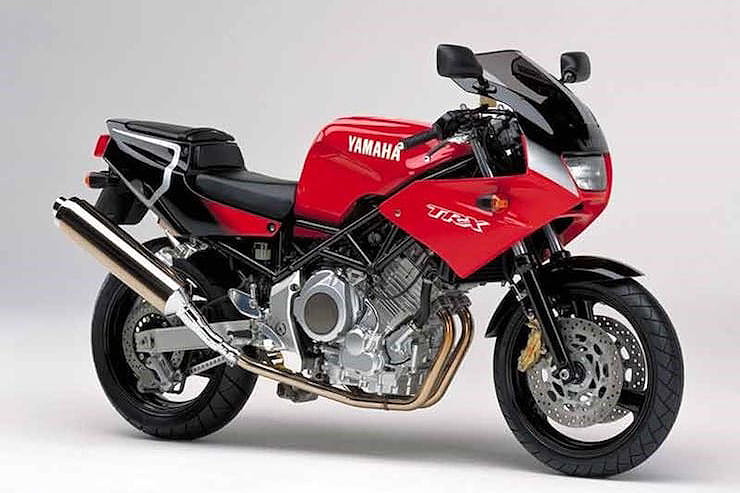 The TRX 850 is Yamaha’s offering during a Japanese trend in the late 1990s to mimic the style and appeal of Italian sports road twins and particularly Ducati’s 900SS. Honda came up with the V-twin Firestorm, Suzuki its V-twin TL1000S while Yamaha, without any V-twin engines to hand, reworked the TDM850’s parallel twin to mimic a V-twin, put it in a Ducati-alike tubular steel trellis frame with a sporty half fairing and painted the whole thing red and white. Initially intended only for the Japanese home market (in 1995), after some European journalists were offered a ride Yamaha decided to bring a slightly tweaked version quietly into Europe in 1996. When it arrived, however, despite a stirring powertrain it was more expensive than hoped and lacked the performance and authenticity of its Honda and Suzuki rivals so wasn’t a success, with unsold examples being discounted heavily and production ending in 2000. Subsequently, however, it first became regarded as a bargain, underrated road sportster and more recently as an appreciating, forgotten gem. While the engine is solid, finishes, brakes and suspension all need looking after/upgrading but find a good one – and even the very best examples still go for at most £4K – and you get a great, characterful, pure road sportster that’s hugely satisfying.

When originally launched into Europe in 1996 the price of the Yamaha TRX 850 was expected to be as low as under £6K, or just under that of the then FZR600R. It wasn’t to be. Launched at £6999, although still less than the contemporary Ducati 900SS, it was considered slightly pricey, especially considering the TRX’s fairly basic, ‘parts bin’ spec, a factor which hit sales significantly and ultimately resulted in heavy dealer discounting, sometimes as low as £4K to unload unsold stock, while from 1999 the RRP finally fell to just £5699 where it stayed the last bikes were sold. As a result, in the early Noughties, TRXs could be snapped up for as little as £2500-3000 and was considered something of a bargain. Over the years since it’s slowly become regarded as an underrated, modern classic yet still great value. Decent examples, although rare, are still being advertised at under £2,000 while even the very best, with uprated suspension, brakes and more, rarely go for over £4000. A 900SS experience with Japanese reliability and for bargain money? That’s the TRX 850. 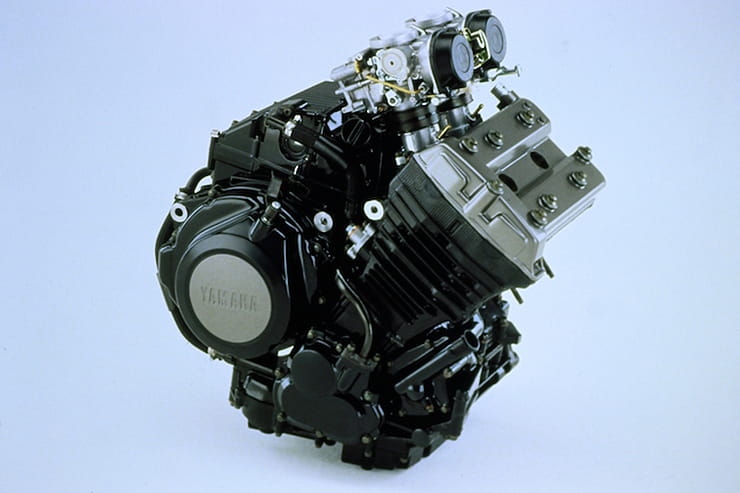 Yamaha set out to replicate the performance and character of Ducati’s V-twin 900SS with the TRX and it achieved just that – but with Japanese reliability and extended service intervals. Peak power is a pleasing 79bhp (the then 900SS produced 80bhp) but with even more meaty torque than the Ducati giving impressive mid-range drive. Yamaha’s clever bit was reworking the engine with a 270-degree firing order, which gave the TRX the mannerisms of an air-cooled V-twin – shudder from the engine at low rpm, plenty of bottom-to-mid drive – but was in fact a parallel twin. Not only did it replicate a V-twin engine, it performed like one. A fist full of throttle exiting back road bends would always instil a smile on the rider’s face.

The TRX’s parallel twin powertrain and transmission was developed from that of the 849cc, 360-degree crank TDM850. To replicate the character of a Ducati-style 90-degree V-twin, Yamaha changed the TRX’s firing order with a 270-degree crank and in addition gave it higher compression, a larger airbox, lightened flywheel and a closer ratio five-speed gearbox. Together with two larger 38mm Mikuni carbs these combined to give the TRX 11bhp more than the TDM. The new motor is the heart of the TRX’s appeal, was successful enough to be adopted by the TDM itself and has proved durable and reliable with no major problems. Its twin silencers, however, were, like with many Yamahas of the era, prone to rot and were heavy, so most surviving examples now wear replacement, lighter and fruitier sounding aftermarket versions. 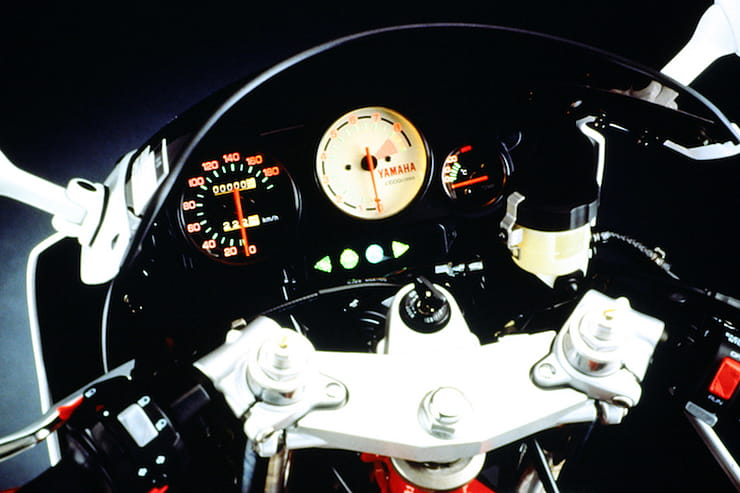 In standard trim the TRX can sup fuel fairly meagrely at 50-60mpg, thanks to it being a fairly soft twin cylinder. But put your foot down and consumption via the twin Mikuni carbs can drop to as low as 26-28mpg.

The TRX 850’s chassis wasn’t quite as sorted as its engine. Although respectably light, slim, with an attractive and effective tubular steel trellis frame with sorted geometry, the suspension is best described as adequate on smooth roads and woefully soft on anything else. Wallowing and not much in the way of feel from the tyres is bad enough but diving and springing back on and off the brakes is worse. Most people turned the rear shock’s settings to near maximum and made do but today many uprate the FZR-derived forks with Hyperpro or similar springs and a revalve of the damping system while Nitron shocks are a popular aftermarket fitment at the rear. Do that, and as many happy owners will testify, it’ll turn the TRX into a sweet handling performer. Incidentally, original ‘Japan only’ TRX’s are distinguished by their red/white liveries and Brembo brakes; the first European bikes had silver frames with Nissin calipers while the last (1998-0n) Euro bikes had black frames, tweaked livery and, once again, Brembo brakes. 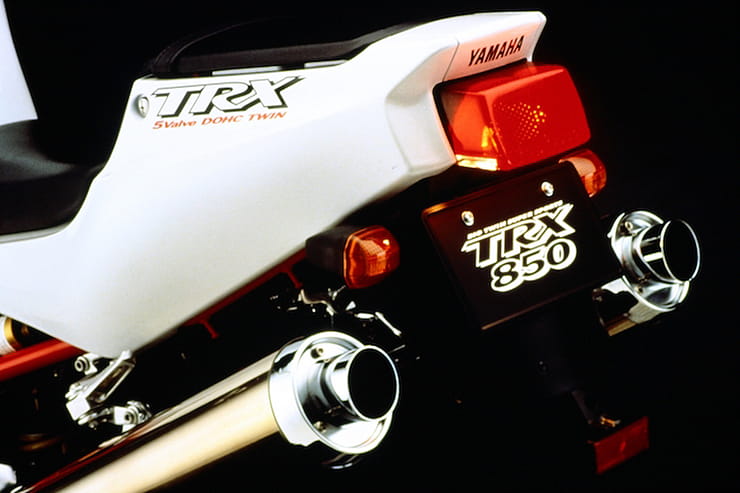 The brakes of the TRX 850 are a major talking point for owners. The original 1995 Japan bikes (which were white with red frames or red with white frames, again mimicking the Ducati 900SS), of which some made it to the UK as grey imports, which were popular at the time, came with proper, Italian style Brembo brake calipers. The first official UK bikes the following year (with silver frames), however, did not and were widely criticised. As a result, DIY upgrades are commonplace, often using the ‘blue spot’ calipers from Yamaha’s own R1.

Although undoubtedly a sportster, the TRX, like the 900SS upon which it’s modelled was also very much intended for the road. As a result its ergonomics are fairly relaxed and comfortable, even for six-footers and the half fairing does a passable job of deflecting the worst of the wind. That said, the TRX, though reasonably proportioned, is also still fairly minimal, light, slim and basic, so, although an enjoyable road sportster is not really a bike on which to contemplate huge miles with luggage and pillion.

Hailing back to 1995, the TRX predates the modern era of electronics, fuel injection, on board computers and sophisticated rider aids – and that’s all part of the appeal. With the TRX you get two wheels, a simple, but engaging and effective twin cylinder engine, an exposed, skeletal tubular steel trellis frame and the minimum of bodywork – just like a Ducati 900SS in fact. There were few factory accessories available at the time and, because it was so short lived and so few sold, there’s a fairly restricted aftermarket for accessories, too. There is an owners forum – www.trx850.com – although activity is fairly minimal. 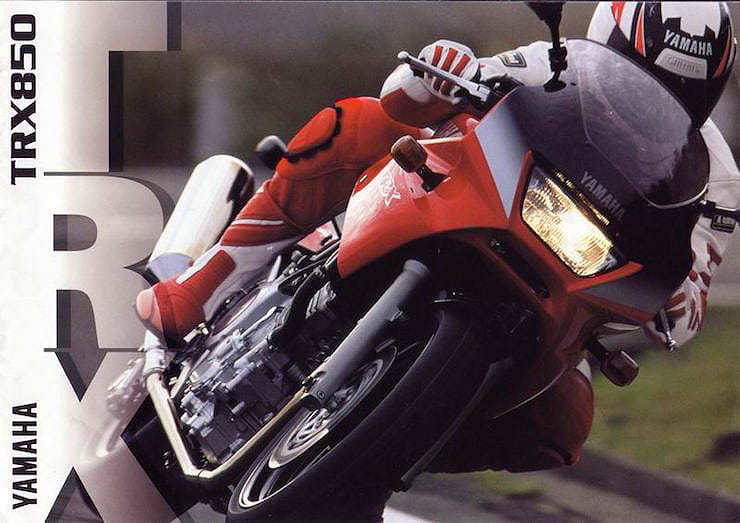 The TRX 850 is one of those slightly oddball, ‘left field’ bikes that proved unsuccessful originally but now just gets better with age. Its riding dynamics and proposition – real-world brisk, engaging and simple – are as appealing as ever, its styling is timeless and has aged far better than its Japanese rivals, it’s durable and easy to work on and, best of all, it’s still mouth-wateringly affordable. Yamaha undoubtedly got some things wrong when the TRX was launched: it was too expensive; its brakes and suspension were marginal and quality wasn’t great. Today, though, it survives as a brilliantly pure road sportster at bargain money.