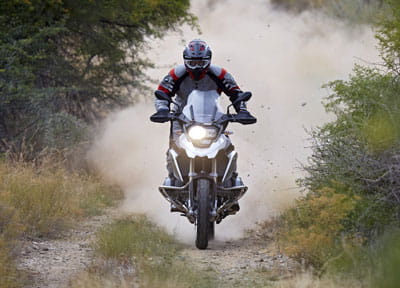 BMW’s R1200GS is often labelled the ultimate adventure bike and with good reason. The air-cooled Boxer engine carries a perfect blend of character, reliability, performance and economy. It’s has almost shed-built looks (especially the exposed frame section when panniers are left under the stairs) are sort of endearing but good because why cover up or add plastics and metal when there’s no need to.

The R1200GS Adventure is based on the R1200GS and followed it into the shops in 2005 but with a rake of modifications to make it a polished performer of go anywhere riding. At the heart of the beast is the same four-valve per head 1170cc Boxer engine. No complaints here then.

What the Adventure model has over the standard model is an ability to be ridden a lot further and with total off-road superiority over the stock GS. With the standard fitment of a 33-litre petrol tank, which is useful if travelling into unchartered the territory, BMW at one point claimed a possible 461 miles in one go if riding at a conservative 56mph. Ok, so the extra fuel load adds to the overall weight but it’s not really noticeable along the M6.

To cope with off-road riding the Adventure is equipped with 20mm longer front and rear suspension travel to save pounding wrists but mainly the engine. The downside is that the Adventure is taller and a bit daunting to look at let alone attempt to swing a leg over. Seat height is adjustable but 895mm in the lowest setting it’s still way up there. Despite the payload and stilt-like height, the Adventure doesn’t sway from its riding duty. Stable and sure from A to B backed up with braking to stop easily and swiftly.

Wire-spoked wheels, wider placed footpegs (off-road metal-type with removable rubber tops) and off-road handlebars all lend to its ability to cover trails and worse. This ability was famously covered by Ewan Macgregor and Charley Boorman via their filmed “Long Way” tours on the R1200GS and previous R1150GS Adventure.

What the Adventure does have is road presence. Admiring glances come thick and fast from all ages because the Adventure oozes class and purpose and invokes visions of… adventure. The guaranteed riders get a similar buzz regardless of whether they’re bombing up the A1 or tackling mud trails of a far flung continent. Now add myriad of accessories such as fog lights, crashbars, metal panniers and more and the GS Adventure will up its presence threefold.

+ points – Comfort. Can ride all day on one tank load. Goes anywhere.