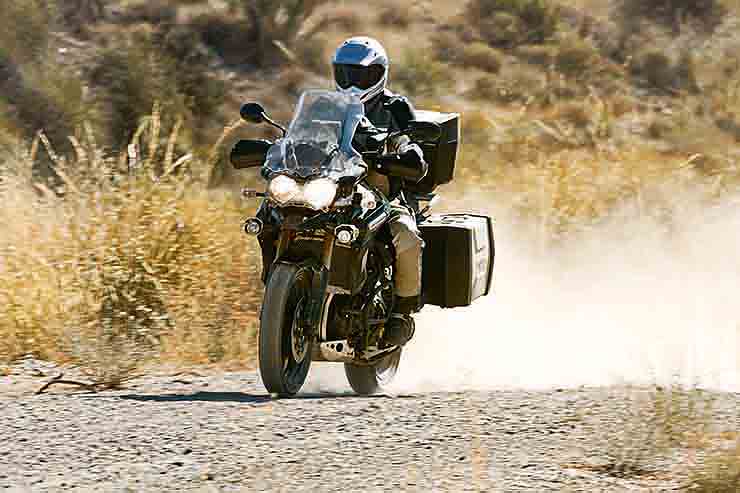 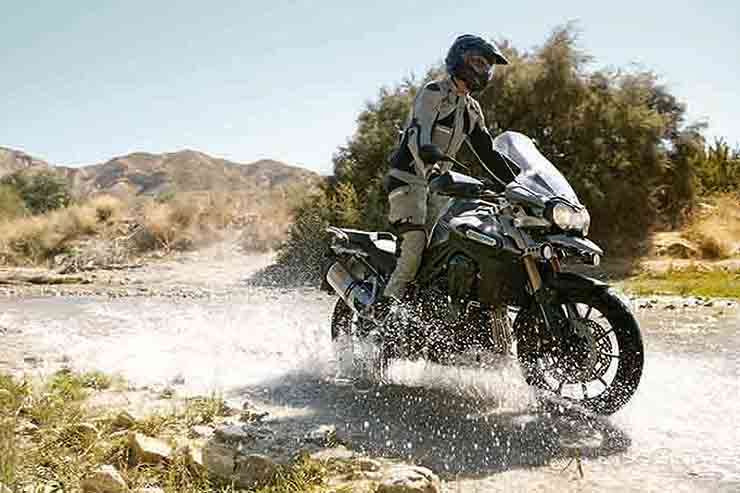 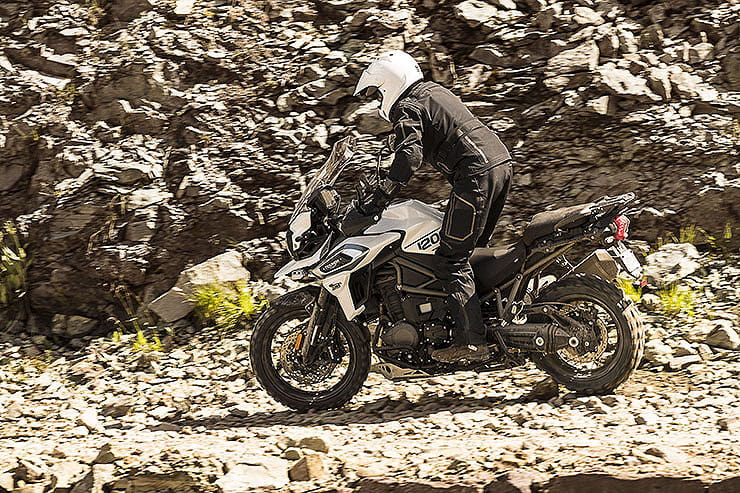 With Triumph now closing the door on the original three generations of Tiger Explorer 1200 (or just Tiger 1200 if you are talking about the final one) with the launch of the all-new 2022 Tiger 1200, many riders may be looking at snapping up a used bargain. Is this a wise move? If you are after an adventure bike to churn out road miles on and generally stay away from anything more serious than a gravel path, the Tiger Explorer makes a lot of sense. Well-equipped and extremely comfortable with a cracking triple motor, the Explorer isn’t a bad used buy at all. However, there are a few pitfalls you need to be very wary about when it comes to Triumph’s big-capacity adventure bike. Read on to avoid being caught out...

The Tiger Explorer1200’s price tag has increased over the years as its spec has also upped. The very first Tiger was £11,199 in 2012, the updated model then pushed this to over £15,000 in top-spec XRT or XCA guise in 2016 while the final generation, the 2018-onwards models, were touching £17,000 for the range-toppers. Even more for the occasional ‘limited edition’ version (which was basically just a paint job and accessories/luggage added on). Nowadays you are looking at paying around £6000 for a first generation bike and between £8000 and £10,000 for the second generation depending on the model and its spec. Prices for the 2018 bike start at £9000 and rise to £14,000 for an ex-demo or very low milage one in a high spec.

The 1215cc triple motor was brand new for the Tiger and it is a real beauty, delivering lots of lovely torque in a very smooth fashion thanks to its balancer shaft. Arriving with ride-by-wire as standard the motor was only really very slightly refined over the years with a bit of weight loss here and there and updates to its electronics. The revisions do make a difference to the feel of the bike as the last generation is noticeably more eager to respond but in terms of performance, the first generation boasted 135bhp with 89.3ft.lb of torque while the final one claimed 139bhp with 90ft.lb so it’s much of a muchness. As a road bike engine it is really lovely to use and great for solo or two-up touring thanks to its abundance of torque.

Ok, here we need to start off with a warning. The very first Tiger Explorer 1200 models suffered from cylinder head issues and there was actually an official recall. This earned them the fairly unjustified nickname ‘Exploder’ to a few uncharitable sorts, a reputation that isn’t deserved. With long 10,000-mile service intervals the triple is a solid engine that (recalled models aside) won’t let you down. You need to stay on top of things such as the 20,000-mile valve clearance check but if you service it regularly, all should be well. Tigers with over 50,000 miles on their clocks are common, which is where the second warning comes in. The final drive bevel box (in the rear hub) is a known weak point and if it is grumbling or leaking oil it is on its way out. Generally they seem to last about 50,000 miles (tellingly it has been completely redesigned for the new Tiger 1200 models...) so always treat this area with caution and inspect it well as it is very costly to get rebuilt. The exhaust system is stainless steel, so rust shouldn’t be an issue, and the finish on the engine is generally pretty good. Take it for a test ride and if the temperature stays nice and low (four bars on the display, if it is six get worried, a hot motor isn’t a happy one) and the rear hub is sound all should be well. As on any high-milage bike, check the radiator for corrosion caused by a build-up of muck that could lead to holes and also damage from stone chips. 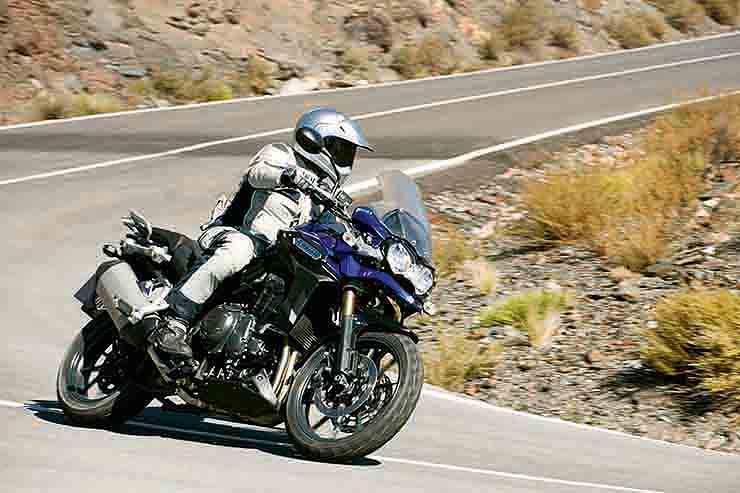 Triumph claimed the Explorer models would average about 55mpg but owners report 47mpg is more accurate, which is still pretty respectable. This will drop with panniers etc detracting from its aerodynamics but you can reasonably expect to see about 200 miles from its 20-litre tank with a fuel warning light at the 170-mile mark.

Triumph never liked to quote wet weights for the Tiger – and for good reason. It is a heavy old beast and a very substantial bike (the new model is a massive 25kg lighter) so you need to treat it with caution at low speed. The official line is that it weighs 248kg dry, so you are looking at 270kg at least when fully-fuelled. If you are short in the leg there is a ‘low’ option that is worth considering or at the very least go for the accessory low seat to allow you to get both feet firmly on the floor. This bulk means that low speed spills are common, so always check the crash bars or bar ends for signs of damage and that the bars themselves are straight. Generally, the panniers take the brunt of any tip-offs, so see if they are dented or their bracketry twisted. The original Explorer models ran conventional KYB suspension but for the 2016 update semi-active WP units arrived on the top-spec models with the base bike retaining conventional units. This pattern was repeated in 2018. As with any electronically-adjustable suspension, always check all is well as rebuilding the shock technically isn’t possible (aftermarket companies can do it) and that means a big bill from Triumph for a new unit. On the go the Tiger’s weight, while reducing its agility, makes it feel very secure and planted to the road’s surface and the semi-active suspension is a welcome addition. As a road tourer the Tiger is incredibly plush and although you still know it is a big bike, once rolling it doesn’t feel too intimidating. The XC models may be billed as more ‘rugged’ but they are basically just cosmetic off-roaders and get spoke wheels and a bit of extra crash protection, the physical suspension units are the same as the XR’s. In 2016 the wheel widths enlarged from 110/80 to 120/70 at the front and 150/70 to 170/60 at the rear, improving the road holding. There were also slight chassis geometry alterations.

One part of the Explorer that has seen some serious updates are the brakes. The original model featured conventionally-mounted four-piston Nissin calipers with (switchable) ABS. This was upgraded in 2016 to Brembo radial brakes with angle-sensitivity in their ABS thanks to the new IMU, a set-up that was retained in the final generation. On the go the Brembo units deliver more power and it is nice to have the extra safety net of angle-sensitivity but on a bike such as the Tiger you aren’t really going to be that hard on the stoppers. As on most Triumphs, braided lines are standard fitment. 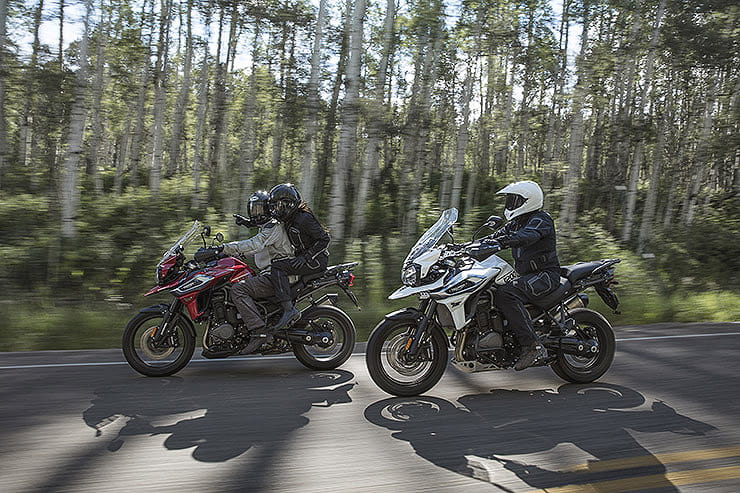 This is one area the Explorer really excels. An extremely comfortable bike, it is a joy to cover miles on thanks to a well-padded seat and large screen. In the 2016 update all Tiger models gained an electronically adjustable screen (check it works!!!) as well as slight bodywork modifications but you needed to buy the higher-spec versions to get things such as heated grips as standard. A really great bike for touring on, with a set of luggage (buy one with it already fitted to save cash) the Explorer is ready for some serious mile munching – on tarmac, not gravel...

This is where it gets a bit complicated. The first generation of Tiger came with two-stage traction control, ABS (non-angle-responsive), cruise control and the option of things like heated grips. The second generation added an IMU and that means angle-responsive electronics arrived alongside an electronically-adjustable screen and hill hold control. The higher-spec models also added semi-active WP suspension. The final generation went all-in with a TFT dash, up/down shifter, keyless ignition, extra riding modes cornering lights. Always check exactly the spec of the bike you are looking at because some of the accessories were added to models that didn’t have them as standard. Basically, if you go for the XRT or XCA version you get everything where the XRx and XCx are slightly lower-spec.

Although the Tiger Explorer 1200 didn’t put a dent in the GS’s sales, Triumph did prove they could make a decent road-biased adventure bike. The issue the Explorer always faced was the fact it was continually playing catch-up to the ever-evolving GS and that harmed its sales as it was never seen as that ‘cutting-edge.’ If you are happy with a bit of a heavy bike, and like that associated solid feeling of security in bends, the Tiger is a decent option. It’s no GS-beater but it is a good road-going adventure bike.

Three things we love about the Explorer… 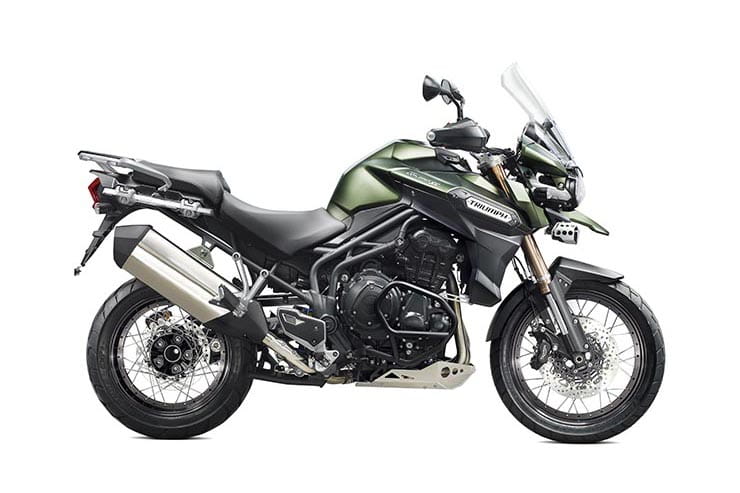 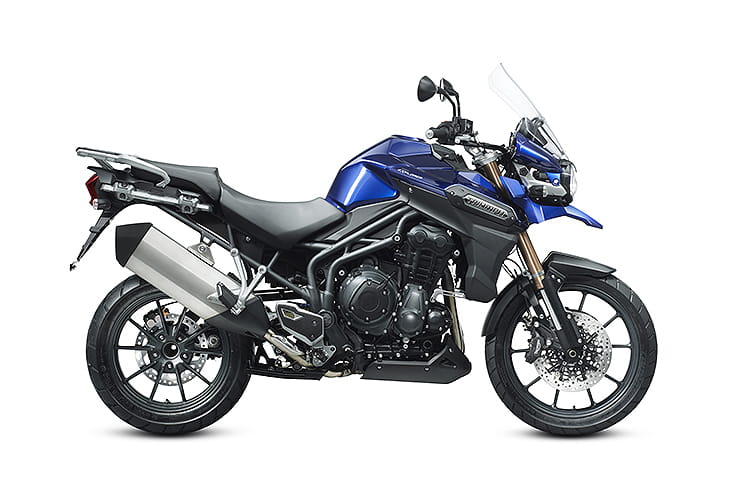 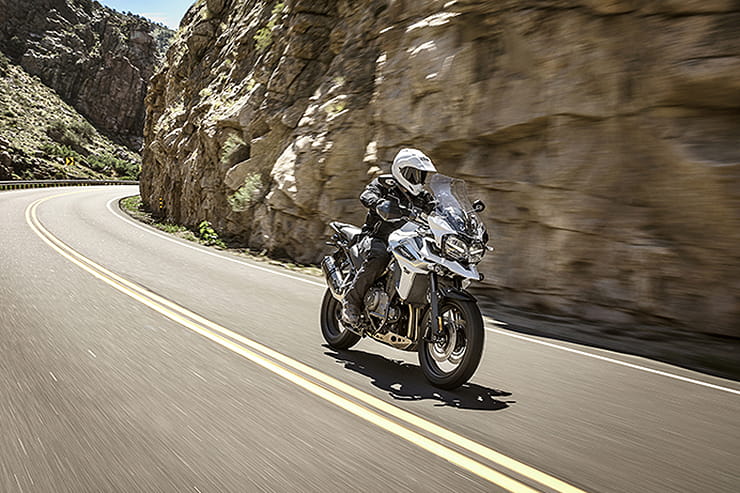