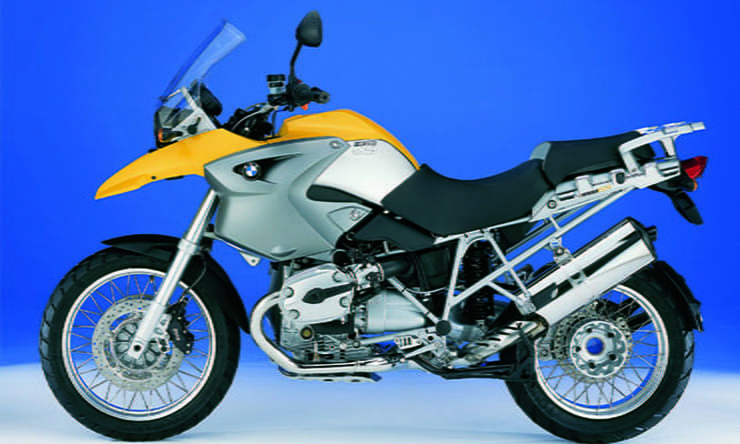 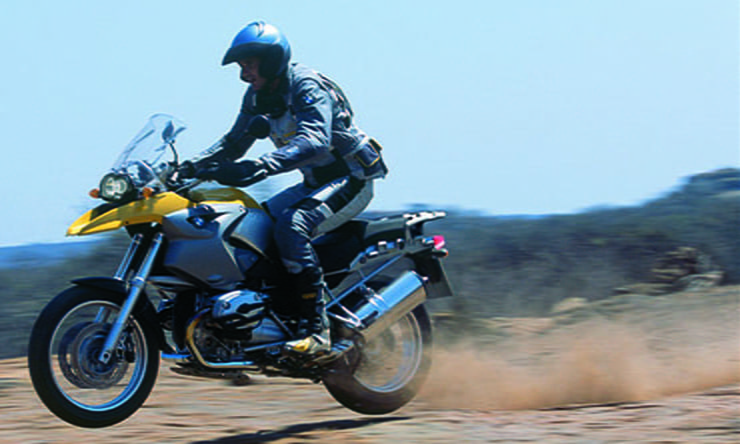 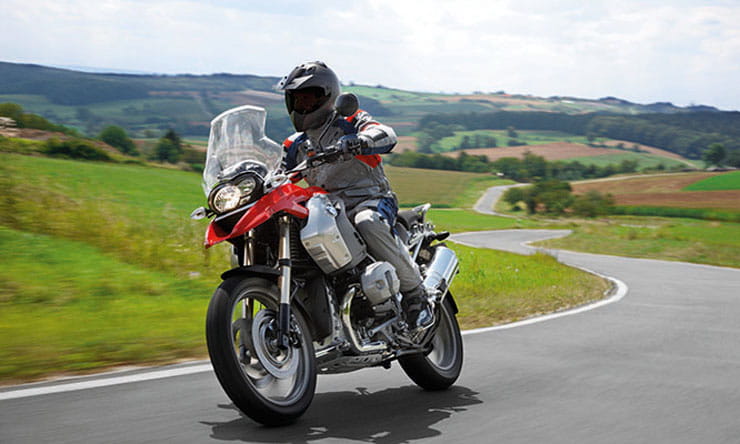 BMW brought their mighty GS into the modern age with a new larger capacity motor, huge 30kg weight saving, improved handling, updated electronics and far more on-road bias. This was the point that the GS, and subsequently as others followed its lead adventure bikes as a whole, effectively took over from sports tourers as the riding public’s favoured agile mile-munchers. 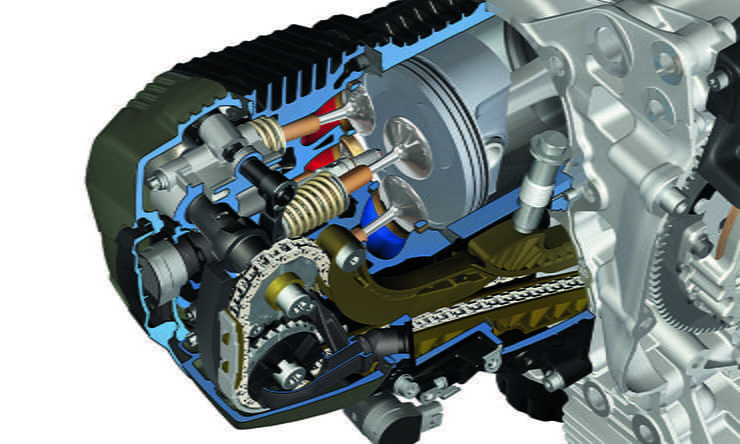 As well as pushing up from its previous 1130cc capacity to 1170cc, BMW included a new balancer shaft in the 1200 boxer motor, adding an extra element of refinement. Within the motor the crank was lightened by 1kg and this, alongside lighter pistons, larger valves and a redesigned valve drive, helped it rev faster and produce more power and torque, increasing to a claimed 98bhp with 85ftlb of torque. As part of the weight saving regime the GS’s six-speed gearbox was redesigned, shedding 13kg in the process, while a new exhaust system also saved 3kg when compared to the outgoing model’s system.

A whole new tubular steel frame was optimised for weight saving and improved handling, giving the GS its sportiest ride to date. A fully load-bearing frame, the engine/gearbox is mounted to the rear frame at five points and the front frame at a further four points. The GS was offered with the choice of spoke wheels or the new design of cast aluminium units, which ran wider 110/80-19 and 150/70-17 tyre sizes than before and were again optimised for maximum weight saving. The rear is actually 1.6kg lighter than the old model’s rear wheel. 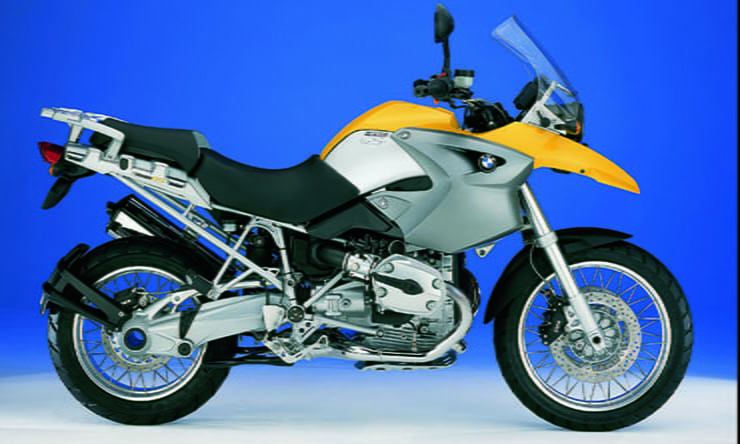 While sticking with their traditional Paralever and Telelever suspension systems, BMW went through and refined both systems and shed 10% of the cast-aluminium Paralever’s weight while also updating its shaft drive and increasing its overall stiffness. A new 50mm axel hole was also added to improve heat dissipation from the final drive. The Telelver’s longitudinal arm is all-new and made from forged aluminium with the front wheel’s camber was reduced by 5mm to 110mm with the head angle retaining the previous model’s angle of 27.1-degrees. The front shock has 9-stage spring preload adjustment while the rear shock has an infinitely variable remote spring preload adjuster.

The GS came as standard with BMW’s EVO brake system, but in 2004 Integral ABS was an optional extra. This system could be deactivated for off-road use and linked the brake systems when activated. Steel brake lines were standard fitment on the twin four-piston front calipers with their 305mm discs and two-piston rear caliper with its 265mm disc. 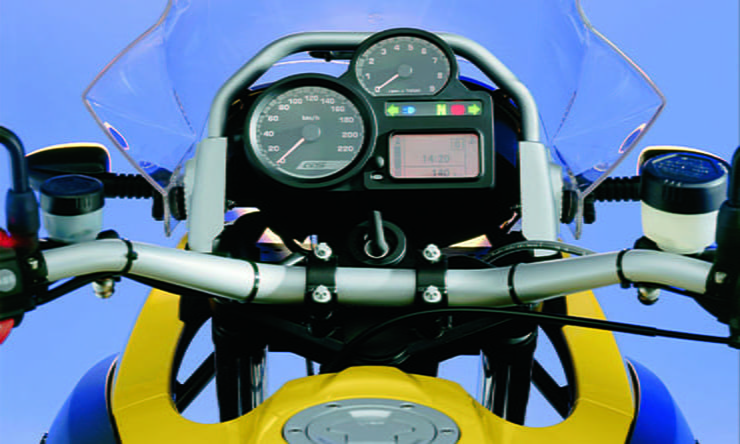 The R1200GS was the first boxer model to gain CAN-bus technology, which linked all the bike’s systems and reduced the number of wires. The GS also featured BMS-K (BMW Engine Management System). An updated engine management system with a faster processing speed than before, it contained extra sensors to improve the bike’s fuel economy by 8%, ability to deal with low-octane fuels and throttle feeling. An ignition immobilisor was fitted as standard and the dash upgraded.

The GS has always led the way in terms of rider comfort and the R1200GS features a rider seat that can be adjusted between either 840mm or 860mm as standard. A 30mm higher seat or a 30mm lower seat was an optional extra. The bars feature tapered ends and are made from steel and not aluminium to improve durability and reduce the chances of them bending if the bike is dropped. Clutch and brake levers are span adjustable, the screen is adjustable in its height and heated grips and brush guards were optional extras.

Pillions get integrated grab rails within the luggage rack while the pillion seat itself can be removed and beneath is a flat loading surface for extra luggage carrying capacity. BMW’s Telelever front suspension reduces dive under braking and when changing gear, meaning pillions get a smoother ride with less headbanging. 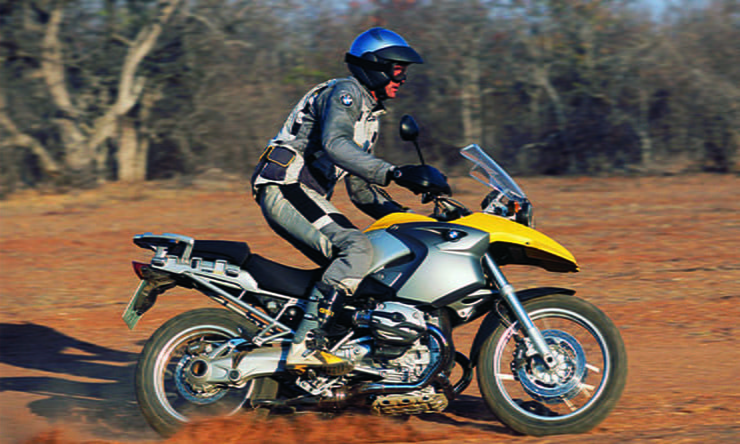 The BMW is not the fastest or most agile of today’s adventure-themed bikes, but its air/oil-cooled flat-twin is full of character that can pull heavy loads from walking speed with ease and keep up with Autobahn traffic on their way home from work. With the right person at the bars it can also put up a good display on a Sunday run with the bike club. Not bad going for a shaft-driven ‘touring machine’ with aerodynamics of a breezeblock!

The ride quality of the suspension is perfectly acceptable, but on our test GS it had the £650 option of Automatic Suspension Adjustment (ESA) to enable suspension properties to be adjusted via a simple bar-mounted switch – simplicity in its purest form. But that’s the beauty of the GS: it is simple in styling and in working conditions but oh so effective at getting from point A to B.

With GS aftermarket accessories swamping most accessory catalogues, the GS can be made very personal and tailored to suit your riding requirements. Want to put adventure in your life? The R 1200 GS is, quite rightly, the grand master that will show you the way. 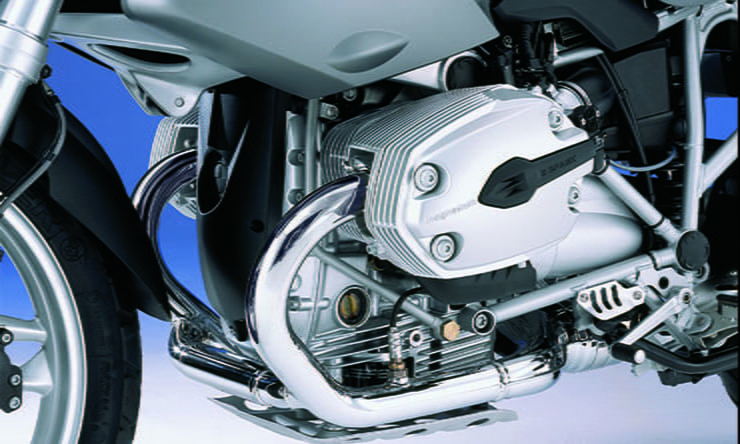 The 2004 update moved the GS from a quirky, large capacity off-road bike that was a bit cumbersome to a simply brilliant sports tourer. And it remains a fantastic machine for covering miles in comfort, whether they be for commuting, touring or just having fun. However this is a bike that you can now buy for under £4000, making it a total bargain in the used bike world.

This generation of GS really does handle surprisingly well and has an excellent level of build quality and very good reliability. Add to this an extremely comfortable riding position, mpg figures that are often in the high 40s and even low 50s and the motor’s ability to shrug off all that you can load it up with (including a pillion) and there is little more you can wish for.

The older air-cooled GS may lack some of the latest technology such as power modes or semi-active suspension, but the important things such as ABS and traction control were fitted to this generation and to be honest, they are all you really need. If you want to keep a newer bike for summer jaunts rather than subject it to the harsh realities of a daily commute, get an R1200GS – you won’t regret it.

Most BMWs come with a full service history, so be cautious if there are any large gaps. Mileage doesn’t bother the GS, so it is better to have a bike with a few more miles on its clocks and a full service history than a lower mileage one that is lacking. There is a cover on the front of the boxer engine that has some sound-deadening foam insulation behind it, which drives owners wild. The foam absorbs water, allowing corrosion to set in and the paint to flake off. Loads of owners simply remove the foam. The clutch’s slave cylinder is a notorious weak point and often leaks, so check for any weeps or signs of damage to the paint around this area, and also inspect the front and back of the shaft drive system for oil leaks. With the bike on its centre stand, give the rear hub a good wobble to inspect the shaft drive’s bearings for play as this is a costly fix. As the GS is a tall bike, low speed damage is common, so check the any engine protection bars for scrapes and also that the bars are straight. BMW sold a huge array of extras for the GS, so if you want a bike for commuting and require panniers or a top box, buy one with them already fitted as it is far cheaper than trying to source the items afterwards. If you buy a later model with the ESA system, always check the shock for leaks as it isn’t rebuildable and a new unit costs upwards of £600. You can remove it and use an aftermarket shock, but there will be an ESA warning light illuminated on the dash.

The most significant update to the air-cooled R1200GS happened in 2010 when the boxer motor gained a new twin-cam head. While on paper the 5% increase in peak power and torque (now 108bhp and 88ftlb) is fairly minimal, the bike rides significantly better and also has the option of ESA (Electronic Suspension Adjustment) and ASC (Automatic Stability Control) traction control. If you are into big adventures, you may also be tempted by the 2006 R1200GS Adventure, which added a huge 33-litre tank and long travel suspension to the party. It was also updated in 2010 with the twin-cam head

Prices for an early R1200GS with a mileage of over 30,000 start at £3500 in a private sale, which is very good value for money. If you buy from a dealer expect to pay in the region of £4000, but that generally includes panniers. Lower mileage bikes cost about £4500 and generally have a few more extras such as an aftermarket end can or heated grips etc. If you want the updated twin-cam motor, you will need to pay between £6000 and £7000 with last-generation air-cooled bikes going for £7500 -£8500. The Adventure model adds about £500 to the price tag.