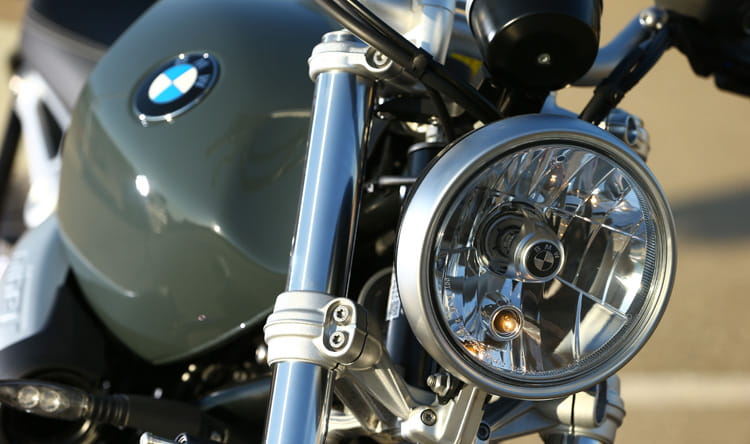 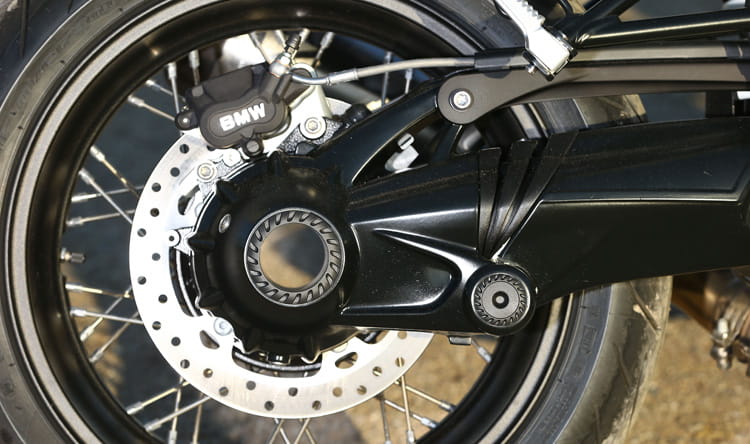 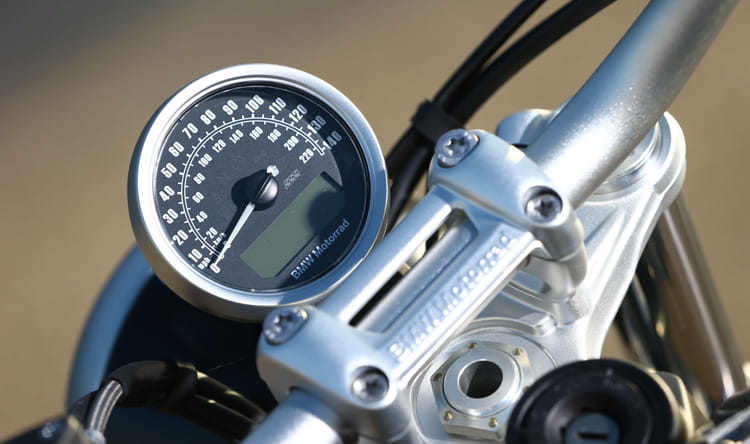 “Pure” is a slightly curious name for a motorbike, but it suits the new, back-to-basics version of BMW’s R nineT well enough. This naked boxer is no more clean or wholesome than any other bike. But as a no-frills roadster with an aircooled engine and minimal electronics, it’s about as pure and simple as large-capacity motorbikes get these days.

The Pure follows in the tyre-tracks of the original R nineT that was a big hit on its launch three years ago. That success inspired BMW to create a nineT family – firstly with last year’s Scrambler, now with the Pure and sporty Racer, soon with the Urban GS that is due in the summer.

The base-model Pure is particularly welcome due to the nineT family’s much-advertised suitability for customisation. With the original model’s price now starting at £12,200, removing perfectly good parts to fit accessories quickly gets expensive. Modifying a cheaper, less lavishly equipped base-bike such as the £9990 Pure could make much more sense.

Like the Scrambler, the Pure inherits the original nineT’s 1170cc, dohc boxer engine; essentially the same air/oilcooled unit that was previously fitted to the R1200GS and RT. Its maximum power output of 110bhp and healthily flat torque curve are unaffected by a new exhaust system that incorporates a noise-tuning valve, and helps the BMW get through Euro 4.

The Pure follows the Scrambler in using a three-part tubular steel frame, incorporating front and rear main sections plus a bolt-on rear subframe that allows quick removal of the pillion seat. But it has much steeper roadster steering geometry, albeit not quite as sharp as the standard nineT’s. 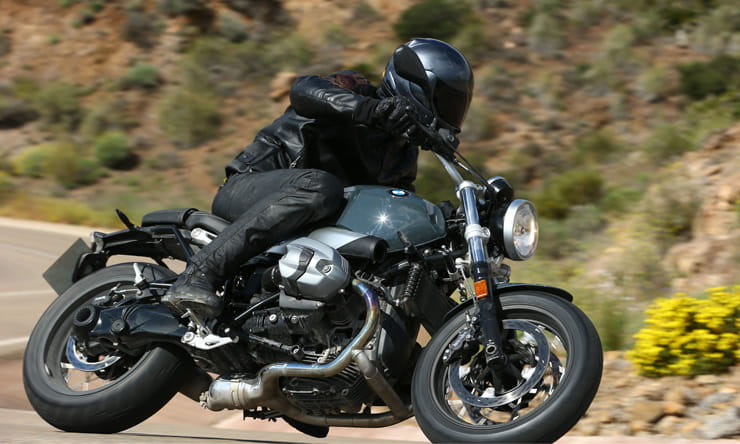 Suspension is a more basic version of the original models: basic 43mm right-way-up forks up front, instead of thicker, multi-adjustable upside-down units; and a simpler rear shock that can be adjusted for preload and rebound damping, but lacks the nineT’s remote adjuster.

Similarly the wheels are cast 17-inchers, instead of wire-spoked alloy rims; and the 320mm front brake discs are gripped by conventional four-pot Brembo calipers rather than radial Monoblocs. The biggest cost saving probably comes from the petrol tank, which is of unchanged 17-litre capacity but made from steel instead of aluminium.

The Pure comes with a dual seat (unlike the Scrambler and Racer), which is slim and, at 805mm, sufficiently low to allow most riders to get both feel on the ground. But the pared-down character of this base-model bike is clear from the moment you climb aboard. 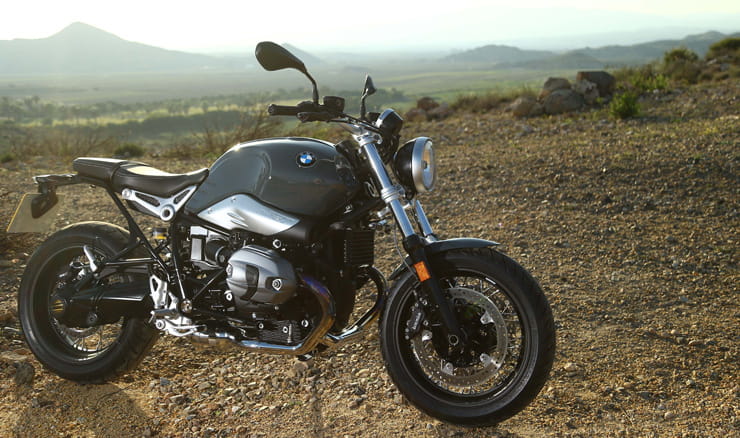 Ahead is just a single round speedo (whose digital insert shows time and trip info) and a flat, fairly wide one-piece handlebar clamped to a neat, forged alloy top yoke. The simple switchgear has no button for riding mode, let alone electronic suspension settings, but on a cold day in southern Spain I was relieved that the launch bikes did have one for heated grips, a £240 option.

Straight-line performance is identical to the original R nineT’s, and the Pure was quick to remind me just why that bike is so much fun. It might be 15bhp down on the latest liquid-cooled boxers, but the Pure has plenty of grunt and at 219kg fully fuelled it’s respectably light. The Euro 4 tweaks haven’t compromised the engine’s blend of flexible power delivery, sweet throttle response and respectably strong power at higher revs.

Its upright, wind-blown riding position meant the Pure felt entertainingly quick, especially when it was accelerating hard in the lower gears. And the old-school motor stayed pretty smooth when the BMW was stretching its legs and my arms on a brief burst to three-figure speeds, emitting that distinctive flat exhaust bark all the while.

It also had rather strong engine braking, which I didn’t recall from the original model and which wasn’t a problem. Nor was the lack of the high-tech electronics of most new open-class bikes, though the launch machines were all fitted with BMW’s more basic ASC traction control system, a £310 option.

Most of the time we were on twistier roads, where the Pure’s simple but well-controlled chassis did a very decent job. Suspension felt slightly softer than the original nineT’s, and with limited potential for fine-tuning that’s how it stayed.

Steering was light and neutral, with minimal wiggling of the bars even when the roads briefly dried enough for some enthusiastic cornering. Hard braking required a firm squeeze of the handlebar lever, because the four-pot Brembos didn’t have the bite of radial Monoblocs. But  their performance was more than adequate, as was the bike’s ground clearance and the grip of Metzeler’s Roadtec Z8 tyres.

The Pure even made a good impression on my final ride of the day, the blast back to the hotel, during which the heavens opened and several Andalucian roads quickly turned into shallow but fast-flowing streams. The BMW’s total lack of weather protection ensured I got soaked but it was hard to dislike a lively, fun-to-ride bike that is bursting with old school flat-twin character.

Although the Pure matches the original R nineT’s performance in most respects it inevitably can’t offer the feel of quality generated by that bike’s shimmering alloy tank and plethora of neat details, from black-rimmed wire wheels to the old-style model plate riveted to the steering head.

There again, all those features and many more are available as factory-build options or accessories, with that gorgeous polished tank costing either just over or just under a grand, depending on whether it has a visible seam. The extras list runs to two full pages, from rev-counter and a choice of cylinder head covers to bench seats and brushed aluminium humps.

Perhaps the only drawback of all that is that it would be easy to get carried away, negating the Pure’s initial price advantage. But whether it’s kept clean and simple or adulterated with accessories, the R nineT Pure has plenty to offer as the basic, rider- and wallet-friendly member of BMW’s retro boxer family.