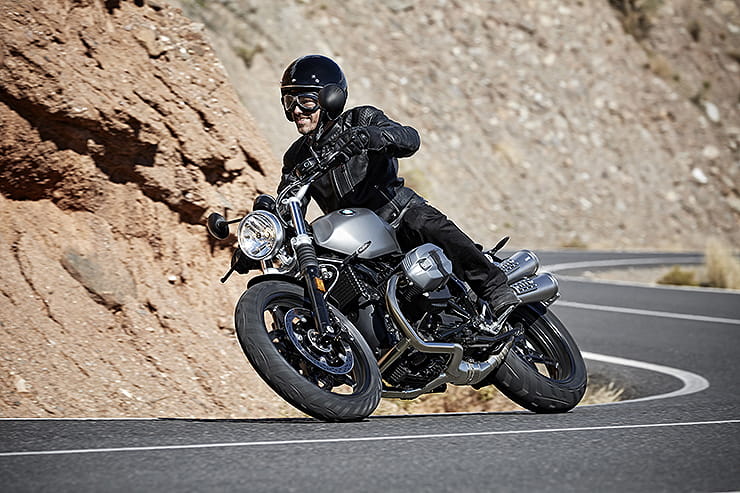 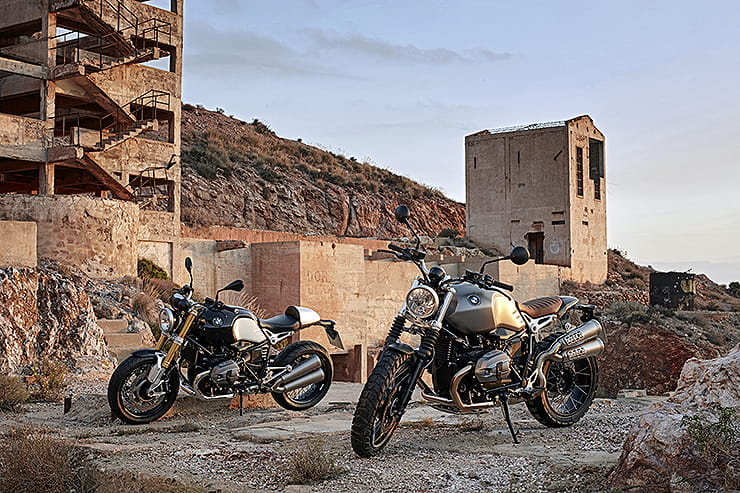 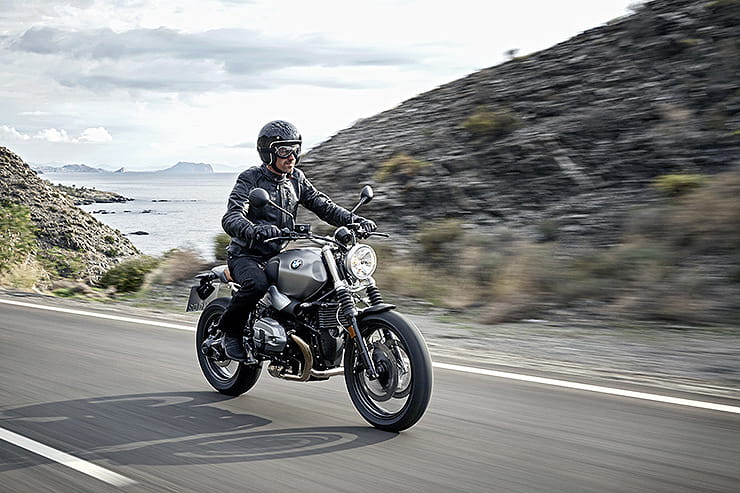 Having released the original R nineT in 2014 (now generally known as the Roadster), BMW were always destined to follow it up with an ‘urban scrambler’ version and, sure enough, in 2016 it arrived. Yep, the most over-used name in two-wheels was plastered on the side of a BMW as the R nineT Scrambler (to go with the Ducati Scrambler, Triumph Scrambler, etc etc...) joined the party and once again, a manufacturer attempted to conjure up some history about off-road success in the 1950s to justify its introduction. However, and this is a key point, BMW were actually very clever with their Scrambler model and made a machine that delivers far, far more than just fashion-pleasing looks – which is why it remains in the line-up where others such as the Racer have failed. Powered by the firm’s air-cooled boxer motor and with a dedicated chassis and lower price tag than the original R nineT model, the R nineT Scrambler makes for a brilliant bike that is immensely good fun to ride, sounds and feels the part and has a very high level of build quality. Can it go off-road? Err, theoretically it can but very few ever will. This is a bike that ticks the ‘cool’ box and is far more suited to an urban environment and weekend tarmac blasts than ploughing up a muddy lane. If you want a fairly relaxed retro with bags of charm, the R nineT Scrambler is well worth checking out.

Brand new BMW asked £10,530 for the Scrambler with cast wheel or £11,090 for the X model, which added spoke wheels, heated grips and a few other accessories. Compared to the £11,900 R nineT it represented quite a saving but there again you did lack a few of the roadster’s blingy bits such as radial brakes and inverted forks. Nowadays prices for the Scrambler start at £7500 in dealerships with private sale models just dipping under the £7000 mark, although few are sold this way. As the Scrambler was never really updated aside from 2021’s tweaks, there is no point worrying about age, buy on service history, condition and cool extras. A brand new model will set you back £11,350 (cast wheels) so you know the upper limit. Aim to spend roughly £8000 and you will get an absolute beauty with great additions such as the wire wheels and possibly an Akrapovic slip-on silencer.

The Scrambler has the same air-cooled boxer motor as the rest of the R nineT model range and this is a major selling point. A really engaging and spirited engine, it has loads of instant drive and a pleasingly raw exhaust note – but it’s no modern motor. Vibey, quite aggressive on the throttle and with a fairly clunky gearbox, it isn’t overly relaxing to use and certainly isn’t a ‘retro GS’ in its feel. Expect an engine that is more ‘old-school’ in its outlook and you won’t be disappointed, assume it will be super-refined and easy-going and you may be in for a shock. That said, thanks to the huge amounts of torque you can happily cruise on the Scrambler and top-gear roll-on overtakes are certainly on the cards, however to get the best from it you need to work it to get the boxer spinning nicely and your adrenalin flowing.

The 1170cc air-cooled motor is absolutely bullet-proof and reliability isn’t an issue on any of the R nineT models. As long as it is serviced regularly (6000-mile intervals with the valve clearances requiring checking at 12,000 miles) you are very unlikely to run into any issues at all. Almost all R nineT models have a full BMW service history and that’s what you need to look for. Pleasingly it’s not a massively expensive engine to get serviced, mainly down to the exposed nature of the heads, however BMW dealers aren’t the cheapest so the bills can add up. Older BMWs do occasionally have issues due to wear and tear such as oil leaks from the shaft drive or even a slipping clutch but very few Scramblers have covered anything like the mileage where these will start to manifest themselves so you should be safe. Just check the paint finish on the motor, a few owners have found it can be a bit poor.

The OE twin-stacked exhaust is actually very pretty on the Scrambler and it isn’t unusual to find it still on the bike, however BMW sold an Akrapovic alternative that can be mounted either in a high or low position and is a bit fruitier, which some owners like. If you want to release a touch more power, aftermarket firms do a new link pipe that removes the cat, which is a good addition and it does boost the mid-range noticeably. In 2021 the Scrambler was made Euro5-compliant through new heads, not that you would really know it (the fins are slightly different), and two power modes as standard with two more optional extras alongside optional engine braking control, cornering TC and cruise control. 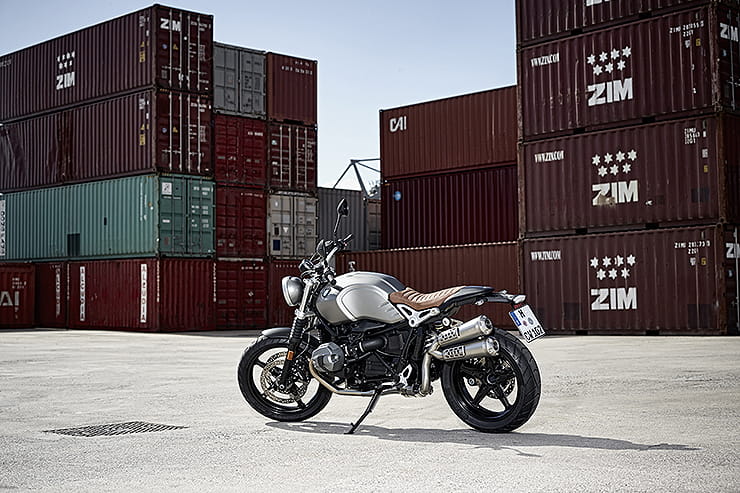 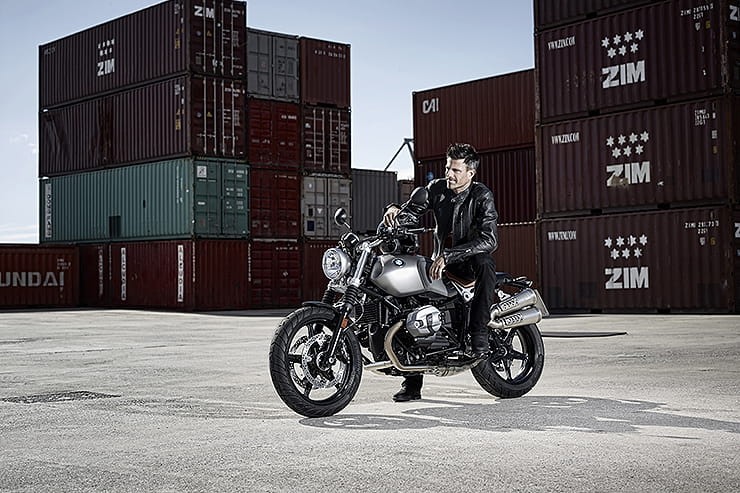 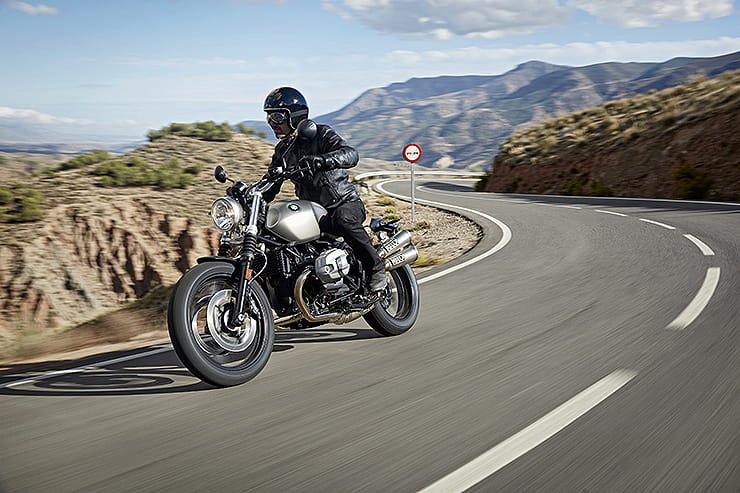 Expect to record low 40mpg numbers from the Scrambler, meaning 140 miles can be squeezed from the 17-litre tank without too much effort. It’s no GS tourer but it is comfortable enough for you to be able to clear this off with relative ease.

Unlike the R nineT, Pure and Racer, the Scrambler has a 19-inch front wheel (the same size as a GS) to give it an off-road look. To compensate for this, BMW also altered the geometry of the chassis when compared to the rest of the heritage range and to keep the costs down fitted conventional forks (with gaiters), which are also on the Pure model. Some would argue this look is also more ‘authentic’ to a retro bike. On the road the Scrambler has that same surprisingly secure feeling you get from a GS and can certainly belt along a twisty road as its lighter weight makes it more agile than the adventure bike. Buyers were given the option of either Metzeler Tourance or Karoo 3 tyres when they bought the bike and to be honest, if you pick the Karoo you are mad. Yes they are way better off-road and look cool, but they don’t do the bike’s handling any favours if you have no intention of taking to the mud. With pleasingly fat tyres, the Scrambler offers bags of grip and the suspension, which lacks adjustment (only the shock can have its preload and rebound adjusted) is set firmly enough to allow you to enjoy a spirited road ride, although some owners feel the rear is a touch too firm. As with the motor, there isn’t much to worry about on the chassis when buying used as there is no ESA to go wrong. Check the shock is ok, inspect under the gaiters to see if the fork seals are good and aside from inspecting for any signs of off-road use (highly unlikely, look for dings in the exhaust under the motor) that’s about all you need to do. Cleverly, like on the R nineT, you can remove the pillion frame from the Scrambler for a solo look, which is pretty funky. If the bike has spoke wheels, look for rust where they meet the rims (unlikely), loose spokes (also unlikely) and dings from off-road use (again, unlikely).

The Scrambler gets the ‘lower-spec’ conventionally-mounted Brembo calipers where the original R nineT has radial calipers (and inverted forks). On a bike such as this it is no issue and ABS is standard alongside braided lines. It is worth checking the brake fluid is nice and clear as contamination can harm the ABS system but that’s about all you need to worry about. If you need more bite, uprate the pads. Cornering ABS arrived as standard in 2021. 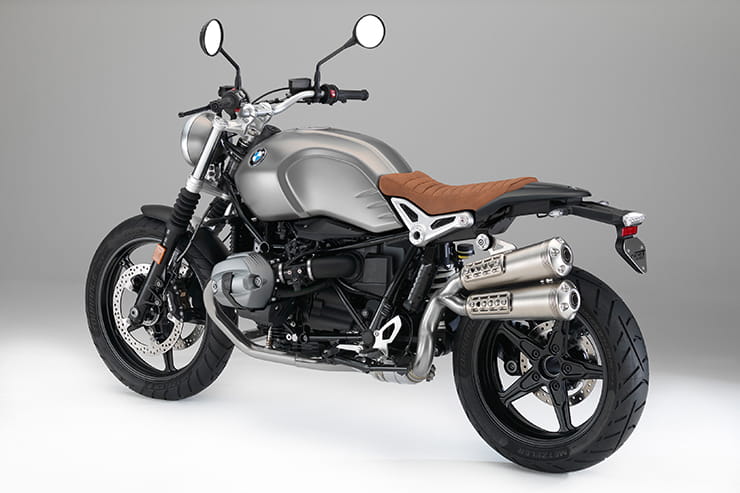 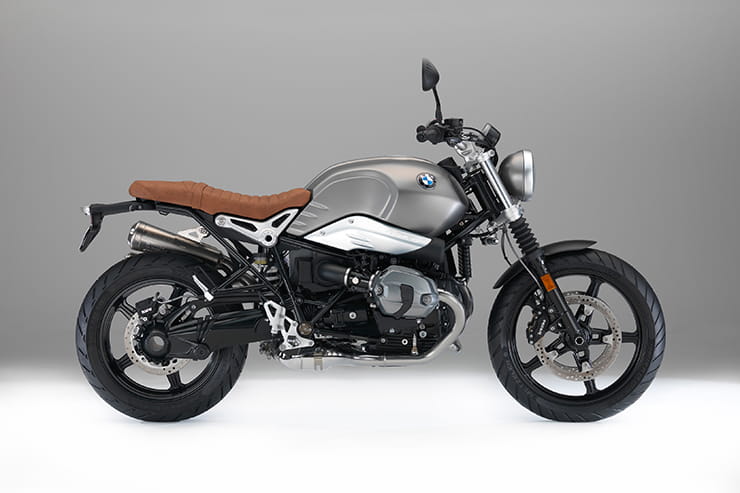 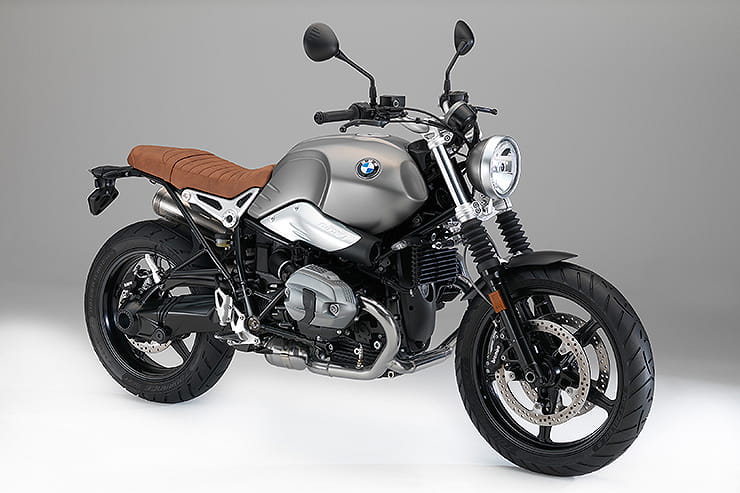 Touring and comfort are a bit of a mixed bag on the Scrambler because in many ways it is like a GS in its attitude and riding position, which means it is comfortable, but it also totally lacks any weather protection so is like a naked bike and therefore not great over distance. BMW kind of acknowledged that riders won’t tour on the Scrambler because you can only get a ‘tank rucksack’ and small ‘rear bag’ for it rather than full-on paniers. And while you can buy a screen, it is pretty small! Very few Scramblers have screens fitted (it’s not great looking) and instead most riders enjoy it on short rides rather than long-hauls.

The Scrambler deliberately has a lack of electronics and although ABS is standard, that’s about it. There is the option to add ASC (traction control) alongside a rev counter, heated grips and LED indicators (all can be retro-fitted) but in terms of rider assists, that’s your lot. When it comes to bolt-ons, however, well that’s where BMW are happy to step up... You could buy your Scrambler with cast or optional spoke wheels shod in a choice of road or more off-road targeted (fashionable...) tyres. Fancy going a bit more minimal? There is a solo seat option and you can even lower the bike if you are a bit short in the leg or raise it if you are taller. Then there is the protective headlight grille, engine guard, Akrapovic sports silencer and more. BMW official accessories do add value to an R nineT, so expect to pay extra for one that has been accessorised with proper bolt-ons but avoid any that have been heavily chopped about. Not many bikes have anything other than official BMW parts fitted.

The Scrambler may be a bit of a ‘fashion bike’ but it is also a really enjoyable machine to ride that has a lovely element of raw spirit and attitude. If you are tempted by the R nineT range, the Scrambler is a great option as it is a bit more relaxed than the Pure, cheaper than the R nineT and way, way more comfortable than the hideous Racer. It’s also more subtle than the Urban G/S, whose brash looks split opinions. Ignore the whole ‘hipster image’ that has been built up around it and instead buy the Scrambler for how it rides, not its fashion statement.

Three things we love about the R nineT Scrambler… 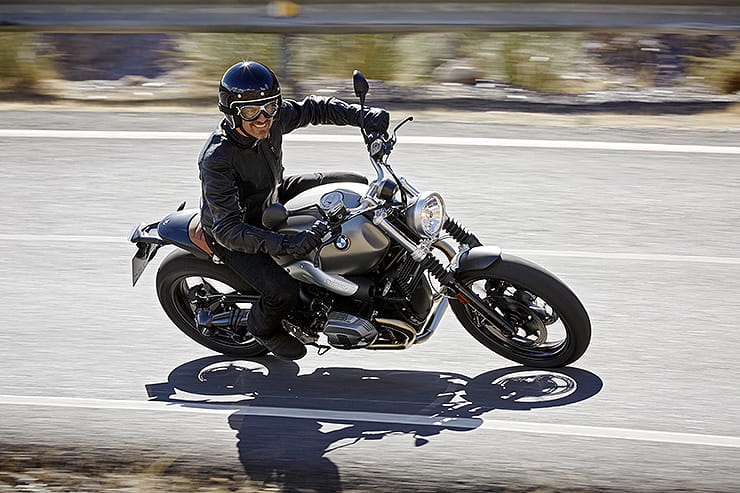 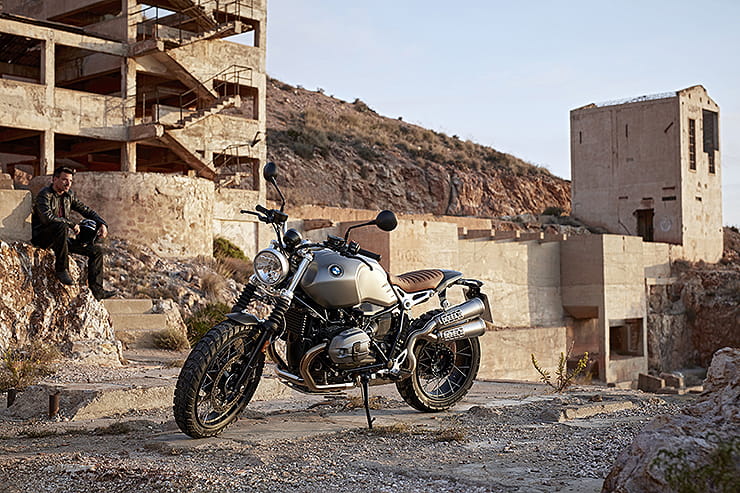 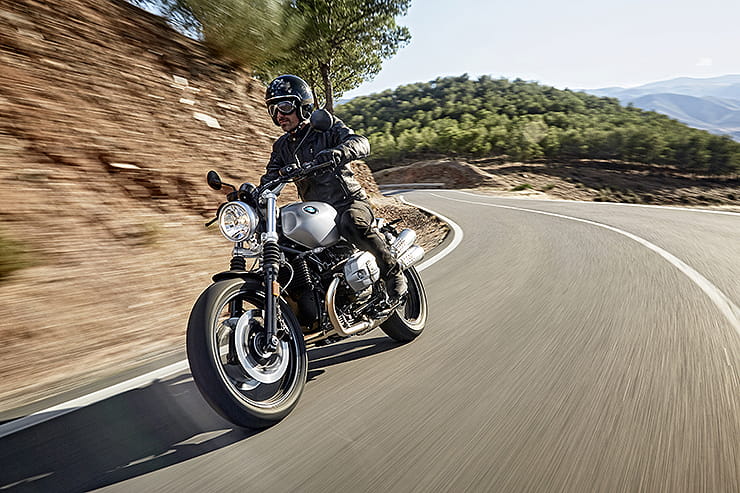