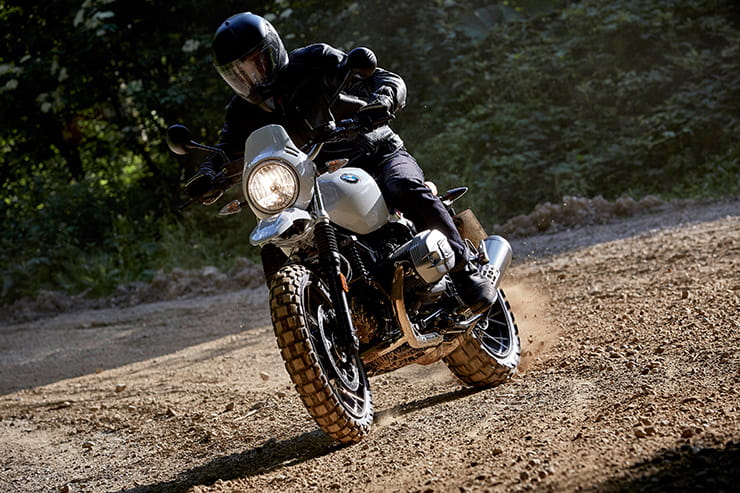 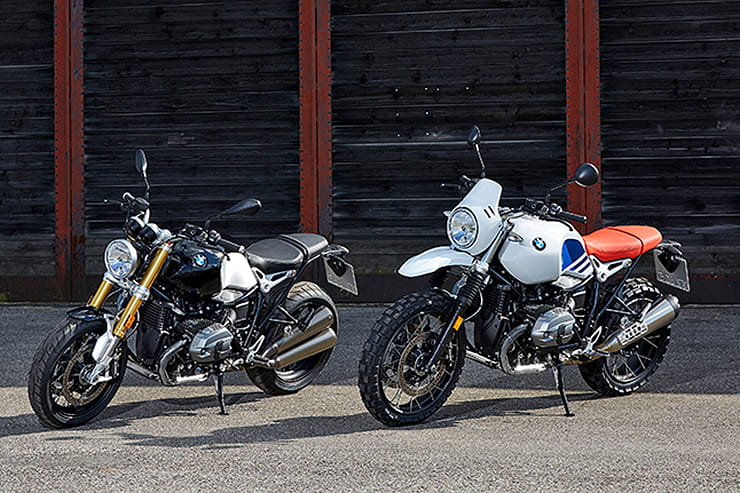 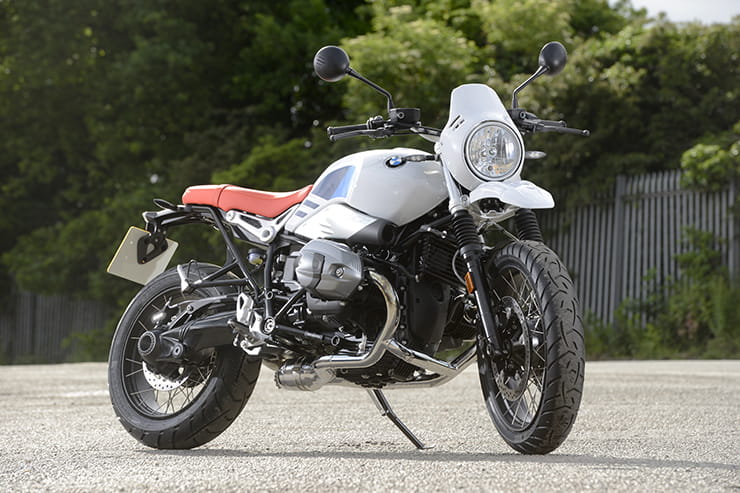 When BMW released their heritage range it was only going to be a matter of time until their most influential, and ground-breaking, model was honoured – and that happened in 2017. Yep, 37 years after the R80 G/S was launched (and saved Motorrad from going bust...)  BMW whipped the covers off the R nineT Urban G/S. And what a looker. With a paint scheme based on the 1984 Dakar celebration model, complete with the cool red seat, the Urban G/S certainly hit the right notes styling-wise. Ok, when you dig a little deeper you discover the Urban G/S is basically just an R nineT Scrambler given a new set of clothes, however when the threads look this good, who cares? If you are after a retro with a cool heritage, funky styling and belting air-cooled motor, the Urban G/S is a great buy.

The Urban G/S was priced a touch higher than the Scrambler model when it was launched in 2017 with the base bike costing £10,550 and the X model, which added spoke wheels and a few other trinkets, costing £11,185. Nowadays you are looking at forking out a minimum of £8000 to buy one from a dealer (nearly every Urban G/S is sold via the BMW network, very few exchange hands in a private sale) with this increasing to about £10,500 for an ex-demo or nearly new example. A 2022 model costs £11,540, so there aren’t huge savings to be had. Ideally, buy it from an authorised BMW franchise as there are various guarantees and extended warranties you can get included in the deal. Not that you will probably need them, the Urban G/S is bulletproof! And don’t be too worried about the updated 2021-onwards version, the changes are virtually impossible to spot when you ride the bike and the styling is identical aside from a few colour options – none of which are as appealing as the original white and red look.

The air-cooled boxer motor is identical throughout the R nineT model range so there are no surprises here. A wonderfully thrilling and engaging motor with bags of soul and a wicked exhaust note, it isn’t the smoothest lump out there and a lot of owners feel it has quite an abrupt throttle response and clunky gearbox, however on a heritage model in many ways this only adds to its character. Absolutely packed full of punch, the motor drives forwards from beautifully low in the rev range and even has a bit of thrill at the top end when you let it rev, not that you will generally be doing this on the Urban G/S. Ride the mid-range, delight in the crackling exhaust note and enjoy the old-school vibes.

The R1200GS was running basically this exact same motor from 2004 until 2012, although the twin-cam head was introduced in 2010, which is the version the R nineT models have. As you would imagine, this means it is a thoroughly tried and tested unit and where GS models (or RTs or any other boxer derivative for that matter...) pile on the miles, R nineT models generally cover far less distance. As long as it is serviced regularly (6000-mile intervals with the valve clearances requiring checking at 12,000 miles) you are very unlikely to run into any issues at all and it is highly unlikely an Urban G/S won’t come with a full BMW service history. The updated 2021-onwards bikes have alterations to their heads to allow them to meet Euro5 regulations and two power modes, but that’s the only differences and aside from a tiny boost to their midrange, both generations feel the same to ride. If you want to replicate the increase, just get a de-cat exhaust system, which makes the engine feel far fresher and also sound awesome! A good visual inspection of the motor should reveal any paint flaking (not uncommon) but that’s your only real worry as the exhaust system is stainless steel and the gearbox, although clunky, very solidly built. 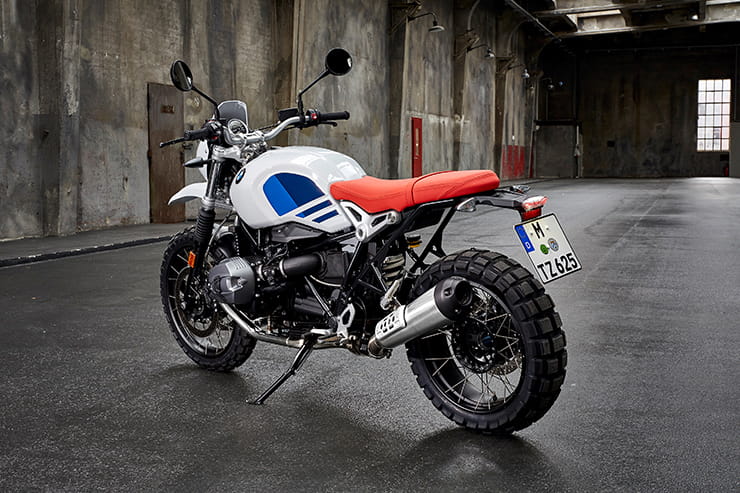 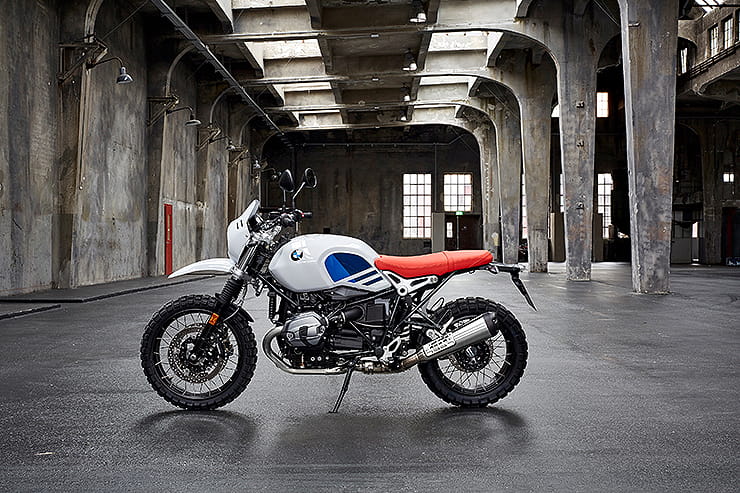 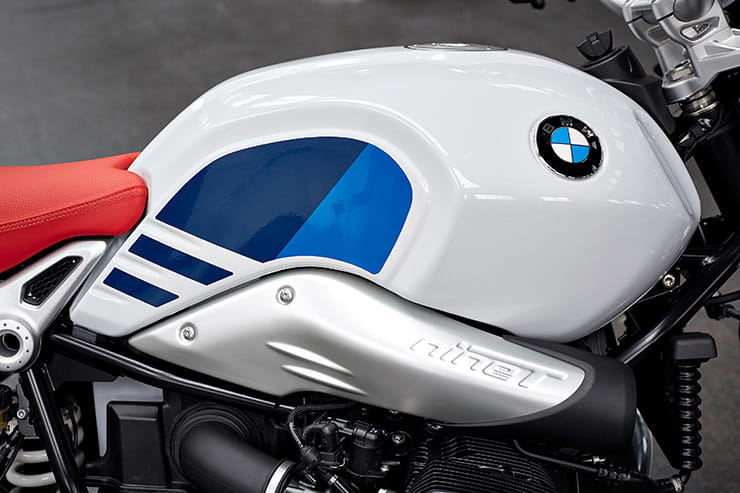 Like the Scrambler model, you can expect to record low to mid 40mpg numbers from the Urban G/S, equating to a range of about 140 miles from its 17-litre tank. BMW claim it can record 53mpg but that’s a touch optimistic.

The Urban G/S has a 19-inch front wheel (like the Scrambler) to give it an off-road look and stance. To compensate for this, BMW altered the geometry of the chassis when compared to the 17-inch wheeled heritage range and to give it a more retro vibe (and keep the costs down) the Urban G/S comes fitted with non-adjustable conventional forks (with gaiters) like the Scrambler and Pure models. On the road you don’t really spot the Urban G/S’s slightly less agile handling when compared to the Pure and it can really motor in the bends. Having spent so many years perfecting the GS’s handling, it is no surprise the Urban G/S is so adept and it is in no small part thanks to the fat tyres, which grip remarkably well. Well, as long as you stick with the more road-targeted Metzeler Tourance option – a few fashion-victim owners fit chunky off-road biased Karoo 3s when they have no intention of taking it off-road, something that ruins its road holding purely for the sake of looking cool. The choice of either cast or spoke wheels doesn’t really affect the handling but it looks way better on spokes. A bike with a tall and wide stance, the Urban G/S has quite a tall seat height at 850mm however the narrowness of the bench seat (which is surprisingly comfortable) means this isn’t too much of an issue. As on the R nineT, you can remove the pillion frame from the Urban G/S, which makes it look ace. If the bike has spoke wheels, always check for rust where they meet the rims, loose spokes and dings in the rim from off-road use but all of these are fairly unlikely. Again, like the engine, it is well built and very solid.

The conventionally-mounted Brembo calipers produce more than enough stopping power and you get braided lines and ABS as standard. On the updated 2021 models the ABS is angle-responsive, which is a welcome safety net but not essential. Always check the clarity of the brake fluid (it should be changed every two years) as any contamination getting into the ABS system can be a costly nightmare if it finds its way into the pump mechanism but aside from this all should be well. 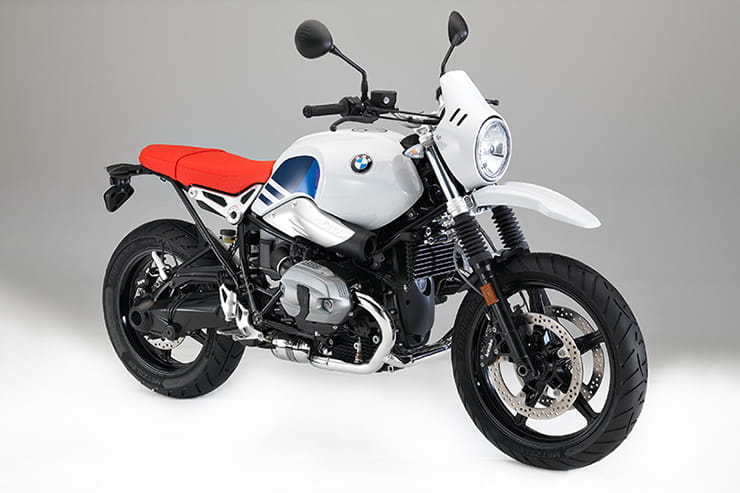 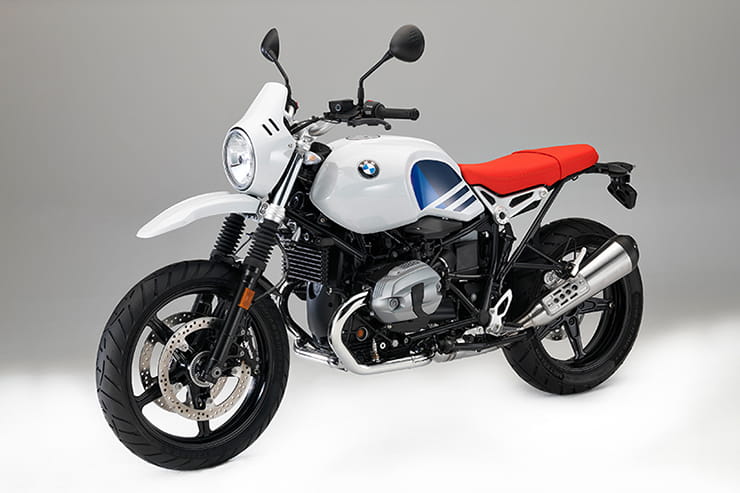 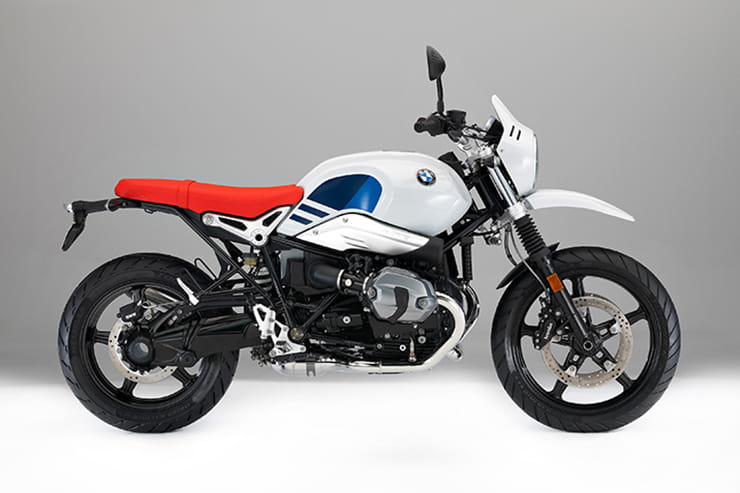 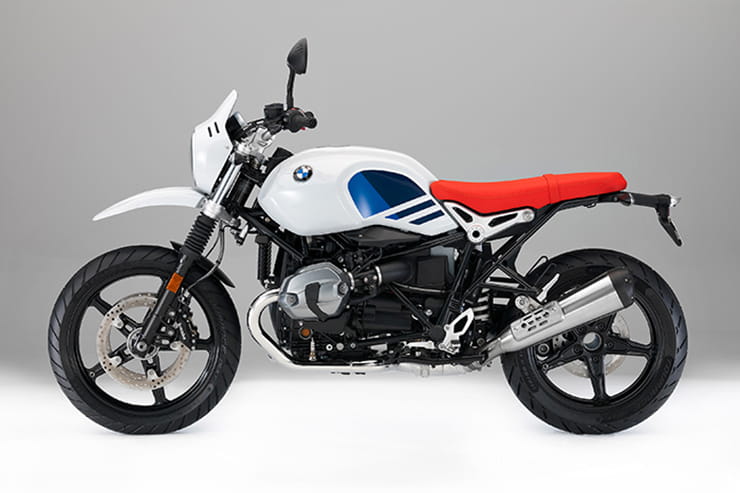 You can ride distances on the Urban G/S but you will always be limited by its firm bench seat and exposed riding position. It may have a small nose cowl, however it isn’t the most effective and the seat is only good for about 120 miles before discomfort starts to set in. Ideally it is a bike for shorter runs (which used bike mileages seem to back up) however don’t be afraid of taking it on a weekend away – it’s a G/S after all!

Despite ABS being standard from the start, BMW have deliberately kept their R nineT model range fairly electronic-free. The option to add ASC (traction control) has always been there alongside the usual heated grips, an alarm and LED indicators but on the Urban G/S that’s about it in terms of electronics. In 2021 BMW did relent a bit and added cornering ABS as standard, TC and two power modes (Road and Rain) with the option of cruise control and an extra Enduro power mode, but that’s as far as they went and there is no TFT dash, option of connectivity etc. Bolt-ons, however, is a different story...

You can buy your G/S with cast or optional spoke wheels shod in a choice of road or more off-road targeted (fashionable...) tyres. Fancy going a bit more minimal? There is a solo seat option, and you can even lower the bike if you are a bit short in the leg or raise it if you are taller. Like the Scrambler, there is also the option of adding off-road style bolt-ons such as the protective headlight grille, engine guard, Akrapovic HP sports silencer and more. BMW official accessories will add a degree of value to an Urban G/S but not that many are heavily modified. Most owners stop at brush guards, a taller screen and maybe a fruitier pipe.

The Urban G/S is a bit more brash in its styling than the Scrambler but that isn’t to its detriment. A wonderful heritage model that has bags of soul, the Urban G/S doesn’t disappoint. The price tag is fairly high at £8000 for a used one but it is a bike you won’t grow bored of that quickly and will always makes you smile when you open your garage door. And this grin will only get wider once you get it on the open road and experience that thumping boxer motor and hear that droning flat twin exhaust note...

Three things we love about the Urban GS… 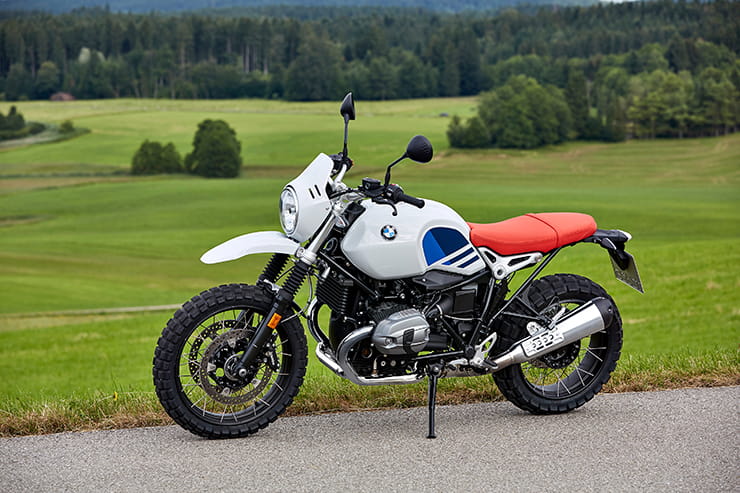 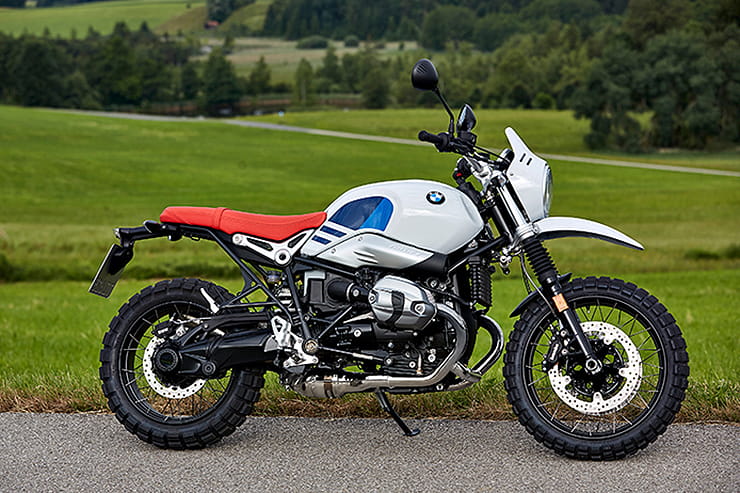 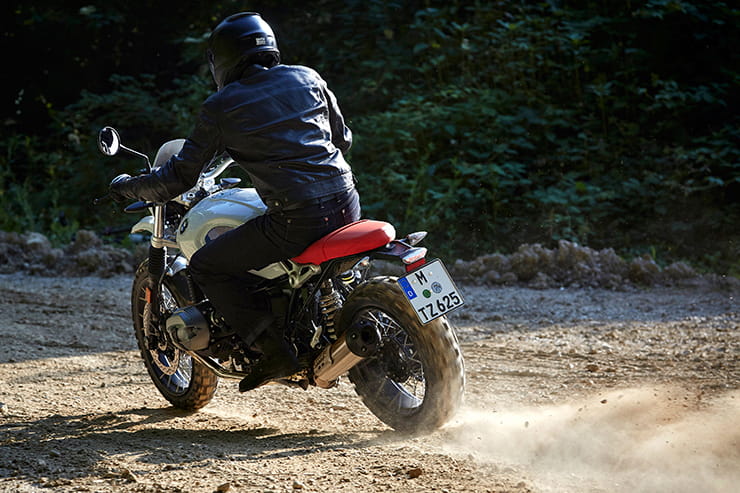