The 2015 Superstock 1000 World Championship that was won by Lorenzo Savadori at Magny Cours last weekend was Aprilia’s 55th world title. An impressive haul.

Its 54th was the 2014 World Superbike title won by Sylvain Guintoli on an RSV4 and the Italian manufacturer has helped the likes of Valentino Rossi, Max Biaggi, Casey Stoner and Jorge Lorenzo to world championships through their careers too.

One thing is for certain, Aprilia have a rich history of creating spectacularly competitive motorcycles that are firmly at home on the track. And for those riders who don’t happen to race in the World Superbike series, thankfully Aprilia created a WSB-inspired, road-going superbike back in 2009; the RSV4.

The latest incarnation, known as the RSV4-RF, which hit the UK dealerships only this summer is a heavily upgraded version of the already superb RSV4. All £18,135 worth of fine Italian gorgeousness. 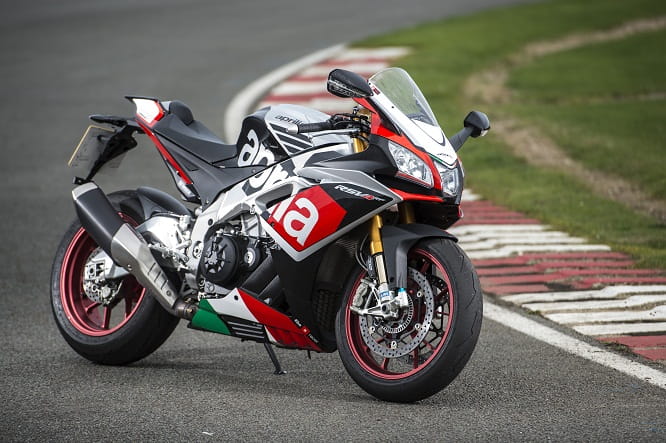 The flagship sports bike from the firm’s Noale factory has rarely threatened its Japanese or even German rivals in the UK sales charts but ride them back-to-back at your local circuit and the Fireblades, R1s and S1000RRs will have to work damn hard to reign victorious over the spectacular RSV4-RF.

In fact the RF is a limited-to-only-500 edition version of the RR, which wasn’t imported into the UK. The RF and comes with the Race Pack as standard which includes lightweight forged aluminium wheel rims and more sophisticated Ohlins suspension (shock absorbers, fork and steering damper). It also has a dedicated ‘Superpole’ graphic.

What we have here is essentially a track machine with a road identity manifested by its lights, mirrors and a registration plate holder.

VIDEO: ON TRACK AT SILVERSTONE:

2015 has been a vintage year for road-going one-litre sports bikes and we've been treated to a bevy. No fewer than five new models are now creating enough (claimed) power to smash through the 200bhp barrier. The RSV4-RF makes 201bhp at 13,000rpm while the other four are the Ducati 1299 Panigale S, Yamaha R1, BMW S1000RR and Kawasaki Ninja H2. Unfortunately for Aprilia, they didn’t have an RSV4-RF in the country in time to make our Superbike Showdown back in June but if they had I would have feared for the others.

The 2015 RSV4-RF is lighter by a few kilos and faster by 16bhp thanks to extensive enhancements to the 65-degree 999cc V4 engine. That’s 65-degrees because anything less wouldn’t fit into frame without consequences. A new airbox, revised variable-length intake trumpets, larger inlet valves and exhaust valves now made from titanium. Narrower gears and lighter forged camshafts add to the 2.5kg weight saving in the engine alone.

A new sump and redesigned crankcases plus a new exhaust system with larger, 36mm (up by 3mm) diameter downpipes. Meanwhile, the swing-arm is longer while the trail has been reduced to encourage faster steering.

Enough about the detail, I need to use this space wisely to wax lyrical about how good this bike is to ride. Even against some of the finest modern-day competition, the RSV4-RF is a class act. 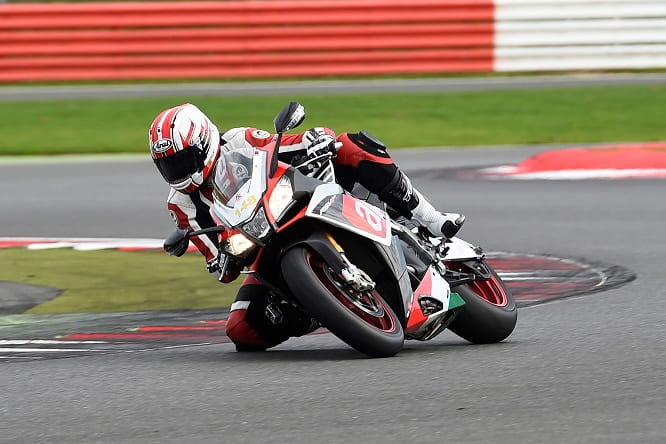 Staggeringly fast off the line yet smooth through the rev range pulling hard all the way to 13,500rpm without any jerks, snatches, sudden power spurts or removal of arms from sockets. You barely need touch the quickshifter as you pop through the gears. The new closer ratio gearbox allows for superfast, super accurate shifting without the use of the clutch. A quick and precise tap each time as the soundtrack of the howling V4 almost negates the requirement for ear defence. Almost.

With the throttle pinned, you tuck in down the Hanger Straight and power towards Stowe Corner at on Silverstone’s International Circuit, touching 170mph as the world flies past.

Out of the bubble, back three gears letting the slipper clutch do what it’s supposed to do – which thankfully doesn’t interfere with the bike’s stability or traction leaving you to concentrate on finding your braking point. Give the right hand lever a short, firm squeeze as the bike sheds its speed while remaining steady as you throw it towards the apex. You can almost feel it willing you on with a big grin across its face telling you to take an extra 1% risk next time round. And you trust it. Everything about it is easy, it does all the hard work for you and makes the most ungainly rider feel like a WSBK superstar…even if the photos tell a different story! 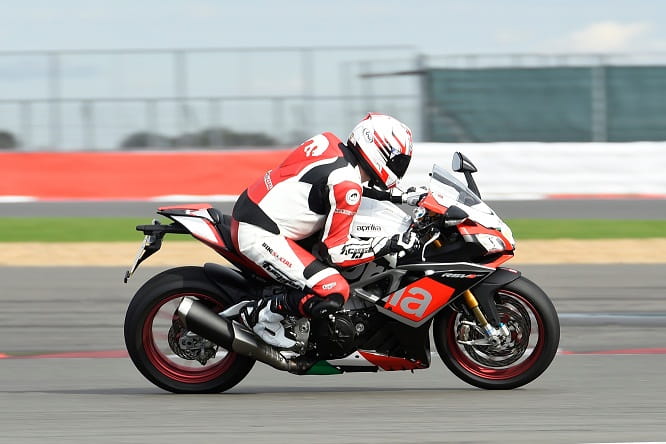 With each lap I leave braking later and later, testing the limits. Pulling harder each time, putting more faith in the powerful Brembo-callipered 320mm twin stainless steel discs. Silverstone offers a tasty variety of fast, medium and then two bottom gear corners. It’s a decent selection to test the epicness of this Aprilia chassis, its handling and more to the point how you can trail the front brake into each without fear.

For most of the day I had the ABS set on the least intrusive setting of the 8 available, which is indicated on the dashboard and can be changed using dedicated thumb controls on the left handlebar. The bike has a Race ABS setting which is less sensitive and I didn’t feel it interrupt once. Engine braking maps correspond with the aPRC (Aprilia Performance Ride Control) engine maps; Sport, Track and Race where engine braking becomes less resistant over 6000rpm.

Aprilia are particularly proud of their electronics package. And so they should be. It’s a simple system with relatively easy-to-operate menus and settings via the display. Easy enough for me to understand without the instruction manual anyway.

Among the options are settings for aTC (Aprilia Traction Control), aWC (Aprilia Wheelie Control), aLC (Aprilia Launch Control) and aQS (Aprilia Quick Shift). Then if you really want to get Full Factory Tech Nerd on your track day chums, there’s an app to download which enables the user to download all kinds of MotoGP-style corner-by-corner data. 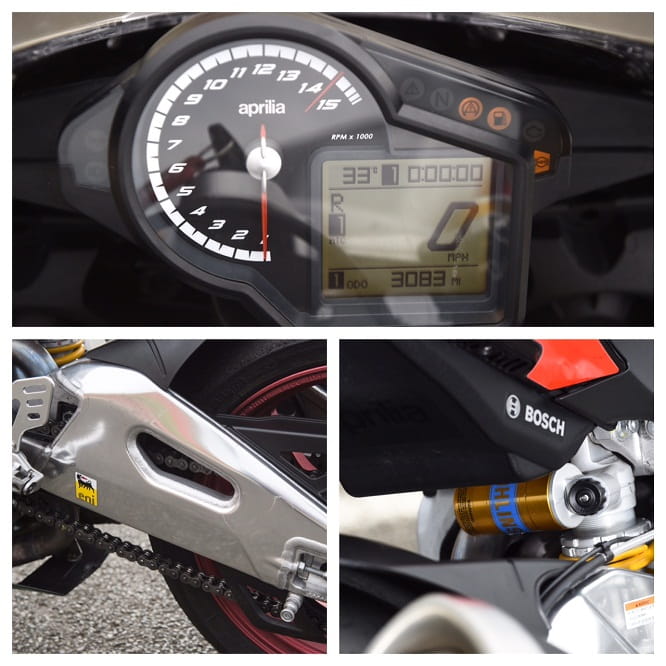 In its standard, straight-out-of-the-showroom setting the suspension is a little soft for track riding. By that I mean the bike squats at the rear under hard acceleration allowing the front to lift and waggle its head. After Chief Mechanic-for-the-day Daryl of IDP Moto added a touch of compression and took some rebound out from the rear Ohlins shock and preload from the front set of Ohlins forks and I was able to carry more speed, momentum and importantly confidence.

Handling is sublime – the chassis is strong, the steering light, direct and comfortable while the grip from the Pirelli Supercorsa SPs is almighty even at lower temperatures. The bike almost knows where it’s going, sniffing the racing line like an anti-drug smuggling dog at a passport control queue.

Change of direction is also one of the RF’s party tricks. With its super sexy concoction of Pirelli, Bosch, Ohlins and Brembo’s mixed in with the magnificent chassis, 180kg dry weight and 200+bhp there are very few road-legal motorcycles that can challenge the Aprilia for supremacy in this category, possibly a stiff R1.

Every single one of those two hundred plus horses are put to good use as the bike glides effortlessly around Silverstone at on the iconic venue’s bike track days. Given its limited numbers in the UK, the Aprilia gets plenty of admirers while parked in the garage between sessions. “What’s it like to ride on track?”, a GSX-R owner asks. He took one out the previous week for a 10 mile test ride around their local town – talk about fish out of water. The RSV4-RF is a comfortable, small superbike. Versatile, yes, and while you won’t regret commuting or town riding, this isn’t what it was built for.

For a full and special treat get to a track day and feel what this bike does best. It’s one hell of a looker and priced amongst its nearest rivals; at £18,135 the Aprilia is cheaper than a Panigale S and Ninja H2 but more expensive than an R1 and S1000RR. If we’re going to picky then the quickshifter is missing an auto-blipper on the downshift which would have been a refined touch. 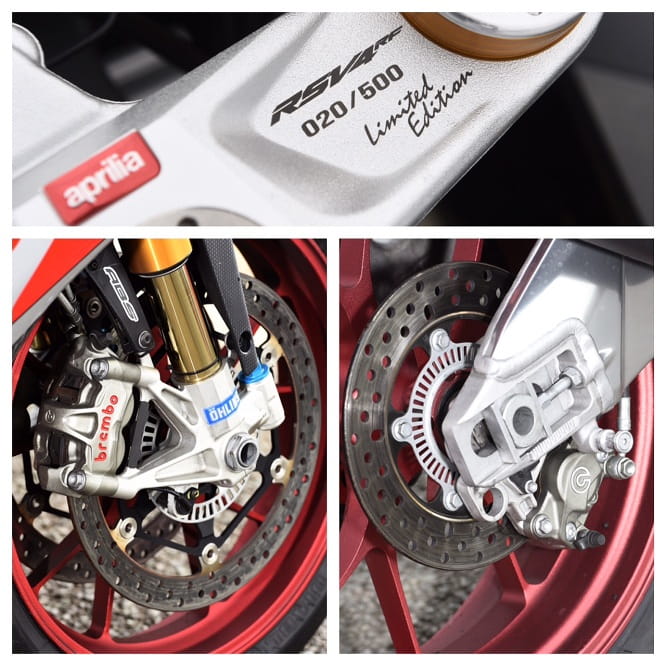 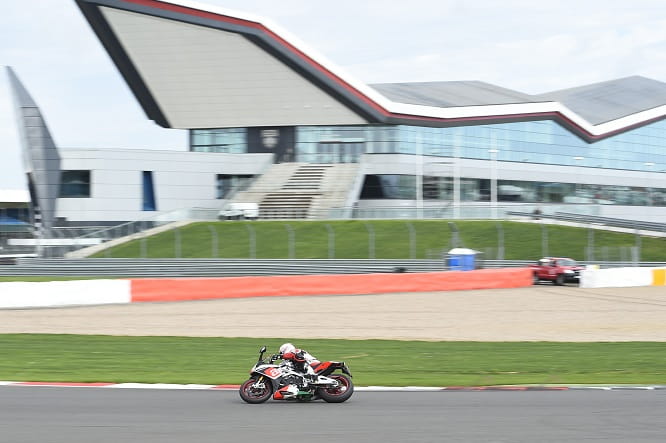 Massive thanks to Silverstone for letting us loose on the International Circuit. Click here for more information on their Bike Track Days.